Cycling the D-Day Beaches of Normandy

They're among the most famous war sites in the world – Andrew Sanger has this guide to cycling the D-Day Beaches in Normandy. 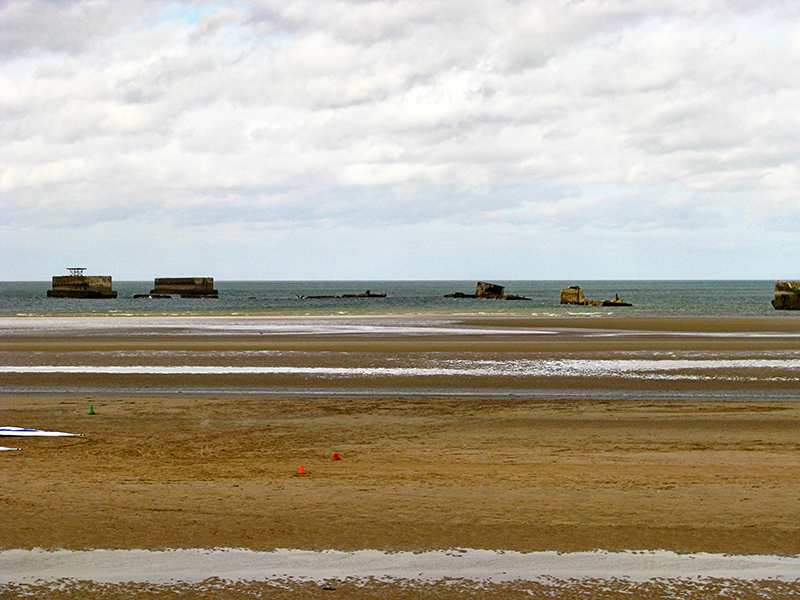 More on the D-Day Beaches

Yet Normandy also means D-Day, June 6, 1944 – that fateful day when 150,000 British, Commonwealth and American troops appeared from the sea at dawn and waded ashore directly into a torrent of German gunfire. So began the onslaught that ended the Second World War.

Within a month of D-Day, about one million Allied troops had landed on these sands. By then, some of the most dramatic battles of the war were raging in the fields and farms and market towns behind the coast.

The scene is so peaceful now, it seems almost impossible. Except, that is, for the memorials and museums along the length of the Landing Beaches, together with massive German defences, some almost intact. Most poignant of all are the neat military cemeteries.

The D-Day Beaches by bicycle

This is rewarding cycling country. There’s a lot to see, as well as a lot of think about, and the wide, airy beaches under big skies are beautiful and inspiring. In parts there are small resorts – especially on the Riva Bella, near Caen – where children play, and families gather mussels. In other parts the coast remains quite undeveloped.

The whole distance is divided into five different Landing Beaches, each with its own character. All are easily accessible by bike (download detailed maps here). The terrain varies from flat coast roads that run for miles beside the shore, to more challenging sections in the undulating green hinterland behind Omaha and Gold beaches, which in places rises steeply from the seafront.

The ride is mainly on quiet paved roads. From Riva Bella to Grandcamp-Maisy, stay on D514 – or, if you prefer, unmarked tracks that run parallel over dunes and clifftops. From the town of Carentan, rustic D913 leads to Utah Beach. 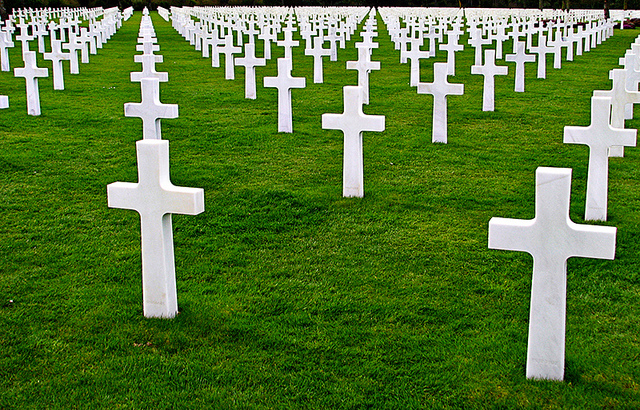 It’s essential to allow plenty of time for inland detours, including longer visits to Caen and Bayeux. These two towns make good bases, with a range of accommodation options, plenty of restaurants and world-class sightseeing.

Sword Beach is the most easterly of the Landing Beaches, beside the Orne river estuary. British troops landed here and fought their way towards the nearby bridge over the river. There a thrilling and decisive action had taken place during the previous night, when airborne troops, using gliders, landed right beside the bridge and captured it.

The successful airmen promptly renamed the bridge after their own regimental insignia, the mythical Pegasus. They also liberated the café beside it to tend their wounds and have a celebration drink.

The café is still in business and the original Pegasus Bridge lies in the museum across the road – both are a must-see. The seafront road (or parallel pathways) reaches Juno Beach, taken by Canadian troops, then climbs inland briefly before descending to Gold Beach. Another British landing point, this is where the artificial ‘Mulberry Harbours’ – the pieces towed all the way across the Channel – were assembled under the Germans’ eyes. Huge concrete vestiges still lie in the water and on the sand beside the small resort of Arromanches. There’s an excellent museum by the beach.

Towards Omaha and Utah beaches

For 20km from here to Omaha Beach, the route climbs up and down steep slopes. A marked cycle path on the clifftop goes to the huge Longues-sur-Mer German gun emplacement, a daunting sight with weapons still in place.

The coast below the village of Colleville-sur-Mer is Omaha Beach, where the Americans took on the toughest challenge and incurred the biggest losses. Rows of pristine white graves at Omaha Beach American military cemetery, which features in Spielberg’s brilliant film about the Normandy Invasion, Saving Private Ryan, are testimony to their courage and self-sacrifice.

Utah Beach, 20km from Omaha by sea, is more than twice as far on land as there is no way to cross the Grand Vey bay except via the inland town of Carentan. Utah is a long, straight expanse of undeveloped waterfront. At one end stands a fine Navy memorial and a small D-Day museum. A landing craft beside the museum vividly conveys what the troops had to endure.

To aid the Utah Beach landings, airmen were dropped during the night to weaken German defences. One unlucky soldier landed on top of the village church at Ste-Mère-Eglise, his parachute tangled in the tower, and at dawn was suspended in full view of the Germans. A dummy parachutist hangs there to this day, the strangest of all the D-Day memorials.

Andrew Sanger is the author of more than 40 guidebooks, including the Footprint guide to Normandy (UK, US) and the Footprint pocket guide Normandy Coast (UK, US).

Getting to the D-Day Beaches

Brittany Ferries has services to both Caen and Cherbourg. For other ferry options to the north of France, see our ferries to France page. For information on travelling to Normandy by train, see our French bikes and trains page.

Bike hire and accommodation for cycling in Normandy

See our Normandy bike hire listings here. For bike-friendly accommodation, zoom into our map below.

Andrew's route along the Landing Beaches follows minor roads (mainly D514 in Calvados départment and D913 in Manche) and at the time of writing (January 2014) had not yet been designated an official cycle route (except at Arromanches). It will eventually for part of the long-distance Eurovélo route 4.

This 'historical trail' is made up of six routes from Utah Beach to Ste-Marie-du-Mont and six stages linking Gold Beach to Arromanches. Detailed maps of each stage of the ride around the peninsula can be downloaded here from the Normandy Tourism website. We have more information here on the D-Day Beaches to Mont St Michel cycle route. We also have this Reader Q&A with links to books and maps that are handy for cycling the D-Day Beaches.

The Normandy Tourism website is a good starting point for information on commemorations during 2014 to mark the 70th anniversary of the D-Day Landings, while Britany Ferries also has this useful page. You might also be interested in our article on cycling the Somme. See also here for some poignant war history in the French Ardennes.

Other resources for cycling in Normandy

See our overview here of cycling in Normandy, we also have this page on useful maps and links. See also our overview of the Tour de Manche bike route, which crosses Normandy and Brittany.