Cycling the Via Rhona from Geneva to Belley

The ViaRhôna will eventually link the Swiss Alps to the Med. Richard Peace rode the stretch from Geneva in Switzerland to Belley in the French Alps.

The Via Rhôna is a cycle route that has been slowly taking shape over the past few years under various guises and rebrandings (e.g. Lac Léman à La Mer) but now appears to have real momentum behind it.

There are still many interim sections (ie often on roads with moderate levels of traffic) and some completely traffic-free high quality sections, often alongside the remarkable Rhone river.

I had a 'fixed base' break in the lovely village of Seyssel and explored the section between Geneva (the very start of the route is in French-speaking Switzerland) and Belley.

The scenery along the way is a mixture of dramatic river gorges and alpine scenery (actually the Jura mountains – smaller precursors to the Alps proper but with their own distinctive flora and fauna and a much more cycling friendly climate) and very rich agricultural land.

Once very quickly out of Geneva there is little in the way of urban development and traffic is generally light or non-existent on traffic-free sections.

Much of the route runs along the departmental border between Ain to the west and Haute Savoie to the east. Both areas provide some good contrasts to the Via Rhôna; towards Ain the long limestone ridges of the Jura gradually give way the much gentler pastureland and a remarkable area littered with tinylakes north-west of Pérouges.

Heading east into Haute Savoie and the landscape becomes increasingly challenging for cyclists as you gradually climb towards the Alps (though there a few good valley bottom cycle routes, some even traffic-free).

Ain is much more the 'tourist 'ite' area, comparatively little visited, even by the French, whilst the Alps of course attract adrenalin sports addicts and sightseers from around the globe.

Geneva itself goes by a number of very attractive unofficial names; the city of gardens, the city of peace - that don’t disappoint expectations. With a magnificent lakeside setting and around 20% of its area being gardens it’s great for strolling or biking around and taking in the sights.

Pride of place must go to the waterfront however, with its small yellow ‘mouette’ taxi boats, large leisure steamers and the incredible ‘jet d’eau’ water jet. On a clear day Mont Blanc is visible in the background. It's also forward looking in transport terms, with plenty of cycle lanes and cyclists, though as in any major city caution is needed as you get used to signage and street layout.

The village of Seyssel also proved to be a fantastic base, right on the Via Rhôna. Two villages with the same name are divided by an elegant suspension bridge across an attractive section of the Rhône.

Smaller Seyssel Ain is on the west bank whilst most of the services are in slightly larger Seyssel Savoie on the east bank. A wonderful slice of French village life with a small, attractive swimming lake and cafe near Seyssel Ain. 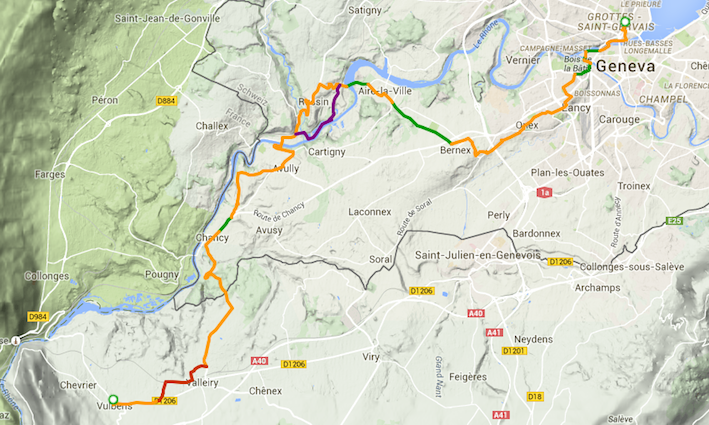 Geneva to Vulbens, 33km. Click for official website and interactive map. Green sections are dedicated cycle paths, yellow sections are shared roads, and red sections are provisional sections of the route, which is still under contruction (Oct 2014). Purple sections are alternative routes. The entire route will eventually link the Swiss Alps to the Med.

The route follows the Rhône closely in numerous places and the sheer scale of the locks (it is canalised in places), barrages and gorges are a real highlight.

After negotiating the busy traffic by Geneva Cornavin train station pretty lanes lead quickly to some glorious river Rhone-side lanes and tracks before ascending over the wooded parkland of Bois de la Batie.

The quiet, attractive suburbs of Lancy, Onex, Contignon and Bernex nudge up to the surrounding countryside before a breezy descent on a fine traffic-free section down to the Rhone. 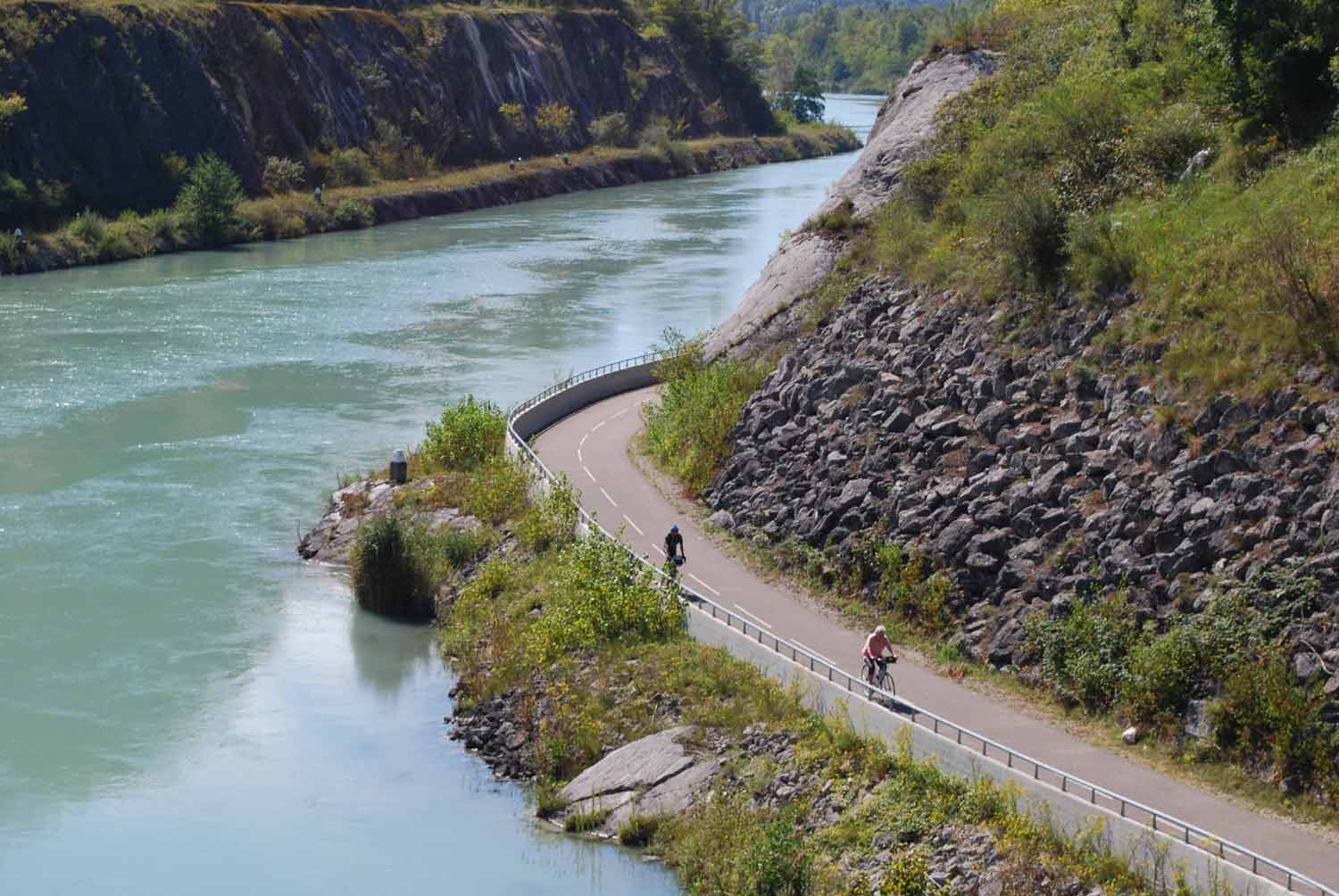 A traffic-free section of the route along a Rhone near Belley. Photo: Richard Peace

Just over the Rhone at Aire-la-Ville you have an off-road option that is stony and narrow in places but avoids the road climb to Russin. You climb steadily away from the Rhone through a string of villages to the regional centre of Valleiry (train to Bellegarde and Seyssell Corbonod possible from here if you wish to avoid the following tricky road climb away from Fort de l’Ecluse).

After Valleiry comes the hardest though one of the most spectacular parts of the route, a road with some fast traffic on it descending to a gorge on the Rhone with views across the river to Fort l’Ecluse, a castle seemingly clinging by its fingernails to the precipitous slope across the narrow gorge. 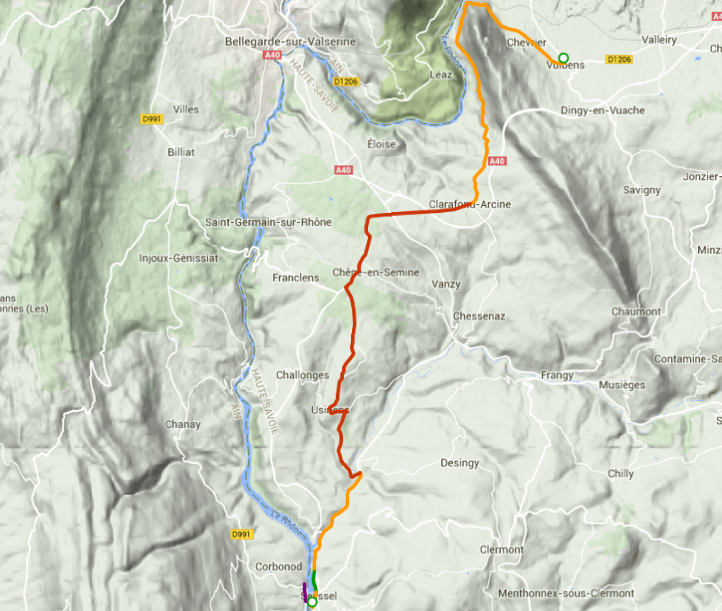 Vulbens to Seyssel, 27km. Click for the official interactive map.

The long climb out affords a great view at Arcine but beware of the quarry traffic on this road. The traffic drops away once on the D331, crossing a wonderful alpine plateau towards Usinens. Drop down over the river Usses to follow roadside cycle lanes into picture postcard Seyssel. 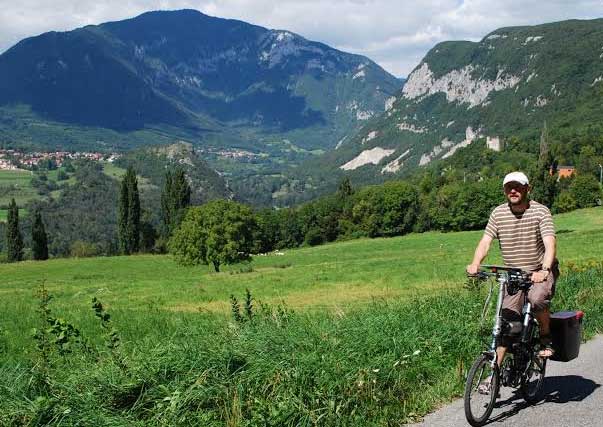 Richard on the route near Arcine.

A lovely cycle lane leads along the river to rejoin the road just before the spectacular Fier gorge (a short side trip - see below). The temporary section down to Culoz is on quite a fast and hilly road and an unofficial valley bottom route exists though on a very stony track (mountain bikes or hybrids with wide tyres only), accessible by detouring through the outdoor leisure centre at Fier (Espace Sports et Nature du Fier).

Just past the huge locks of the canalised Rhone up to your right head back onto tarmac across the base of the hydroelectric dam and left into Culoz on the D992 (some care needed). 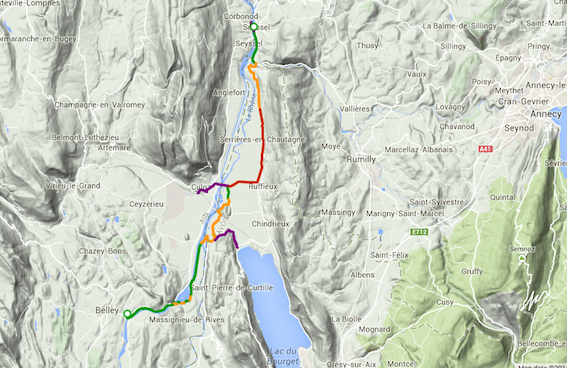 Seyssel to Belley, 33.5km. Click for the official interactive map.

For the main route via Serrieres-en-Chautagne follow the cycle track from the little pleasure port in Seyssel Savoie, along the river until it ends at the D991 where you go right over the River Fier.

The following lengthy road section is largely on quite narrow roadside cycle lanes and features some moderate climbing. This section through Serrieres-en-Chautagne is provisional and a quieter route nearer the river is due to be developed, away from the rather busy and fast road. 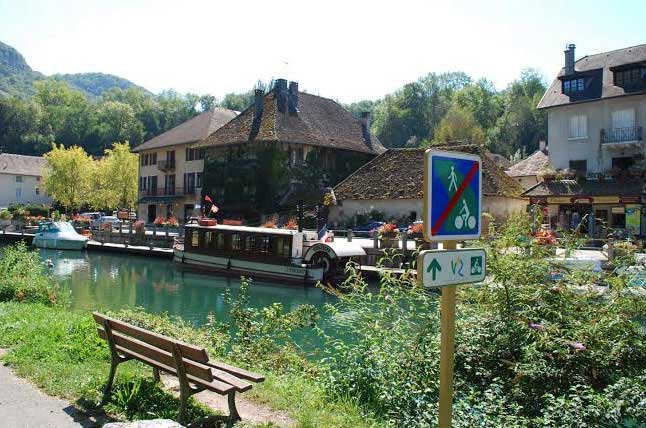 Taking the D904 towards Culoz you are soon on a wonderfully easy and picturesque section mixing high quality traffic-free route with tiny rural roads to Chanaz, a wonderfully unusual tourist attraction based around canal and pleasure boating, from where navigation is simply a matter of following the tarmac cycle track, often with panoramic views of the Rhone, hemmed in by rocky gorges or widening out to lake size areas backed by alpine scenery. Chanaz to Belley must be a candidate for the finest family-friendly cycle ride in the whole of France!

More information on the Via Rhona 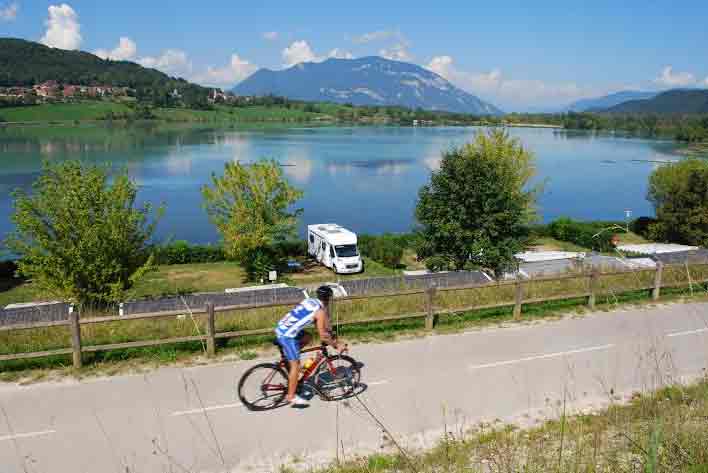 This section of the ViaRhona north of Belley must rate as one of France's most spectacular traffic-free bike routes. Photo: Richard Peace

Total distance for the Via Rhôna is around 700km, dpending on your route options. The stretch from Geneva to Belley is 93.5km. See www.viarhona.com.

Train access: TGV Lyria from Paris Lyon to Geneva. Bike spaces are available but must be reserved in advance with your ticket and a reservation fee is available. Bagged or folded (bagged) bikes can be carried as normal luggage if not exceeding 120cm x 90cm. Local stations at Valeiry, Bellegarde, Seyssel and Culoz. See the voyages-SNCF website for tickets information and timetables.

Signing: In Switzerland signing is generally very good, following the Rhone route no 1 signs in the ubiquitous Swiss national red and white design. Also signed as Via Rhona. Off-road alternative options helpfully signed with a little mountain bike logo. In France the signing is the usual green and white often with a Via Rhona logo.

Cycling hotels, B&Bs and chalets in the Alps