Climbing Ventoux on a Brompton

Paul Lamarra tackled the Giant of Provence, Mont Ventoux, on his folding bike. Here's how he got on. 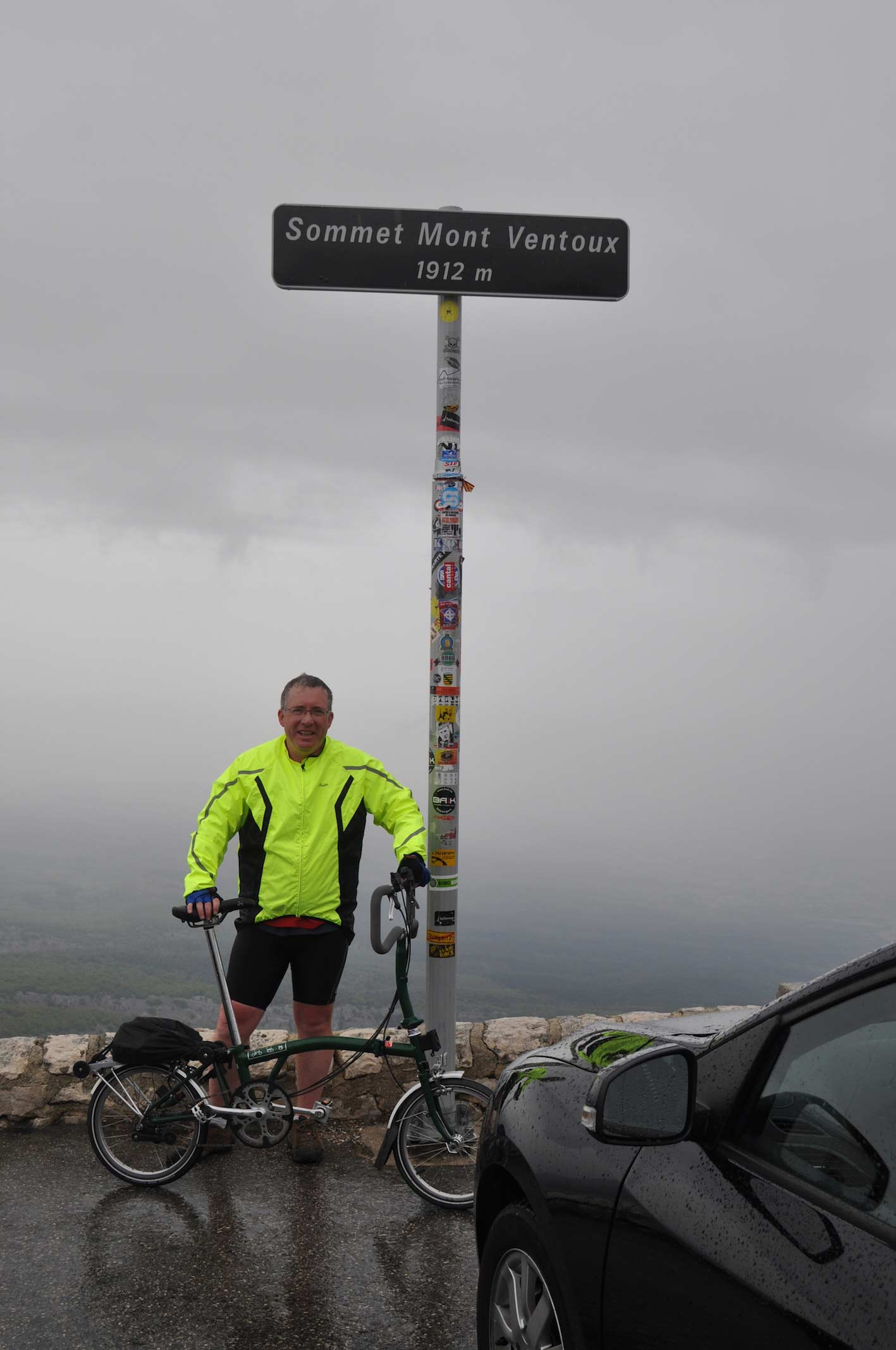 Once I had agreed to cycle up Mont Ventoux there was no backing out of it. It was my first attempt at a big Tour de France climb on my Brompton and I worried that I would just look stupid or, worse, not make it to the top.

Added to that when I set off from Sault to the east of the mountain, the conditions could not have been worse. There was lightning cracking overhead and it was raining something fierce.

On my Brompton, among the shaved legged racers I felt as though I had turned up at a party in bermuda shorts and a Hawaii shirt only to find that the dress code was formal. The small wheels did not go down well with the good guys.

I persevered and reached the Chalet Reynard. There, I spent about an hour sheltering from a storm.

When I eventually set off I was shivering and I really did question whether I was going to make it.

The rain abated but the wind was strong. There was not a scrap of shelter. In strong sun, however, I can only imagine that is much worse as cycling up through those hillsides of bare white rock must be akin to being oven cooked.

Attitudes changed however. Motorists pulled over and got out to clap and cheer. They turned up their stereos, rolled down their windows and chanted “Respect.” I was transported to the peloton. Nonetheless they didn’t paint my name on the road.

It made matters worse in that I badly wanted to stop. However first gear on the Brompton P6’s limited range was low enough and I was able to keep going. I even overtook a couple of fellas.

I got a huge cheer at the top. Some of the good guys for some reason did feel that they had to deliver a stern admonishment despite my efforts, though fortunately I did not understand a word. 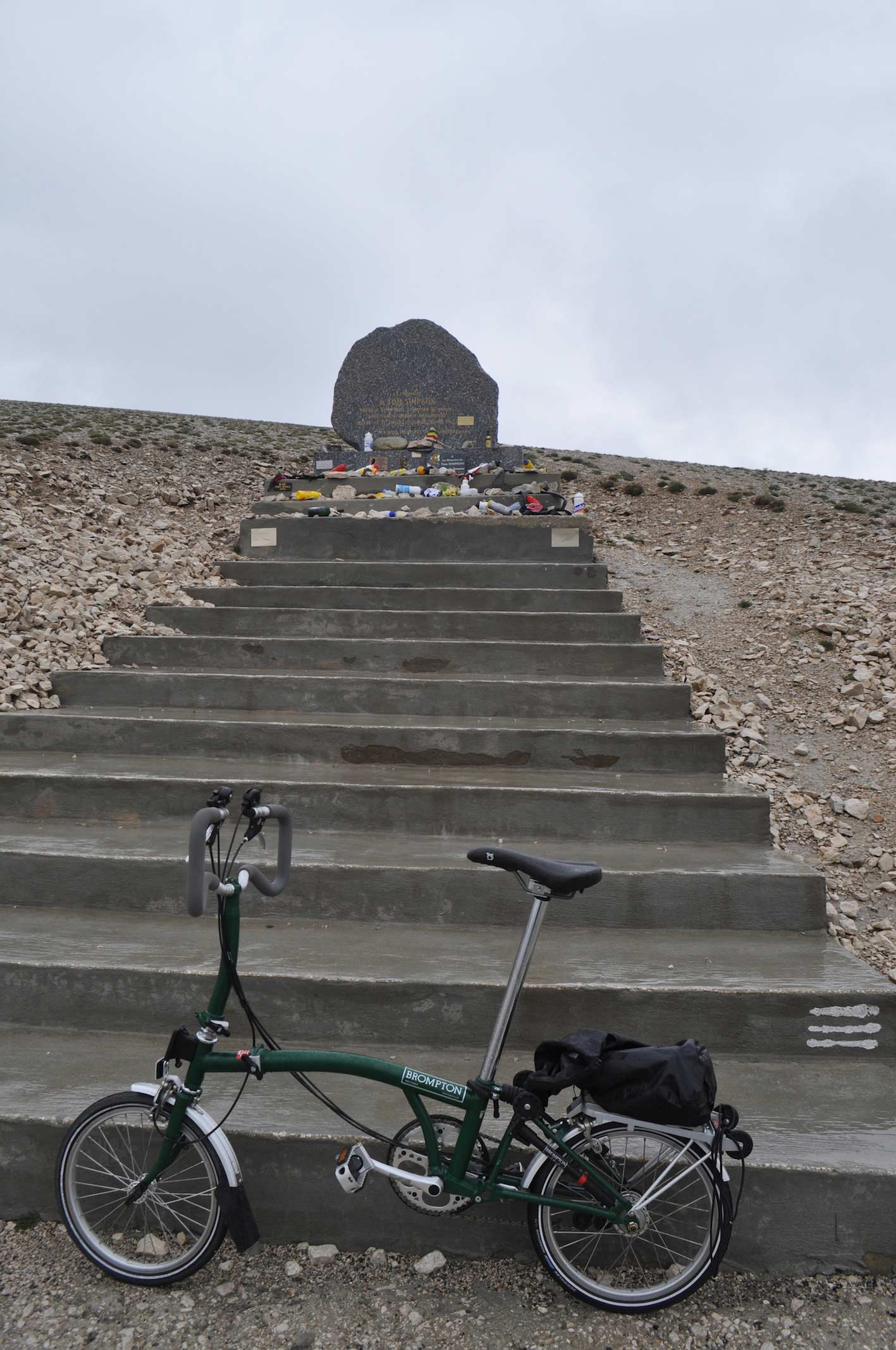 On the way down I almost passed out with the cold and every extremity was numb. My forehead was in agony. When I went to climb the steps into the Chalet Reynard, I wobbled and only stayed upright because someone caught my fall.

I continued down to Bedoin, which was a long time coming. The way down I think was harder that the way up. Yet the bike coped and the brakes I had been warned might not be up to such a sustained and steep downhill (very glad I did not set out from Bedoin) did not let me down.

Ascent from Sault. Average gradient 4.6%; peaks at 10% once beyond Chalet Reynard and especially close to the summit. Distance to top: 26km. Height gained from Sault: 1200 metres. GPS and mobile iPhone stopped working on the way down so no GPX file (but they did recover).

How to get there? I travelled with Voyages-SNCF from London to Avignon via Lille. Prices start at £119 for a standard class return.
Local train from Avignon to Cavaillon (need to change stations from Gare Avignon (TGV) to Gare Avignon-centre – 3km shuttle bus available). Eurostar run a direct service from London to Avignon in the summer months. See Voyages-SNCF to book.
I took a taxi from Cavaillon to Aurel. Very expensive – around €150 one way.

Cycle shop. I managed to shred a tyre the day before. Albion Cycles in Sault collected the bike from the hotel at Aurel and returned it to me the next morning with a brand new Schwalbe Marathon tyre fitted. A bargain at €25.

Paul Lamarra is an award-winning journalist who has been writing about cycling for more than 15 years. He is the author of Ultimate Scottish Cycling and contributing editor at France magazine. He is an occasional contributor to the London Times and Adventure Cyclist.

Paul stayed at the Le Relais du Mont Ventoux in Aurel. It's a charming hotel run by a lovely couple who understand cyclists’ needs completely (especially on the food front). Dinner and breakfast on the terrace across the road from the hotel with great views.

See more options for Provence below.

See our Ventoux cycling overview, plus top tips for cycling Ventoux. There's also this on cycling Ventoux from Crillon le Brave. Details of several other cycling routes on Mont Ventoux to be found at www.destination-ventoux.com. See also our overview of cycling in Provence. For bike hire, see here (for electric bikes see here)