Cycling on the edge of Paris – In search of Van Gogh, Pissarro and other great masters

You don't have to cycle far out of Paris to escape the crowds. Parisian Mark Cramer heads off in search of Van Gogh to see world renowned works of art in peaceful surrounds. 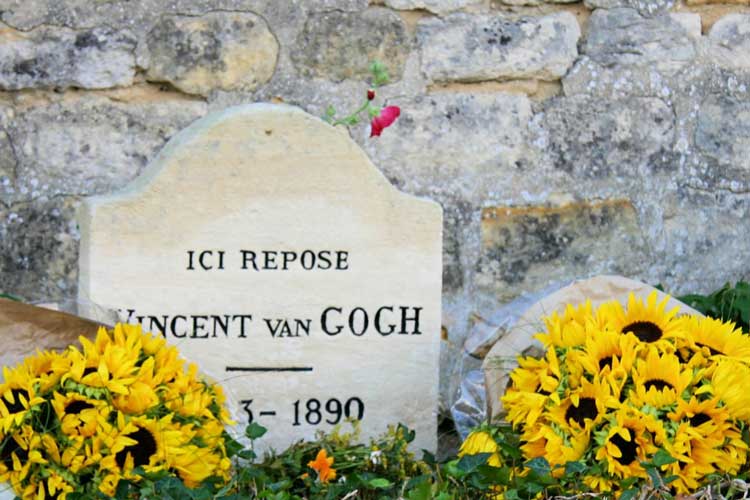 Sunflowers rest on the tombstone of Van Gogh in Auvers-sur-Oise cemetery.

When cycling enthusiasts live in a city, sooner or later they will long for the end of that city, where the real country begins. Even when that city is Paris, we still yearn for a way past the edge and onto the open road.

Someone needs to question the meaning of “city limit” because with today’s sprawling urban-scapes, the edge of one city is often just the beginning of another. To get out of a city, you need to confront suburban congestion and then cycle through exurbs.

But only 30 kilometres to the north of Paris, the real country begins at a line that is traced by the north ridge above  the Oise River. This extended cliff is marked by important moments and monuments in the lives of Camille Pissarro in Pontoise, Vincent Van Gogh in Auvers-sur-Oise and Honoré Daumier in Valmondois. Those are the marquee names of these towns, but along the way you also partake of scenes from Corot, Cézanne, Daubigny, Signac and Vlaminck.

By bicycle along the lightly-travelled Departmental Route D4, you can take in historical landmarks of all three of these great artists within a distance of only 13 kilometres. For yours truly, this “parcours” is psychologically less strenuous than getting from one salle of the Le Louvre to another.

From my apartment just outside of Paris, it’s only a 25-kilometre ride to Auvers, and much of it is attractive and uncongested. Along the way I have the option of taking a short detour, via Montligny, and climbing 150 metres to the centre of the Montmorency forest to meditate at a small pond, wondering how far within the woods are the badgers and wild boar, before descending on a dirt bike path to Taverny, only 5 kilometres from Auvers-sur-Oise.

However, for a first-time visit to art on “the edge” by the Oise, the cycling menu is more practical if you take your bike in the RER C line and get off at the station in Pontoise.

In Pontoise, ride or walk your bike up a steep hairpin climb towards the huge gothic cathedral Saint-Maclou (1145) and veer right and up until you reach a mini-chateau and garden.

From this “garden of the senses” you’ll look down upon the rooftops of Pontoise from one point of the stone-rimmed lookout and upon the Oise valley from the other side. Within the mercifully intimate museum (I call it the contra-Louvre) are works by Pissarro and other paysagistes who painted the region. It is open Wednesday to Sunday from 2pm to 6pm.

The quickest way to Departmental Road D4 is a jump straight off the cliff, but I highly recommend returning via the hairpin route and maybe stopping off at a boulangerie along the way.

In the 7 kilometres from Pontoise to Auvers-sur-Oise, you’ll be hard-pressed to find anything that is not beautiful. Careful not to take all this splendour for granted. To your right is the Oise itself and perched on the limestone cliff to your left are homes of the rich and unfamous. In between are typical stone-wall, tile-roof French rural homes. 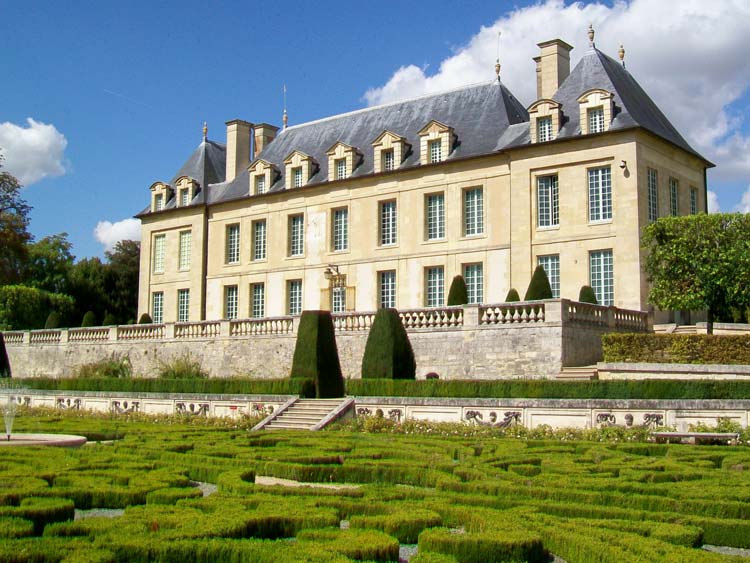 Chateau d'Auvers-sur-Oise has a multi-media show called Voyage au temps des impressionnistes. Photo thanks to the Auvers tourist board.

In the tourist office of Auvers, pick up a free map of the various museums and art walks. The town is not bashful about publicising its art history, but admirably without any tourist schlock (tat). If you phone them in advance of your trip on +33 (0)1 30 36 71 81, they’ll mail you the Plan Touristique. (There is also a PDF version here). Your map outlines the Chemin de peintres, with 29 tableaux of paintings by Pissarro, Van Gogh, Daubigny, Rousseau, Cézanne, Corot, and more and more Van Gogh, precisely set so you can compare the then and now.

Up the narrow country road above the eglise so famously painted by Van Gogh, you will see the great border, practically a neat line, between the exurb and rural France and then the open country. 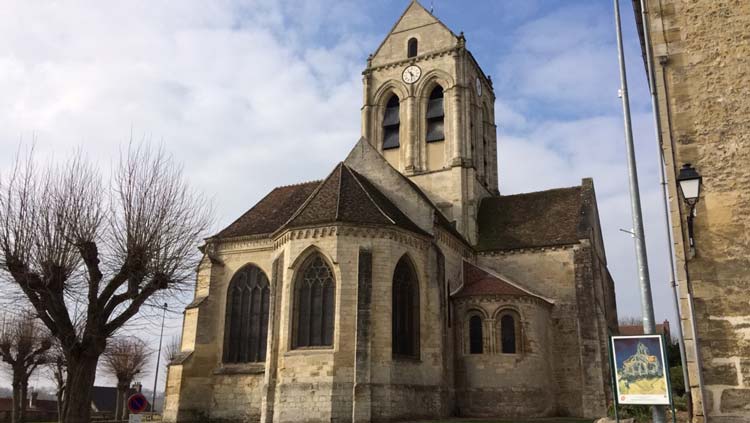 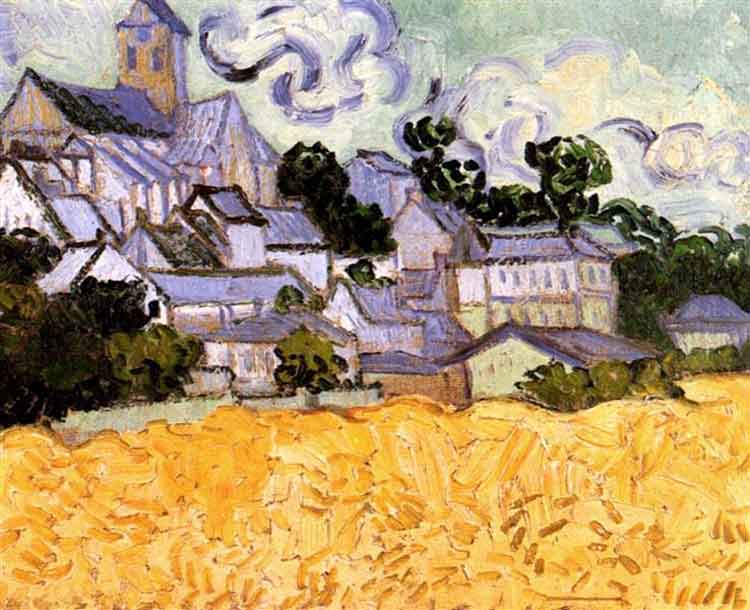 View of Auvers with church by Vincent Van Gogh, clearly showing the line between village and countryside.

You will also find Auberge Ravoux in Auvers where you can visit the attic room in which Van Gogh spent time towards the end of his life. The Auberge makes an interesting visit with the room kept as it was back in the 19th century. 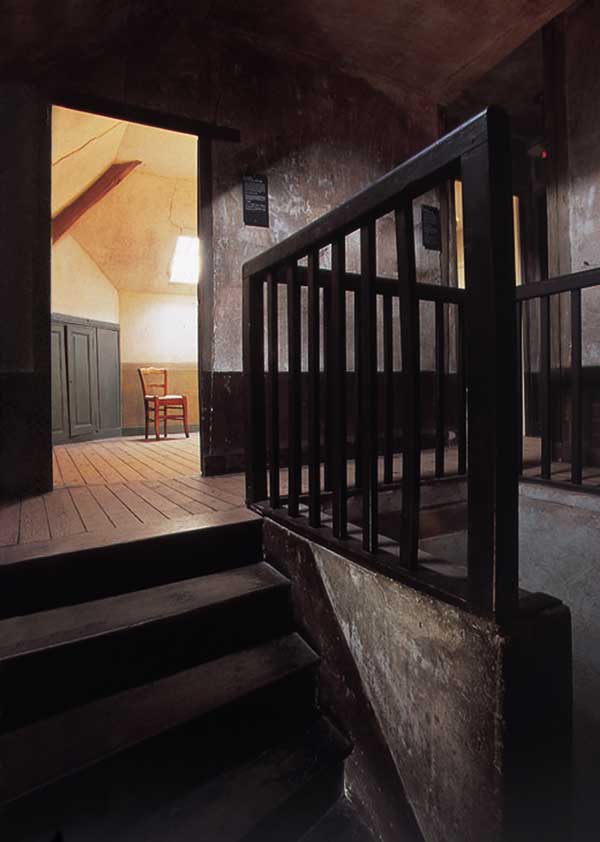 There is also a projection room showing films and interestingly there is also a restaurant serving authentic fare from the period of Van Gogh. 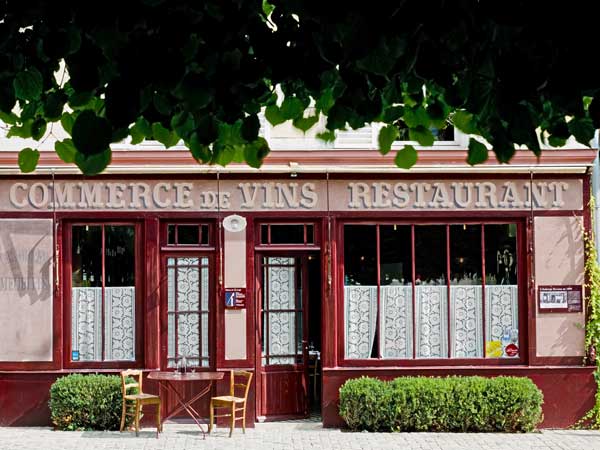 The modern day facade of the Auberge Ravoux, Auvers

It’s only a short stroll to visit the cemetery with the tombs of Vincent Van Gogh and his brother. From the cemetery you can cycle on paths through Van Gogh’s Le champ de blé aux corbeaux.

From Auvers-sur-Oise to Valmondois (6km) you’ll roll by traditional country residences with plush gardens and fruit orchards, including, to your left, a few habitations troglodytes built into the cliff. This is the road painted from every angle by Vlaminck. 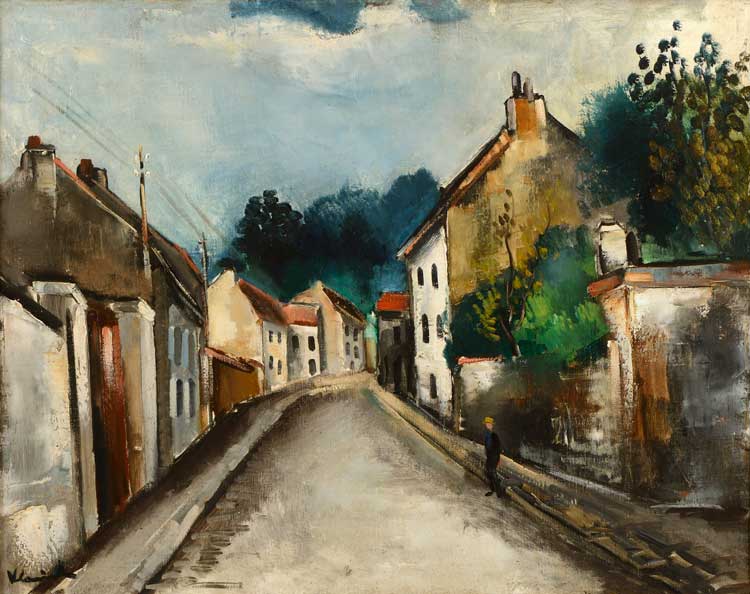 It looks pretty much the same today.

You get to Valmondois through a forest. In Valmondois there are several ways to pay tribute to Honoré Daumier (1808-1879), who is, perhaps, one of the cultural roots of the French satirical newspaper, Le Canard Enchainé. Daumier spent the final years of his life in this town, and his heritage is celebrated at the Villa Daumier, a symmetrical conclusion to the art journey started at the Musée Pissarro. Villa Daumier is only open Saturdays and Sundays between 3pm and 6pm, but if you miss it, you can pay tribute to the 1900 bust of Daumier on the main square of the beau village.

Once you partake of the three art towns and the beauty that seems to flow parallel to the river, Le Vexin awaits you. Crisscrossed by small and winding farm roads, this region is as earthy and rural as any of the deepest corners of France. Here, in sprawling, hilly farmland, beginning only 30 kilometres from Paris, you can prove that the open road is more liberating when it's travelled on human energy.

For cycling back to Pontoise you have a menu of beautiful farm roads through the Vexin. Or you may wish to use the Art-on-the-Edge circuit and Le Vexin as a stopover on the way to London (via Dieppe), or to the Deauville-Trouville beaches.

If you have promises to keep back in Paris, there are SNCF train stations in Pontoise, Auvers-sur-Oise and just outside of Valmondois for the return. You can book a train ticket here. 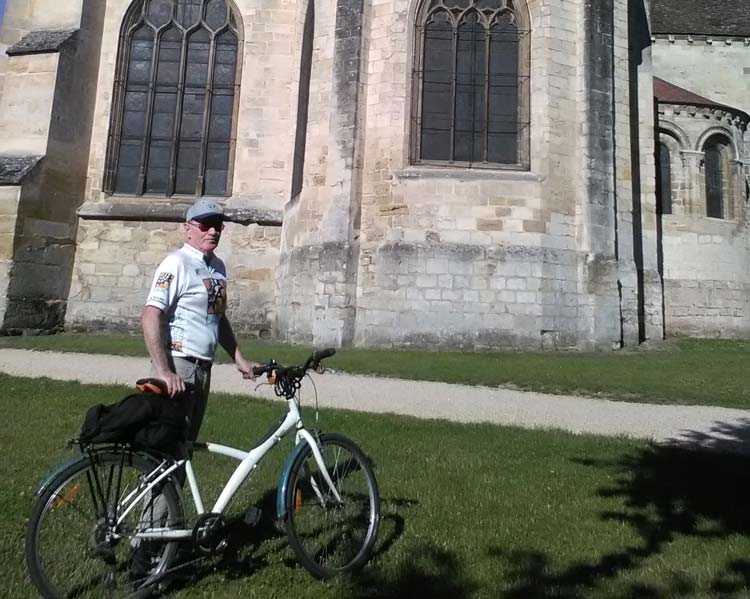 Mark Cramer has written books on cultural travel. His article "Can we go faster on a bicycle than in a car?" has been reprinted in various magazines. He lives in Paris and part-time in La Paz, Bolivia (he has written about cycling at 12,000 feet above sea level in a territory where you cannot find a flat road or a bike path). He's also done charity rides in France, does speaking engagements on cycling and quality of life, and is a member of the association MDB (Mieux se Déplacer à Bicyclette). He is also a member of the Los Angeles County Bicycle Coalition (he's wearing their T-shirt in the photo above outside the church in Auvers). He is an avid reader of and sometimes contributor to Freewheeling France. He can be reached at cramerjazz@gmail.com.