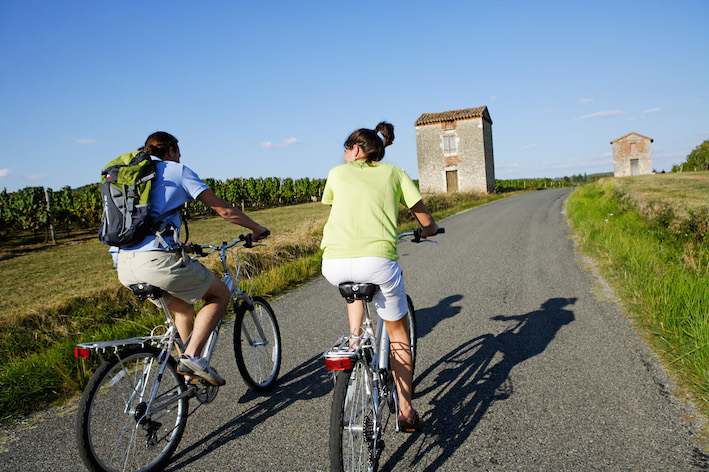 On the road in the Lot Valley. Photo: Lot Tourisme/P.Soisson

The Lot Valley bike route is back-water, pottering-style cycle touring country par excellence; it remains less well­-known than its more northerly neighbour the Dordogne Valley, but still has plenty of interest to offer the two­-wheeled visitor.

The countryside is pleasantly rich and lush, full of orchards and corn fields, and not too challenging for most levels of cycling; there is also little in the way of large-scale urban development. Arrive at the right time of year, as I did, and you'll find endless stacks of colourful corn cobs and plenty of fruit and nut growing, including sumptuous looking figs. The overall effect is like cycling though one limitless, beautifully tended, garden.

The most unusual feature of the area is the multitude of fortified bastide towns, found here partly because in medieval times it was the front line between English-held Aquitaine and Capetian France. Both sides built these strongholds, walled communities where the first brave residents willing to construct and defend these places were granted perks such as a building plot and growing land.

Some bastides have been preserved better than others and each has its own individual attractions, but common features are a lovely arcaded central place with geometrically laid out streets leading to town walls dotted with towers.

I headed up river from the confluence of the Lot and Garonne rivers at Aiguillon, a town perhaps more notable for its history (an influential duke and his friends lived the high life here) than what remains, although the château he built, now a college, is impressive. After using the unremarkable D271 to Clairac, a pretty village of half­timbered houses with its own abbey, the route joins a lovely tiny road by the river, and really takes on its own character. 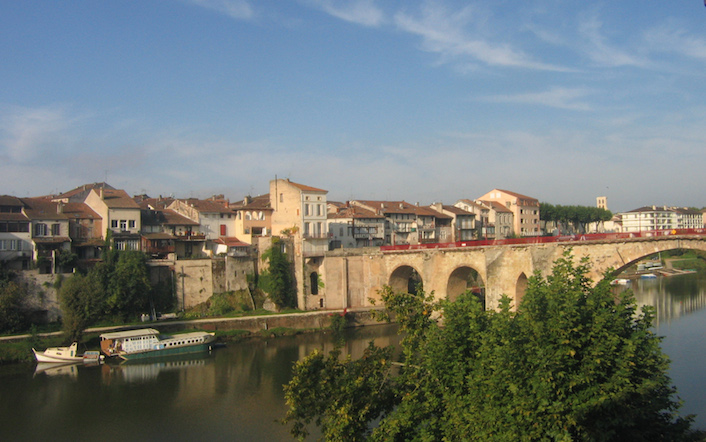 After idyllically quiet roads leading to pretty Castelmoron and Casseneuil you come to a real highlight of the route, the bastide town of Villeneuve­-sur­-Lot, with its wonderfully memorable fountained central square surrounded by substantial arcades, a large and impressive town gate and an elegant red brick church. If you are saddle sore this is a great place to take a break, with a good selection of shops, bars and markets and lovely riverside walks too.

Just two miles south of Villeneuve, the lovely hilltop village of Pujols is known to locals for its concentration of fine restaurants.

It's a short distance along a less exciting section of the route to the touristy but lovely hilltop village of Penne d'Agenais, with its ancient castle ruins from where you get an birdseye view of the 20th century neo­-Byzantine church backed by the River Lot and the landscapes beyond, making the steep climb up here more than worthwhile.

Though the towns immediately upstream of Penne d'Agenais are not high on the region’s list of tourist attractions (they hold the immediate area’s quota of industrial and out­of­town shopping development) each has its own attractions. In the case of Fumel a château whose former owner was slaughtered in his residence by the townsfolk; in Monsempron Libros’ case the lovely 12th century church of St­ Géraud.

This is where my short trip up the Lot ended, a mere 50 miles or so, but the official, signed route has now been extended upstream and sounds very inviting.

In the map below, I've included accommodation for the Lot Valley route itself, as well as the area heading down into the Midi-Pyrenees and up into the Aquitaine to cover Dordogne routes to the north, which are often married up with the Lot as part of longer itineraries.

From Cahors it is possible to continue following the river towards its source just east of Mende. The entire river will be eventually signposted as being part of the official bike route.

The route is mapped here in green. You can see how it links to the Canal de Garonne (purple) both direclty and via a link road (blue).

The Lot Valley bike route hugs the river for around 160km from Aiguillon to Cahors, via Villenueve, Fumel and Albas.

The Lot takes on the shape of a huge wild snake, curling north and south in huge bends housing some of the Lot's best known and prettiest villages including Puy­l'Évêque and Luzech. The current signed route ends at Cahors, where you can you can enjoy the splendours of its cathedral and a magical 14 Pont Valentré. 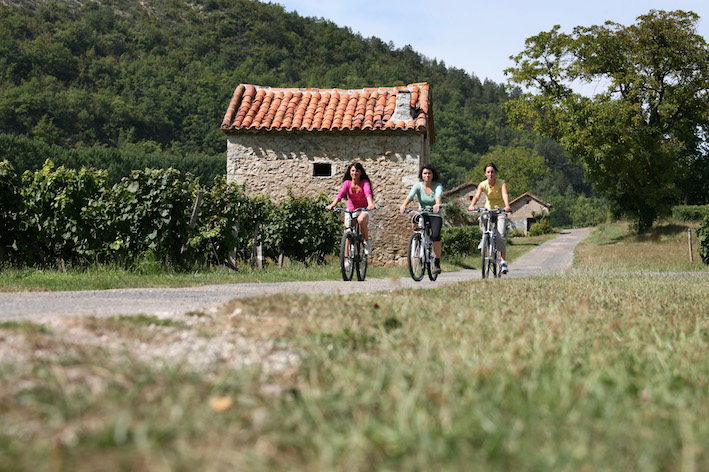 As Richard's 50-mile bimble above proves, you don't need to cycle the whole route to enjoy the Lot Valley at its best. The route links key towns and villages via a network of dedicated bike paths and towpaths and on-road routes, making it relatively easy to choose a section to match your ability or to fit in with your accommodation preferences. It's possible to ride sections of the route as day rides from a fixed base, or to make the route into a longer touring itinerary.

Side trips off the main bike route

If you are looking for a bit more of a physical challenge an impressively large signed network of minor road routes extends either side of the Lot Valley through more undulating terrain. You might want to consider a nothern loop from Villeneuve­sur­Lot to Monflanquin, one of the best preserved bastide towns in the whole area, with a fortified church and the lovely Place des Arcades.

A short distance to the north east of Fumel is Bonaguil, said to be the last medieval castle built in France and the last word in the military technology of the time, with its thirteen towers. It never saw any fighting however and these days draws tourists, not least because of the firework displays put on to dramatically light it up.

Bike hire and accommodation in the Lot Valley

Check our map above for bike-friendly places to stay, as well as bike rental options for the Lot Valley Veloroute. You can also use our bespoke bike hire service.

Self-guided rides in the Lot Valley

Many tour companies offer self-guided rides throughout the Lot Valley, often combined with itineraries that take in the southern reaches of the Dordogne. See our Organised tours section.

The Lot-et-Garonne and Lot tourism websites both have downloadable maps covering the Lot Valley Véloroute, as well as information on bike hire outlets and additional accommodation options.