Cycling in the Vosges on the Lorraine-Alsace border

Looking for an unspoilt, undiscovered corner of France to cycle? Look no further – local cyclist Ina Bosselaar shares her knowledge of cycling in the Vosges mountain range in north-eastern France.

The sun sets over the Vosges. Photo: Matthieu2007

The Vosges mountains staddle the regions of Lorraine and Alsace in north-eastern France, close to where France meets Luxembourg, Germany and Switzerland. It truly is worthy of its name, with the 'Massif des Vosges' measuring some 150km long and 60km wide. There are numerous opportunities for cycling trips and other outdoor activities in this lesser explored and under-rated corner of France.

The Vosges mountain range and its accompanyng national park shouldn't be confused with its namesake, which is one of four administrative departments of Lorraine, the others being Meurthe-et-Moselle, Meuse and the Moselle. Key towns and villages in Lorraine include Nancy, Metz, Epinal, Saint-Die-des-Vosges and Gerardmer, which can all make good bases or first ports of call for a cycling holiday in the region.

Alsace, meanwhile, has 2 departments: the Haut-Rhin and Bas-Rhin, with Strasbourg, Colmar, Mullhouse, Kaysersberg and Munster – all key bases and possible entry points.

The actual department of the Vosges covers an area of 5800km2, with some 50% of this area covered in forest. With just 65 inhabitants per square kilometre, there is plenty of space left for the rest of us to explore. The area can be divided into 3 different geographical areas with very varied landscapes:
The west: the plains of Neufchateau to Vittel
The heart: la Voge, a varied rolling landscape stretching from Vittel to Remiremont
The east: the mountains, the Massif des Vosges.

The High Vosges (Massif des Hautes Vosges) reaches peaks of up to 1400m. It's a sparsely populated area, with an abundance of natural beauty, and its peaceful and quiet roads make it an ideal region for active holidays in both winter and summer.

In the Massif des Vosges, you'll find soft round forms ('ballons') that characterise the landscape, with valleys, pine forests and lakes on gentle slopes of the Lorraine side, and steeper terrain on the Alsatian side, where you'll also find vineyards and traditional timber-framed buildings in villages and towns both large and small, including Riquewihr, Kaysersberg, Colmar, Eguisheim and Strasbourg. 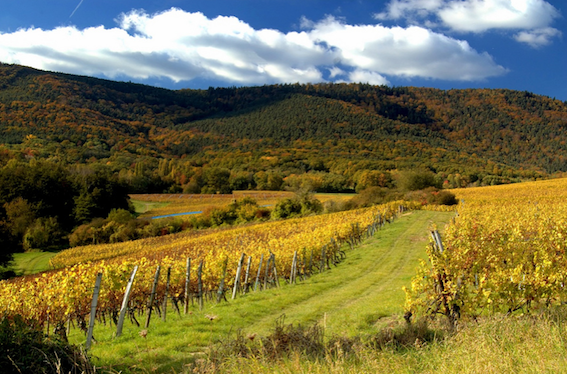 Valleys and vines in the Vosges. Photo: Helmut

When to cycle in the Vosges

The best time for a bicycle/mountain bike holiday is from late April to mid-October. On the highest cols, temperatures in spring and autumn are a lot lower than in the valleys. There may also be more wind on top of the ridge and in early spring (April) above 1000m there is regularly snow to be found. Take sufficient layers of clothing.

The Vosges has a mountain climate year-round, with the winters cold and regular snow falling and alternating with dry, cold periods. In summer, it's sunny, with high temperatures interspersed with the occasional thunderstorm in the evening.

The relief, forests, water, fresh air and the wind all combine to make the High Vosges a big multi-activity area where both young and old can find countless opportunities for relaxation and adventure. In summer, it's hiking, cycling, mountain biking, and water sports; in winter, it's skiing, cross-country skiing and snowshoeing.

Cycling in the Vosges

There is plenty to keep both road cyclists and mountain bikers happy in the High Vosges. Well-known cols include the Col du Bonhomme, Col de la Schlucht and Grand Ballon, but good routes in this part of France are really only limited by the energy in your legs, with climbs geenrally between 5-10% gradient (but, of course, there is usually a pretty descent on the other side). The highest peaks are the Grand Ballon (1424m) and the Hohneck (1362m).

On the western side (the 'low' Vosges), there are a number of dedicated bike paths or 'voies vertes', which are relatively flat for riders wanting to take things a bit easier.

In the north, among others, you'll find the Col du Donon, Champ de Feu and the most southern point is the recommended Ballon d'Alsace, where the Franche-Comté, Alsace and Lorraine regions all meet. 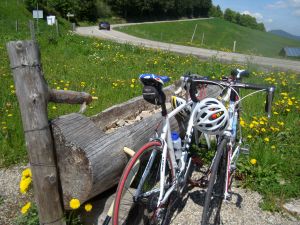 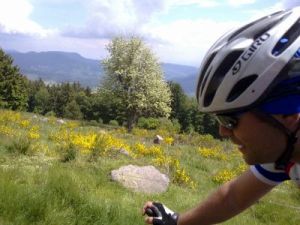 There are routes for cyclists of all types and abilities in the Vosges. Photos: Ina Bosselaar

A challenging day ride for experiened cyclists is the Tour de Munster, a nice tour 120km in length and with 2000m of climbing. It features challenging ascents and beautiful downhills from Munster and Turckheim, to the Col du Calvaire, Col du Wettstein, the descent of Col du Bonhomme, and on to Plainfaing via the Valtin, climbing the Col de la Schlucht and descending back in to Munster.

A lesser known highlight is the Route des Crêtes (the 'crest road'), a beautiful route over the highest ridges, North-South, on the border with Alsace. It provides lovely views over the Rhine valley up to the Black Forest and the Alps. The whole landscape can be seen along this route: the ballons (rounded hills), the mountain peaks, the various lakes such as Lac Blanc, Lac des Truites, Lac de Longemer and the chaumes, the mountain pastures. In winter, the Route des Cretes is largely closed and accessible only to hikers, cross-country skiers and skiers.

Mountain biking in the Vosges

The Vosges have already earned their mountain bike (VTT) stripes, with Julian Absalon, France's double Olympic gold medal-winning cross country mountain biker coming from the Vosges, where he did most of his early riding.

For mountain bikers, there are challenging routes through the wood, along mountain slopes and rivers – all offering a window on some of France's best nature spots. They are often on stoney, wooded paths on broad forest trails or narrow single tracks.

There are routes for more experienced die-hard riders, as well as for recreational mountain bikers, with beautiful routes following the winter ski slopes graded blue (easy), red (hard) and black (technically difficult). In addition, there are mountain bike trails near the ski resorts for both free-style mountain biking and for down-hill biking.

For a beautiful but challenging mountain bike route, try the route No. 9 (black) near Xonrupt-Longemer, which takes in Col de Surceneux, the Straiture defile, Rocher the Boslimpre, the Petite Vallée de la Meurthe, Ban-sur-Meurthe, Serichamp, le Valtin and leads you back to Xonrupt-Longemer. It's a ride of some 35km with alternating climbs, descents, scenic views, and very steep single tracks.

About the author
Cyclist Ina Bosselaar lives in Lorraine, just a few kilometres from Alsace via Col du Bonhomme.

Zoom into our map below, which highlights bike-friendly accommodation across Lorraine and Alsace, or drop Ina a line (details above).

Bike hire in the Vosges

See our Lorraine and Alsace bike hire pages for links to bike hire outlets across the region.

Getting to the Vosges

The mountains are around 100km from both Nancy and Strasbourg, 45km from Epinal and Colmar, while Basel if 100km away. The Vosges are easily accessible by car, train (TGV), with airport links also from Strasbourg and Basel.

Tourist information for the Vosges