It's one of France's great cycling cities – Grégory Delattre, who runs the excellent I Bike Strasbourg website, has kindly written us this overview of cycling in his hometown. 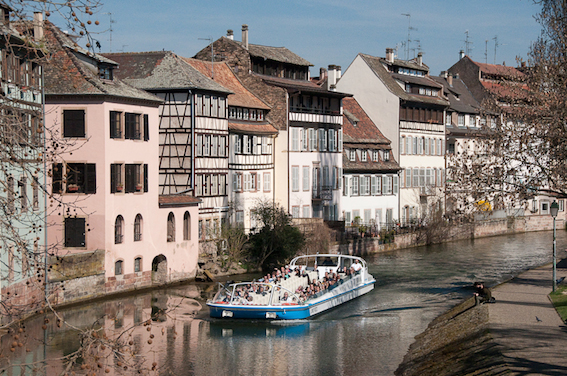 In Strasbourg, traditional architecture, captured here by Greg at I Bike Strasbourg, sits side-by-side with ... 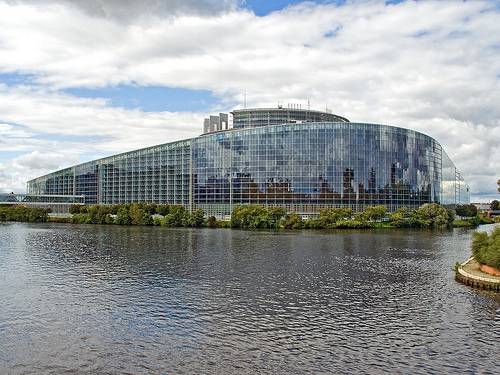 Strasbourg is located in Alsace in the north-east of France, 500km east of Paris, and closer to the German border than to the French capital. The city itself has 264,000 inhabitants, with the outlining area and its 28 satellite cities home to a total of around 476,000. Its history is both complex and fascinating, balancing between France and Germany.

Surrounded by the River Ill, the city centre is an urban ensemble characteristic of central Europe, offering a fascinating blend of French and German influences and reflecting the political and religious changes that have taken place in the city since mediaeval times. It was named a UNESCO World Heritage Site in 1988.

Neustadt ('new town' in German) was a vast new extension adjoining the northern part of the old city. It was designed around public spaces and monumental buildings and was planned by the Germans since 1871 when Strasbourg became capital of the Reichsland of Alsace-Lorraine. Neustadt marked a turning point in the long urban history of Strasbourg.

Strasbourg is the seat of the European Parliament and of several other European administrations, including the Council of Europe and the  European Court of Human Rights. The parlement building was completed in 1998 and its 750 seats are used by parliamentarians for the monthly sessions of the Parliament of the European Union.

From the begining of the 21th century, Strasbourg and the city of Kehl, its German neighbour just 3km away, joined forces to build the Deux Rives project, a binational city that spans each side of the border. Deux Rives is the largest urban project undertaken in Strasbourg since the construction of the Neustadt between 1871 and 1918. The main link will be assured by a new tram line which will cross the Rhine River border on a new bridge that will also be accessible only for the new tramway line, cyclists and pedestrians. 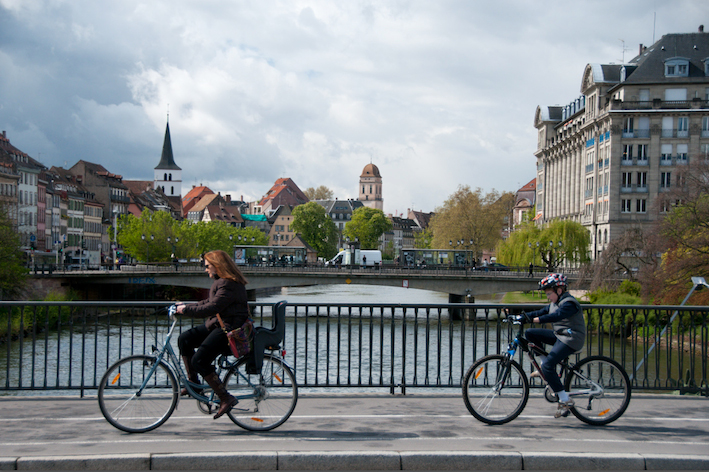 Every day life in Strasbourg. Photo: I Bike Strasbourg

Strasbourg started to plan bicycle infrastructure in 1978 and today 8% of people in the Strasbourg area cycle (this rises to 14% in the city centre). There are more than 580km of cycle tracks, with the Alsatian capital claiming the honour of being the city in France where bicycles as a means of daily of transport are used the most.

The third part of the city's cycling plan, adopted in 2011, sets out to double the modal share of cycling in the city to 16% by 2025. A number of actions have been scheduled to meet this target, including the creation of Vélostras, a cycle express-route network based on the Danish and Dutch cycle superhighway systems as described in this Guardian article.

A large part of the old city centre is a car-free zone, which means you can cycle or walk without any danger during your sightseeing. Every great touristic attraction (Petite France, European Parliament, German quarter, parks, etc) can be reached by the bicycle network. You can rent a bike at Vélhop, Strasbourg's bike sharing system, from €5 per day. Vélhop is both handy and affordable; the bikes are of excellent quality, lockable and regularly serviced.

The forts trail is a Franco-German cycle route combining heritage and nature at the gates of Strasbourg. Over 85km without any difficulty on both sides of the Rhine river, cyclists can sample delights ranging from hillside to countryside, and the Rhineland forest to woodlands, while at the same time discovering the 19 fortifications making up the Strasbourg's famous 'ring of forts'.

Strasbourg is also crossed by the 570km EuroVélo 5, the London to Brindisi (Italy) route that comes into France at Calais and continues on to Lille before jutting out into Belgium and down to Luxembourg before coming back into France to take in parts of Lorraine and Alsace. The French leg of Eurovélo 15, the Rhine River Route between Rotterdam and Andermatt in Switzerland also passes through Strasbourg. 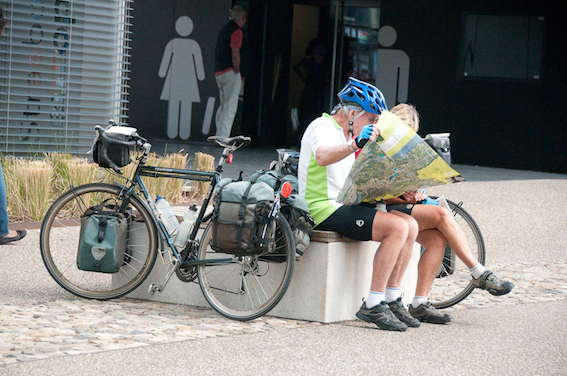 Cycle tourists take a break and look ahead to their next destination. Photo: I Bike Strasbourg

From the Strasbourg city limits, you can discover the whole of Alsace thanks to l’Alsace à vélo, which brings together more than 2000km of cycle routes for all parts of the region and makes Alsace on of the best places in France to discover by bike. Beginners and experienced cyclists, couples or families can discover the Rhine valley, the vineyards and the Vosges mountains on roads marked and protected along canals, old railways or on the old Roman road. You can travel with your bike free of charge in all the regional trains (except several rush hour trains on the Strasbourg/Basel line).

After several days of wandering Alsace, you can cross the Rhine river and continue your travels through Germany or Switzerland – by bike of course…

Grégory knows more about cycling in Strasbourg than just about anyone. He's a a bike project manager for the city of Strasbourg, and runs I Bike Strasbourg (in French) in his spare time. He also enjoys travelling Europe to discover bicycle culture in different places like Copenhagen, Berlin, Ghent, Vienna, Paris or Toulouse. Next up: Amsterdam.

For bike-friendly accommodation options throughout Alsace, including Strasbourg, browse our Where to stay section.

Tour companies (and cyclists) are fast waking up to how fabulous Alsace is as a cycling holiday destination. Keep an eye on our Organised Tours section for self-guided holiday options across the region. Most organised tours in Alsace will take in Strasbourg.

More information on cycling in Strasbourg

You can find lots out lots more about cycling in Strasbourg on Greg's website, www.ibikestrasbourg.com (in French) or at the Maison des cyclistes, Vélo'Hus, near the city centre at 12 rue des Bouchers (email via cadr67@fubicy.org).