Max Wooldridge has this guide to cycling in Alsace and bike routes for cycling the Alsace Wine Route, plus accommodation and bike hire information. 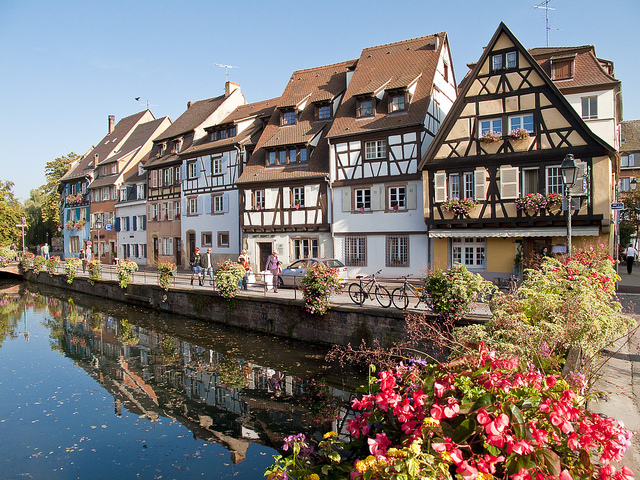 Alsace was part of the Holy Roman Empire, and later, was fought over between France and Germany several times. Now, as a border region, Alsace happily borrows from its peaceful neighbours Germany and Switzerland.

Tucked into north­-east corner of France, near the border with Germany, Alsace has its own charming and unique Franco­-German character.

Today, Alsace largely makes its money from tourism and wine, and a thriving automobile industry, thanks to the large Peugeot factory in Mulhouse. Not that you’ll see many cars on the roads. Stay off the main routes and some days it may feel like you have the region to yourself on largely traffic­-free country roads.

Cyclists, of course, need pedal power, and that requires something to keep their engine going cycling between all the towns and vineyards. In Alsace, cyclists can gorge on local hearty cuisine in full knowledge they could burn off the calories on their bikes. So, dive into local specialities of Choucroute (saurkraut), smoked Morteau sausage and Kugelhopf, a delicious cake made with raisins and almonds flavoured with schnapps or brandy.

Try to pronounce the German­-sounding, deliciously dry and aromatic local wines ­ such as Riesling, Kaefferkopf and Gewürztraminer ­ after a few glasses and you'll not only entertain yourself, but everyone else around you, especially any locals. There are also first­-class sparkling wines like Crèmant d'Alsace.

Alsace can feel a little disorientating at first. Locals speak French but with an unusual accent (a large proportion of the locals speak a dialect of Upper German). But there's also the beautiful French villages bearing German that may confuse you ­ especially after several hours in the saddle. But there’s nothing ambiguous about cycling in Alsace – it’s truly fabulous riding terrain.

Where to cycle in Alsace

Alsace majors in wine, cycling and beautifully­ preserved villages. You can combine all of these on the highly recommended Alsace Wine Route (below, or click here for PDF), which stretches for 120km along the eastern foothills of the Vosges mountains (see here for our article dedicated to the Vosges). Start at Marlenheim, west of Strasbourg, and head southward to Thann, some 30km south­-west of Colmar. 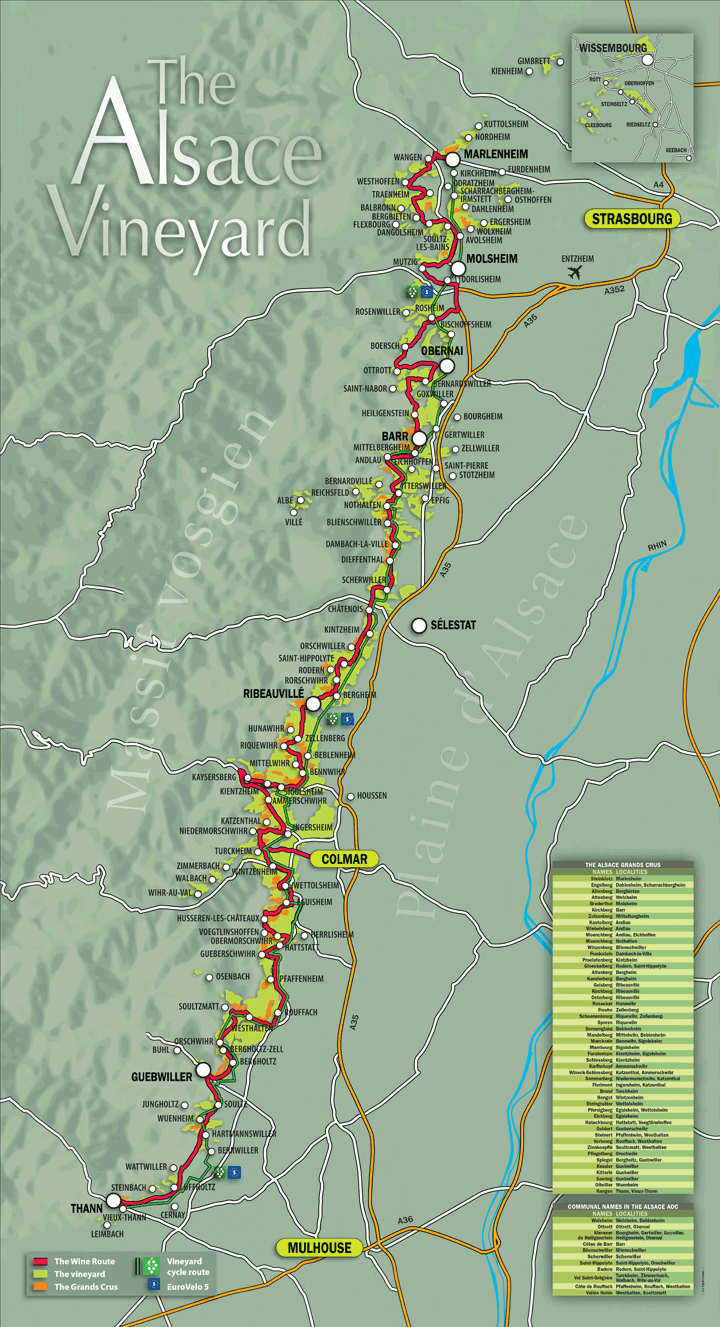 Make sure your route takes in towns like Eguisheim, where half­timbered houses overflow with flowers and wrought­ iron signs and lovely cobbled streets. Likewise, the village of Riquewihr, which is surrounded by vineyards right up to its 16th­ century ramparts. Its medieval houses have geranium­-clad balconies and the towns boasts, a 13th­ century gate tower, the Dolder.

Turckheim is also a must-stop. With wonderful narrow streets rambling through colourful timber­-framed houses with window boxes in full bloom. The imposing 12th century Château du Haut­ Koenigsbourg, near Turckheim, lords it over a vineyard­-lined valley, with great views across to the Black Forest in Germany. Historically, the castle watched over key trade routes and Maginot Line fortifications.

Likewise, be sure to stop off in medieval Bergheim, with its superb 14th­ century gate and basilica and brilliantly preserved ramparts. Also Rouffach, a charming medieval jumble of cobbled streets dotted with churches.

A great ride is across the German border to Breisach­am­ Rhein, site of one of Germany’s finest gothic cathedrals. You can hug the banks of the River Rhine before crossing back into France and along the Roman wine road back to Ammerschwihr. From here, head south on traffic­-free country lanes surrounded by vine­-draped hillsides and wooded valleys. The EuroVelo 15 Rhine River Route also passes through Alsace.

When to cycle in Alsace

Spring and autumn months are usually the best times to cycle in Alsace. As ever in France, the peak holiday season of July and August means accommodation can be fully booked, so plan well ahed if you want to cycle in these months. Later in the year may be a little on the chilly side, but it more than compensates with beautiful autumnal colours.

Medieval Ammerschwihr is a good place to base yourself. There is a climb out of the village into the vineyards, where riders are rewarded with superb views of the surrounding Alsace Plain and the Black Forest mountains on the horizon.

Bike­-friendly hotels include the traditional Aux Armes de France, in the centre of the village of Ammerschwihr. There’s also the Hotel Kapuzinergarten across the river (and the German border) in Breisach ­am­ Rhein, run by a cycle-­friendly owner Engelbert Hau. You can’t miss him ­ he has the best beard in the whole of the Alsace region. His ‘Kloster', or convent rooms, are furnished with original wooden pieces from the nearby former Kapuziner convent.

For more ideas, click on the map above or search for Alsace in out Where to stay section.

While still not as popular on organised tour itineraries as the Loire or Burgundy, Alsace is slowly building a strong reputation as a more off-the-beaten-track cycling destination for people looking for self-guided rides with tour company support. See s selection of self-guided rides in the region.

Cycling books and maps for Alsace

More information on cycling in Alsace

Max Wooldridge is a UK­based freelance writer who specialises in travel, sport and music. A keen cyclist, he divides his time between London and Norfolk.