Cycling holidays in the Gers, Midi-Pyrenees

The Gers is an often overlooked department of the Midi-Pyrénées area of Occitanie – local cyclist Ray Parker has sent this overview of cycling in Gers in the hope that more people will explore his corner of France. 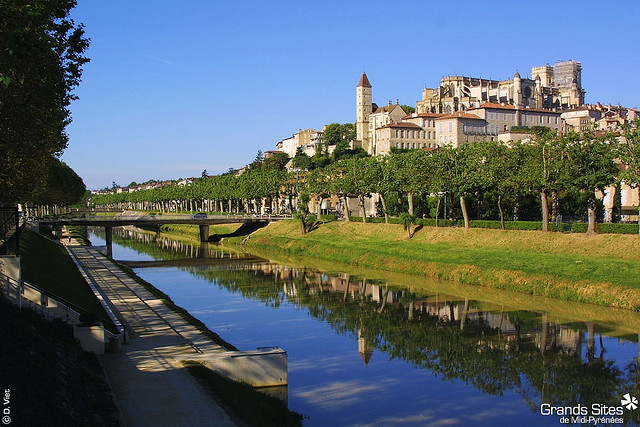 Auch, the capital of the Gers, with the river Gers running through it. Photo: Compte officiel du Comité Régional du Tourisme

Largely ignored or unknown by many, the Gers and its hilltop bastide villages remains both unspoilt and uncommercialised.

It is in many ways one large, unpolluted rural community with little in the way of industry, apart from the distillation of Armagnac brandy and wine-making cooperatives.

The locals here remain in touch with the land, its rolling hills, sunflower fields and vines; it is truly picturesque.

Auch, the capital city of the Gers does not feel like the capital of anywhere. It’s very relaxed and a most delightful place where you can indulge the French way of life, wander the streets and boulevards, stop for a coffee, or take lunch in the square.

The Gers is rich in both culture and history. D’Artagnan, who led Louis XIV’s Musketeers of the Guard (and the inspiration Alexandre Dumas when he wrote The Three Musketeers) originates from Lupiac, a village in the Gers where medieval enactments take place at various times throughout the year (see the tourist board website here). The museum in the town is worth a visit too. Henry IV features a lot here; he was particularly popular in this region and his influence can be found among buildings, statues and road names. 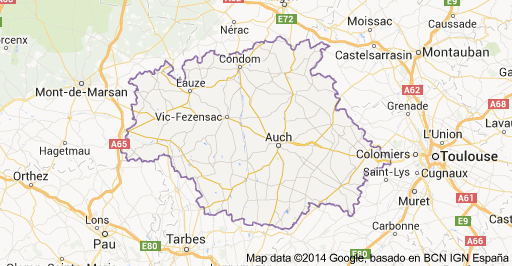 Map by Google (click to open in a new screen).

Gers is a department in the old Midi-Pyrénées area of the Occitanie region of France. It is bordered by the Hautes-Pyrénées, Haute-Garonne, Tarn-et-Garonne, Lot-et-Garonne, Landes, and Pyrénées-Atlantiques. It is one of the least densely populated areas of Europe, and as a result retains much of its original rural character.

While the department has a habit of feeling remarkably remote, it's proximity to Toulouse means it's also close to one of France's major hubs and easy to access from major airports and railway stations. It also provides a great link to the forests of the Landes and to the Atlantic coast.

When to cycle in the Gers

You can ride at almost anytime of the year in the Gers, which will soothe your soul with its quiet lanes and peaceful routes. But, of course, the weather is much kinder from about May onwards. Indeed, May and June and into early July are ideal times for cycling, when the weather is great, and the sun lacking the bite of high summer. Things start to cool off again in September and October, again lovely months for cycling.

As in other regions, August is a busy month when the French are on holidays and the roads tend to be at their busiest. However, with a little planning, it’s still possible to seek out the back roads that are still remarkably quiet for cycling.

Where to cycle in the Gers

Almost any road in the Gers is perfect for cycling, and there are routes to suit all abilities, and many of the official routes are signposted. The Gers tourism website (in French) has an interactive map with some 16 road and mountain bike routes. More details (and better mapping) are provided at this sister site. Three mountain bike routes (including GPS downloads) are available here. See also the Fédération Française de Cycloutourisme (FFCT) website (in French).

IGN also has a Gers cycling map available, which contains a guide written by Bèatrice Barriere, who is very active in cycle tourism in the Gers via the FFCT.

Mountain biking in the Gers

For mountain bikers, the cycle club Le Guidon Simorrain has been awarded Base de VTT status, making it the only FFCT-certified mountain bike base in the Gers. At the time of writing (March 2014), the club was working on maps of the area that will be available for mountain bikers to collect at the departure point in Simorre. There are eight permanently marked circuits that people can follow and ride anytime. See the website for the Base VTT des Tuileries at Simorre for more information. The circuits will also be available for downloaded for GPS. For information in English on VTT in this area, contact Eliane and Mark at La Haille Gîtes (see accommodation section below) as they are active in the local club.

Every January and February sees the 'Challenge de la Lomagne'. This is a competition consisting of four races, with one race qualifying for entry into the Championship of the Midi-Pyrénées. But it is not only a race – a randonnée that's open to everyone runs alongside, and Nicolas Portal, sporting director for Team Sky, is always present and riding. So, if you think you can beat Nicolas Portal on a mountain bike, here's where to do it.

Other maps and general information

Other good maps and guides are available locally from tourist offices in most towns. IGN and Michelin regional and town maps can also be found in most local newsagents (or ‘tabacs’ in French), but aim to buy ‘carte topographic’ and/or the Carte de Randonnee, which provide much more detail and are best suited to devising smaller backroad routes.

There are few, if any, general tourist guidebooks dedicated to the Gers, though you will find guides to individual attractions, events and museums at local town halls (Hotels de Ville) or tourist offices.

Regardless, if you are keen on beautiful vistas, quiet roads and leisurely journeys by cycle, choose the Gers for your next adventure. It will delight and surprise you at every turn.

Ray Parker lives in the Gers with his wife, Denise. They enjoy nothing better than sharing their corner of France with others.

Accommodation for cycling in the Gers

Organised cycling holidays in the Gers

Gers doesn’t feature as regularly on cycle tour itineraries as many other areas of France, which is either a shame in that fewer people get to enjoy it, or a good thing in that much of it remains to be discovered. However we do list a few self-guided rides through the Gers in the Midi-Pyrenees section of our Organised Tours.

Bike hire in the Midi-Pyrenees

See our Midi-Pyrenees bike hire section for bike rental shops; see also our bike delivery services page for companies that will bring a bike to the door of your accommodation.