The Ille-et-Rance Canal at Hédé, where there is a flight of 11 locks. Cycleable towpaths run both sides of the canal. Credit

Cycling in Brittany is a breeze thanks to the region's network of voies vertes, says G.H. Randall, author of the best-selling guide, Brittany's Greenways.

In the first half of the 20th century, Brittany’s transport needs were served by a network of railways, largely narrow or metre gauge, and a system of waterways. All were major engineering achievements in their time but destined to fall into disuse in the face of competition from the improving road system. Overlooked and neglected for decades, these ready-made but outmoded arterial routes have recently been revived as green ways, a major leisure resource, free from motorised traffic.

Railway track-beds have been cleared and resurfaced, canal towpaths have been renovated and safety improved at road crossing points. Additional facilities geared to the needs of cyclists and walkers are dotted along the way. A number of former stations are converted to tourist offices, others to gîtes d'étape (hostels) or museums. The work of improvement is on-going as there are hundreds of kilometres of these routes to be brought back into use. Often passing through deep countryside, these green ways ('voies vertes' in French) are an ideal way to discover Brittany and some of its treasures that are hidden from road-bound tourists.

The concept of green ways (sometimes greenways) is international, rooted in the 'green' movement and the 'sustainable development' buzz of the last few decades. The European Greenways Association sets the criteria; accessible to everyone (including mobility impaired people), even surface, satisfactory width, only very gentle gradients, no motorised traffic. This makes very pleasant cycling for anyone who is new to cycling, or anyone who indulges perhaps only when on a cycling holiday. The green ways are a fast and stress-free way of accessing nearly all parts of Brittany, or travelling through to the rest of France. Take them slowly, enjoy the view and use them as a jumping off point for further exploration.

Cycling in Brittany made easy 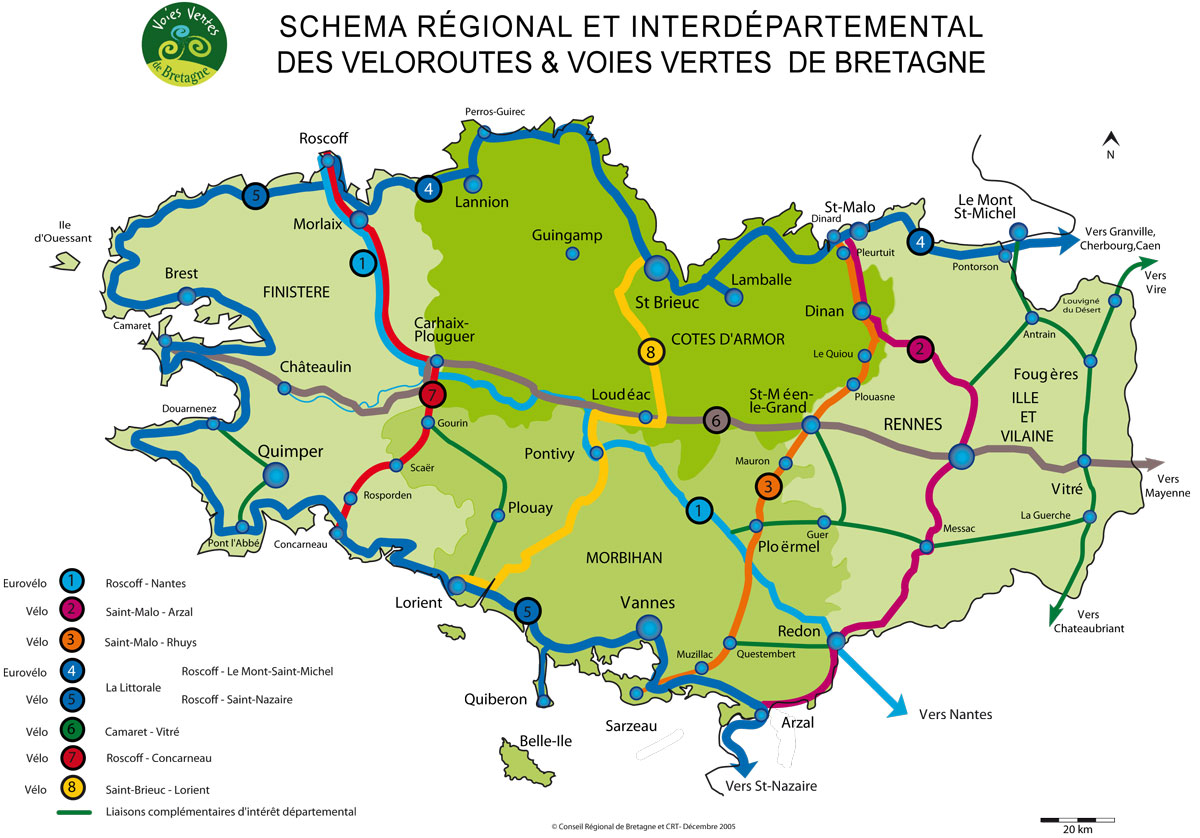 There are now six major green way cycle routes in Brittany that interlink to form a network:

The two 'missing Vs' above, the V4 and the V5, are not technically green way routes.

The V4 is the coastal route from the Normandy border near Mont St-Michel to Roscoff, and the V5 takes it on from Roscoff, around the western peninsulas and along the south coast to the Brittany border in the south-east. The V4 is now complete, having received a major boost from the inauguration of the Tour de Manche in June 2013. The V4 is now covered by a new Red Dog Books guide, ' V4 - a Brittany Cycle Route'.

The V5 from Roscoff now reaches Goulven on the north Finistère coast and some further additions mean that the Finistère part of the V5 is now more than half done. Little of these two routes, known as La Littorale, is or will be on actual green ways – a bit of up and down can be expected, and signing, where it exists, can be well-intentioned but vague or confusing. It's essential to have a map as back-up.

Here is an interactive map. 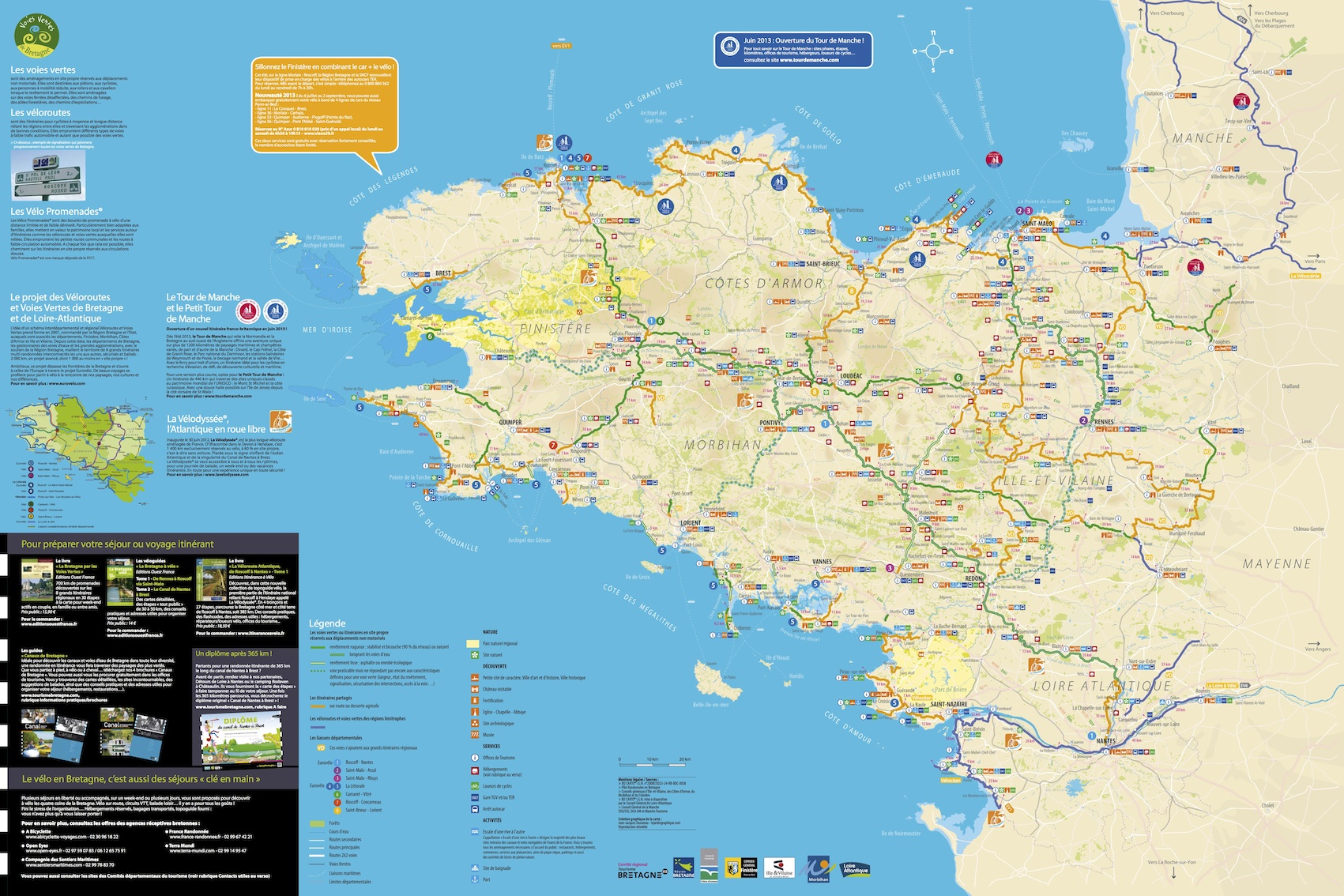 The six main green way routes make a sort of double H-shape across central Brittany, with the V2 branching off to Rennes in the east and the V8 cutting through the middle from north to south. But don't be misled by their names. The V2 and V3 actually start from Dinard, on the opposite side of the river Rance from St-Malo; the V3 has a mid-section of about 39km on roads; the V7 is mostly a road route from Roscoff to Morlaix from where the green way reaches Rosporden followed by a signed route, partly off road, that stops at the borders of the commune of Concarneau.

The V1 Roscoff to Nantes duplicates the V7 from Roscoff to Carhaix and then follows the Nantes-Brest Canal to near Nort-sur-Erdre, completing its journey to Nantes by a mixed route which is signed by virtue of the Velodyssey Atlantic coast route from Ilfracombe to Hendaye which shadows the V1 from Roscoff.

The V8 can now be called a viable route but only the central part of about 65km is green way. The V8 actually starts from Yffiniac to the east of St-Brieuc following minor roads and farm tracks for some 45km to the barrage at Bosméléac. From here a new green way along the Rigole d'Hilvern  has been completed as far as Hémonstoir near the Morbihan border, but the V8 leaves the Rigole at St-Caradec to follow the V6 westwards to Mûr de Bretagne. From here the Nantes-Brest Canal takes over as the V8 route to Pontivy. Pontivy to Hennebont along the Blavet towpath is practicable but not yet upgraded to green way.

Other shorter stretches of green way have been developed in various parts of Brittany and a list of these can be found in Brittany's Green Ways (UK, US, Fr). 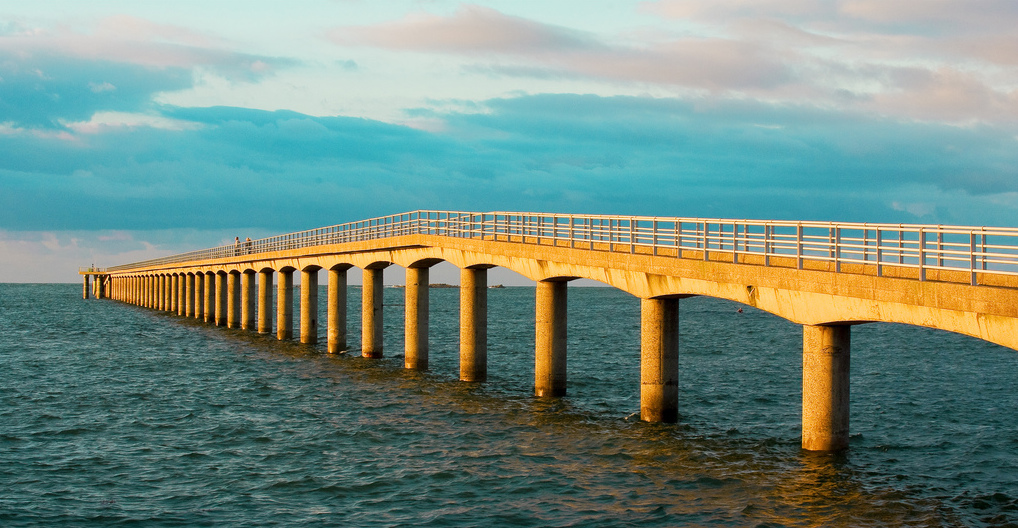 The sun goes down off the coast at Roscoff. Photo: Protonéo

Brittany at its best

The best parts of Brittany's current green way system for scenery are at opposite ends of the network: the V7 between Morlaix and Carhaix and the V3 between Malestroit and Questembert.

On the Morlaix-Carhaix stretch, the V7 passes over the Monts d'Arrée, the highest range of Hills in Brittany (up to 387 metres) with outcrops of granite, craggy slate peaks and deep natural woodland in the valleys - the green way alternating between cutting and embankment as it climbs to its highest point at the Gare de Kermeur. There are numerous mountain-biking circuits linked to the green way and these are worth exploring just for the scenery alone.

The V3 south from Malestroit climbs over the Landes de Lanvaux, the main high ground of Morbihan. It is deep, rolling countryside rising to open heath-land, very beautiful, and the green way surface here is tarmac, which is a joy to ride on compared to the compacted sandy gravel of most of the rest of the network. The whole of the V3 south of Mauron has a tarmac surface and numbered cycle rides (not VTT/MTB) are signed, taking in many of the places of interest in the surrounding country. Just south of Mauron the V3 is only a short distance from the Forest of Brocéliande, steeped in Arthurian legend, with the Valley of No Return, the Golden Tree, Merlin's Tomb and the House of Viviane - a worthwhile diversion through Néant-sur-Yvel, and perhaps taking in the picturesque Château de Trécesson.

However, the Rigole d'Hilvern  (V8) is worth doing for its own sake: Quiet, wooded countryside with some interesting diversions for anyone not in a hurry.

Of the five departments of modern Brittany, it is Ille-et-Vilaine that seems to be doing most in the way of developing other long distance cycle routes by minor roads, while Côtes d'Armor and Morbihan have a more coherent system of circuits for tourists, mostly based on the green ways. Finistère has made progress with components of the coastal route (La Littorale) and a couple of additions to the western end of the V6.

Green ways are a great idea and a lot of work has been done to bring the idea into reality, but there remains a lot still to do and the situation on the ground is constantly evolving.

G.H. Randall is the author of Brittany's Green Ways: A Guide to Re-Used Railway Tracks and Canal Towpaths (UK, US, Fr).

Brittany is one of France's most accessible regions, thanks to its ferry ports and train network. Brittany Ferries in particular operates an extensive timetable of services year-round from several ports. DFDS Seaways, MyFerryLink, P&O Ferries and Condor Ferries all also run services to Brittany and other northern French ports that provide good access routes. Celticlink Ferries and Irish Ferries both run services from Ireland to the north of France. For information on trains, including the Eurotunnel and Eurostar services to northern France, see our getting to France by train page.

Accommodation for cyclists in Brittany

There's an accommodation option for every taste and budget in Brittany. Click on the icons in our map for links to the bike-friendly accommodation in our database, or search 'Brittany' in our Where to stay section for a range of links to hotels, gîtes, gîtes d’étapes, B&Bs and self-catered accommodation. See also our other advice on finding accommodation in France.

Renting a bike in Brittany

For links to local rental outlets, see our bike hire in Brittany listings. If you can recommend one not on the list, please drop us a line. The V7 passes over the Monts d'Arrée, the highest range of hills in Brittany. Photo: Erick Martineau

There are many companies offering organised rides in Brittany that usually inlcude pre-arranged accommodation, maps and on-ground support and advice. They are usually self-guided, giving you a mix of independence and local knowledge and support. You can search our organised tours section here.

Books and maps for cycling in Brittany

There are also two north-south routes from St Brieuc. Text and route notes are in German but the maps and map legends are in English and can be easily followed. French publisher Rando Editions has a guidebook, Le tour de la Bretagne à vélo, in French.

See also our guide to cycling the Nantes-Brest Canal, as well as our history of the canal. There are also guides to Brittany, St-Malo, Rennes and the Bay of Mont St-Michel.