Cycling Around Toulouse in the Midi-Pyrénées

Richard Peace, author of Cycling Southern France, takes to the roads around Toulouse, Albi, Castres and the Garonne in the Midi-Pyrénées. 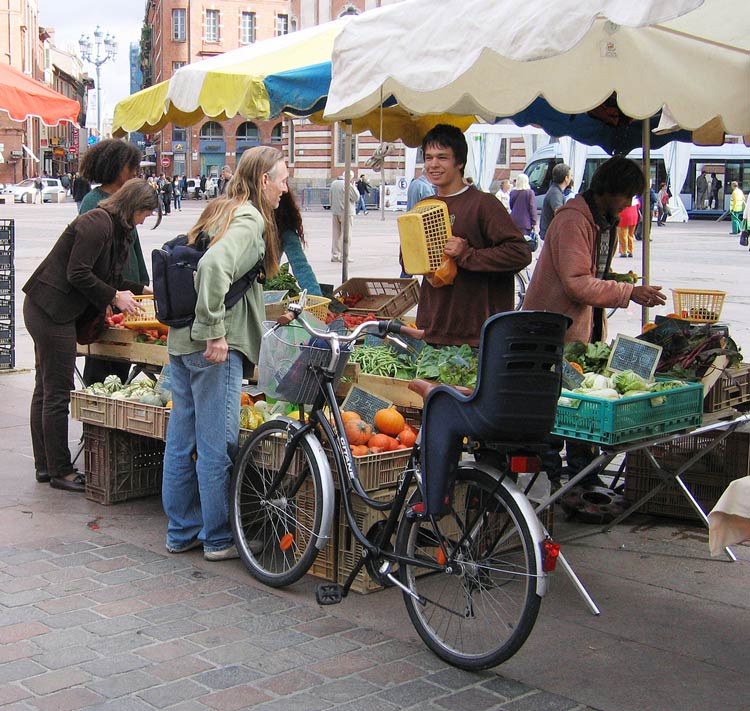 Despite the fact that one of France’s best-known and loveliest cycle routes – the Canal du Midi – ends in Toulouse, there's much more in the area for cyclists. Toulouse is both beautiful and cycle-friendly (UK cyclists will be amazed at the give and take between pedestrians and cyclists who seem to co-exist harmoniously on quiet backstreets and pavements without any apparent conflict or many rules of the road).

The area to the north-east of Toulouse would make a great touring area if you want to go traffic-free: the Montauban-Albi-Castres loop makes a fine and relatively easy 180-mile tour, around 120 miles of it traffic-free and with the rest on quiet roads.

Alternatively, Albi is a fine city for fixed-base touring, or you could also opt to base yourself in Montauban, Toulouse or Castres. 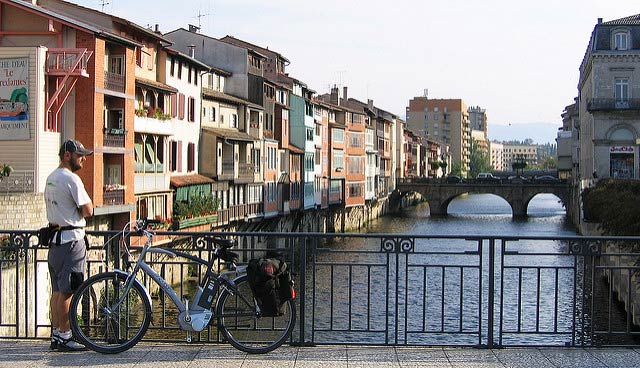 A moment of reflection in Castres. Photo: Richard Peace

When to cycle in the Midi-Pyrénées

Weather-wise, the area described here is amongst the sunniest in France, though summer can bring scorching temperatures that will be too hot for many to ride in. Spring and autumn are the best seasons for riding (autumn especially, as it tends to be drier than spring) but short, heavy rainbursts can occur throughout the year.

Toulouse itself is great for exploring by bike – it's made real strides to make itself cyclist-friendly in recent years, even though it's layout of ancient streets was quite-cycle friendly in the first place. There's now a cycle-hire scheme, VélôToulouse (in French), with a staggering 242 hire stations throughout the city, as well as many one-way streets for motor traffic that are two-way for bikes.

The warren of pedestrianised streets south of the huge and very beautiful Place du Capitole are a busy mixture of pedestrians and cyclists and there are lovely rides alongside the Garonne river, lined with historic buildings and green spaces.

Further afield, you might want to bike and train into the French foothills (take the train up to Montréjeau to explore the area around the spectacularly located cathedral of St Bertrand de Comminges) and use the signed Véloroute de la Garonne to cycle back down to Carbonne, from where you can get a train back to Toulouse. There's also a pleasant ride to the west of the city along a greenway to the forest of Bouconne. 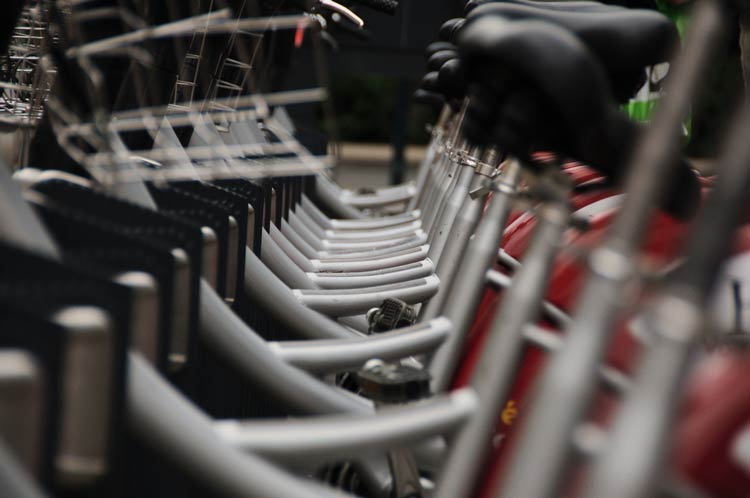 A canal towpath (Canal Lateral a la Garonne) will take you out of Toulouse and north to the gorgeous centre of Montauban, reached up a branch canal from Montech, home of the impressive 'pente d'eau', a kind of moving slice of canal – see for yourself and all will become clear! The centre of Montauban itself is the Place Nationale, surrounded on all sides by magnificent arches and well worth a night's stop.

From Montauban you can follow quiet and easygoing roads up the Tarn valley towards the towering presence of Albi's cathedral (a signed cycle route, the Véloroute de la Vallee du Tarn, heads east up the valley from St. Sulpice, though you can use quiet roads alongside the Tarn to get to St Sulpice itself).

This is the area of Bastides or fortified towns, made of crumbling red brick and with castles, fortifications and churches of a style all their own. Though it's not particularly a tourist area and attractions are low-key, it's great easygoing touring country where you are likely to have the roads to yourself, passing through an area that has very much its own character, coming from a mix of a medieval past (the Albigensian Crusades were fought here in the 13th century) and later small-scale industry. Disarmingly, industrial and religious buildings are often built of the same red brick. 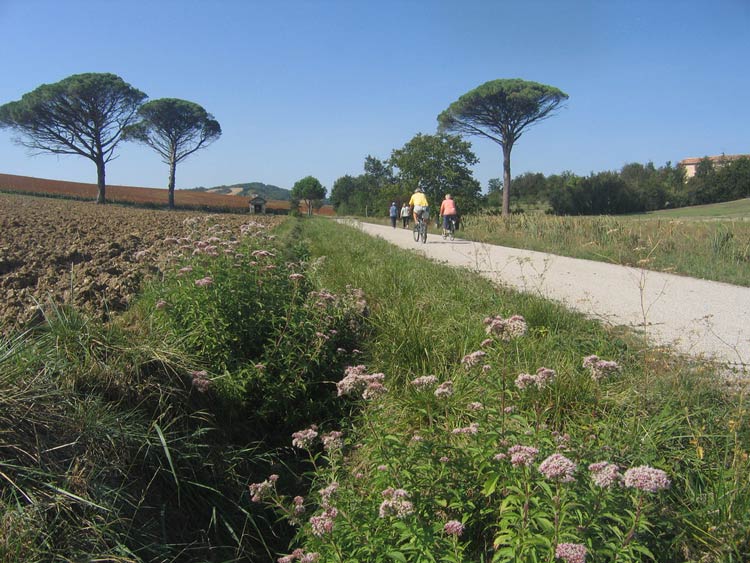 The very high quality traffic-free route between Albi and Castres is a breeze, and is complete with benches and water points, highly useful if you are struggling in the heat of the Midi. It emerges near the centre of Castres, which boasts a lovely view down the river Agout and a grand central square, ideal for a refreshing beer. There's plenty of history here too, from the Goya museum to that of Jean Jaurès, a much-revered political orator who was shot on the eve of World War I for his pacifist views.

Another stretch of quiet roads on signed Véloroute takes you to Revel, home to a huge 19th century covered market. From here you can pick up the canal feeder route for the Canal du Midi – this is a well-surfaced traffic-free route up until Lenclas lake, which lies south of St Félix-Lauragais. From here, you will need a mountain bike-style tourer to stay on the traffic-free path (or alternatively minor roads can be used to follow the line of the irrigation channel in any event), all the way to the Canal du Midi.

From here it's an easy ride back up the canal towpath (unsealed but decent quality) all the way into the heart of Toulouse. 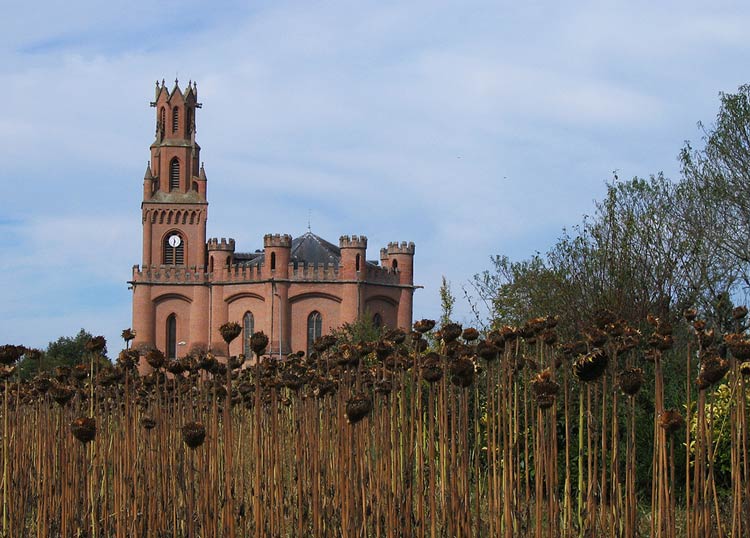 The Church of Notre Dame de la Dreche above Albi in the Tarn department of the Midi-Pyrénées. Photo: Richard Peace

A day ride around Albi

The standout attraction near Albi is the village of Cordes-sur-Ciel on the 40-mile signed route, the Circuit des Crêtes. This follows minor roads through an undulating, wold-like landscape, to reach the hilltop bastide town, a remarkable sight when rising from a sea of early morning mist. Close up it is impressive still, but a bit of a tourist trap in season and at weekends.

The return leg passes through a string of pretty villages and the edge of the mining town of Carmaux to pass the incredible Cap Découverte – a quite surreal sight, a huge mined pit, now home to a family attraction boasting cable water skiing, a 100km/h airborne zip wire, 35km of cycle paths, karting and much, much more. Kids (and adults with the minds of kids) will love it.

Before heading backto Albi, check out the mining museum at Cagnac-les-mines and the church of Notre Dame-de-la-Dreche.

If you want bucolic peace and quiet, head up the Véloroute du de la Vallée de la Tarn to Ambialet from Albi. This is quiet cycling country with beautiful panoramas above the gently winding river, the occasional holiday retreat by the river and a grandstand finish at Ambialet, where the river loops back on itself, the spur of land almost enclosed by the loop housing the tiny but spectacular village. 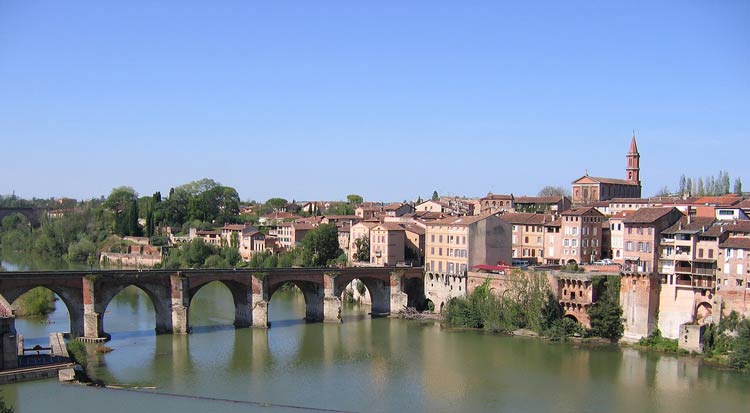 Bike hire in and around Toulouse

In addition to VélôToulouse (French only), the public bike hire scheme, La Maison du Vélo comes highly recommended. Other options include Recycles and Cyclable Toulouse. 2 Roues Vertes specialise in electric bikes. Check also the VélôToulouse site for options outside Toulouse and along the Canal du Midi. Our bespoke bike hire service can also help you with bike hire for Toulouse, including one-way with delivery or pickup in Toulouse.

In Toulouse, the Crowne Plaza is very bike-friendly and has a manager who is keen to welcome more cyclists. Adagio has an apart-hotel with self-catering rooms, while the stylish Hôtel Le Père Léon and Ibis are mid-range 3-star options. The more upmarket Mercure is at the junction of the Midi and Garonne canals and the Novotel (also near the Midi) has an outdoor pool. Meanwhile the Hotel St Severin, 69 Rue de Bayard, Toulouse has room for a small number of bikes to be locked together in the hallway under the watchful eye of the check-in desk. Camping de Rupé, Pont de Rupé, is about five miles out of the centre on the Garonne canal. It's a large, reasonably well-equipped campsite. See Campings Midi-Pyrénées for other options.

In Albi, the Ibis has secure parking and 24-hour reception.

Check here to search our bike-friendly accommodation listings, or zoom in and lick on the icons on the map below for direct links to hotel, B&Bs and self-catered acommodation with secure bike parking.

See also my Cycling Southern France guidebook, available via Excellent Books. For cyclists wanting to follow the region's most popular greenway, there's Cicerone's Cycling the Canal du Midi by Declan Lyons and Biking Along the Canal du Midi by Philippe Calas, which is an English translation of his original French guide. There's also the option of combining cycling with a canal boat break.

For maps, try the IGN's Midi-Pyrénées carte; if you prefer, Michelin have an equivalent.

The Midi-Pyrénées tourist website has a dedicated cycling area, which includes the details of various leisure cycling routes (in English). There's also information for mountain bikers and sporting cyclists wanting to clock up the miles. Toulouse's tourist centre is located on Donjon du Capitole, near the Capitole metro station. For more on Albi, see the official tourist site. There's also more general information on the Association Vélo Toulouse website, though useful only if you can read French.

Richard Peace is founder of Excellent Books, specialists in cycle publishing. He has made several tours of France (including on electric bikes) and is author of Cycling Southern France, Cycling Northern France, and Electric Bicycles: The Complete Guide. He is a regular contributor to bikeradar.com and A to B magazine.