Nothing quite beats the feeling of waiting in the French countryside or at the top of a mountain for the Tour de France to roll by. Roger Dunne* has this guide to watching the world's largest annual spectator event.

A front row view in Brussels in 2010. Photo: Kmeron

*** We strongly advise getting a copy of the Official Tour de France Race Guide to help your planning. It has all stage times and maps in one place. It sells out every year so order it early. ***

The Tour de France has grown over the years to be known as the greatest race on Earth. The sheer endurance needed to ride an average of 100km for a duration of three weeks in some of the most physically challenging terrain is testimony to the riders passion, drive and commitment to the sport.

For the French, the Tour is a national celebration and it is a great honour for ones town or city to be chosen as a host venue. Every year hundreds of thousands of spectators line the streets of every village, hamlet and roadside to be part of  the colour, smell, noise and atmosphere.

The Tour is also a great tourist attraction with fans coming from all over the world. There is such a build up to the race coming through and its important to get to where you want to see it at least two hours before as the gendarmes close the roads in preparation.

First through is the publicity caravan made up of many of France's major brands in dedicated vehicles advertising their wares and giving away free gifts. It's great fun trying to grab the freebie chocolates, key rights, and race caps from the moving vehicles but be careful not to get caught in the stampede. It's quite amazing what people will do to get a free gift! The caravan lasts about 45 minutes and is entertaining for the spectators who may have waited many hours to catch a glimpse of the riders. In fact, one survey found that 39% of spectators come to see the publicity parade rather than the actual riders. 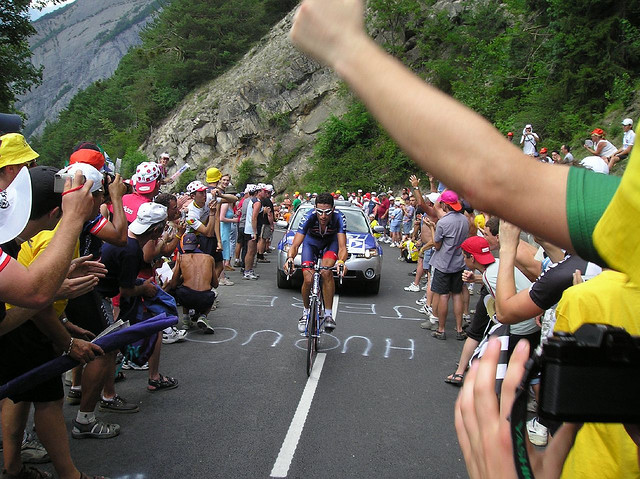 George Hincapie is cheered up the mountain in 2004. Photo: bryan88

The mountain stages in the Pyrenées and the Alps are always a magnificent spectacle where thousands of people flock and create a great atmosphere. These stages are always popular as often you can see the pre-race cavalcade followed by the riders. The incline of the mountain naturally slows down the passing cavalcade and race so that its spectacle is slowly absorbed by the crowd.

It's also worth noting when the rest days are, as these give you a chance before or after a stage to see more of the surrounding area or to travel on to another stage. 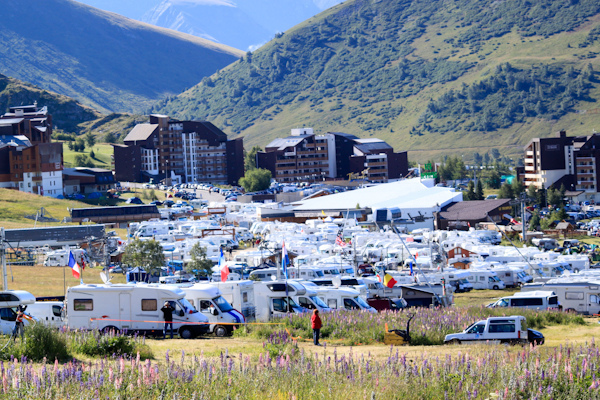 The sheer number of people from around  the world that follow the Tour means the minute the Tour route is announced there is a rush to book accommodation, cycling holidays following the tour, car hire etc, so make sure you make arrangements as early as possible.

Zoom into the map below to find accommodation on your section of the route. It's a work in progress and we're adding to it all the time (suggestions welcome via lyn@freewheelingfrance.com).

You can also browse bike-friendly accommodation across all of France via our Where to Stay section.

If you're planning on camping out on top of the more popular mountains, try to arrive a good two days prior to the race coming through to get a prime parking and/or camping space.

Once you have decided where you would like to see the Tour, check prior to arriving – or with the local tourist office as soon as you arrive – to see which roads are going to be closed (and when). You also need to find out what time the stage will be approximately coming through at the place you  hope to see it.  If you are following a particular stage on bike, it may be advisable to ride the route the day before to familiarise yourself with how long it will actually take so you don’t miss the race going through.
I try and log Tour de France road closure information here as it comes to hand each year.

*** We strongly advise getting a copy of the Official Tour de France Race Guide to help your planning. It has all stage times and maps in one place. *** 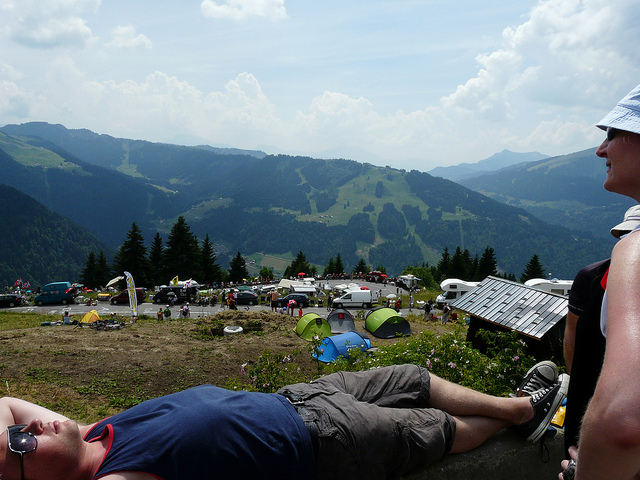 Waiting for the peloton. Photo: bishib70

What to take with you

*** Again, we strongly advise getting a copy of the Official Tour de France Race Guide to help your planning. It has all stage times and maps in one place. ***

It's advisable to bring as much water as possible with you as it is the summer and will generally be hot and sunny, particularly the further south you go. If you are on bike or even following the race in a car, it might be wise to take a small packed lunch with you as the French are very strict on when they serve food – generally 12-2pm and it may be difficult to find anything outside those hours, particularly if you are in a rural village. You should also bring sun cream, hat, camera, video camera , mobile phone and if you  are going by bike some form of identification, even if its a hand written note of your name and contact telephone number in case of accident.

It can be hard to find a high-spec road bike to ride Tour stages before or after the peloton. Bike hire, like accommodation, tends to get booked up months in advance, particularly on popular mountain stages. Away from the mountains, standard road bike or hybrid hire is easier to find, but high quality carbon fibre bikes can still be difficult to find outside well-known road cycling areas. For bike rental options across France, see our bike hire pages. It is also worth considering bicycle hire services that deliver to your door. If you are taking an organised cycling holiday in France to tie in with the Tour de France, your tour company should be able to arrange bike hire for you.

If you're going to a stage by bike and need to park it up by the side of road either keep a very close eye on your bike or preferably bring a chain to lock it up. The majority of spectators are there to see the race but there’s always the opportunistic thief, so just have your wits about you.

If you're cycling to one of the mountain stages, you will be climbing the mountain with thousands of others which is a great experience as everyone is cheering everyone else on. However, the descent after the race can be nerve wracking as you are again surrounded by thousands of cyclists of all abilities and also pedestrians, cars and other vehicles, so again, be careful and be sensible.

Many people plan their whole year around following the tour and make a holiday out of it taking in the atmosphere in the lead up to the stage coming through, so just be organised. Also keep an eye on the weather forecast to ensure you're kitted out for rain or sunshine.

*Roger Dunne was a retired semi-professional cyclist who represented Great Britain and rode with teams in France and Luxembourg. An early supporter of Freewheelng France, he passed away in 2015. His partner Teresa Harte continues to run Velo Vercors.