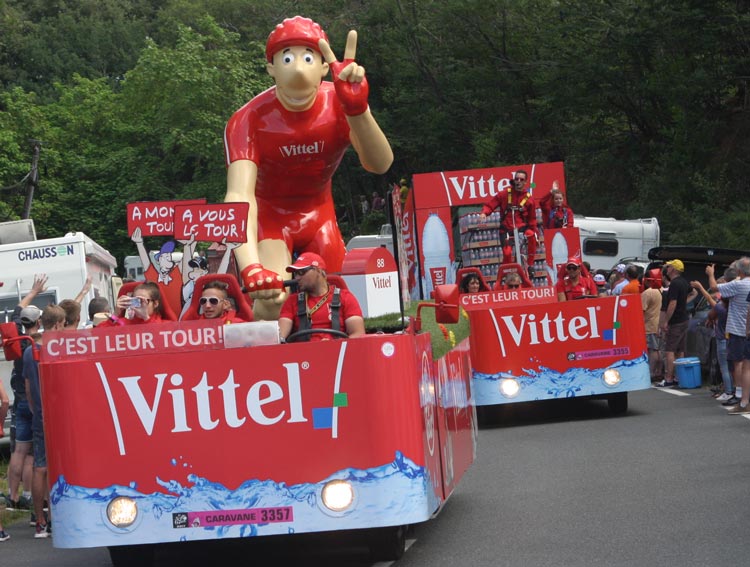 OUT NOW: Get the official 2020 Tour de France Race Guide

The full route of the 2020 Tour de France was announced on October 15, 2019. It has since been revised, with the dates changed in reponse to the coronavirus pandemic.

The overview of the route and the new dates are shown below. 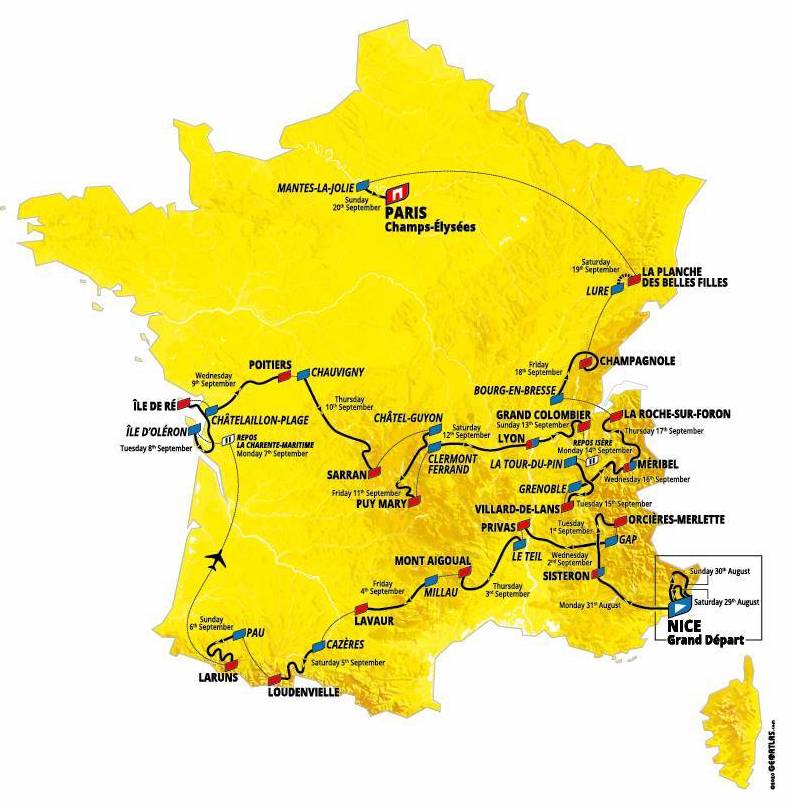 The Grand Depart will see two stages based around Nice, capital of the Provence-Cote d'Azur region on the Mediterranean coast. The terrain around Nice is incredibly varied – expect some stiff climbs, flat sections and scenic coastal roads.

Specific info on each stage and more detailed maps are usually published each May in the official race program. We'll post links to it when it's released. We have this page for Tour de France road closure information, which we also update as information comes to hand (usually not from around May onwards).

OUT NOW: Get the official 2020 Tour de France Race Guide 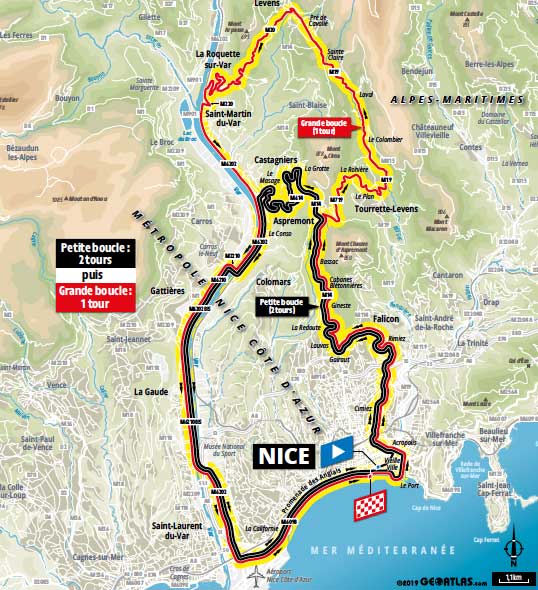 The first stage is interesting because unlike most sprint stages (other than Paris), it offers more than one chance to see the riders whiz by. Here, riders will do two loops of the southern section through the city. This is not a flat stage by any means, but it should still see a sprinter take the first yellow jersey. 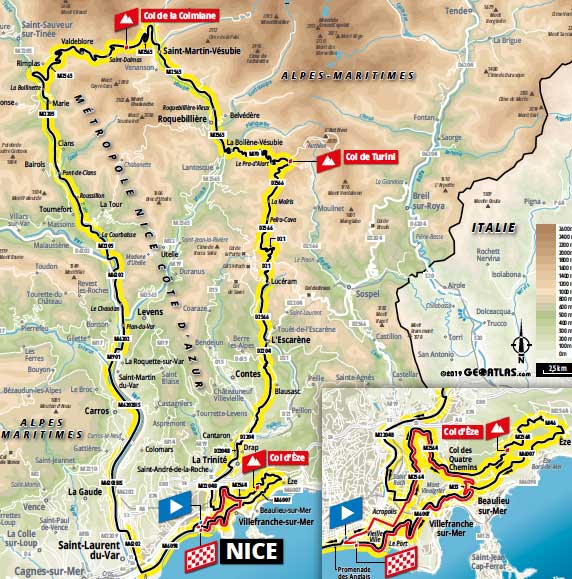 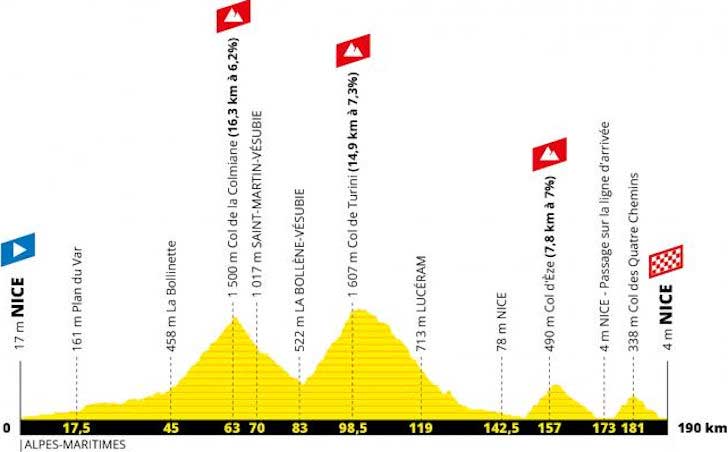 If a sprinter does take the yellow jersey on the first stage, then it may not be on his shoulders for very long. The second stage contains three cols, two of which are above 1500m,with a total of over 4000m of climbing. Again, this is a showcase stage for Nice and will allow spectators to easily catch a second stage without moving very far.

Goodbye Nice, hello Sisteron, which gets a stage finish a well as a stage start this year. This is a flat stage with a bit of rolling terrain thrown in for good measure. Expect a sprint finish.

An early summit finish in Orcières-Merlette, a ski resort at the end of a 7.1km climb (6.7%). Orcières-Merlette will enjoy its day in the sun – it's been more than 30 years since the Tour visited these slopes.

The gap is no stranger to the TDF – expect a strong showing here from the breakaway riders, followed by a sprint finish.

From the Rhone River at Le Teil and into the Ardèche, stage 6 will be another feast for the TV cameras. The last 26 kilometres run mostly uphill, providing plenty of great spectating opportunities on smaller climbs: the Col des Mourèzes (6km at 4.8% average gradient), the 11.7km Col de la Lusette (7.3%) and, finally, the Mont Aigoual 8.3km at 4%).

The stunning Millau viaduct makes a TDF comeback, with the start set against its incredible backdrop. Stage 7 will be a preclude to the Pyrenees, the lumpy Aveyron and Tarn valleys providing some hilly – and potentially windy – riding. 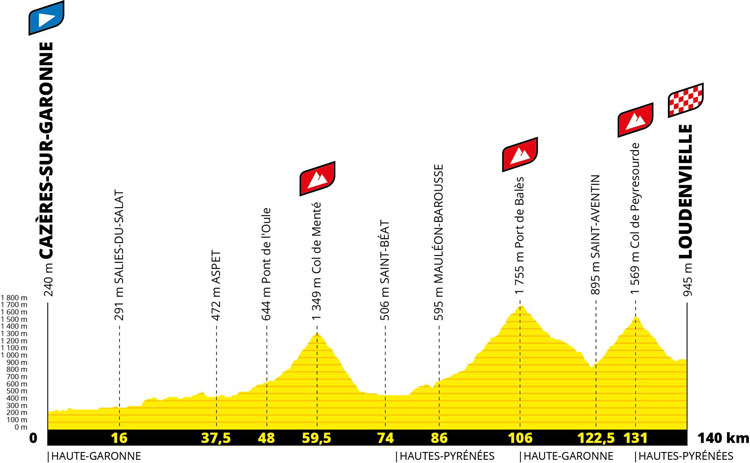 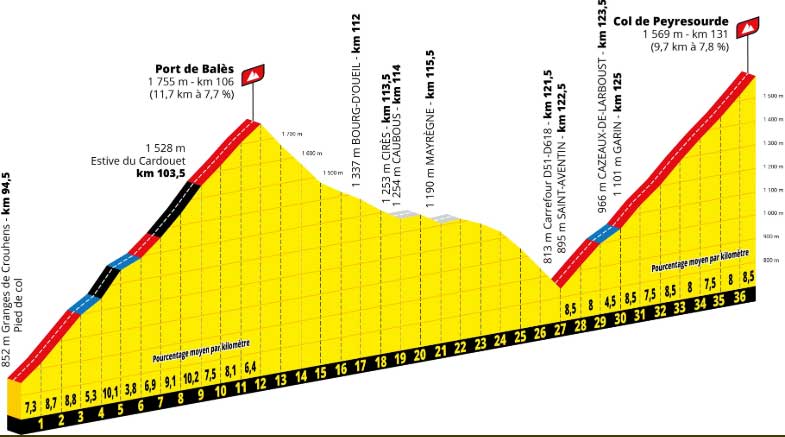 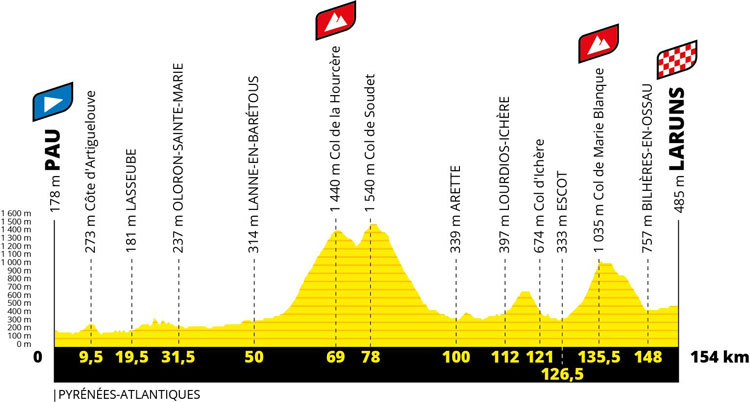 The Charente-Maritime department will host two stages plus a rest day, making this an ideal place to grab some rest and relaxation (and to indulge in the region's famous oysters and coastal resorts). This section of the Tour is being marketed locally as 'The Maritime Escape'.

Click here or the images below for a PDF version of the Stage 10 route and timings. 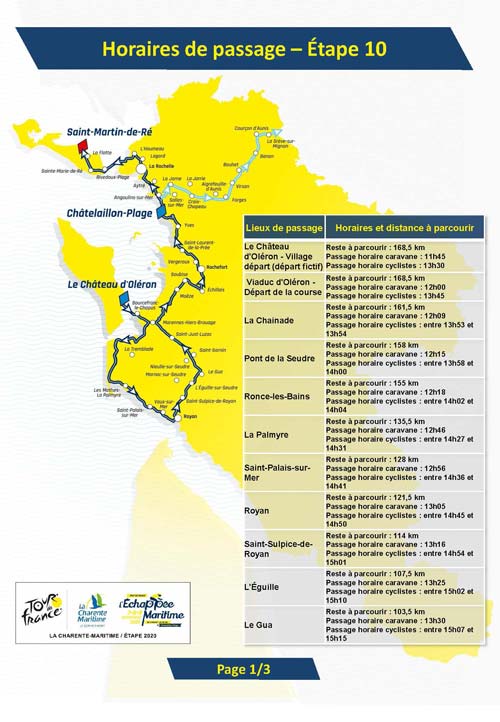 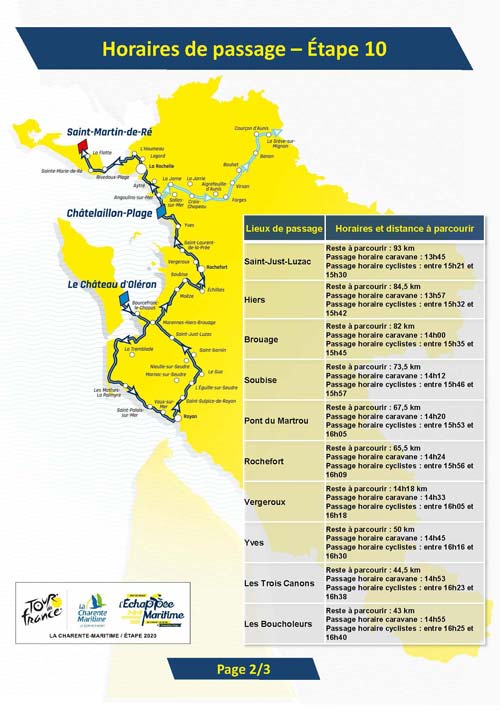 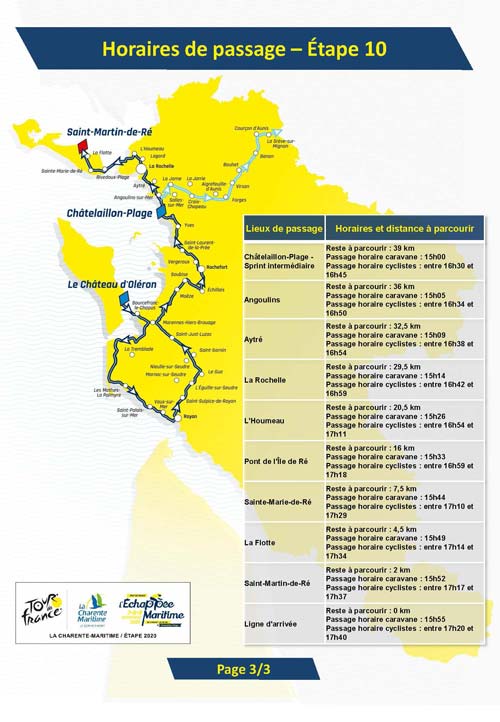 The Tour heads inland through the marshlands of the old Poitou-Charentes region (now absorbed into the larger Nouvelle-Aquitaine). This should be another stage for the sprinters in Poitiers – the last 1.5km should be familiar to Arnaud Démare, who won the French title here in 2014.

Click here or the images below for a PDF version of the Stage 11 route and timings. 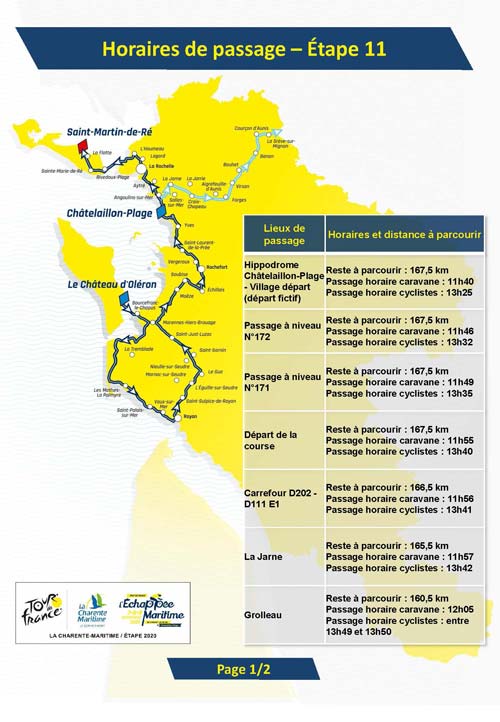 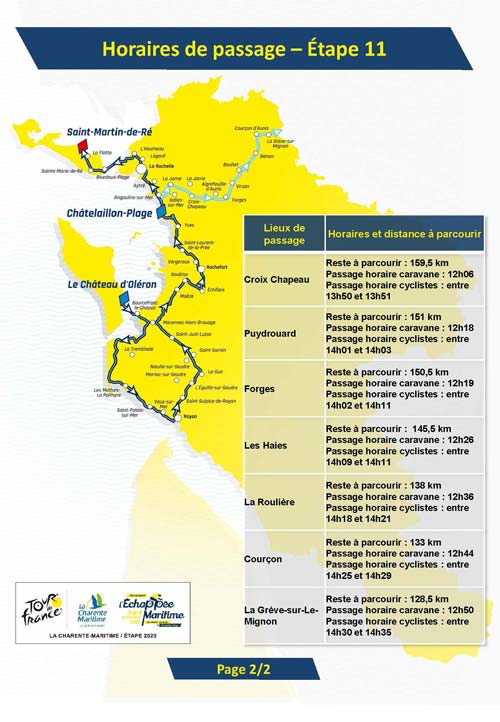 This one will be targeted by the breakaway riders – the hilly course across rolling countryside is also the longest stage of the 2020 Tour. The Vienne valley is picturesque and unspoilt - it will be a real treat for the TV cameras. 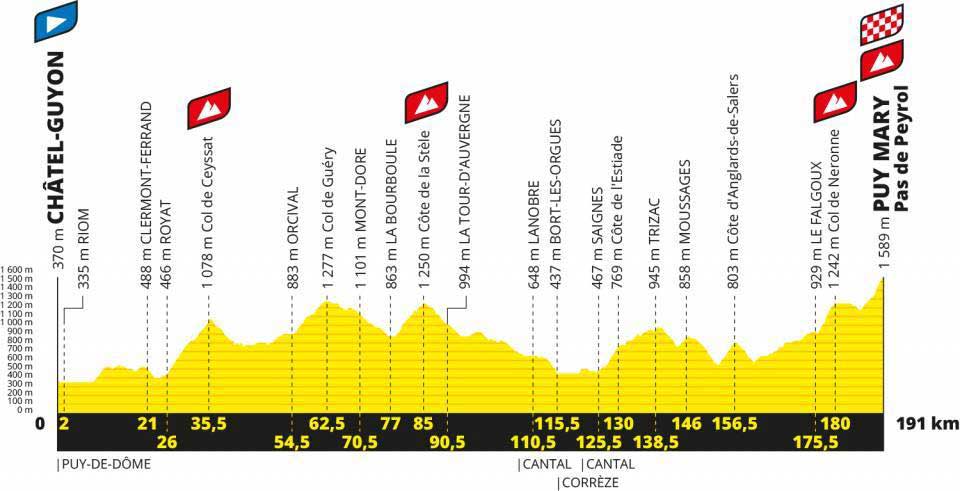 Stage 14 leaves Clermont-Ferrand and goes via the Monts du Forez and Col du Béal (at the start end) and comes in via the Côte de la Duchère (about 15km from Lyon). Closer to Lyon it includes the Montée de l’Observance and the Côte de la Croix-Rousse (5km from Lyon). These late cols would be good places to be if you are staying at the Lyon end. It finishes in the Lyon city centre.

Stage 15 has a focus on the Jura Mountains. It's a 175-km stage that starts in Lyon and finishes on the Grand Colombier after already climbing the same mountain twice earlier in the stage from different sides: via the Montée de la Selle de Fromentel, via the Col de la Biche and then finally up from Culoz. They will deserve a rest day after that. 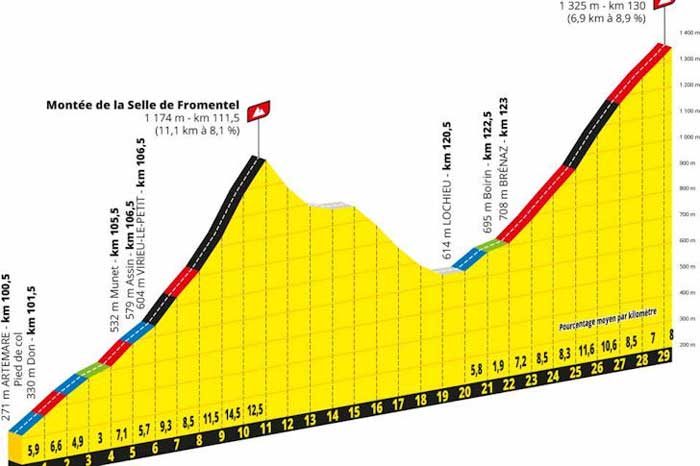 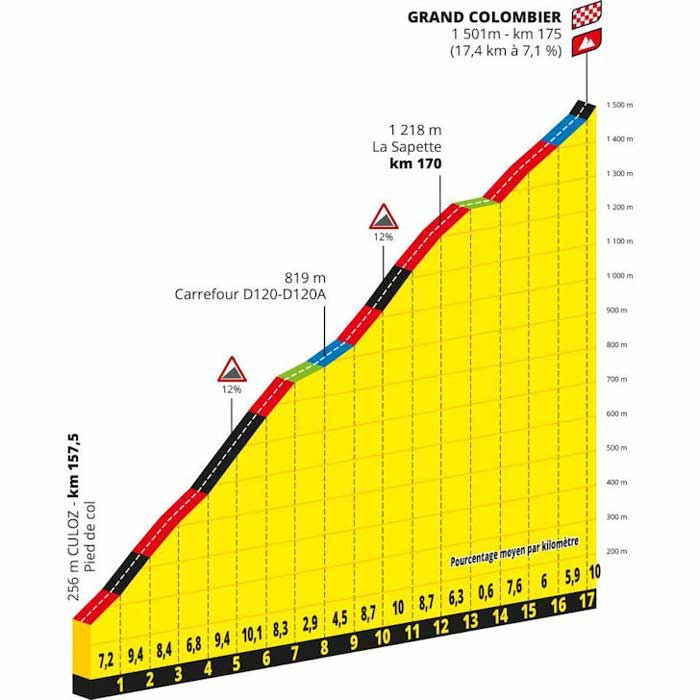 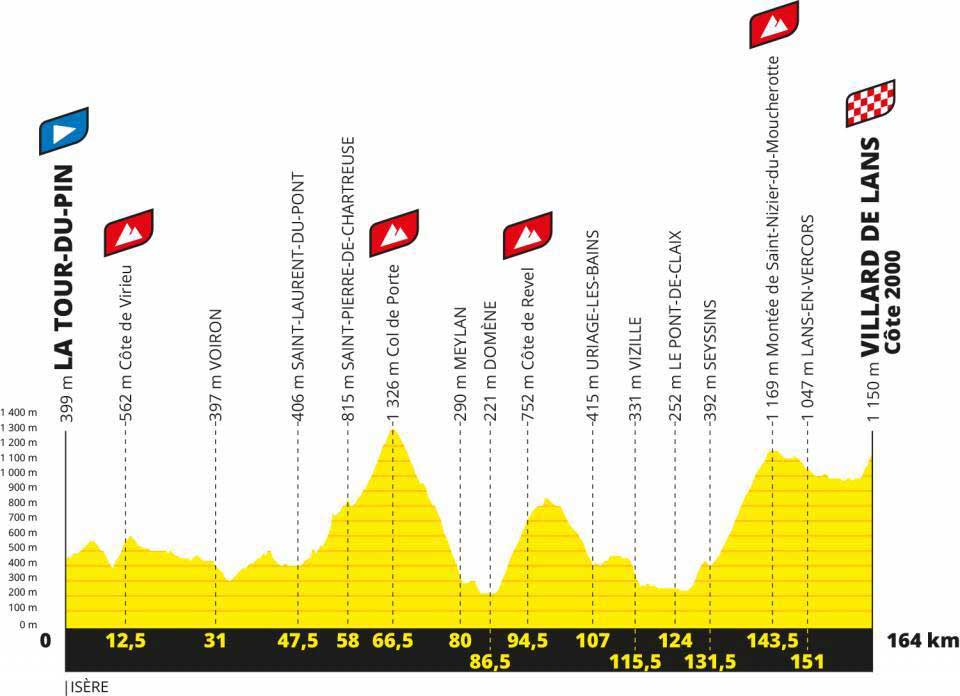 Stage 17 ends on Col de la Loze, above Méribel. It will be another epic mountain-top finish with a 22.5km climb rounding off the day (including several sections topping 20% gradient). En route, riders will cross the Col de la Madeleine – no easy warmup ride, coming in at an average of 8.4% over 17.1 kilometres. 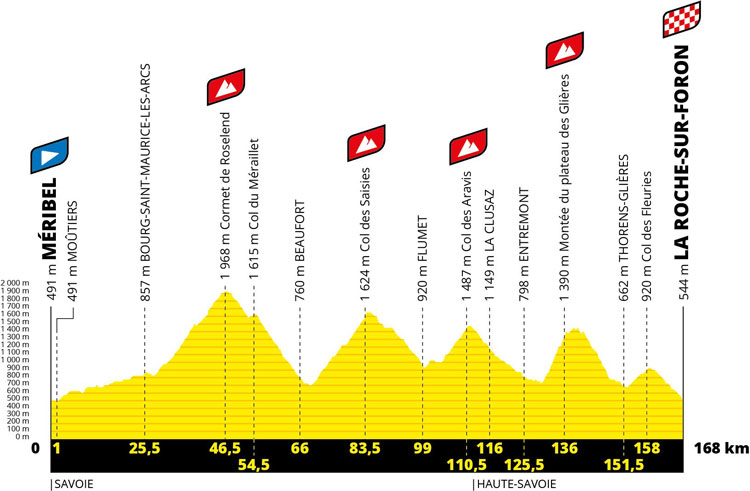 Stage 19 looks set to be a late sprinters' stage from the Jura's foothills to Champagnole and the river Ain. 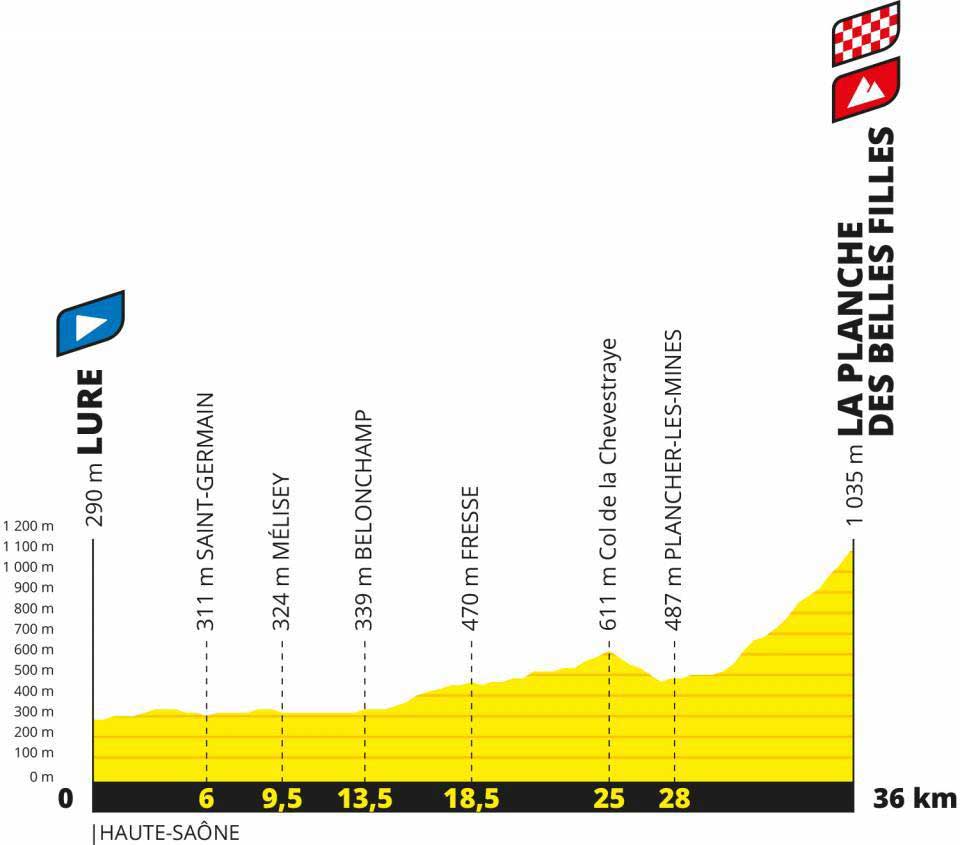 OUT NOW: Get the official 2020 Tour de France Race Guide: This collates all stage maps and race times into one booklet.