What's the different between a véloroute and a voie verte when you're cycling in France? And are they car-free? We explain the differences. 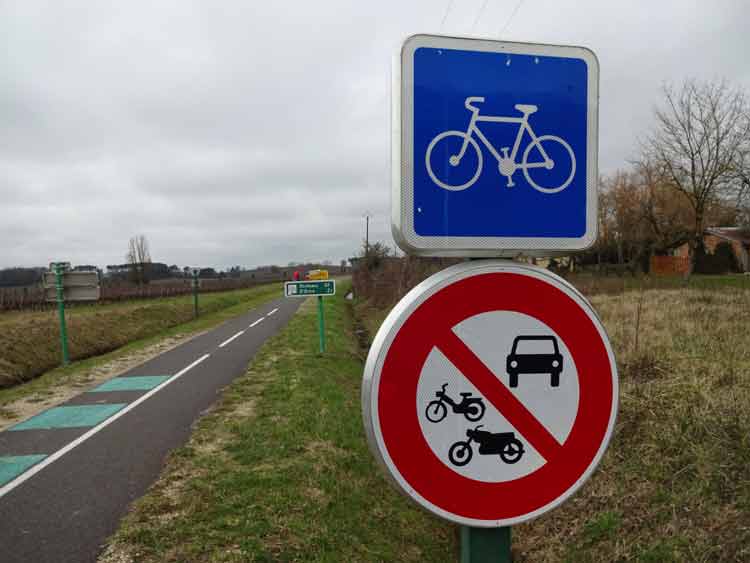 The term voie verte is written into the French Highway Code (Code de la Route) and must comply with national standards, such as carrying relevant signage, and being within certain width and quality parameters.

I'm often asked to suggest bike routes in France that are entirely "car-free". My answer usually comes with a caveat: that many backroad routes in France don't need to be "officially" car-free because they are ordinarily very quiet and, in fact, dedicated cycling infrastructure if not needed.

There are many and varied "safe" cycling routes in France. Here is a brief guide to how to tell which ones do and don't have cars.

Voies vertes are also called 'greenway' routes. They are most often canal towpaths, river towpaths or railway lines that have been converted for bikes/walking. They need to have been routes specifically set aside and maintained for non-motorised traffic (cyclists, walkers, rollerbladers, horse riders, etc). 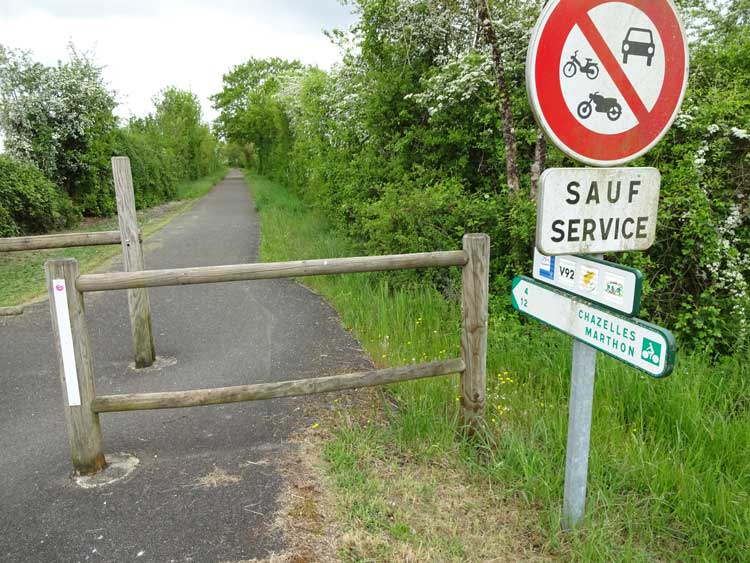 Voie vertes must be properly signposted and have the relevant infrastructure in place to restrict motorised traffic.

Generally speaking, a voie verte will be shorter routes (usually shorter than 50km, though there are some exceptions). They also need to be (almost) deadpan flat. Gradients need to be below 3%, though I have rarely ridden one above 2% for any significant length of time. For this reason, they are excellent choices for families, newer cyclists, or riders who simply want a leisurely hill-free day out.

The term voie verte is written into the French Highway Code (Code de la Route) and must comply with national standards, such as carrying relevant signage, and being within certain width and quality parameters.

Bear in mind that 100% car-free routes along vast distances are logistically challenging (and expensive). If you are researching a multi-day long-distance route you may need to compromise at some point and combine voies vertes with véloroutes (see below) or backroads riding – if only to 'link' between different canals or greenways, or to access accommodation and amenities.

If you see this sign, you are on a voie verte: 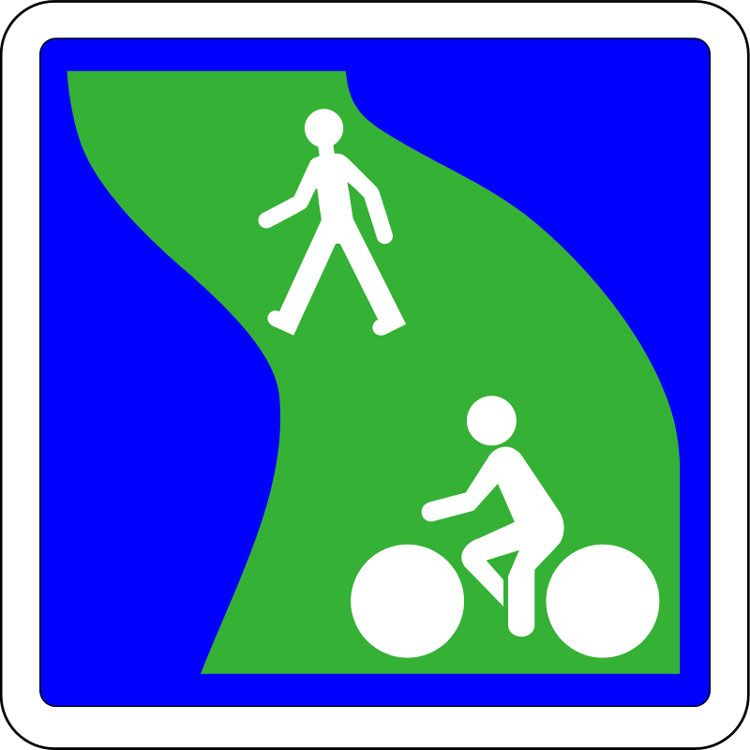 Most signposted/official long-distance routes in France can be loosely designated as véloroutes.

A véloroute is a longer distance route that combines car-free cycling with stretches of quieter backroad riding. For example, on one véloroute you might get a stretch of voie verte (see above) and then a stretch of quiet backroad riding on D-roads (shared with cars), followed by a forest trail or a piste cyclable (see 'Other terms' below) that's been segregated along a main road.

Véloroutes may include hills or different terrain (e.g. rougher off-road sections), but they are generally geared towards cycle touring. All EuroVelo routes (see below) are also véloroutes.

Here are three photos of the same véloroute – La Flow Velo, which links the Atlantic coast to the Dordogne. All three photos were taken on the same day on the route outside Cognac. You can see the surface quality varies vastly. The first one is a rougher river 'trail', the second is a top-quality river towpath, the third is a beautifully paved tarmac road with traffic so infrequent I can barely remember passing a car. 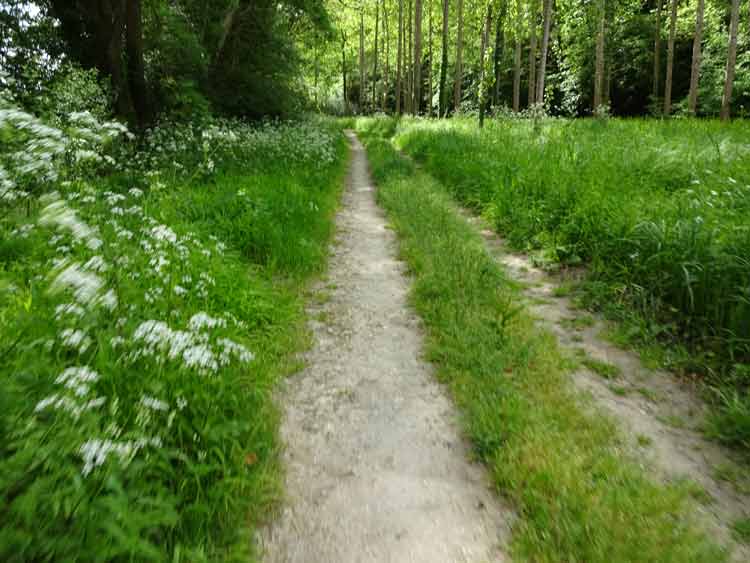 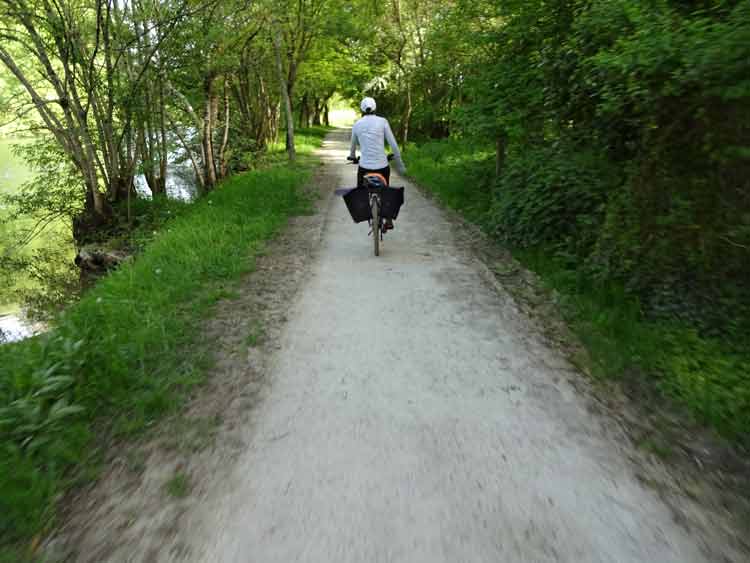 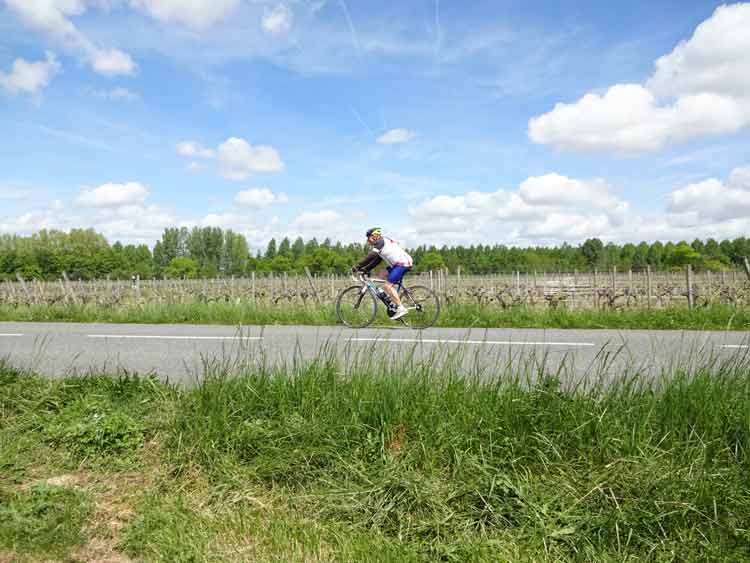 Routes such as the Loire Valley EuroVelo 6 and EuroVelo 1 Atlantic Coast La Velodyssee route are largely car-free but not necessarily 100% for the whole route. They may use local roads for 'linking roads' or use shared roads where no dedicated cycling infrastructure exists. They may also have forest trails or other 'rougher' sections that are car-free but which don't meet the French Highway Code's definition of a voie verte. They are therefore véloroutes and not 100% car-free voies vertes, but they are still signposted bikeways that are safe and well-stocked with accommodation, etc. In fact, despite being NOT being 100% car-free, you would go a long way to find two routes better suited to all abilities cycling.

Véloroutes will often be signposted using local signage and any official route name. Often one route will cross with another or run concurrently.

Picture 1 below near Rochefort, we have the EuroVelo 1 (orange and blue marker) and La Flow Velo (blue and green marker) running concurrently. Both are long-distance routes routes that cross regional borders.

Picture 2 below en route to Jarnac we have the inter-regional La Flow Velo again (green and blue marker) running concurrently with the Tour de Charente (yellow and green marker), which is more of a local/regional route long-distance route. 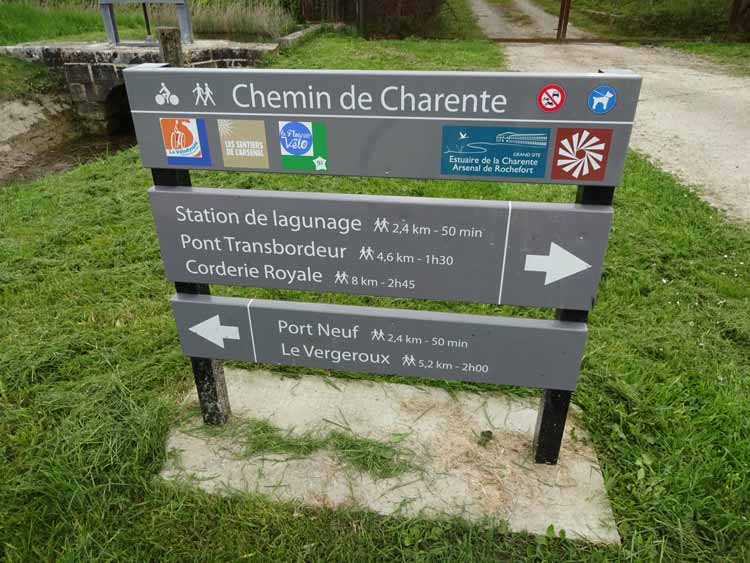 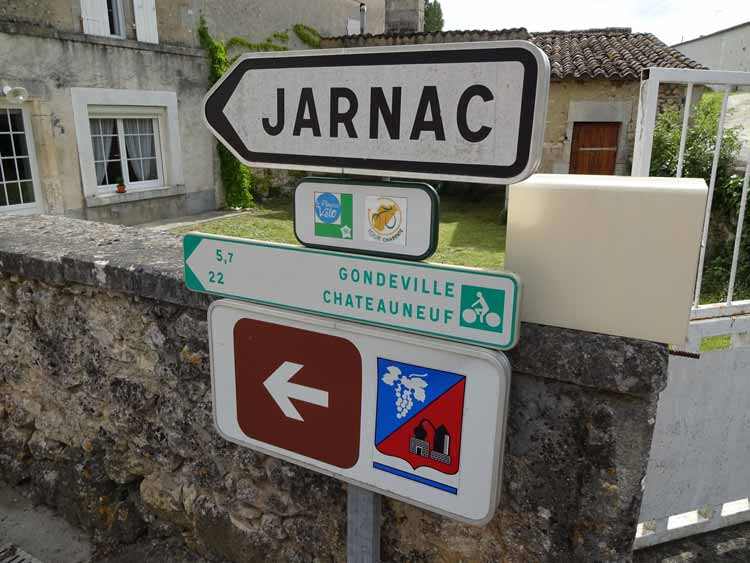 It is worth bearing in mind that many small regional towns and cities may not have signposted 'official' véloroutes but the backroads cycling is still perfectly safe via local rural roads and D-roads.

In fact, in many areas of France dedicated cycling infrastructure is not available because it's simply not necessary: local roads are quiet, very safe and used regularly by local riders. On many roads near where I live, I can easily find backroad routes on which I rarely pass any cars (tractors are sometimes more prevalent!)

What is a 'EuroVélo' route?

This is a network of European long-distance routes that cross international borders. The network is overseen by the European Cyclists' Federation but the routes themselves are managed and maintained locally.

Briefly, they need to have cycling accommodation in every 50km stretch and regular opportunities for food stops. They also need to be relatively flat (gradients less than 6%) and be contained to quiet backroads routes with minimal traffic. At least 80% of the entire route should be on hard/paved surfaces.

All EuroVelo routes in France are also véloroutes.

And just to cause maximum confusion, the French tourism authorities also give French sections of EuroVelo routes their own local names. So the EuroVelo 1 Atlantic Coast route is also called La Vélodyssée through France; the French section of the EuroVelo 3 Pilgrims' Route is called La Scandibérique; EuroVelo 6 Atlantic-Black Sea is also called Loire à velo (this one is the most understandable given the Loire route is France's 'original' long-distance route and actually predates the EV system).

For more on EuroVelo routes in France, see here.

The Boucle du Lion at Lacanau forms part of the EuroVelo 1 Atlantic Coast La Velodyssee route. 'Boucle' is a local term for 'circuit' or 'route.

Piste cyclable: A bike path reserved for cyclists that's separated from other traffic. For example, it may be a dedicated cycle lane or a section of a footpath that's been marked for cycling. It's essentially a 'generic' name for a dedicated bike path.

A voie verte is an example of a piste cyclable, however, not all pistes cyclables meet the criteria for being a voie verte.

Bande cyclable: A section of the road that's marked for cyclists. For example, a dedicated cycle lane that's been segregated on a road is an example of a bande cyclable.

Voie partagée: A road that is shared between cyclists and motorised traffic. In theory, every road technically doubles as a voie partagée, but you will especially see signs marked voie partagée on sections of a véloroute that are shared with cars, or on local roads that see a lot of cycle traffic.

Boucle: Not an 'official' road type but a word used to mean 'circuit' or 'route' that's nearly always used in a very local context. You will often see local 'boucles' signposted or traced on local tourism maps.

How signage and maps may differ (and confuse you)

Names may differ on different maps and signposts. Signage may differ because routes are managed locally but included on national or international networks, which can often lead to confusion. As the photo below illustrates, multiple French terms can also apply.

You can see on the sign below that the Canal de Garonne is called a 'voie verte'. It is also in fact a 'véloroute' because it forms part of a long-distance route, the Canal des 2 Mers bike route from Bordeaux to Sete. It could also be described as a piste cyclable, so all 3 terms apply.

The Roger Lapebie route that links Bordeaux to Sauveterre is signposted as a 'piste cyclable', but it is also officially designated a 'voie verte' as it is less than 3% in gradient and it's had all the relevant signage and quality checks to meet the national voie verte criteria. And just for some icing on the cake, it is also part of the Bordeaux-Sete Canal des 2 Mers véloroute. 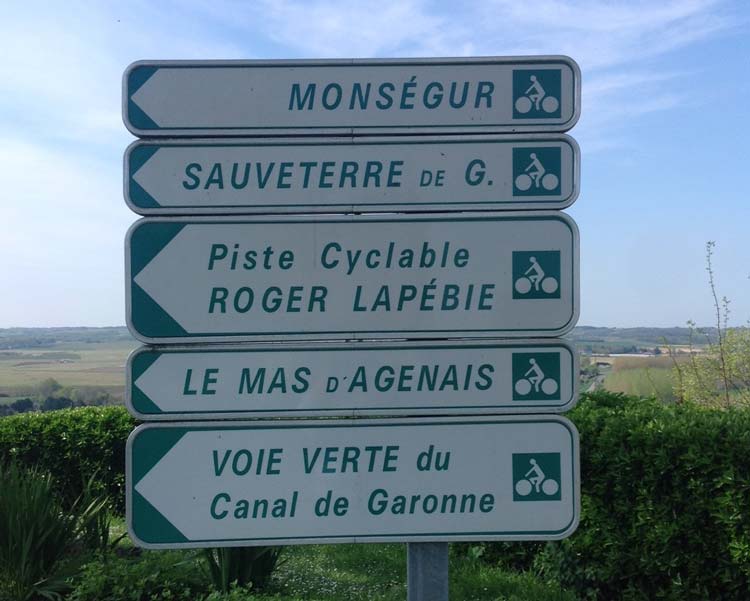 Have any questions? Shoot me through an email at lyn@freewheelingfrance.com or join our Facebook group.