Trains to France - A Guide for Cyclists

Planning on taking the TGV or Eurostar France? Here's our guide to getting you – and your bike – to France by train for your cycling holiday. By Lynette Eyb.

UK-based cyclists have two train options: the Eurostar train from either London St Pancras or Ashford to Lille or Paris, or the Eurotunnel from Folkstone to Calais. Cyclists travelling to France from elsewhere in Europe can take advantage of the Continent's excellent fast-train network.

Make sure you check the train operator's cycle carriage policy before booking – you may need to book a spot for your bike (which may need to be bagged for travel) as well. 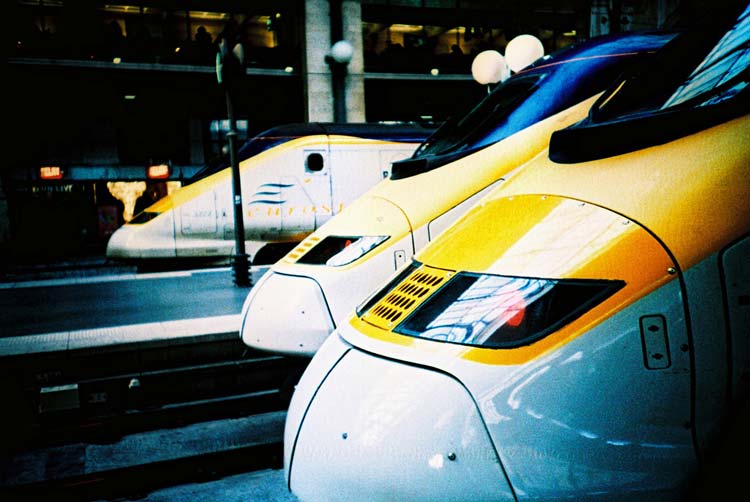 Eurostar has regular services from London Pancras and Ashford International to Paris, Lille, Avignon and Disneyland Paris; it's also possible to catch it to Paris or Lille from Brussels.

Bikes are accepted on Eurostar services but the bike policy has changed several times in recent years and can be confusing.

We have this Eurostar how-to guide.

In short, you have several options for taking your bike by Eurostar, but each depends on the size/type of bike, and also on your destination.

1) Bagged bikes no longer than 85cm can be carried on as part of your luggage allowance on all services, however the size limitation excludes most bikes with the exception of folding bikes and some children's bikes.

2) You can book bagged and unbagged bikes and bikes 85cm-120cm on your train for a fee between London and Paris, and London and Brussels. You can change your reservation if there is no space available for your bike (but the bicycle policy doesn't state whether you will be charged extra to change your reservation even though you are forced to switch trains through no fault of your own).

3) You can't take bikes exceeding 120cm (either assembled or bagged) on Eurostar. You can, however, use a door-to-door baggage service they provide via a partner or see our shipping advice here).

Tickets can be bought directly from Eurostar or from voyages-sncf.com, which also has tickets for onward travel throughout France. See also the excellent Trainline ticket booking service.

The Eurotunnel, from Folkstone to Calais, offers cyclists a cross-Channel alternative to the Eurostar and ferries. It's a drive-on, drive-off service that also accepts walk-on cyclists. Cyclists travelling without cars are charged £16 each way; children with their own bikes are charged the same as adults, but they go free if they are travelling in a child's seat attached to an adult bike. Reservations (which are non-refundable) need to be made by phone – call 01303 282 201, Monday to Friday between 9am and 5.30pm. A maximum of six cyclists are allowed on any one train; cyclists travelling in groups without cars should call the number above to make special arrangements.

Tickets for cars carrying bikes can be bought directly from the website. Prices are calculated per car, regardless of the number of passengers (up to 9).

See the official website for the company's full cycle carriage policy, as well as information on the designated pick up and drop off points for cyclists.

Overnight services to France from the other countries

The Artesia Night train runs between France and Italy; the City Night Line runs from Paris to Berlin and Munich; the Elipsos Trenhotel runs between France and Spain, Italy and Switzerland; and the Lunea runs north-south French routes, as well as services to Spain, Luxembourg and Italy. voyages-sncf.com has more information on each of these options. Again, you can also use Trainline.

The iconic TGV reaches speeds of up to 200mph as it journeys from destinations across France to stations in Belgium, Luxembourg, Italy, Switzerland and Spain. Bikes should be booked ahead (a small charge may apply), or can be taken free of charge in a bike bag. There's more information at TGV-Europe; tickets can also be booked via voyages-sncf.com or via Trainline.

Other high-speed services are operated by:

See our article on taking your bike on French trains for more on the logistics of bike-rail travel in France.