Training for a sportive - 10 tips

Signing up for a sportive? Regular sportive rider Neil Moss has these tips to help your preparation and training. 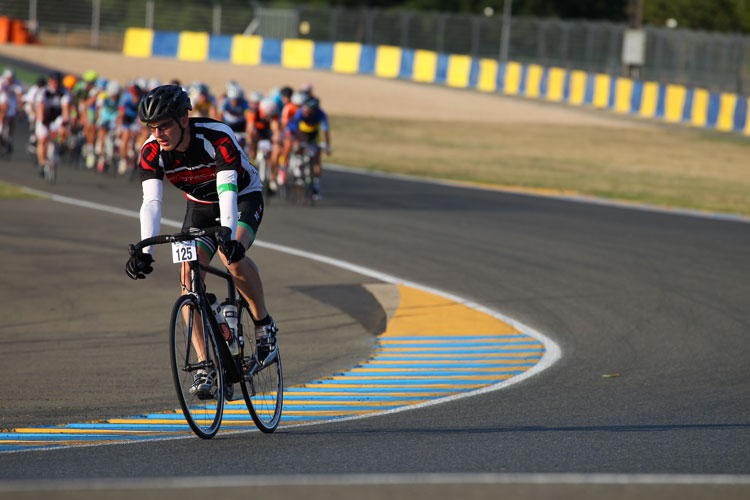 Neil in action at te Le Mans 24-hour sportive, held each August. Freewheeling France rode it in 2016 - here's how we got on. Photo: Maindru Photo

I love riding my bike and feel I should just be able to jump on my bike and go. However, as I’m an engineer to my core, I try to plan ahead and around obstacles, so below are my top 10 steps for approaching a big ride like a sportive.

With training before the event and during the event itself, you’ll be in the saddle for several hours at a time. Get your position on the bike dialed in early in the process. It will avoid discomfort and reduce the risk of injury.

Adjust the saddle height first and then the saddle position. With most road bikes, you can turn the stem upside down to raise or lower the handlebars, and also change the tilt of the handlebars.

Dial in your position early on, and don’t be tempted to change it close to the event.

The same goes for your clothing too – new “race day” kit may have seams or tags in exactly the wrong place for you to literally rub you up the wrong way. Trial all your kit before the event.

Give the bike some attention. You want to have confidence that it won’t give up on you. Give it a clean up. Check that bolts are properly tightened to specification, check the brakes and gear cables slide freely and get the gears indexed properly. Oil that chain. If you’re going for a hilly event, assess whether your gear ratios are appropriate.

Ensure the wheels don’t rub against the brakes, that tyres are free of splits, cuts and embedded debris, and brake blocks/pads are properly aligned.

Learn how to fix a puncture, and carry a spare inner tube and pump.

Don’t put up with squeaks and rattles. The only thing that should make a noise on a bike is you!

In the UK, most sportives let you just roll up with your confirmation number and that’s sufficient. However, in France you will almost certainly be required to present a medical certificate, less than one-year-old and complete with your GP's official rubber stamp, stating that you are fit to practice cycling “in competition”.

We have a full overview of medical certificate requirements – including templates – here.

Sportives often offer multiple routes – short, middle, long. Make a note of the distance at which your chosen route breaks off – they’re often easy to miss if you’re happily crusing along in a bunch – don’t just follow the crowd!

Note the feed stop distances, and ensure you carry enough water to get you to the next one.

If you have a GPS-enabled bike computer, you can often download the official route from the event organiser’s website.

Establish what works for you during your training. You can buy high-tech sports nutrition but they are targeted at “performance” riders. Many get by with jam sandwiches, Soreen malt loaf or dried fruit. Graham Obree used marzipan as it was moist and soft, rather than dry and crumbly.

Some folk consume energy drinks which are sweet and sugary, whereas others can get by on just water. If you struggle to eat enough to keep going, energy drinks can help, even if diluted. Note that “electrolyte” drinks aren’t the same as “energy” drinks – they have fewer calories in them.

Most energy drinks already contain a blend of salts and minerals, but if it’s warm and you’re sweating a lot, you may be losing more salt than the drinks give back. Consider adding an electrolyte tablet to your water bottles to avoid cramp and headaches. Example products are High5 Zero, SiS GO and nuun electrolytes.

Wiggle has a good range of options and they deliver worldwide.

Eating and drinking “little and often” works best for me – keep topping up to avoid going too deep into your reserves.

Don’t try anything new on the day! You may get a goodie bag with a sponsor’s energy bar, hyper-gel or Max Caffeine power shot, but these may not sit well with you, especially if you’re working hard. Save them for another day.

Feed stops can be a bit of a pointy-elbow bun fight if you arrive with folk trying to make a time. These stations are mostly staffed by volunteers, so be nice! Bin any used wrappers you’ve kept in your pockets.

Don’t train every day. Rest is the time the body makes the adaptations in response to the training stress. That’s the time when you get fitter.

Don’t train right up to the day. Dial down the volume of training in the fortnight leading up to the event.

Get some good rest. Pack your kit, and eat a proper meal the night before, ideally avoiding alcohol. You’ll likely have an early start, so go to bed early too.

Make sure you know how to get to the start venue (note that parking is unlikely to be adjacent), and what the registration formalities are. Allow yourself plenty of time for these. The bigger events let you do this the day before, but smaller events generally do it on the day, and queues can arise.

You’ll still have to pin on your dossard and affix your bike number. Better to be ready half an hour early than stressing over missing your start time. Soak up the atmosphere!

There will be many faster riders than you. You don’t have to keep up with them. Make a pacing plan based on your training and the terrain of the route, and try to stick to it. Riding in a bunch uses much less energy, but don’t feel obliged to push harder than feels comfortable when it’s your turn on the front. Similarly, don’t worry  about getting dropped from a group – there’s probably another one behind that will be riding a little slower. Recover a little and try join one of those.

You signed up for this – you had your reasons! Keep those reasons in your head for times when the going gets tough. Thinking of all the work you’ve done to be at this point, rather than the effort ahead makes the task seem less daunting.

Enjoy the journey and may the wind be at your back. Good luck!

ABOUT NEIL
Neil Moss has ridden stacks of sportives, but his favourite is the Le Mans 24-Hour, which he's targeted twice as a solo rider. In 2015, he managed 320 miles or 514km. In 2017, he's aiming for 400 miles or 645km, or 154 laps of the famous Le Mans car racing circuit. You can talk sportives with Neil on Twitter @nemovelosolo. During his sportives he raises money for Macmillan Cancer Support and he has a JustGiving page.

Cheat sheet for medical certificates for sportives in France