Road rules for cycling in France

Here are the road rules for cycling in France, according to the French Highway Code, or 'code de la route'. 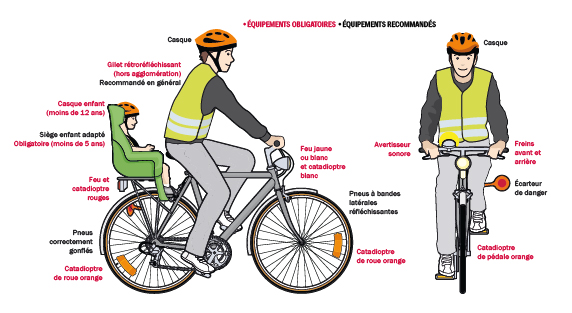 This official illustration from the Direction de la sécurité et de la circulation routières shows what equipment is obligatory under French road rules (in pink writing) and what is optional (in black).

DO YOU NEED TO WEAR A HELMET WHILE CYCLING IN FRANCE?
It is only obligatory for children aged under 12 to wear a helmet in France. This covers them if they are riding or if they are a passenger. There is a €90 on-the-spot fine. The official government guidance recommends a helmet for adults but this is not a legal requirement.

NOTE: It is illegal to ride a bike or drive a car while using headphones/earphones.

The Direction de la sécurité et de la circulation routières (DSCR) is the government body responsible for overseeing the implemenation of French road laws and the safety of French roads (see also here). It is also responsible for the 'code de la route', or the French equivalent of the UK's Highway Code.

The 'code de la route' includes a section on cycling and the responsibilities of cyclists using French roads. You can read the complete guidance here in French.

Note 1: These are the nationally accepted rules; there are some rules governing local roads that only apply in some jurisdictions – such as the 'turn right on red' rule that's in place in some areas of Paris, Bordeaux, Lyon and other cities.

Note 2: Some of these rules are more heavily enforced than others. For example, you will see below that only children younger than eight are allowed to cycle on the pavement. However, in reality, you will often see parents with older kids on pavements near busy roads. Similarly, I rarely see road riders or club cyclists with lights, bells or reflectors on racing bikes as per the official rules. (And in fact I don't have any of these on my bike and have never had any problems).

Here is a translation of the official 'code de la route' guidance for cyclists.

Roads are shared by motorists and cyclists, which means that there must be mutual respect between road users.

Cyclists, the same as drivers, must adhere to the highway code which guarantees the safety of oneself and all road users. To cycle in complete safety, all cyclists must have a well-equipped bike in good condition. Above all, cyclists must know and apply basic rules of road safety, in built up areas and in the countryside, during the day and at night.

A well-equipped bike in good condition contributes to your safety on the road as well as the safety of other road users.

-       Don’t transport a passenger, except on a fixed seat on a bike. If the passenger is less than 5 years old, this passenger seat should be equipped with foot-rests and straps.

-       At a junction, never position yourself at the side of a lorry or bus in their blind-spot. Make yourself seen.

-       The highway code applies to cyclists as it applies to all road users. Any violation or infringement can receive a fine.

-       In the case of rain, increase your safety distance and be careful when vehicles overtake you.

Many thanks to Helen at the Alpine French School, which has courses combining cycling and French, for helping out with the translation.