Planning a cycling holiday in France? You need to mark these dates in your diary so you don't get caught out by closed shops and fully booked accommodation. 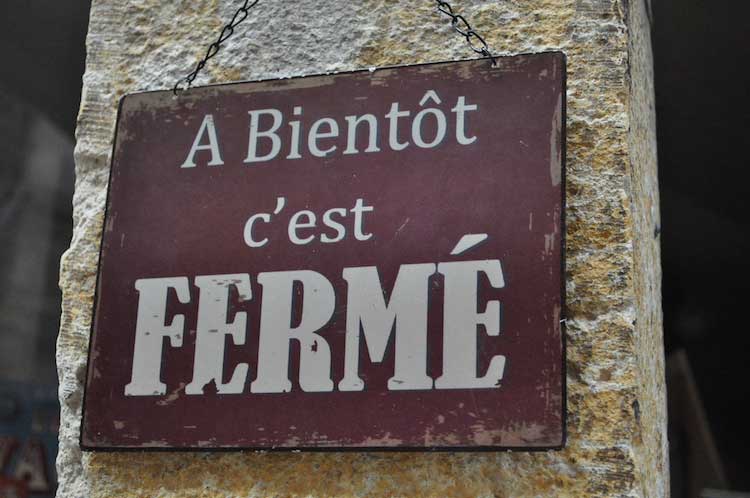 You want to avoid this happening to you ... Photo: Sylvain Naudin

Days off are something of a regular occurrence throughout spring and into summer in France, often turning regular weekends magically into long weekends and creating a holiday atmosphere where there really shouldn't be any.

Despite the country's secular separation of church and state, many public holidays are linked to religious holidays, which can be something of a mystery to non-Christians and atheists.

NOTE: If you are arriving into a new town on a public holiday or on a Sunday in France, it can be a good idea to check ahead with your B&B or hotel to make sure there is somewhere to eat locally, or if it's better to pick something up en route. Other oddities: some shops, small hotels and restaurants close on Mondays if they open on Sundays. Hotels, B&Bs and gites on our bike-friendly accommodation list will be able to advise what's available locally upon your arrival.

Here are the dates you need to know to help you stay on the straight and narrow.

These are important if you’re cycling in France because they mean accommodation and trains will be more heavily booked (and more expensive) and roads may be busier.

School holiday (vacances scolaires) dates vary across the regions. The official school holiday calendar can be checked on the Ministry of Education’s website – each 'zone' is broken down based on the nearest 'large' town or city.

Arriving unawares into a small village or even a larger town on a public holiday can result in a very hungry cyclist. Shops, boulangeries, restaurants, schools and all commerce (banks, post offices etc) usually close on official public holidays.

Some supermarkets may (if you’re lucky) be open, but often operating Sunday hours. Larger shops and supermarkets will usually have a sign up over the week and days before letting you know if they will be open, but – in general – expect everything to be closed and then be pleasantly surprised if it’s not.

Note that if a public holiday falls on a Thursday or Tuesday, many schools, restaurants and institutions will take the Friday/Monday off as well as a ‘pont’ – they ’faire le pont’, or make a bridge to the weekend, creating a long weekend.

Here are the dates you need to know:

January 1, New Year’s Day
January 1 is a national holiday. It's worth noting that many businesses will also close early on December 31 –don’t get caught out arriving late to a supermarket or boulangerie on New Year’s Eve to find it closed.

Easter Monday
2023: April 10
2024: April 1
2025: April 21
Easter Monday is marked with a public holiday across the country, but Good Friday is generally NOT a public holiday anywhere other than in Alsace, which remains aligned to the German system following World War 2. Easter Sunday is much like a regular Sunday in France.

May 1, Fête du Travail (Labour Day)
You’ll see Lily of the valley flowers being sold all over France, and these are given to friends and family as tokens of appreciation and kindness. Always a public holiday (no school and shops are generally shut).

Ascension Day
2023: Thursday, May 18
2024: Thursday, May 9
2025: Thursday, May 29
A public holiday marking when Christians believe Jesus rose to Heaven after his crucifixion and resurrection. It changes every year and depends on the dates for Easter. Ascension Day is 40 days after Easter Sunday. People often 'take the pont' by taking the Friday off as well to 'bridge' to the weekend and make a long weekend.

May 8, VE Day (Victory in Europe Day)
This marks the end of World War 2 in Europe. Commemorative services are held in most towns and villages across the country, along with parades in larger towns and cities. Always a public holiday (no school and shops are generally shut but some may open a half day or 'Sunday hours'). Towns and villages will have remembrance services – always moving events to witness.

Pentecost Sunday (or Whit Sunday)
A public holiday marking when Christians believe the Holy Spirit descended onto Jesus’ disciples. It’s held on the seventh Sunday after Easter. The Sunday is called Whit Sunday and the following day is Whit Monday.

Whit Monday
As above – the Monday after Whit Sunday is a public holiday in France.

Bastille Day, July 14
La Fête Nationale marks the storming of the Bastille in 1789 and the Fête de la Fédération one year later. Expect fireworks and parades all over France, and one super party for the Tour de France stage that day. Always a public holiday (no school and shops are generally shut).

Assumption Day, August 15
A public holiday marking the day Christians believe Mary, the mother of Jesus, went to Heaven. Always a public holiday (no school and shops are generally shut but some may open a half day or 'Sunday hours').

November 1, All Saints’ Day
‘La Toussaint’ remembers Christian martyrs and saints who don’t have their own saint’s day. Family and friends often visit the graves of loved ones on All Saints’ Day. Always a public holiday (no school and shops are generally shut but some may open a half day or 'Sunday hours').

November 11, Armistice Day
Marks the end of World War 1. Always a public holiday (no school and shops are generally shut but some may open a half day or 'Sunday hours'). Towns and villages will have remembrance services – always moving events to witness.

December 24, Christmas Eve
Not an official holiday but many families have their main Christmas dinner on Christmas Eve, so some businesses will close early.

December 25, Christmas Day
Assume everything will be closed.

December 31, not a public holiday but many businesses will also close early on December 31 – don’t get caught out arriving late to a supermarket or boulangerie on New Year’s Eve to find it closed.

See here for more on planning your cycling holiday in France