Which panniers are best for cycle touring? Bob Zeller weighs into the debate with these considerations to help you choose the perfect panniers for your trip. 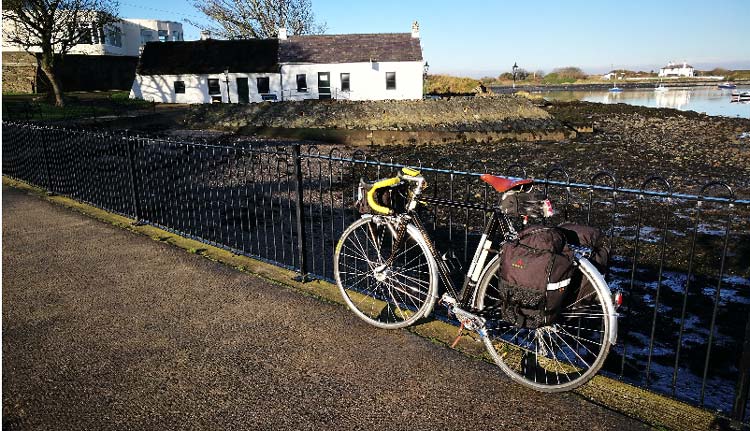 If you want to start an argument among touring cyclists, just ask them which panniers are the best. Actually, we can give you a few differing opinions right away. Lyn Eyb, who runs this website, swears by Ortlieb (you can read her review here).

Richard Peace, another of our reviewers, says Axiom, with its Typhoon panniers, are credible challengers. His Axiom pannier review is here.

And just to be difficult, I've been touring extensively since 2007 with panniers by Arkel – the Canadian cycle luggage makers. I started using their panniers after being impressed with a bar bag I've bought two years earlier. Arkel have been making first class products since 1988 – and with great success. More on their full range here 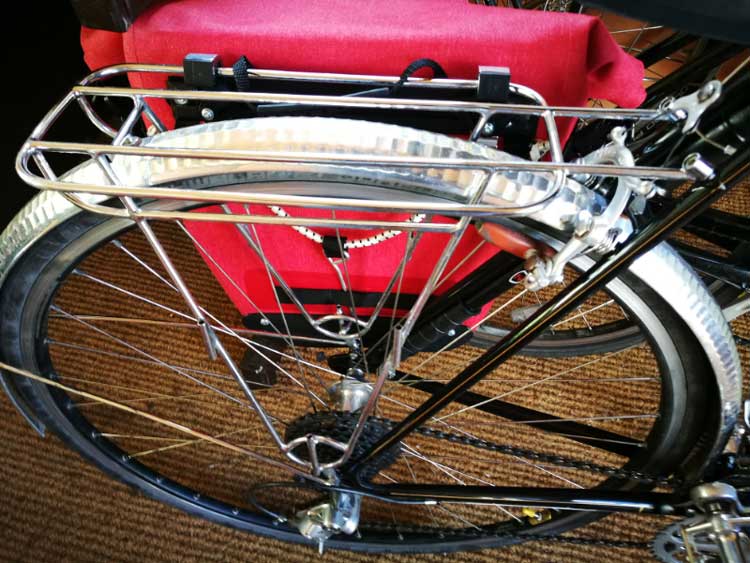 However, as with so many aspects of cycle touring, the question of what’s best is very much subjective. I tour quite a bit in France with Jim Burke, a friend from Canada who has a handlebar bag made by Cannondale in the US, and panniers produced by Mountain Equipment Co-op, another Canadian company. His panniers are top loading, unlike mine, and the bar bag is fastened to the bike at the bottom using two bungy cords and a bit of hardware at the top. My panniers are front loading and the bar bag is attached by plugs on a custom-made frame. He swears his luggage is the best. He may be right, but I very much prefer mine. Chacun à son goût! 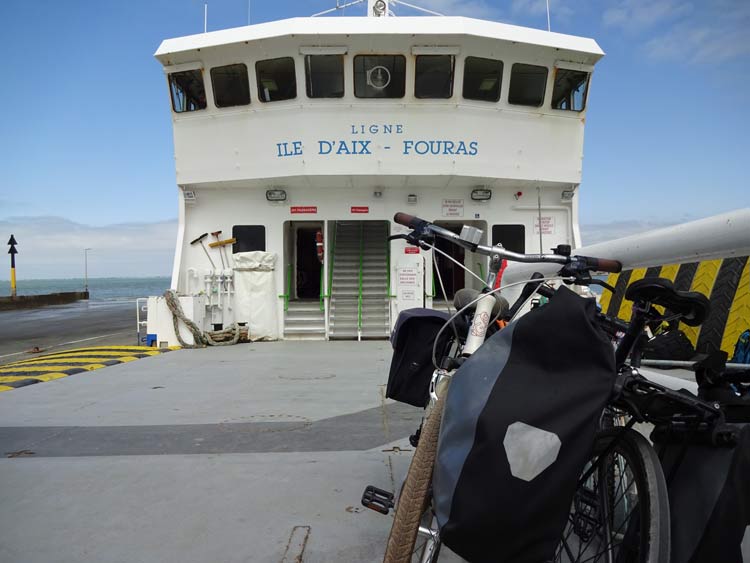 But to understand what would be best for you – not me nor Jim – you need to first consider perhaps the most fundamental question when it comes to pannier choices. That is, do you want your panniers to be waterproof or just water resistant? A stupid question, some might say. Obviously, waterproof. Who would want to put on wet clothes in the morning?

Not me, but there are good reasons why people disagree about this question, and there's no correct answer to the waterproof vs water resistant conundrum.

However there are good reasons why some of us prefer water resistant panniers.

First, let’s look at how manufacturers build a truly waterproof bag, one that meets strict international rules covering the use of the word ‘waterproof’. That might illustrate some of the questions facing pannier purchasers.

The best manufacturers start with coated fabrics that are fully waterproof. That’s a given, of course. But for a manufacturer to meet the regulations, it gets more complicated. Consider seams, for instance. Conventional sewn seams will leak because sewing leaves tiny holes, even in waterproof material. Arkel on its waterproof bags, and some of the other manufacturers as well, use RF (radio frequency) welded seams to ensure they are hole-free. In other cases, they use sewn seams that are then taped over. Both methods are expensive – RF even more that taping – but skilfully done, they ensure waterproofness for a reasonable length of time (although the RF welded bags usually remain waterproof for much longer).

But beware. Waterproofness presents its own problems – problems that won’t appear obvious at first. Consider for a moment what will happen should you need to pack wet clothes into a waterproof pannier (something that is always a possibility when touring). Those wet clothes will get the dry clothes packed with them wet as well, either from direct contact or by creating condensation inside the bag. In fact, you don’t even have to pack wet clothes to introduce moisture into a waterproof pannier – some weather conditions can do it for you. And, of course, because the bags are fully waterproof, there's no way for moisture to escape. That’s why folk often find it necessary to pack the bag’s contents inside smaller dry bags, or plastic garbage bags.

Yet another waterproof pannier complication means that because manufacturers are restricted to using welded and taped seams, conveniences like side pockets and internal compartments are difficult to attach. Thus waterproof panniers are usually not much more than a bag with a big hole at the top to put things in. That’s not a problem if you are OK accepting limited access as a trade off to ensure waterproofness. 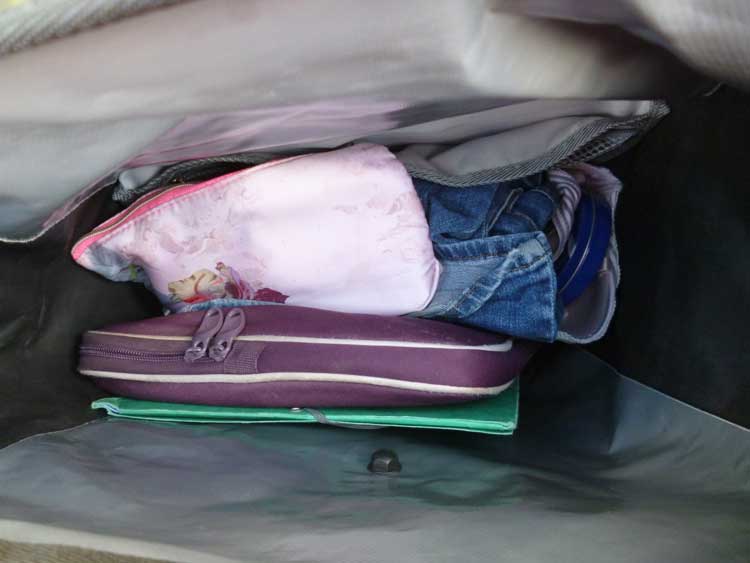 The bottomless pit of an Ortlieb pannier's single sack design isn't such a problem on short trips when you only have a few items in the bag, but things tend to get disappear into the abyss and get 'lost' when the panniers are packed to the brim on longer trips.

But if a waterproof pannier has so many restrictions, and if it isn’t really going to be waterproof at least some of the time, why deny yourself the advantages of a bag with convenient openings and additional pockets?

For me, having panniers that allows me to reach anywhere inside the bag through a zippered front, and not have to dig down blindly from the top to the bottom, is a real bonus. It’s Sod’s law that whatever you need will be right at the bottom. And if you have a top-loading bag, getting to the bottom to find a jumper often means you’ll add even more wrinkles to the new shirt you’re planning to wear to that posh restaurant as a treat for all the miles you've been getting in.

What's more, I find exterior pockets even more liberating. And because they are simple for manufacturers to attach due to not being restricted by waterproofing rules, water resistant panniers can have pockets on the top and on the side as well. Anywhere, in fact.

I keep a first aid kit in the zippered pocket on the top of one of my panniers and tools in the other. They’re out of the way, but the contents are instantly reachable. Importantly, if I need something, I’m not shoving a greasy hand deep into a bag filled with clean clothes. My panniers also have large mesh pockets on the outside – a perfect place for my rain jacket – or a baguette.

Nevertheless, there are many who would disagree with my views about the advantages of water resistant bags and, in fact, so popular are they that some manufacturers make only waterproof bags.

Ortlieb’s touring range is entirely waterproof and so is Axiom’s. For them, there is no debate. But Arkel are less convinced about providing a single option. Thus they make both, although one of the designers told me that while they probably sell more waterproof bags than water resistant bags, the more experienced a touring cyclist is, the more likely he or she will buy water resistant.

Their design department has managed to use elements of both systems in just about all of their touring bags. Consider Arkel’s waterproof Orca panniers. They don’t have lots of pockets and compartments, but they do have a zippered side pocket that has small holes at the bottom allowing moisture to drain. And inside there is a hanging organiser to keep small items in one place.

Should you opt for water resistant bags like mine but worry about things getting wet in the rain, you can buy waterproof covers to slip over the bags. Interestingly, if you ask those who use the waterproof covers about their efficiency, many will say they are not really needed that often for waterproofing but they do a wonderful job of keeping the panniers clean. It's a lot easier to wash covers than panniers. 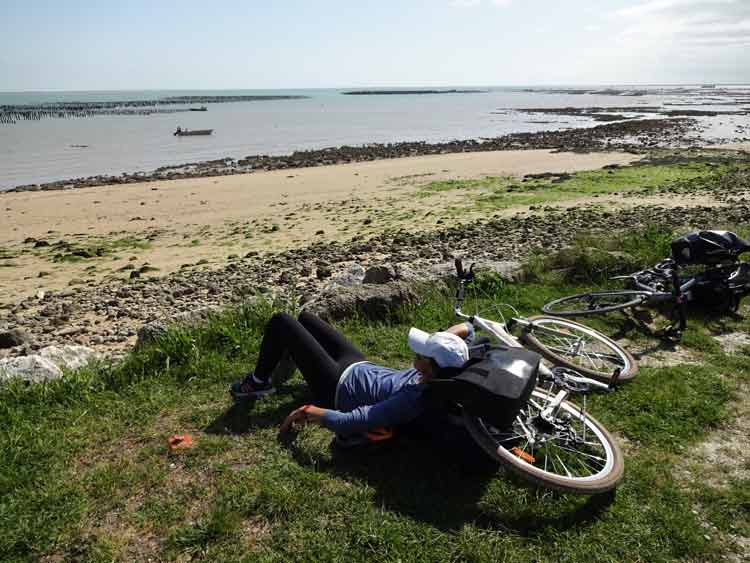 The importance of a pannier that doubles as a pillow should never be underestimated. Photo: Freewheeling France

But once you decide whether you would be better served by a water resistant or waterproof pannier, you have yet another question you must think about before you buy: How you attach the bags to your bike is just as important as the type of bag.

Just about all panniers will sit nicely on a bike in a bike shop when it isn’t moving. It’s how they handle the bumps and thumps when you are on the road that’s important.

With some attaching systems, drop a wheel into a large pothole and a bag will fall off – and perhaps even get caught between your mud guard and a wheel. Arkel uses what they call a Cam-Lock to fasten the bag to the carrier. It is a system using two cams fixed to an aluminium bar at the top of the bag and an aluminium hook at the end of a bungee cord at the bottom.  The cams (which can be adjusted for the optimum positioning on the carrier) are opened and closed by pulling and releasing on a strap which is, in fact, a handle for lifting and carrying the bag. The bungee cord, which is length adjustable, insures sufficient tension to securely hold the bottom of the bag to the carrier but still keep it easy to put on or taken off. With the bar being aluminium it is both very light and strong. Ortlieb uses a similar system, though they use plastic, not aluminium for their mounting rails.

Other pannier makers use locks, hooks or cams at the top but instead of bungee cord for the bottom, they have a flange, or ‘anchoring hooks’, as Ortlieb describes them, which hold the pannier flush to the carrier. Some systems work better than others and some are less prone to failure than others. And while some are more sturdy than others, some can be easier to to use.

But even if the mounting system is great and the bags handle the rain well on your first trip, other problems with wear and tear can emerge.

I once dropped one of my T28s between a train and the platform and a train ran over it. It escaped with a broken buckle and a large scuff on the side (Arkel replaced the buckle and I now brag about the scuff).

Many bags lose their waterproofness or water resistance because they develop rips or a buckle has broken. The degree to which that happens is usually dependant on the quality of materials used and the manufacturing process. Even if the quality of the material is high, construction must be equally high. And for most of us, that’s hard to judge. This is where reputation becomes really important. Ask around (you can join te Freewheeling France Facebook group to chat to other cyclists), read websites and – most importantly – check the warranty.

Decisions about panniers are always going to be difficult, but making the right call can save you time and energy on tour. It can also save you worrying about precious items getting wet or ruined. Get it right and your biggest challenge will cresting the top of that next hill – not trying to work out how to repair a broken pannier fastener.

More pannier reviews on our site