Maps for cycling in France

Here is an overview of IGN and Michelin maps for cycling in France – and how to choose the best one for your cycling holiday. By Richard Peace. 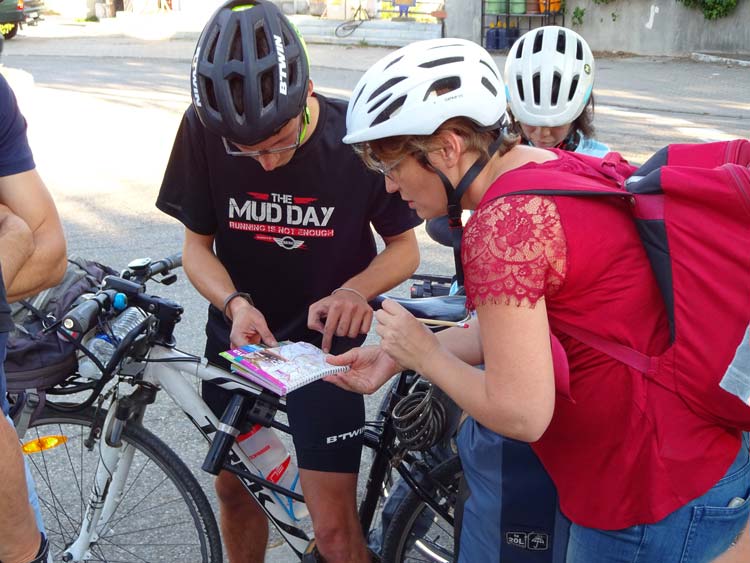 Lost on the Via Rhona: Fortunately, this man had lucked out, meeting Elodie – one of the cycling experts at the Vaucluse tourist board – en route.

See here for cycling with a GPS in France

Maps and guidebooks in English

Maps and guidebooks in other languages

For many people cycling in France today, navigation and mapping means following maps on a smartphone or GPS device. But paper cycling maps still have their place. You can’t have the pleasure of spreading out a map on your electronic device as you can with paper. There’s nothing like sipping your favourite tipple in a pavement cafe and using a paper map to ponder the nicest route to take. Another plus is that paper cycling maps don’t run out of batteries, or lose a signal at the most inconvenient of times.

However it's not a case of the ‘either/or’, rather that both options have pros and cons. Often it comes down to personal preference and many people of course use a combination of both paper and digital.

So here is our guide to getting the best out of French road maps – and where to find them in paper format or online.

These are the two main map brands battling it out for supremacy on the shelves of bookstores and tabacs (corner stores) across France.

IGN (its full title being Institut National de l’Information Géographique et Forestière) is the French equivalent of the UK’s Ordnance Survey, so it has the benefit of tremendous resources and authority.

Michelin is also a long-established household name in France due to its instant association with the tyre manufacture. It also has comprehensive coverage of French road maps at a range of scales.

Small scale maps show much more territory than equivalent-sized large-scale maps. In other words they are more suited to long distance touring. 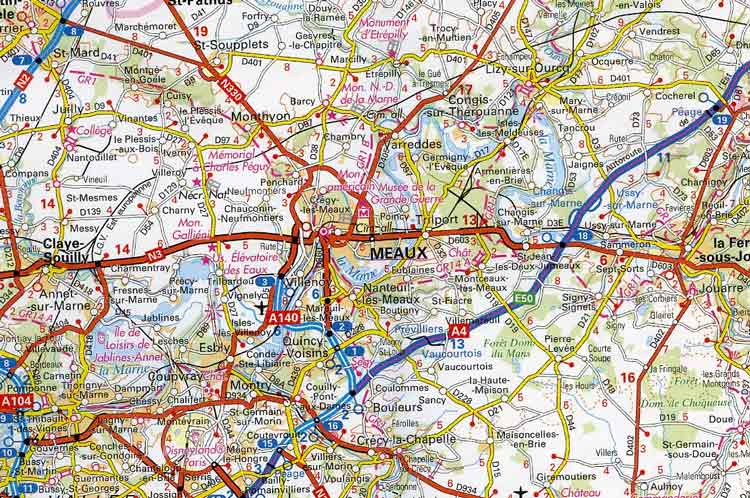 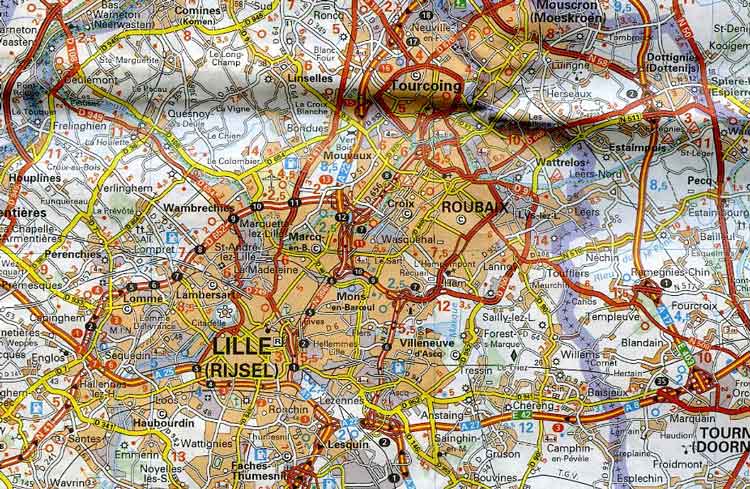 The IGN Top 200 have a pink-backed ‘Régionale’ series (subtitled Routière et Touristique), while Michelin 200 have an orange-backed Regional series.

Around a decade ago I did a large tour over several weeks from Paris to France’s south coast and back again relying solely on Michelin's Regional style mapping and managed quite happily (though GPS would no doubt have helped in the odd place where I got confused, but I always eventually got back on the right track).

They showed an excellent level of detail with traffic-free cycle paths and also a good network of minor roads. So if you want to stick to established roads and cycle tracks on a road bike or a hybrid bike and cover large distances, Michelin's Regional mapping is an excellent choice (though if you want to get down to the level of mountain biking on the smallest of tracks that is another matter).

The IGN Régionaleseries maps show a similar level of detail and very usefully highlight points of interest along the way and also show contour lines. Unfortunately they don’t show cycle paths as Michelin Regional maps do, despite having a more detailed scale, so they don’t really compete with Michelin as far as cyclists are concerned, nor do they show steep gradients. Note that IGN’s Top 200 series is simply an enlargement of the 250k enlargement and with addition of shading.

The next extra level of detail is IGN Top 100 (at 1:100,000 as the name suggests, now with a greeny-yellow cover replacing the old blue ones) and the Michelin Local series 150 series at 1:150,000 in brighter yellow. Here the scales tip much more towards IGN. The IGN scale is of course inherently more detailed, but you also get contour detail which you don’t on the Michelin maps and more track detail, which can be useful if you are venturing off-road. I’ve found several useful tracks using IGN Top 100 maps which have either helped me avoid busy roads or just been useful shortcuts. My only real gripe is that they still don’t show gradient arrows! 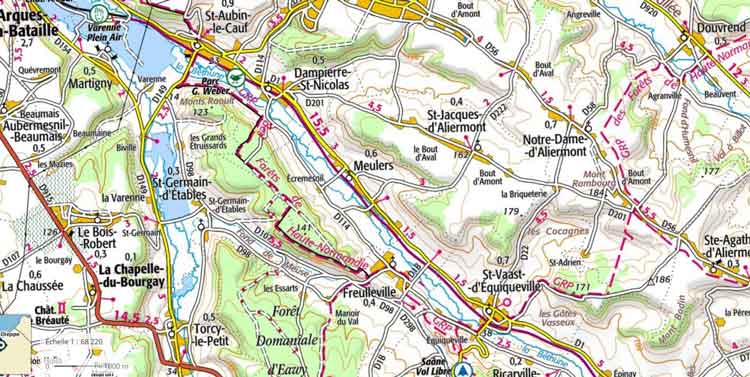 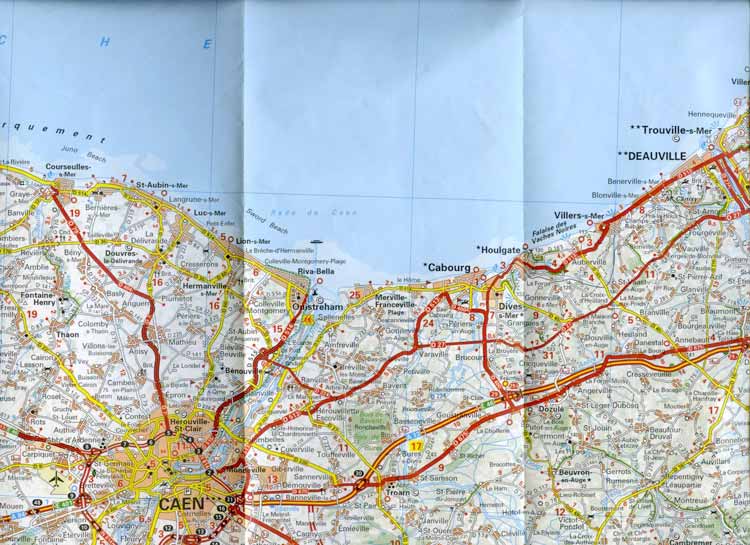 So the real choice seems to be between Michelin’s Regional series at 1:200,000 and IGN’s Top 100 series. It comes down to whether you want to take extra maps and whether you need the extra level of detail. The longer the distance, the more the disadvantage of IGN Top 100s. If you want to travel from France’s northernmost point to its southernmost you will need 12 IGN Top 100s but only 5 Michelin Regional maps. On the other hand you could complete a nice regional tour with only one or two Top 100s, so you might was well have the extra detail.

If you are heading for a popular tourist area, IGN also produce the Top 75 series which concentrates on the most visited outdoor areas of France. They are a direct enlargement of of the IGN 100 maps but with the detail easier to see.

For a good French language summary of the IGN scales available see here.

They are also in the process of being updated and the letter coding system and nomencalture will tell what you actually get with each maps (they may also be called Serie Bleue).

With literally hundreds of maps covering the whole of France at this scale it’s not surprising they seem to be in a constant process of updating, so check out the date of publication on any map you buy in this series.

These would be ideal for a ‘fixed base’ leisurely holiday, where you want to explore all the nooks and crannies of a very small area using local tracks and the most minor of roads. The level of detail goes right down to campsites and picnic areas so they would be absolutely ideal for a slow-going cycle camping trip where you take your time to pedal around an area and get to know it intimately. Also great for walks with contours down to 5m intervals. There is little cycle-specific info but on the updated maps voies vertes and pistes cyclables appear to be labelled as such.

For major urban areas IGN also produce the Une Ville et ses Environs series at 1:80,000 with larger scale areas at 1:30,000 and 1:13,000, but as far as I can ascertain (I don’t have one of these in my library) they are likely to be of limited use as they don’t usually show cycle paths.

Map of all major cycle routes in France

One useful national map that does show signed routes is IGN’s ‘Greenways and Cycle Routes of France’. This 1:1,000,000 map is clearly no good for route navigation on the ground, as detail at this scale is virtually non-existent, but it is an excellent tool for route planning, especially if you want to link up national long distance véloroutes and local voies vertes. There's even a wall map.

It’s worth noting that with the exception of the 'Greenway and Cycle Routes of France', none of the above 'road' maps show ‘official’ signed long distance cycle routes such as the Avenue Verte London to Paris or the Velodyssee Atlantic Coast route. However, Freewheeling France has the GPX info required and there are also guidebooks to plenty of these routes that will provide mapping.

Some recommended long-distance guidebooks with maps: 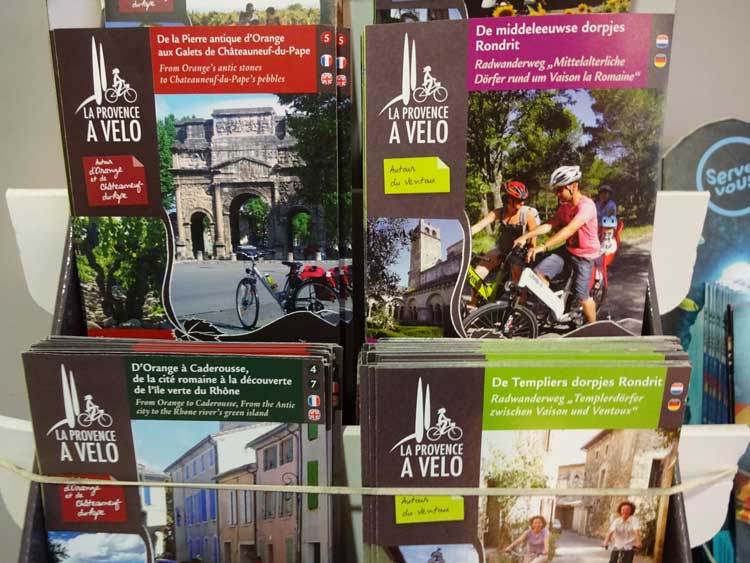 Some tourist boards provide excellent cycling maps. These ones in Provence are widely available locally in tourist offices, hotels and bike shops and cover a vast range of local marked bike routes over varying distances and terrains.

There are some excellent maps produced locally but these tend to come and go (presumably with the availability of funding) and you should enquire of local tourist authorities about these. Like many local maps they can also, frustratingly again, stop at the administrative border, even though there might be a major destination right next door many cyclists will be heading for.

Where to buy maps for cycling in France

One of the most impressive ranges for Englis-language maps is the Stanfords Travel Bookshop website (they deliver worldwide). They are an independent store and hold a good range of French mapping (alongside cycling guidebooks and general tourist guidebooks). You can find specific links below for each series:

You can also check out the CartoVelo site, which carries maps and guidebooks in French, as well as German and Dutch.

If you know which particular map and scale you want then there are a plethora of other online suppliers, including Amazon.

In France itself, buying maps is much less of a problem. You can often find a half decent range of maps at local supermarkets, tabacs (corner stores) and gift shops, though don’t expect them to include many options beyond the local area.

For purely digital purposes you can see IGN mapping at 100,000 and 25,000 scales as well as even smaller scales (scaled slightly differently on your browsing window) at the French government website Geoportail. It’s easiest with some French language skills, but it is possible to make your own notes on the mapping and – most crucially – your selected area and scale can be printed at home or saved as a PDF.

It’s worth noting that IGN has its own digital service for smartphones and small devices called IGN Rando and this also features selected bike routes that can be exported as GPX files. Walking and cycling routes are a bit random – certainly it doesn’t have comprehensive ‘official’ cycling routes available.

Memory Map and Viewranger are just a couple of examples of third party apps designed to work with smartphone GPS functionality that have become popular. For example my Viewranger-enabled smartphone allows me to use paid for IGN mapping with GPS location facility or free Openstreet cycle maps (the latter giving what I have found to be the most up to date system for seeing where cycle routes are in your immediate locality - too up to date sometimes as some routes indicated may be future routes, possibly passable but not yet official). My own ideal combination would be a detailed ‘overview’ paper map of the area such as the Michelin 200,000 scale already detailed plus one of these third party apps to give the best of both worlds.

So then, which map?

Ultimately which maps you ‘need’ or prefer depends on your style of riding and personal preference and simply how many maps you want to carry with you. Online debates will show there are all kinds of preferences and opinions out there, from digital minimalists to paper mapophiles. However, especially for long distance trips, paper maps still most definitely have a valuable role to play, so keep space in your panniers for at least one or two – if only as a backup.

About our contributor
Richard Peace is the author of the official English-language guidebook to the Veloscenie Paris-Mont-Saint Michel bike route and the Sustrans guide to the London-Paris Avenue Verte. He also contributes to A to B magazine, Bike Europe and Eurobike Show Daily.