You want to take a cycling holiday in France, but you're not sure your legs are quite up to it. Or maybe you'd just like a little help in the mountains. An electric bike might just be the answer, says Richard Peace, the co-author of Electric Bicycles: The Complete Guide. 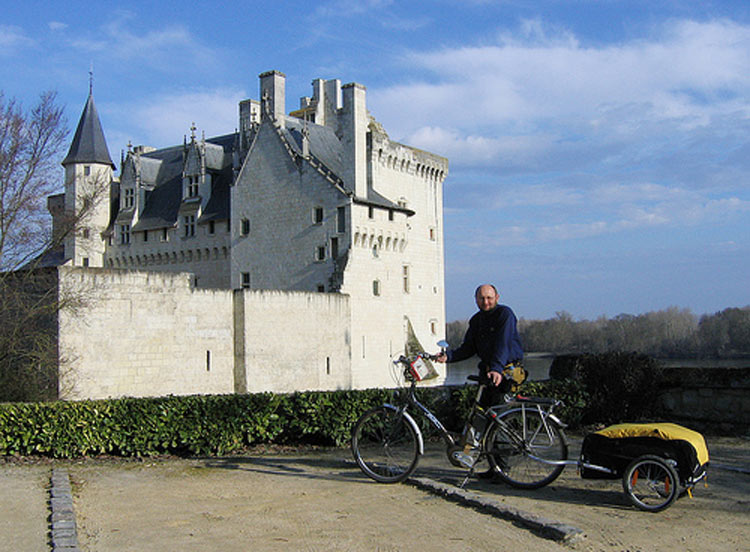 Electric bikes are great for pulling touring loads. This one is pictured at Montsoreau on the Loire. Photo: Richard Peace/Electric Bicycles

To the uninitiated, electric bike touring in France might sound like heaven (eating up hills with a full touring load) or hell (extra weight, you need to be near electricity and the likelihood of a disabling bike failure leaving you stranded in unfamiliar territory). As you might expect, the truth, depending on your requirements and your choice of electric bike, will probably fall somewhere between the two. But if you choose a model suited to you, your experience should fall nearer the heavenly end of the scale.

The French attitude to electric bikes

While Holland is without doubt the leading electric bike country in Europe (with the Germans not that far behind), electric bikes are increasingly catching on in France. They have been promoted at an official level by the Parisian government and leading French makes include Matra and Gitane.

On a personal level, I've never encountered any problem with being on an electric bike – I've been on French trains and the Eurostar, as well as ferries in much the same way I would with a normal bike. Be aware though, if flying to France (or anywhere else for that matter), you're unlikely to be allowed onto a plane with a large lithium-ion battery, whether it's in the hold or hand luggage, as carriage of the very reactive lithium is strictly regulated by the airline industry. 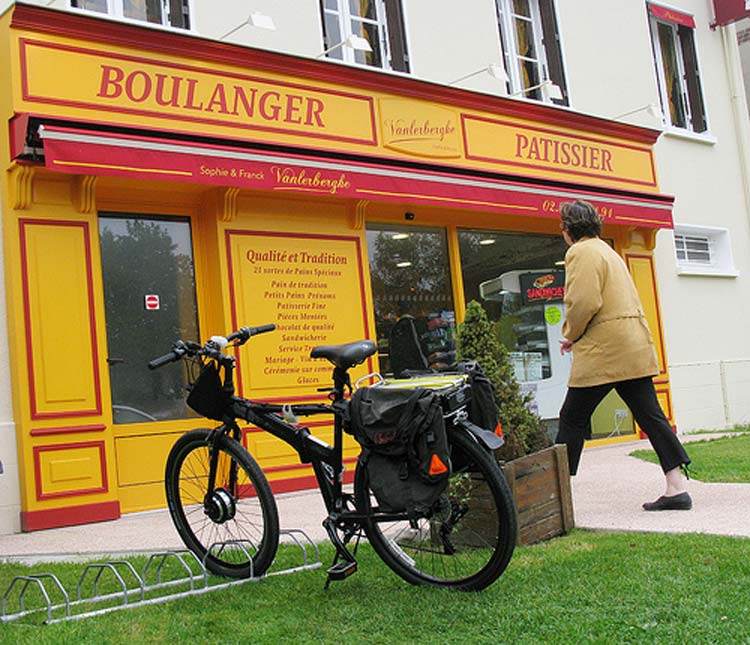 Do I really need one?

If you're entirely happy on a non-electric bike, then probably not. But if you've felt any of the following things about cycle touring, then an electric bike could help:

How practical are electric bikes for touring?

Electric bikes certainly won't break the bank in terms of electricity used – A to B magazine, specialists in electric bike tests, estimate running costs at 8-12p per mile as against 3-7p per mile for a conventional non-electric bike.

Getting stuck with a broken electric bike is an understandable worry and, for this reason, the better quality bikes are strongly recommended – see below. I've used Panasonic systems for several years and have never had a single problem, though the newer recommended makes may also prove just as reliable (it's just that they haven't been around as long).

What kinds of electric bike are there and which are best for cycle touring?

There are two basic kinds of electric bike:

• Pedelecs: turn the power on and pedal! Motor power is activated in response to your pedalling. Usually the amount of power depends on the pressure you put on the pedal – just the 'right' amount of pressure will give you optimum power. You will also get the option to deliver the percentage of power relative to your pedal power; 100% will match it and there is usually at least an 'eco' setting of around 50% and a 'turbo' of at least 130% (some systems like the longstanding and well-known BionX go up to 300% and are retro-fittable to existng bikes). 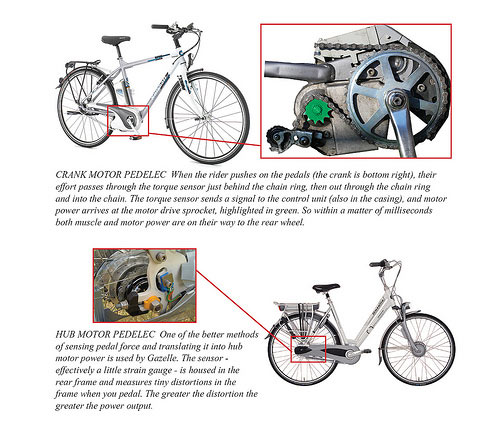 • E-bikes: power is activated by a control on the handlebars, in the vast majority of cases by a throttle grip, moped-style. It's a legal requirement that the pedals must be turning for the power to be delivered to the motor. 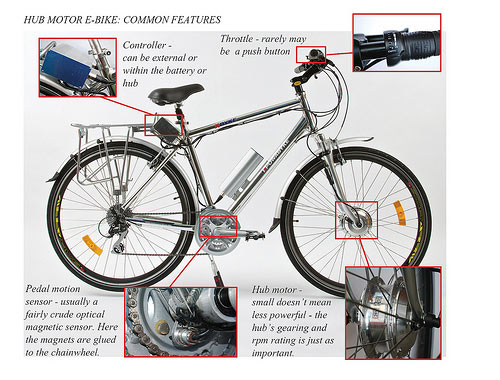 In both cases, pedelecs and E-bikes, you can switch the power off and ride the machine like a normal bike. There is usually a little extra resistance, but this depends on the bike, and often it is barely noticeable. The better quality electric bikes are usually easier to ride without power.

In terms of suitability for touring, top of the pile have to be high quality pedelecs featuring systems from either Panasonic, or Daum. The highly unusual and lightweight Gruber Assist system is also worth a tryout to see if you like the unusual way it drives directly onto the bottom bracket pedal axle. These high quality crank drive systems (i.e. they drive through the crank area, providing power at the optimum motor speed, whatever gear you are in) have the distinct advantage over those with motors in the hub whose efficiency is limited by the fact they are geared to operate best either at low speed on steep hills or at higher speeds on lesser gradients – but never both...

Some hub motor models are certainly worth considering as well. The Nano hub motor itself weighs only 2.3kg and even with a large capacity battery, you're looking at adding only around 5kg of weight. If you get high torque gearing on a Nano, it will help you pull away with your heavy touring load and climb steep hills, but will not power the bike at higher speeds, when power is in any case less needed. Several firms offer complete bikes or retrofit kits based on the Nano, but two of the best-known in the UK are Cytronex and Electric Wheel. Other well-known hub-motor systems include BionX and Sparta/Koga.

Brands featuring Panasonic motor systems include E-motion, Helkama, Kalkhoff, Monark and Raleigh. Cyclists with a weak pedalling action, perhaps due to ill health or age, should look for a bicycle or a kit with throttle control, the Cytronex being the outstanding example. 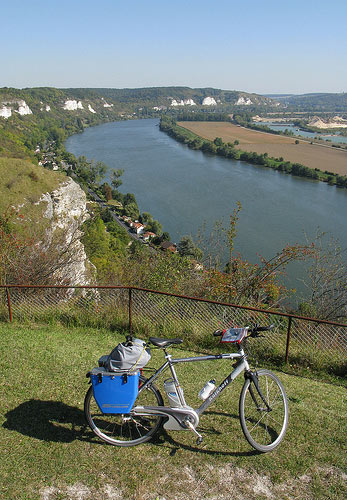 Panasonic pedelecs – in this case a Kalkhoff – are efficient touring machines. This one is taking on the cliffs of the River Seine. Photo: Richard Peace/Electric Bicycles

How far will a full battery charge take me and how much do electric bikes weigh?

Both questions are of obvious concern to tourers. They will be travelling further than in most other forms of cycling and without breaks for charging (charging at lunch times will depend on the goodwill of any cafe or restaurant you happen to stop at or, if picnicking, there probably won't be any potential charging point). Tourers also want to keep the weight they have have to carry to a minimum.

Lithium-ion battery technology has undergone a revolution, though you should always go for a recognised brand – well-known ones include Panasonic/Sony, A123 and Samsung – and try to get a two-year warranty on the battery itself, as reliability has been a particular issue with certain Li-ion batteries in the past.

These lithium battery caveats aside, today's larger electric bike batteries are increasingly hovering around 500Wh capacity, which should get you well over 40 miles on an efficient electric bike. Of course, you could also carry an extra battery, but this will set you back an extra few hundred pounds and will need charging (perhaps necessitating getting up in the middle of the night to swap batteries on the charger). Fitter riders who will cycle unaided a lot of the time might find the Gruber a useful if rather expensive system, as if you only use it for steep hills or headwinds you might find you are able to cycle all day on a single battery (it provides assistance of about half the level of many other electric bikes), and the Gruber is the best electric bike system to ride without power, a little considered facet of many systems.

The heaviest bikes suitable for touring weigh around 25kg and, as you would expect, as the kilos come off the cost goes up. The current cutting edge weight for electric bikes is around 12kg, so with touring additions of rack, mudguards and large capacity/spare battery systems from Cytronex or Gruber, a 16kg electric touring bike is within the reach of today's electric bike technology. 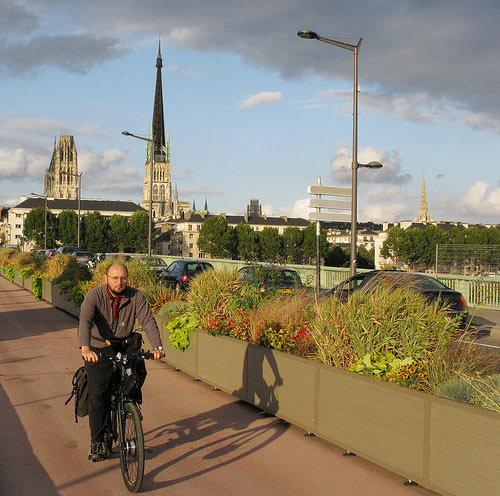 Hub motor bikes are good for stop-start town riding. This one is pictured in Rouen. Photo: Richard Peace/Electric Bicycles

How much would an electric bike suitable for touring cost me?

For out and out mountain bike touring, a high-torque Heinzmann motor is the stand-out option – this longstanding German manufacturer has a reputation for quality and durability second to none, though their retrofit kits are comparatively large and heavy, adding around 8kg to the weight of the bike.

Richard Peace is founder of Excellent Books, specialists in cycle publishing, and has been writing about electric bikes for the last decade. Richard, who has made several tours of France on electric bikes, is the co-author of Electric Bicycles: The Complete Guide and author of Cycling Southern France. He is a regular contributor to bikeradar.com and A to B magazine.

Information on a website for French, Dutch and German cycling guidebooks and maps.