France is home to some of the world's best downhill mountain biking – Amie Marsh has this overview of how to get involved. 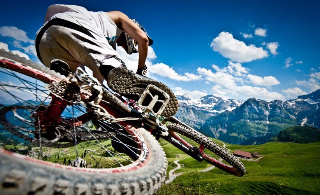 The French Alps are one of the best downhill MTB venues in the world. Apart from having steep, high and beautiful mountains, France has spent time and money on developing good chairlift-accessible MTB resorts (often ski resorts in winter), with a variety of high-quality, well-maintained trails. The fact that cycling in general is one of the biggest sports in France is also encouraging the growth of downhill.

Some of the world's best downhill racers are French: Fabien Barel has won the men's World Championship several times and five of the top 10 women (ranked no.1, 2, 3, 4 and 10) from the UCI 2010 results are French.

Getting fit for downhill MTB 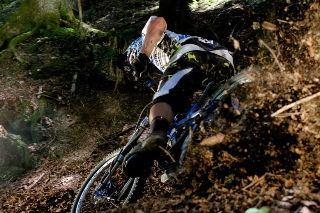 Being physically fit will help any sportsman, but cycling in general requires a specific type of fitness. Somebody who does a lot of running may be fit but still might find themselves quickly tired-out on a bike. Downhill requires a surprising amount of upper body strength due to the need to 'hang on' when going over the rough terrain; this is something that develops quickly when you're riding regularly.

Most downhill MTB areas have a variety of tracks that require different levels of fitness and ability. Starting on the easier trails and building up your fitness levels or riding the harder trails in the morning and the easier ones in the afternoon when you're a little tired is a great way to build up downhill fitness.

Riding the more difficult tracks – which often require more speed to clear jumps and drops – when you're tired can be a recipe for disaster: not going fast enough over a jump or not concentrating enough on a technical section can lead to a messy crash.

Most of France's main MTB resorts open from June to September: the snow has melted, the cows are grazing and it's officially summer. It's possible to ride year-round in areas of lower altitude, but these often require organised shuttle runs or a push up the mountain to the top.

Summer in the Alps is fantastic and the weather can be wonderful. There are many sunny days with temperatures in the late 20s or early 30s, and minimal wind. The downside to mountain weather is that it can turn quickly and you often get a mid-afternoon thunderstorm and periods of heavy rain. As a result, you should always take a set of lightweight waterproofs in your backpack. If it's thundering, chairlifts are normally closed and you can find yourself waiting in the rain for an hour or more for them to re-opens.

Having a spare tube, a pump and some tools is handy too as you'll often find yourself a long way from your base and having to push back with a flat tyre is no fun. 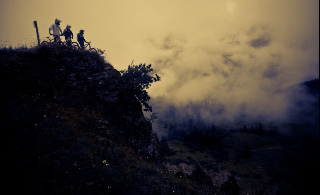 Les Portes Du Soleil is the main mountain bike hot spot in France. It's a group of resorts that are connected across France and Switzerland by 24 chairlifts. They have hundreds of miles of downhill and cross-country (XC) trails. The main areas are Morzine Avoriaz, Chatel (in French) and Les Gets.

The resorts have some excellent bike park facilities such as pump tracks, drop zones, north shore, jump parks and well-maintained downhill and 4X tracks. All of these resorts have trails for riders of all abilities, as well as for families.

There's a variety of terrain to ride. The Les Gets area is very green and gets extremely muddy when it rains. It has some exciting technical, rooty tracks as well as some fast tracks with lots of jumps and obstacles. Les Gets has previously been a UCI Downhill World Cup and World Championship venue.

Chatel is one of the best bike parks around, and is very well maintained. It's got a wonderful mix of steep, rocky, and rooty technical tracks, as well as some great fast jump tracks. Chatel hosts several regular big mountain freeride competitions, as well as a UCI IXS Cup race.

Avoriaz has some technical, rocky riding and is home to the French National Championship downhill course. It's also the link between France and Switzerland, where there are more amazing trails to explore.

Morzine tends to be the hub of the Portes Du Soleil due to its central location. It too has some downhill runs, the Pleney being the most notorious. Morzine also boasts some great single-track riding, as well as some hidden trails that are off the radar. The town itself has a wealth of facilities such as bike shops and coaching schools to help get you started.

More information on MTB in France

Two good places to start are Pink Bike and Ride Monkey, which both have general information and up-to-date news, shops, Q&A forums and product reviews. There are also some great MTB mags available, including Dirt, MBR and MBUK. These mags are great places to find MTB courses and specialist holiday companies.

See Amie's article on downhill MTB in Morzine, as well as our MTB blog.

Amie Marsh is the founder of Dirty Girls Ride, a Morzine-based MTB group for women.