Cycling with a GPS

If you're yet to make the jump to using a GPS for cycling, then Peter Quaife has this advice. 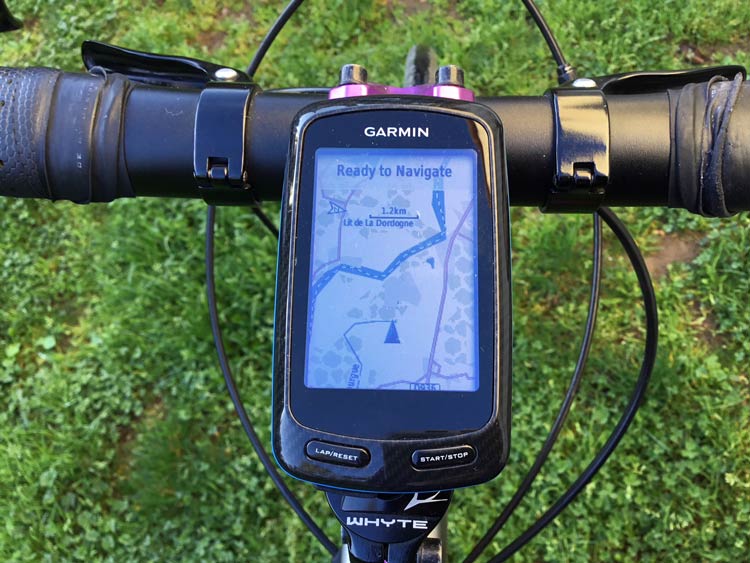 A bike ride is usually more about the journey than the destination, which throws up a raft of navigational issues to deal with. It means that the route needs to be enjoyable rather than efficient, concentrating on nice scenery with as little traffic as possible. Road signs aren’t much help because they’re usually aimed at car drivers who have entirely different priorities – follow them and you’ll end up on the busy roads you want to avoid.

The traditional solution to this is hours spent poring over maps, trying to figure out which are the nicest roads to ride. Usually the smallest, wiggliest roads are the best – the wiggles create interest, and are usually there because they follow attractive natural features like a stream or a hillside. Car drivers don’t like wiggles because they’re slow, which is yet another reason for cyclists to embrace them. Hills add another complication to the mix. If you want to minimise climbing, as many cyclists do, you’ll try to find valley roads, but often they’re busy, meaning a much more complex route on back roads is necessary.

Once you have your route, you then need to follow it. The problem is that if you’ve done a good job, it’ll be really complicated. Keeping to back roads means lots of junctions and probably a lack of useful signposting. You can stop to look at the map, but with frequent junctions, that gets annoying, and a long tour might mean lots of maps to carry. I used to write cryptic instructions on a slip of paper which I’d tape to my stem, but that was time-consuming and prone to mistakes (there’s an example from Audax rides here :).

These days there’s a very obvious solution to all of this: use a GPS. I’ve been using bike GPS units since the first primitive models came to market, and I was instantly hooked. Plotting a route was much quicker than writing my cryptic instructions, and on the road, navigational errors ceased almost completely.

Making a GPS map on a cycle computer

The basic method for this has remained unchanged since the first units appeared. You use some sort of mapping software to create the route, which you then download to the GPS. The GPS will then guide you around the route you’ve plotted.

So let’s start by looking at various mapping options. The most obvious ones to use are the free online services. I generally use ridewithgps, but you can also use Strava and others, including Googlemaps.

A ride tracked on ridewithgps.

Ridewithgps uses the crowdsourced bike-specific Open Street Maps which are pretty good, although you can find some roads are missing in more remote areas. The site includes a pretty good routing algorithm, which means you can put in as few as two points on your route, and it will create a bike-friendly route between the two points. You’ll need at least 4 points to plot a circular route. I always check the route manually because it does throw up some odd decisions from time to time and can send you up unnecessary climbs, but I’m impressed how well it does the job, especially as it’s free. Then you download the route you’ve created to your GPS and you’re good to go.

The other method is paid for mapping software. In the UK there are various options – I’ve used Tracklogs, which incorporates very high quality Ordnance mapping. For cycling in France I use Memorymap, which has IGN mapping (IGN is the French equivalent of the Ordance Survey).

I like both of these because the mapping on screen is much clearer than the online services, so it’s easier to figure out which is the best route. However they all have significant drawbacks (aside from having to pay!)

Firstly, they have no routing algorithm, so you have to do the whole thing manually. Secondly, if your GPS has mapping, it won’t be the same as the maps the software uses. This can make the GPS behave unpredictably. It’s always better to plot the route on the same mapping you’ll be using to follow them. These days I use Memorymap or Tracklogs to plan in general terms the route I want to follow, but I plot it in ridewithgps. However, if I was starting from scratch with a cycling GPS, I’m not sure I’d spend the money on mapping software. 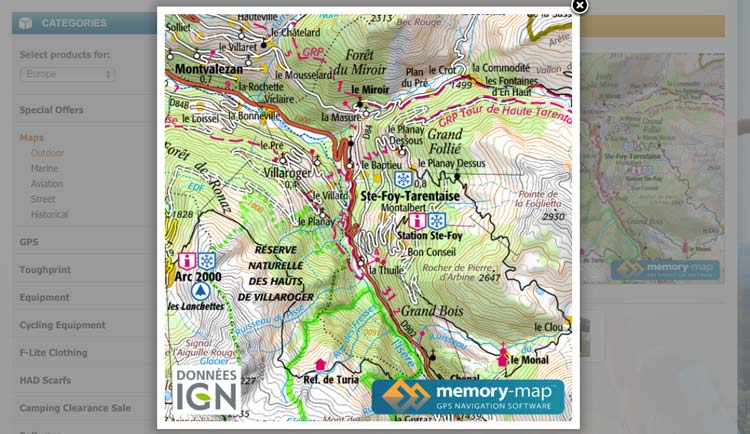 There are a couple of other ways of mapping and they are worth mentioning. One is to download other people’s routes, which you can do in ridewithgps or Strava, but I’m such a route geek I would never trust anyone else to plot a route as good as I’d do myself. The other method is to use Google Earth. This is difficult to use for plotting routes, but because it’s based on satellite photographs, it can work well for offroad routes or in places where mapping doesn’t exist or is poor quality.

It's worth noting that – in theory – you can plot a route on most mid-range GPS units without using a computer or downloading anything. However in practice it's close to impossible. That's because the screen is so small that it's not possible to plan anything because you can't see the big picture.

Following a cycling route on your GPS

Let’s turn now to the GPS units themselves. The first thing to understand is that they’re nowhere near as well developed as car GPS units. You can’t unpack the unit, attach it to your handlebars, tell it where you want to go and set off. That’s because bike GPS units are mostly used as training aids, not for navigation. They’re very good at recording ride data and hooking up with any other technology you might have, but routing is seen as a niche interest, with the result that they don’t do it so well.

They will all, however, competently follow a route you’ve figured out in advance, and that’s where they really shine. To get the very best out of your particular GPS it’s important to get the settings right, and it’s not at all obvious what those should be. Fortunately the GPS geeks over at ridewithgps have all manner of advice in their Help Centre, including the best set-up for all the popular models – all you need to do is follow their instructions.

The second thing to understand is that bike GPS units are limited by how they’re used. They need to be able to run all day without being charged, be small and light, work in the rain and be user-friendly if you're wearing gloves. This means that they don’t have the large, bright high-definition touch screens common on phones; they’re just too power hungry and water sensitive. This is a very sensible compromise, but it’s good to know why your bike GPS has a small, low definition screen.

You’ll probably need to upload maps to your GPS. Many come with basemaps which have so little detail that they’re useless for cyclists. There are various options for paid mapping depending on which areas you’re interested in, but these days I don’t think there’s any need to pay, just get open source bike-specific mapping from velomap. The other benefit to using velomap is that you can use exactly the same mapping on ridewithgps to plot your routes, which will make your GPS very happy. A word of warning about paying for Garmin maps: the licence agreement means that if you change GPS, you may not be able to load your maps onto the new unit – you may have to pay again, so it is often better to use free maps in the first place.

So which GPS should you buy? I can’t list all the units available, and of course as soon as I’ve finished writing it, it will be out of date. Before parting with your cash, I’d suggest looking at DC Rainmaker and ridewithgps to make sure you’re up to date.

What you should buy depends a lot on your budget. The most sophisticated GPS currently available (January 2018) is the Garmin Edge 1030. It combines complex training aids, social media integration and navigation. However it’s expensive, and if all you want to do is navigate, it's totally over the top. It’s also complicated, but if money’s no object and you love technology, this is probably the one for you.

At the other end of the scale is the Garmin Edge Touring, which is the one I recommend to touring cyclists. Its primary focus is navigation, which isn’t to say that it navigates better than Garmin’s other models (it doesn’t) but its simplicity makes it easier to use and cheaper to buy.

There are intermediate Garmin units in the Edge 800 series which include navigation and less performance data than the Edge 1030 – it’s up to you to decide where the best balance lies between cost and functionality. The smaller Garmin units are best avoided, because while some have navigational capacity, it’s not well developed and the screens aren’t big enough to show maps adequately, or in some cases at all. However if all you want to do is track your distance and time (without plotting or following routes) then they do the job.

Despite their problems, Garmin GPS units are probably still the best (you can see the full range here).

New kid on the block Wahoo is earning quite a following for their Elemnt, but the navigation isn’t quite there yet. I suspect when firmware upgrades deal with this, it’ll blow the Garmins out of the water, but we’ll have to wait a while longer. For now, their super-popular Elemnt Bolt is too small to display maps properly. For day-to-day use, Wahoo units are also increasingly dependent on being used in conjunction with an iPhone (rather than downloading completed rides to a computer), so this may not be for everyone.

You can buy GPS units from the usual cycling specialists stockists, such as Wiggle, Evans Cycles or Rutland Cycles. These online outlets also usually have good/reliable user reviews written by cyclists. In France, Decathlon stocks a basic range online. It's worth shopping around and comparing prices of different units (as a tip, I've always found Wiggle cheapest for touring units, plus they deliver worldwide free of charge).

I grumble about my GPS units from time to time because they could be better but, truth be told, they’ve transformed my riding. They make it really easy to explore exciting new routes in areas I’m unfamiliar with, which for me is one of the best things about cycling. If you haven't already got one, maybe now is the time!

About our contributor
Peter Quaife, together with his partner Natalie Lynch, runs St Antonin Noble Velo cycling holidays in the Aveyron Gorge area north of Toulouse in south-west France.

Find and download bike routes in France for your GPS