Guide to Cycle Camping in France

Cycling in France? Cheap accommodation in France can be found under canvas – Emma Philpott has this guide to cycle camping to get you started. 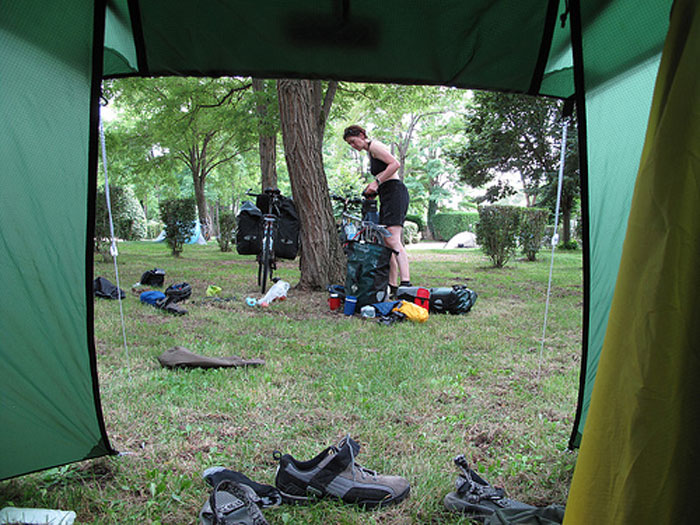 Unpacking at Saint-Satur in the Centre region of France after another day in the saddle. Saint-Satur is a medieval town near the river Loire. Photo: Richard Cross

I must confess that economics played a strong part in my conversion to camping while cycle touring – when I was planning my first trip by bike to France, it was budget restraints that made me consider taking the tent. But there were other benefits as well: with a small amount of additional equipment, I worried less about distance and destination, and my plans didn't have to be as reliant on finding accommodation on the route I wanted to follow. Most importantly, camping gave me the opportunity to extend my day outdoors into the late evening.

In France you'll find campgrounds strung out at convenient intervals for a cycle tourer, from basic municipal sites to facilities that often voast pools and restaurants. Across the south of France, my boyfriend and I paid €2-€10 per person per night at campsites, with our cheapest paid-for campsite behind a shop in picturesque Saint-Marsal in Languedoc-Roussillon. In more remote areas we often free-camped (or wild camped) in public picnic areas, above river banks and in herb filled-fields where we could discretely camp for free.

For a guide to what to take with you, see Emma's Basic Cycle Camping Kit, as well as our guides to choosing the right tent and buying camp stoves.

According to the French Federation of Camping and Caravanning, 6 million French and 2 million international tourists camp each year in France at more than 10,000 registered campsites.

French campgrounds follow a four-star rating system. At the lower end of the spectrum, a one-star campground provides basic amenities including toilets and showers (which may not be hot), while four-star campsites are often fully fledged holiday villages with bars, restaurants, entertainment and pools on site. There are some beautiful camping spots across the country. I've stayed at several family run sites complete with pet rabbits, a secure inner city campground with great views of Carcassonne, and a terraced site with stunning ocean views in Fécamp.

About one-third of campsites have a small grocery shop on site and most will have fresh bread delivered daily. Bars, pools and laundry facilities are common on bigger sites, and internet access may also be available if you need to plug in while you're away.

Campgrounds are usually packed in July and August, and prices usually rise to reflect this holiday season demand. If your trip falls into this time of year, try to book pitches ahead. In winter you'll have the opposite problem: you'll find many campsites closed between October and April, so do a little research if you're travelling off-season to make sure the site you're heading to will actually be open.

How to find a pitch

One of our favourite camping websites is Flower Campings – it's a network of independent campsites in great spots. Websites such as Camping France and the French Federation of Camping and Caravanning (in French) also allow you to search directories of campgrounds by region or theme. In printed form, Michelin's France camping guide and The Best Campsites in France by Alan Rogers have the most comprehensive listings and Cool Camping France provides an eclectic selection of smaller sites.

If you don't plan where you're going before leaving home, you can easily find information about campsites en route. Most maps of France will have campsite icons which are usually fairly accurate and roadside billboards often advertise nearby camping facilities. Tourist Information centres should be able to give you information about campsites in their area, while village shopkeepers are also often a useful source of information. If you're travelling with a GPS, you can download POI (Point of Interest) files showing campsites in France.

You may also be able to find a space to put your tent outside designated campsites, a practice commonly known as wild or free camping. If you plan to wild camp, be aware that it is technically against the law in France, although as long as you are discrete when you leave the road, you shouldn't have any problems.

Before you start looking for a place to wild camp, make sure you are stocked up on water and food. Walking tracks which lead off quiet roads, deserted picnic areas and old farm tracks can all be good places to pitch a tent. It's better not to enter any land with 'no trespassing' signs or cross into fenced off land, but if you spot a landowner near a spot where you'd like to camp, there's no harm in asking if you can stay.

No matter where you camp, make sure your bike is securely locked overnight, preferably to a solid object like a tree or a sturdy fence. If you're cycling in a group, locking all bikes together will deter most thieves but solo campers will need to think more creatively to ensure security. Travelling Two has an excellent article on bike security.

With extra weight on your bike you'll have to work a little harder to get up the hills and it might well take a little longer to get on the road each morning, but there are magic moments which make all that worthwhile. I've seen more sunsets in the past six months than the 20 years before, cooked with wild herbs from around my campsite, and washed off the day's sweat with open-air swims in secluded spots. It's hard to beat finding a perfect campsite after a day of cycling, and France has plenty of spots just waiting for your tent.

Emma Philpott is a world-curious New Zealander who packed up London life to cycle back to New Zealand in March 2010, boyfriend in tow. After spending winter in Istanbul, they cycled east during 2011 through Russia, Mongolia, China and South-East Asia. You can find out more about her adventures on her Rolling Tales blog.

Information on a website for French, Dutch and German cycling guidebooks and maps.