We take a look at one of the most popular and best value e-bike ‘kits’ out there from UK-based company Swytch. 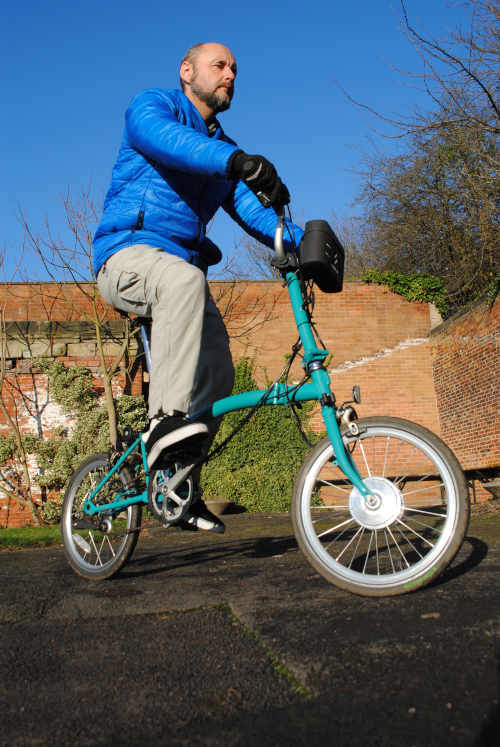 A review by electric bikes expert Richard Peace, who also contributes to electricbikereport.com

We have already explored why you might consider the idea of electric biking around France in general in this article but now let's consider one of the most popular and best value e-bike ‘kits’ out there – from UK-based company Swytch.

Why fit a kit?

There are now so many types of e-bike out there you might wonder why you should bother with all the palaver of fitting your own to your existing bike. Let's take a look...

1. You already have a bike you really like. Many riders have spent quite a bit of time and money finding and often customising a bike that is right for them. An off the peg e-bike inevitably won’t be the same. Fitting a suitable kit means you have all the advantages of electric assist but also still have that cherished bike that fits you like a glove. 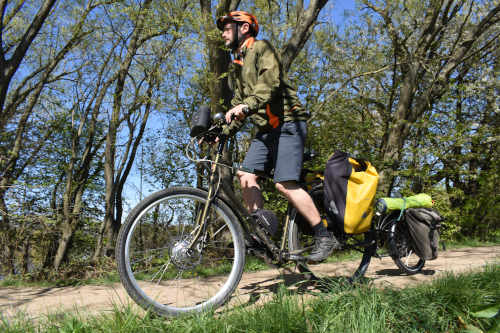 2. You might want to go back to a non-electric machine. Maybe you just need electric assist while you get fitter or recover from an operation, or just for an epically long or hilly tour. You just take the kit back off and you get your original non-electric bike back.

3. Money! Kits can be great value for money, especially if you already have a bike you like.

4. Weight. While recent years have seen more and more lightweight e-bikes (there is finally a decent choice of models under 17kg or so, which I would class as light for e-bike), if you want a truly lightweight e-bike you're going to be talking serious money and really light e-bikes under 14kg are still very hard to come by. If you already have a light bike (or even if you don’t and choose judiciously on the second-hand market), then kits are a more affordable way to get a reasonably light e-bike. With the right bike and kit you can have a really light e-bike. The lightest kits such as the Swytch come on at 3kg+ (the weight of a big e-bike battery alone…).

In a nutshell, Swytch claims to be one of the easiest to fit and lowest priced kits out there and one that should fit just any bike except those that feature thru axles on the front wheel.

The theory is that it’s just a matter of swapping out the front wheel (Swytch provide a hub motor ready fitted into common wheel sizes) then changing over tyre and tube from the old wheel, adding the battery mount to the handlebars with what is essentially a large black plastic clamp and fitting a rotating ring of magnets onto the pedal axle plus an electric sensor to the frame to pick up rotation. 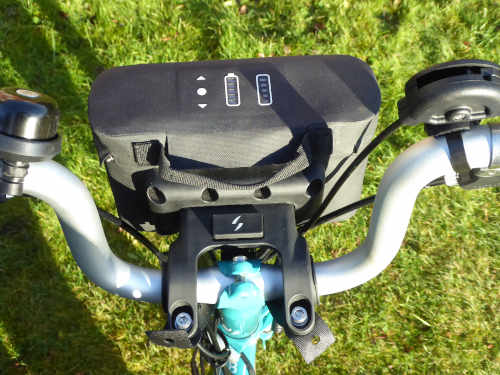 I know from the experience of fitting a number of e-bike kits over the years that it’s never as simple as you would like to think. There are so many different sizes and shapes of components on bikes to take account of that designing a quasi-universal fit kit – which is what Swytch claim to have done – is in fact fiendishly complicated. Despite all that, I was pretty impressed with the fitting process as you will see below.

I have tried both the Brompton-specific Swytch version (with a narrower motor to fit Brompton’s narrower front forks) and the ‘Eco’ 180Wh battery, and the very latest iteration with a larger ‘Pro’ 250Wh battery and a universal pedal movement sensor fitted to a trekking bike. 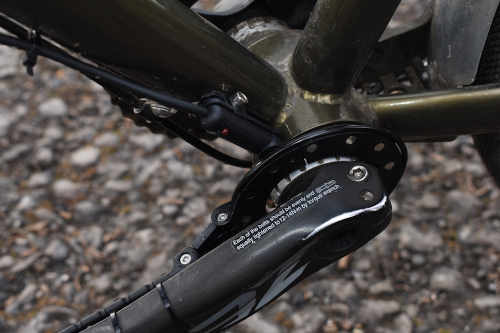 Both fittings went pretty smoothly with just one or two niggly points that took a bit longer to solve than I expected.

With the Brompton kit, be aware the rims are Swytch’s own and not Brompton’s so you may need to do a little experimenting with which ETRTO 349 size tyres fit most easily – as I did. Otherwise it proved perfectly straightforward as you would hope with a kit designed for a specific model of bike.

With the trekking bike fitting (fitted to a modified Tout Terrain Amber Road), I found that I couldn’t swap the disc brake rotor off the original wheel across to the Swytch hub, which is compatible with bolt on rotors only and not centre lock ones. No big deal really; 10 minutes on Ebay and I had ordered a compatible rotor quite cheaply. 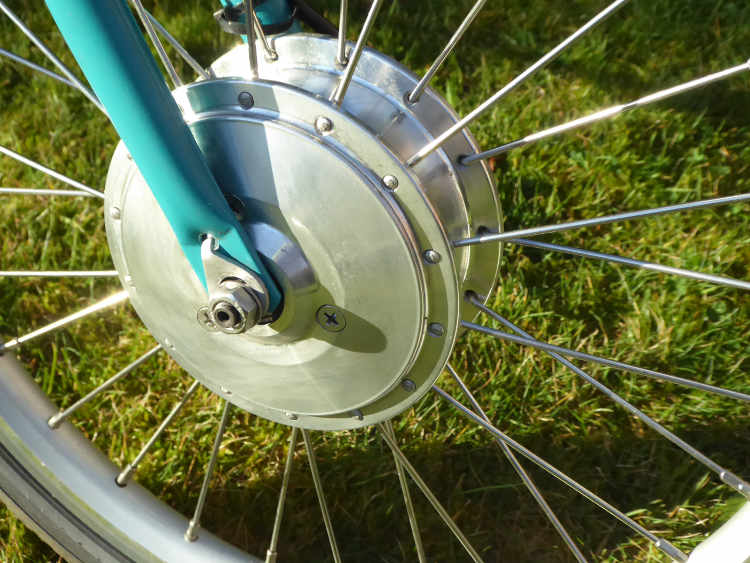 Otherwise, fitting was straightforward, even if the magnet disc and frame sensor took a little longer to fit and line up than I estimated; only really to be expected as this is the area that will vary in measurement most from bike to bike. Swytch have therefore done a good job coming up with a design that will fit almost any bike, even one like the Tout Terrain that has oversize, external bearings on the pedal axle in the shape of the Shimano Hollowtech II design. The only real issue came when I had to move the pedal axle back in the frame housing (a so-called eccentric bottom bracket design) that took the magnets out of line with sensor. Half an hour’s fiddling with rubber and cable ties though and I had reattached the sensor in a suitable position.

If any or all of the above sounds like something you don’t fancy, rest assured it should all prove a piece of cake for any half decent bike mechanic, whether DIY or professional.

Once fitted, the Brompton kit added some 3.4kg to the weight of the B75 budget machine. This gave a total 14.81kg e-bike weight, composed of removable battery of 1.78kg and a very manageable ‘carrying weight’ of 13.03kg for the rest of the bike.

The bigger 'batteried' Pro version of the kit with new pedal sensor added 4.45kg to the weight of the Tout Terrain trekking bike. Note this is the effective weight the kit added to the bike calculated by weighing the bike before and after the kit was added, not the actual weight of all kit components – weight may be gained or lost by the difference in weight of the new rim, spokes and, where applicable, disc brake rotor, so the same kit may add slightly different amounts to different bikes. Before fitting, the bike weighed 15.65kg and after fitting 20.1kg, giving an overall gain of 4.45kg. The removable battery weighed 2.1kg and is included in these figures. 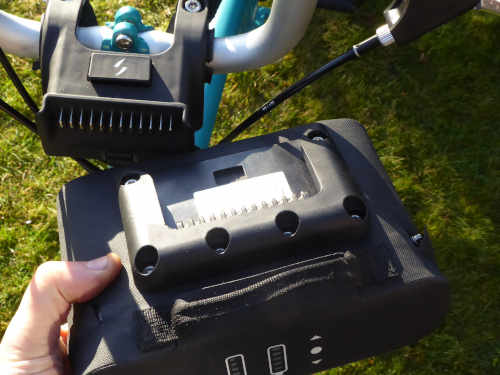 You can select one of five power levels from the buttons on the battery top; naturally I used lower power levels for modest hills and higher ones for steep hills, reserving the top couple of levels for much steeper off road climbs.

Unless you opt for a mid drive e-bike (more expensive and heavier) or a much bigger hub motor you won’t get more effective power than this. It is smoothly delivered too, telling you that the pedal movement sensing components and control electronics are doing their job well. It’s not like the more expensive torque sensing systems where the greater the pressure you put on the pedals the greater the power output of the motor, which I find the most ‘bike like’ and the most effective for steep climbs and hill starts – but as movement sensing systems go, it’s right up there with the best I’ve tried.

Another nice feature was how nice it was to pedal with the power turned off – great if you find yourself on an easy route section and want to save some battery or just get a bit more exercise.

The top of the removable battery pack also has an integral battery capacity meter. I found it pretty useful but only as an approximation of charge level left; on my 26.4-mile range test ride for the bigger 250Wh battery on the trekking bike, lights went out at around 5.5 miles, 11 miles, 13 miles and 17 miles and the 5th light never actually went out – power just stopped being delivered shortly after the 26-mile mark. This was a pretty hilly test course with plenty of trail sections so this is an impressive performance.

The battery-top buttons also let you control the built in light on the front; a nice touch though note it is a highly visible safety light only and will not illuminate unlit roads for which extra lights are needed (the battery pack has small strap attachment points on top for fitting extra lights).

There is also a walk assist feature that was useful when negotiating inclines that need you to dismount and push the bike up, such as very narrow trail access ramps.

The Swytch offers considerable advantages. It is light, powerful (for a hub motor design) and looks well made. Even on my very non-standard Tout Terrain it wasn’t too tricky to fit – on most bikes it should be much more straightforward.

Being long established should inspire confidence that Swytch will be around for a while longer to offer support and backup. That said, it’s a bit disappointing it only comes with a one-year guarantee in the UK (it's 2 years in the EU). Two years are now fairly common, especially on the batteries, the most expensive ‘consumable’ on an e-bike by some way.

US readers note there is also a US spec 20mph assisted model with a twist and go throttle (independently operating throttles are not allowed on e-bikes under UK or EU law where the max legal assisted speed is a lower 15.5mph).

There are some downsides with Swytch as there are with every kit on the market; the main one I found to be the need to remove your hands from handlebars to change power levels; a big inconvenience while riding and requiring care. A handlebar control for power level changing without removing your hands from the grips would be a huge benefit.

A concern before fitting the kit was how the extra weight of the battery on the handlebars would affect the stable and predictable handling of the bike. However, the extra of the battery pack on the bars wasn’t really noticeable whilst riding on either test bike – the effect was felt more when off the bike as it tends to quickly swivel the bars to one side, so some care was needed when leaving it propped up.

Despite these quibbles, overall, I would unhesitatingly say it is a great retrofit option.