Brittany's Green Ways by GH Randall is the definitive guidebook for cycling Brittany's voies vertes and veloroutes. Richard Peace has this review of the second edition of the book. 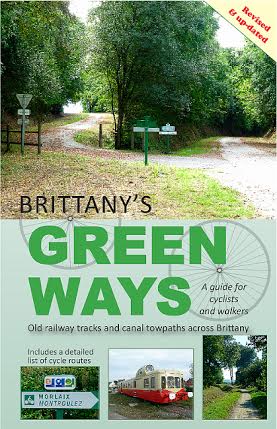 The first edition of this guidebook – complete with maps – was incredibly popular with both cyclists and walkers. Originally in black and white, the new, updated full ­colour edition looks a totally different and much better book, whilst retaining the core, very detailed content covering Brittany's favourite leisure rides.

Whilst the region's best known traffic­-free trail, the Nantes-­Brest Canal, is the subject of an entirely separate book from Red Dog, there is a huge amount to whet the cyclists' appetites aside from that.

Brittany's greenway network has developed over many years and benefits from a coherent plan to bring back to life many of the disused railways and old canals that once bought much needed employment to one of France's far­flung backwaters.

Eventually the railway provided an 18-hour Brest­-Paris service at a time when the equivalent road trip could take 3 days. Smaller rural lines reached into almost every corner of the region and ran to over 470km at their peak. The railway's subsequent decline bequethed the current greenway network of several hundred kilometres which runs along many old rail trackbeds. In addition to the railway legacy, the canal towpaths have contributed the Nantes-­Brest (see above) and Ile-­et­-Rance (Rennes­-Redon) routes, amongst others.

Brittany's 'core' green ways are allotted 'V' numbers (though the V prefix also applies to major veloroutes that use largely D and C roads such as La Littorale) and this book covers sections currently either signed and officially promoted, or what the author calls 'practicable'. They are as follows: 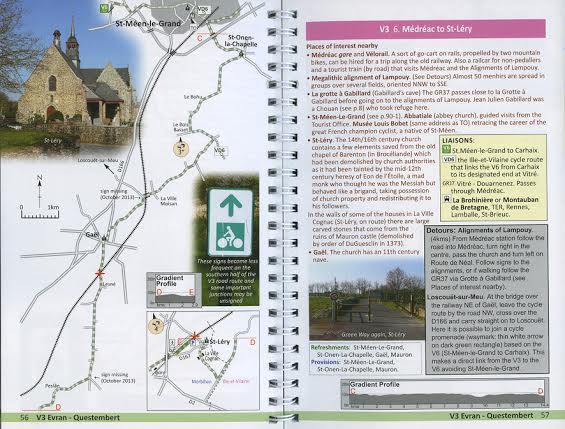 The mapping (mainly at a scale of around 1:55,000 by my rough calculations) is clear and crisp, and alongside is all the supporting information you might need, from local attractions to accommodation (cross referenced to full contact details in the gazeteer section in the rear of the book), with signage details and any tricky navigational stretches also flagged up.

Described much more briefly, but in sufficient detail for you to seek out further information either on the web or locally, are signed véloroutes (mainly on minor roads but with smaller off­road links too) and local secondary green ways and veloroutes. One véloroute example given in the book, La Littorale, holds the tantalising promise of a ride around Brittany's whole coastline (it's currently about half complete).

Whilst the book has gone from black and white to very attractively printed colour and been entirely updated, the handy spiral­binding and the recommended retail price of £11.50 remain the same.

Together with Red Dog's guide to the The Nantes-Brest Canal, you have the complete kit for exploring all of Brittany's main green ways; an enticing prospect.