Book review: The End of the Road – The Festina Affair and the Tour that Almost Wrecked Cycling

Julia Stagg journeys back to the Festina Affair with a copy of The End of the Road by Alasdair Fotheringham.

Review: The End of the Road – The Festina Affair and the Tour that Almost Wrecked Cycling
by Alasdair Fotheringham (Bloomsbury) 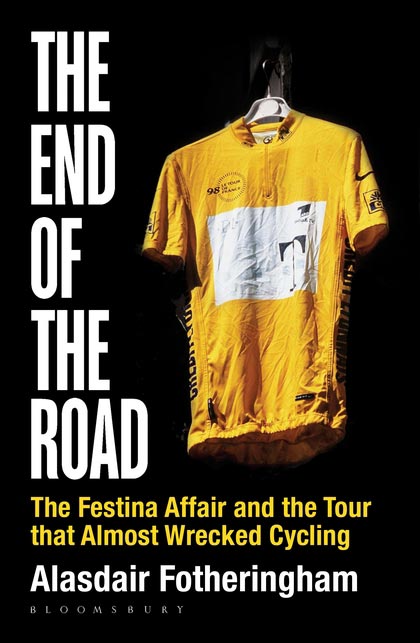 The Festina Affair. Three words that conjure up images of cyclists, bikeless, heads bowed, being led from hotels to waiting police cars. (And that ridiculous blond hair of Richard Virenque!) It was an episode in cycling that few will forget, yet post-Armstrong, this doping scandal seems almost amateur. The participants so naive. Perhaps that is why the culprits are viewed with affection by many, even today. However, the repercussions of this shady episode were severe enough to bring the sport to its knees. In The End of the Road, Alasdair Fotheringham sets out to give a detailed account of the 1998 Tour de France and the aftermath of the events that shaped that race.

The book opens with the prologue in Ireland where Rolf Aldag’s experience of the Tour as a domestique in the Telekom team begins with flushing drugs down his hotel toilet. It’s an interesting start. It should lead to an interesting read. Unfortunately, I really struggled to complete it.

The style is ponderous. The prose convoluted at times. The author over relies on outside sources, leading one to question what is new in this book. And somehow, amongst all of this, the drama is lost. Yet the subject matter remains fascinating, so I persevered, picking up odd nuggets of detail about the cyclists I remember well. But it wasn’t an easy read. Which is disappointing as the events of that dramatic year – the arrests, the scandal, the strikes, and not forgetting some amazing victories – deserve a better chronicle.

(Feargal McKay across at Podium Cafe has a more in-depth account of everything that is wrong with this book).

ABOUT OUR REVIEWER
Julia Stagg writes fiction set in the Ariège region of the French Pyrenees, an area she discovered through her passion for cycling. Her latest novel, Last Chance in the Pyrenees, is available now, published by Hodder and Stoughton. You can join her on Twitter and Facebook.