We take a step back in time to an age when getting something from Amazon probably meant a relative was visiting South America. Bob Zeller reviews an old cycle touring classic. 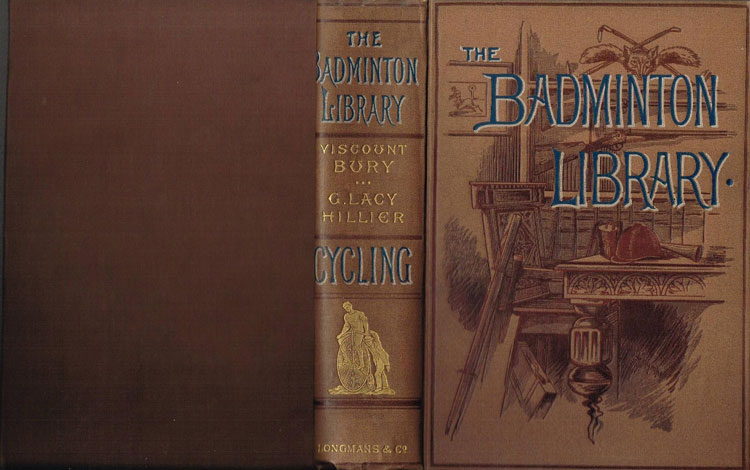 We have lots more reviews here!

One has only to read the many reviews of cycling books in Freewheeling France to realise that there is some pretty good reading to be had. And helpful as well. Richard Peace, and his co-author Andrew Stevenson, have done a cracker of a job suggesting routes and destinations for cyclists planning a tour in northern France – as I know well because I have been using their book Cycling Northern France quite extensively as I plot my next tour in that cycling heaven. Somehow, Richard manages to get lots more than facts into his books. Read about a route and you’ll be champing at the bit to actually ride it, so interesting does he make it.

But most cycling books today are rather pedantic – and boring, if I might add. To me, cycling is an art, not a science. And yet, in so many ways today’s books are often more like a dull instruction manual than they are books of the joy and poetry of touring. They try to convince you that there is a holy grail of things you must do, equipment to buy – and worst of all, clothes that you must wear when cycling. It’s all about being part of the tribe, I suppose. Nowhere do they encourage you to relax, enjoy the scenery and experience where you are in a way that can only be done when riding a bike.

Well, there is an antidote to all that rubbish: The Badminton Library of Sports and Pastimes Cycling Book published by Longmans & Co and edited by the Duke of Beaufort. This wonderful book with its exceptional wood cuts prints and whimsical pen and ink sketches is chock-a-block with sage advice, much of which is still relevant today but offered in a tone that is light, gentle, non-demanding and always reassuring. My copy was an anniversary gift from the missus. And what a gift.

When it was first published in 1887, cycling was growing so quickly that by the time my copy was published in 1896, it was already in its fifth edition. Who needs electronic publishing to stay up to date?

Every time I take it down from the shelf to read a few pages, I find passages of real interest. And, as well, constant reminders that while we think that today’s frames, components and paraphernalia are the state of the art, very much of what cyclists used in those days was not a whole lot different from today. Plus ça change, plus c'est la même chose.

Just one example: in the seventies, when I started touring, the very best clothing for cyclists was made from Merino wool. If you could afford it, you wore it. Today there is a return to Merino, at least at the top end of the price range. “It’s the latest, and just what you need”, shout the adverts. Yet in the Badminton book of the 1890s, what did the authors quietly recommend for cycling clothes? Merino wool. Plus ça change ...

Well, of course not everything of the early days is best practice for today. And even then, there was a lot of misinformation. Nevertheless, the book’s purpose was to help newcomers to the sport work their way through all the choices that were available even then – and there were plenty. Some better than others.

At that time, of course, many bikes were made to order by a neighbourhood bike shop. And many of these had their own, and sometimes radical, ideas as to what was best for the client. But evolution came quickly and sensibly, and by the time my edition of the Badminton book was published there was good, sound engineering and design, all representing the best thinking of the time. The book traces many of these, advising readers what to look for and what to avoid depending on their type of cycling; what’s best for purpose – it’s good, solid advice.

“Training and discipline are important,” it says, “if the rider is to get the best out of whatever it is he is doing and whatever type of bike he is riding.”

As an ex-sports journalist, I especially like the comment that “the successful cyclists, as well as the runner and jockey, must think as well as act. It is only when when sound judgement co-exists with suitable physical powers that excellence in any branch of athletics is obtained.” I was once going to write a book about just that, but never did. It’s just as well because the Badminton book uses one sentence to say what years later I would have needed a book to say.

When it comes to touring, the book not only advises about fitness, but about combining fitness levels with route planning. “A large number of beginners fancy they can ride with ease from sixty to a hundred miles daily for a week at a stretch, and on this basis they arrange their tours, with the result that they either break down utterly and are compelled to take the train home, or else they spend a miserable ‘holiday’, riding hard against time during the whole of the trip, thus converting what should have been a pleasant outing into a period of hard labour.”

The book goes on to suggest that the cyclist should do forty to fifty miles daily “at the outside and with generally a spare day in the middle ... as well, thus letting himself off as lightly as possible with a view to a more complete enjoyment of the tour as a whole.”

The practicalities of touring are considered as well. A good idea for touring cyclists, it says, is a garment called a “Combination”. Best described as similar to what Canadians call long winter underwear, the Combination is the answer apparently to many touring cyclists’ complications due having to ride wearing wet clothes. “A medium thickness Combination will roll up into a very small compass, and when put on it completely clothes the body from neck to ankles in dry woollen attire over which damp woollen things may be put on again without danger.” Not so different as many of us do today, at least for our upper body, when we wear Merino baselayers, I suppose.

The clothing chapter ends with advice that for the most part is equally logical for today. “The final maxims are: (1) wear nothing but pure woollen garments; (2) have them cut by a practical cycling tailor; (3)  study the even distribution of warmth; do not over-clothe the body; and (5) in the event of a longish ride, always take a dry under vest in case of accidents. By following out the above precepts, the cyclist, lady or gentleman, will be enabled to ride in comfort and safety, whatever may be the state of the weather, throughout the year.”

Throughout the book, women cyclists are not just acknowledged but actively encouraged, something that not all cyclists of those times did, often believing that cycling was dangerous women’s health. But the book puts paid to that and the needs of women cyclists are treated with every bit the same respect and value as men’s. To make the point even clearer, in the chapter focusing on female cyclists, the book discusses how the cycling evolution quite quickly began to acknowledge the ever growing band of women who rode bikes. “... by 1878 there were rumours of a lady cyclist who had accompanied her husband in an extensive tour; and despite some public consternation and criticism, women were here and there, all over the country, beginning to take more and more furtive rides on the machines of their male friends and relations. [And] once they had tried the sport, the taste for it seized them with full force; and it is a remarkable testimony to the charms and advantages of cycling that they made themselves recognised by women, through all the terrible drawbacks (suitable sized cycle and clothing were two of these) with which feminine cycling was handicapped in its initial stages.”

Bob Zeller, a now-retired UK-based Canadian journalist, spent much of his professional life covering major European and North American professional cycle racing for the (Toronto) Globe & Mail, Canadian Broadcasting Corporation, Winning Magazine and others. His beat included the the spring and autumn Classics, the Tour de France and world championships. While he has enjoyed just about all types of cycling – sportives, audax and just riding his bike to the shops – it's touring that he has always loved the most. And it's touring in France that he enjoys the most.