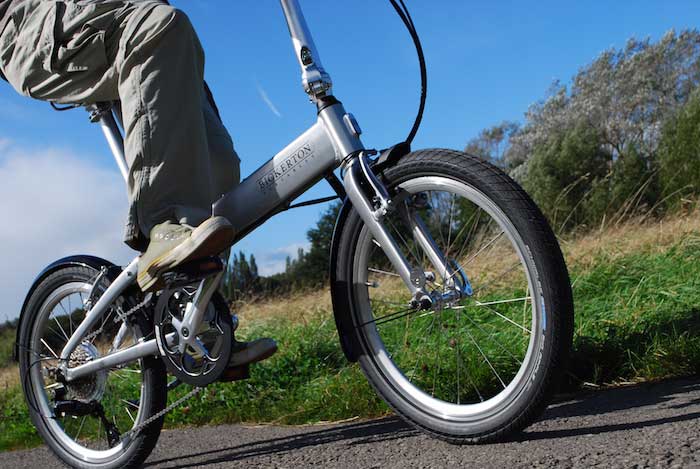 Tern are producers of high quality bikes (mainly based around 20" wheels, which all models here feature) and Bickerton is a sister brand, and older readers may remember the original Bickerton folders.

All three test models use similar folding mechanisms: a mid-frame hinge with the handlebars folding down the outside of the folded frame and the seatpost slipping down inside the frame.

If you've been put off the whole idea of riding folders from experience of a few years ago, don't be; Tern in particular have gone through a process of simplifying the folding experience and strengthening the hinges so that all the bikes featured here are very easy to fold with a little practice. They also ride very well, with stiff handlebar and frame hinges helping transmit your pedal strokes into speed and large volume but fast tyres helping reduce the 'small-wheeled wobble' effect (which most riders get completely used and don't notice anyway).

Perhaps best of all for people wanting to ride in France, the three models featured here fall within the Eurostar hand luggage limit and can easily be taken on-board without the hassle of booking bike spaces (they just need a bike cover like the one pictured below for the Tern Verge Tour model). 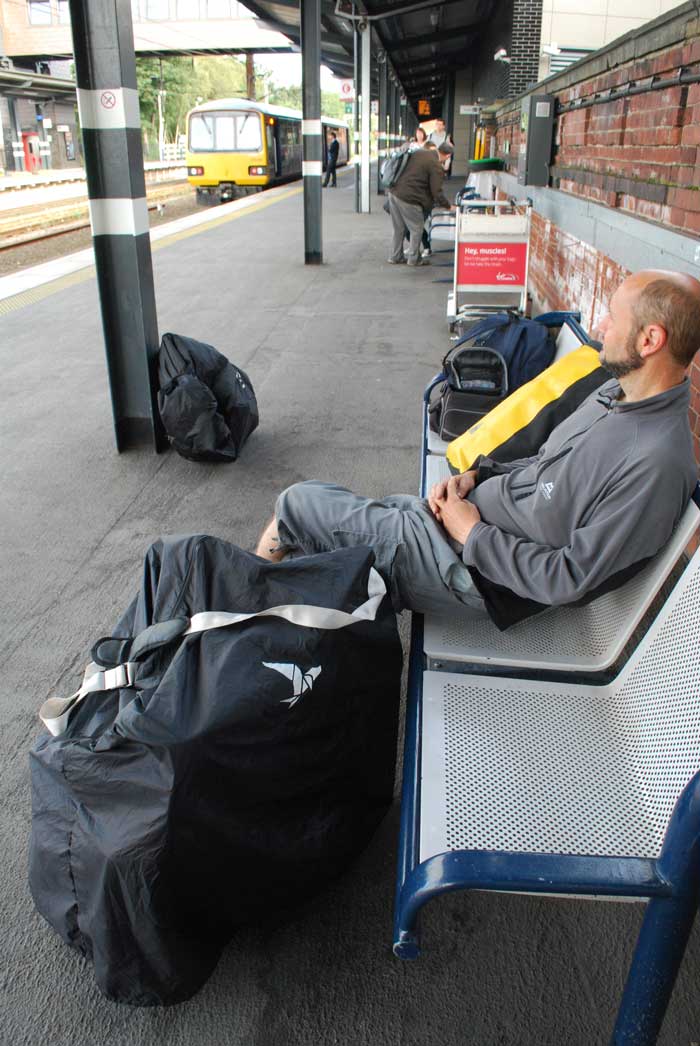 I did have a couple of quibbles with the fold: the magnets could be a little stronger to help stop the bikes unfolding should you knock them while carrying them uncovered, and the handlebar quick release needs undoing before folding and the bars carefully rotating so they fit flush against the wheel once folded. Despite these minor cavils, all three bikes are eminently practical, be you a world tourer or a city slicker, or should you want some sophisticated electric assistance.

Prices for all three folders are certainly in the right ball park; the Bickerton is in the same price bracket as many 6-speed Bromptons, while the Tern Verge Tour and the Vektron don't really have any competitors in terms of quality and functionality (a 6 speed Brompton with rear rack, mudguards and lighting is £200-300 less and lighter than the Verge Tour but does not have the ability to carry such a large load or go off-road to the same degree). In short all three of the bikes reviewed are ideal for their particular uses. 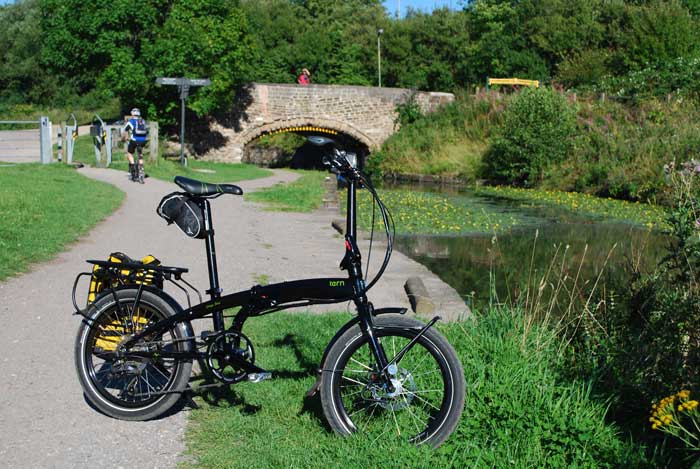 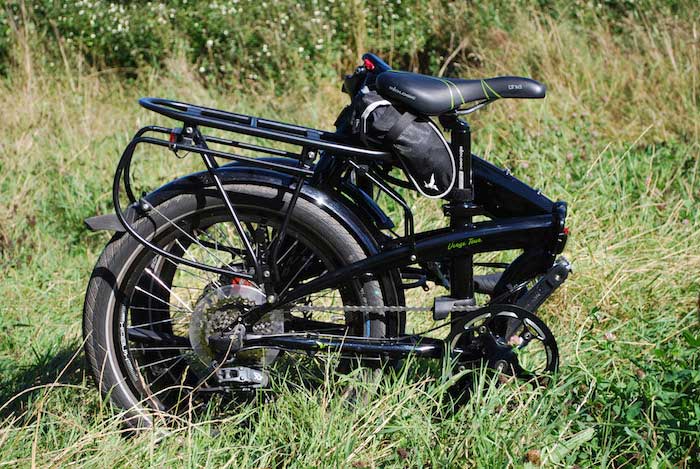 I rode this extremely well-equipped touring model along many 'dirt road' type sections of the UK's Trans Pennine Trail and wouldn't hesitate to recommend it as a full-on touring bike for on-road and towpath/forest plantation road touring. On one ride I fitted it out with four panniers (careful positioning required on the front and rear racks to prevent heel and toe catch).

The fold is relatively bulky compared to many folding bikes, especially the width, and the 17kg weight means it's no lightweight BUT there's no other folding tourer I know of so well equipped. 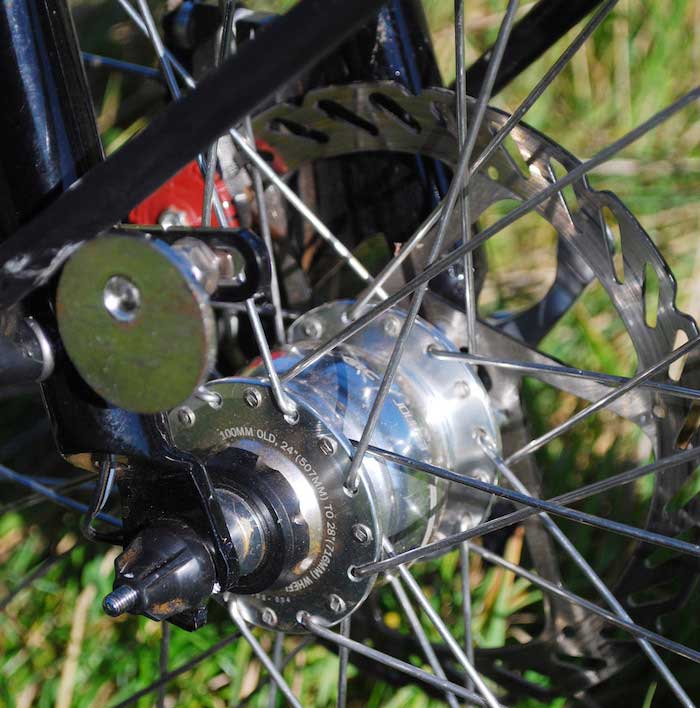 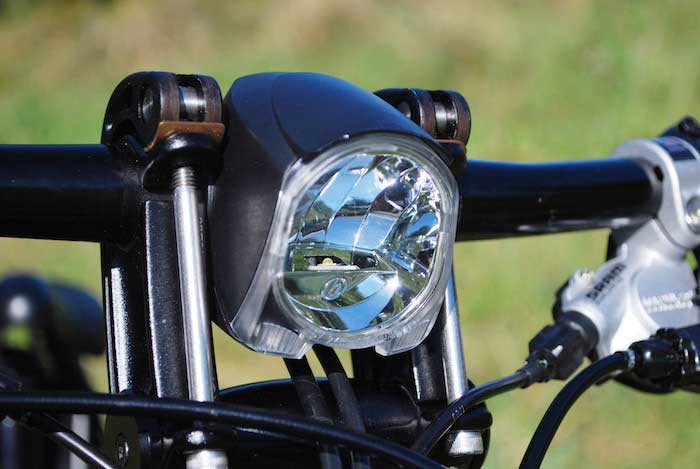 The dynamo powered Valo front and rear lights are more than adequate for unlit roads, while the Schwalbe Big Apple tyres soaked up anything the largely off-road Trans Pennine Trail had to throw at it.

It has great hill-climbing ability with the 530% gear range meaning I could tackle the steepest of hills but also blast down hills at speed; all with a full touring load. The SRAM Dualdrive gears combine derailleur and hub gears in one neat rear wheel package, meaning you have the luxury of small or big steps changes in gear selection as required; ideal for long tours where you want to conserve energy by using just the right gear. 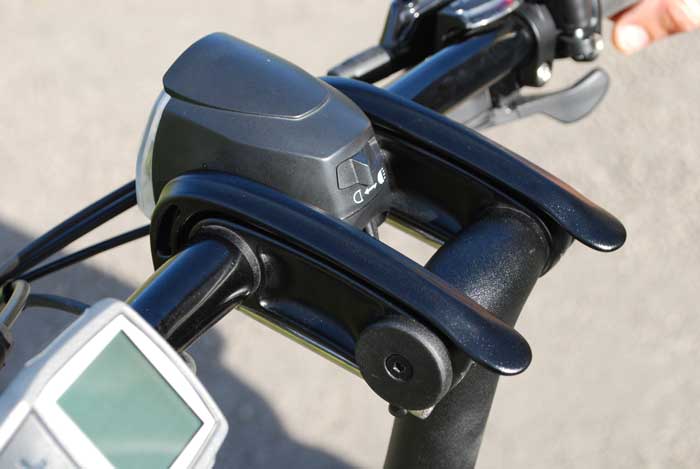 The Andros stem, pictured above and also used on the Vektron, gives lots of fore and aft adjustment to fit a wide range of shape and size of rider. There's even a seatpost integrated track-style pump which we had cause to use on another bike with a flat and it worked well. 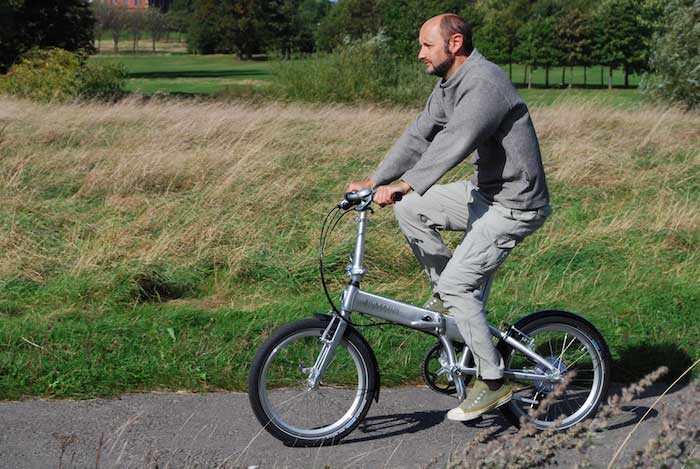 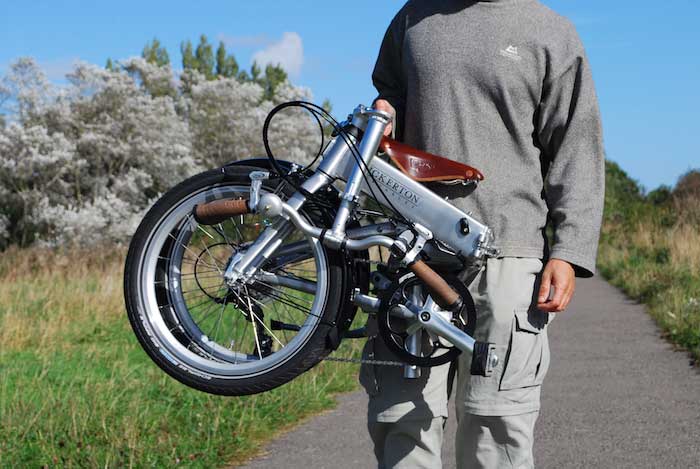 This is a wonderfully classy ride; the frame and bars felt superstiff, giving a reassuringly solid yet fast ride pedal with the neat fold producing a light, well-balanced package ideal for hopping on and off the all manner or urban transport.

Bickerton were pioneers of folding bikes in the 70s and the lovely stiff engineering on this model brings it bang up to date, while the styling of the brushed aluminium frame, Brooks leather seat and cork style bar grips give it a distinctly retro feel.

While ideal 'last mile' transport for those hopping between cities and towns, it also has rack mounts and I would be more than happy to go lightly-loaded touring on it (though avoiding any areas with extreme hills as it only has single chainwheel derailleur gears). 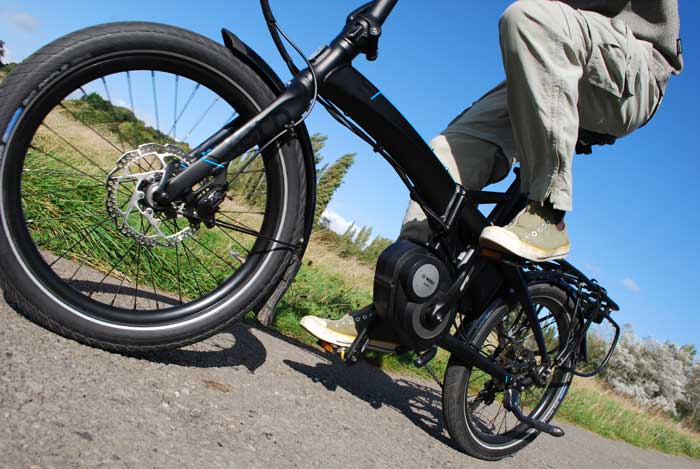 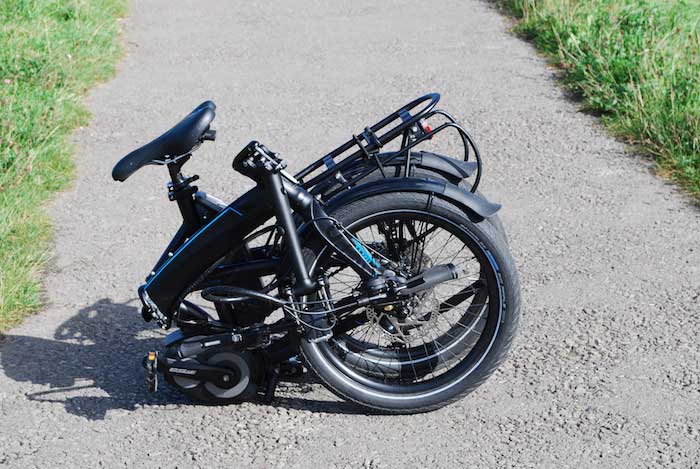 Presented with much fanfare at Eurobike 2016, the Tern Vektron combines the strength and cleverness of the Tern fold with one of the leading crank motor designs of electric bikes, Bosch.

The Vektron ate up the steepest of hills on either of the top two power settings (and it only features the less sporty Active Line motor system, not the e-MTB orientated Performance line motor). It also has the latest minimalist Purion handlebar display, meaning all the basic information you are likely to need is there at the simple touch of button; all very intuitive with no need to look at manuals or wonder what the myriad figures on the screen are actually telling you. 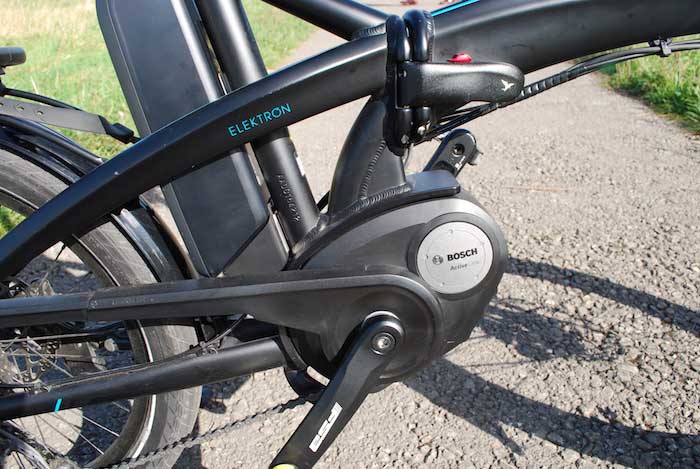 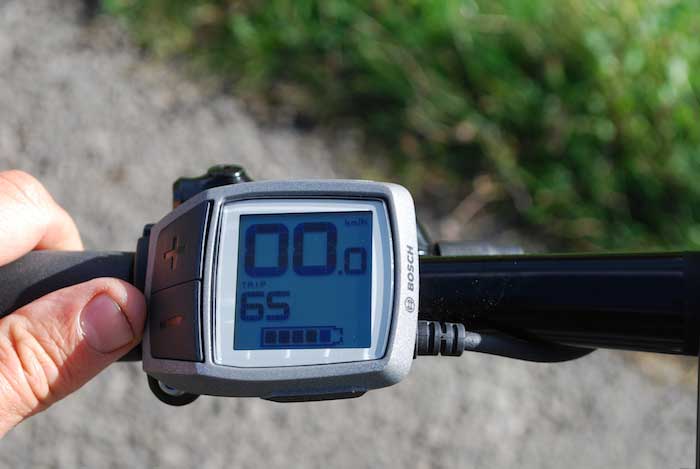 The lower two power settings are ideal for steady cruising over moderate terrain; in case you don't know how pedelec electric bikes work, you just pedal and one or more sensors respond to the strength and speed of your pedal strokes – in effect it feels like you have bionic legs but other aspects of bike operation are pretty much as normal.

Of course, with such a powerful motor and a frame engineered to house it and a battery to boot, this was never going to be a lightweight, so its not one for hopping on and off all manner of transport on, as the Argent can do. However, the fold is compact and it does open up the whole world of train travel to electric bikers who want a very high quality and powerful electric crank drive bike. That really puts it in a class of its own. 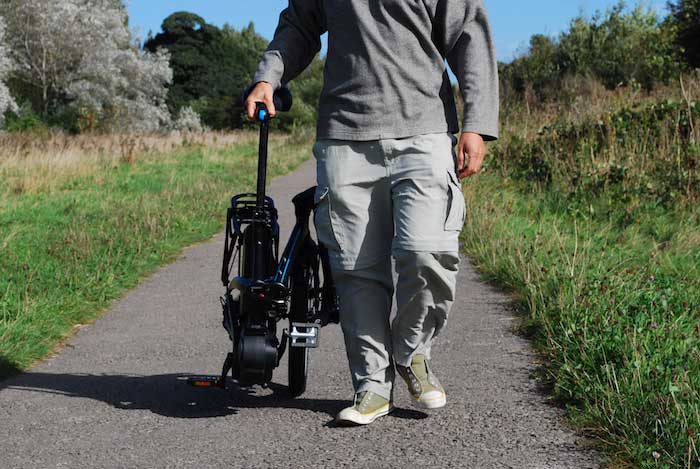 It's a pity the European spec only has a 300Wh battery (the US gets 400Wh for some reason) but, used economically, it should still be enough for a day's riding (Bosch's own range calculator says 50km-100km per charge).