Richard Peace knows a thing or two about electric bikes – what does he think about the Ridgeback Advance? 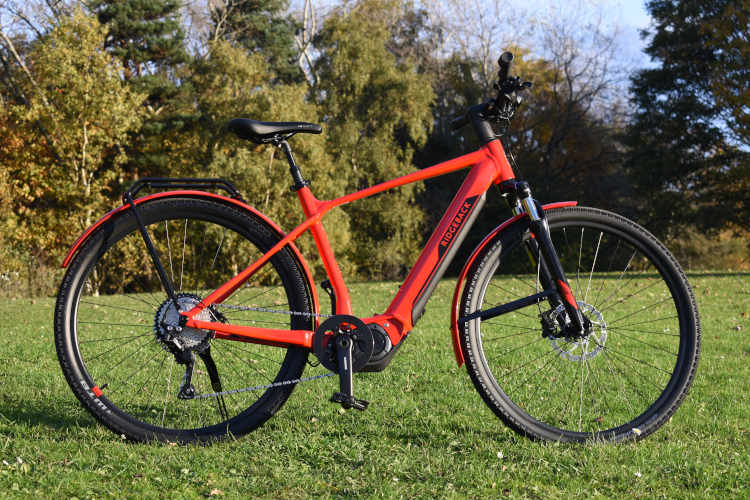 The Ridgeback Advance is a so-called mid-drive e-bike (also known as a crank drive as the motor sits around and gives power to the pedal cranks). It features Shimano’s E6100 mid-drive motor system – I have tried the E6100 on several e-bikes and it’s absolutely one of my favourites and certainly gives market leader Bosch a run for their money.

Mid-drives are generally a great choice of system; they are powerful and as the motor power is applied to the chain rather than the wheel (as it is with hub motors) you get the benefit of efficient and strong motor power over a greater range of speed. Downsides of mid-drives are that they are not as light as some smaller hub motor systems and they are usually pricier. 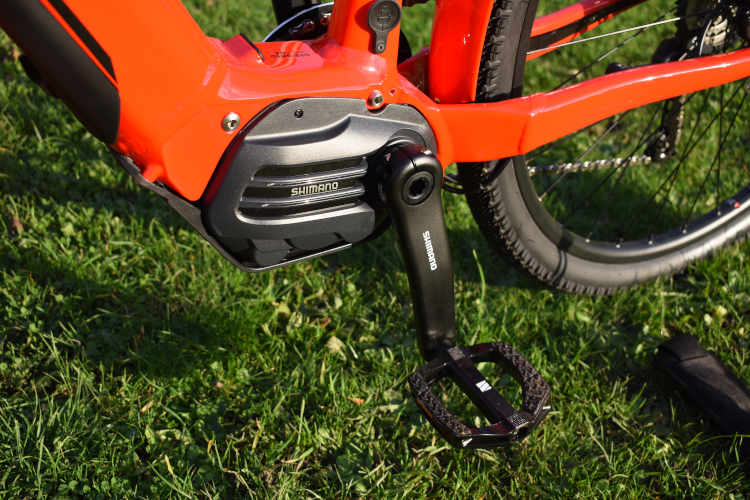 It’s a hybrid-style e-bike designed for myriad uses, whether it be commuting, touring or trail riding as the SR Suntour NEX coil sprung front suspension fork giving 63mm of travel, suspension seatpost and WTB Venture 700x50c cross-country style tyres help take the edge off forest road and farm track style riding. The hydraulic disk brakes are powerful and progressive as you would expect and should give you loads of stopping confidence, no matter what size touring load you are carrying. The 10 Shimano Deore gears should be more than enough gear range for most purposes and I found they provided crisp and clean gear changes too.

The Advance is fully equipped, with a sturdy looking rear pannier rack withrails integrated into the rear mudguard (there are sturdy looking mudguards front and rear with solid looking metal stays too), LED lighting powered by the main battery, kickstand and chainwheel guard. It really is a complete package. 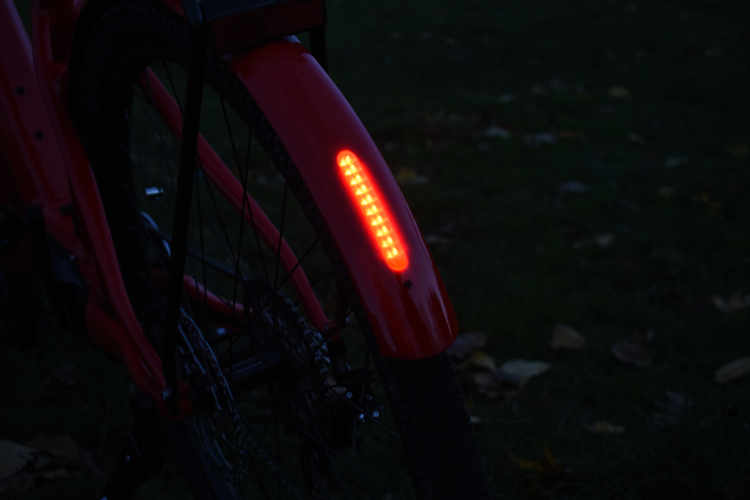 Like its main rival e-bike motor system rival Bosch, Shimano offers a variety of handlebar mounted displays (though Shimano doesn’t do a full-on colour display like Bosch’s Nyon). The Advance features the Shimano E7000 display which has bluetooth connectivity. In practice this means you can adjust the maximum torque on the motor to one of two settings (turning it down a little should help save battery capacity)  and you can also use your smartphone to display ride info and for route logging stats and navigation.

Ridgeback have a wide range of e-bikes worth checking out, especially if you want something a bit more budget priced (the Advance is their piciest non-e-cargo bike).

Sleek design and high quality of manufacture are evidenced by features such as as the frame integrated cables that enter the frame just under the handlebar stem for a super clean look and some of the best built mudguards you are ever likely to see on a bike! 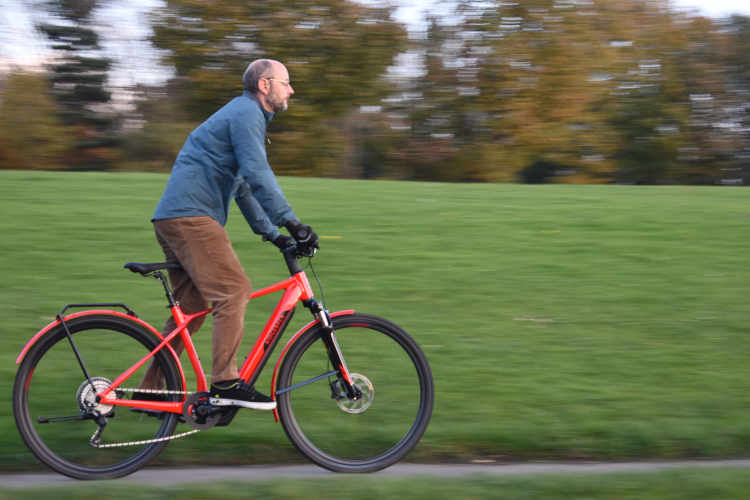 But it’s on the road I found the bike came into its own. The riding position is sporty yet comfortable  thanks to the slight rise and sweep of the handlebars, the motor is super quiet and super smooth and the torque sensor excellent at delivering power that feels totally proportionate to how hard you step on the pedals, giving a very bike-like ride. This is in complete contrast to some cheaper hub motor systems where all you are really doing is spinning the pedals fast enough to activate the motor. In the lowest Eco setting the motor support is definitely there but you also get a good workout up the hills. In the top setting of three, in combination with the low gearing, I didn’t find a hill it wouldn’t storm up if you really stand on the pedals.

The Herrmans H-Black MR8 E front light and rear mudguard-integrated light are another real standout feature; not only are they stunningly bright with great visibility from the side too, but the front light has a nice wide spread and strong central point meaning night biking on unlit country roads becomes a joy rather than an ordeal.

Connectivity is rather fiddly in that there are two apps to deal with if you want to avail your self of all of Shimano’s digital features; Shimano’s E-Tube Project app allows you to add or remove travel time, average speed, max speed, cadence and current (clock) time to the permanent display settings of current speed, trip distance, odometer and range and also to change between 50Nm and 60Nm depending on whether you want full blast up the hills or want to extend your battery range a little and get more of a workout. Shimano’s separate E-tube Ride app lets you customise and swipe through several display screens of feedback metrics but I found the Mapbox’s open source mapping most useful of all, especially its ‘Create a Route’ function which is the best automatic route creation tool specifically for bikes I’ve ever seen. 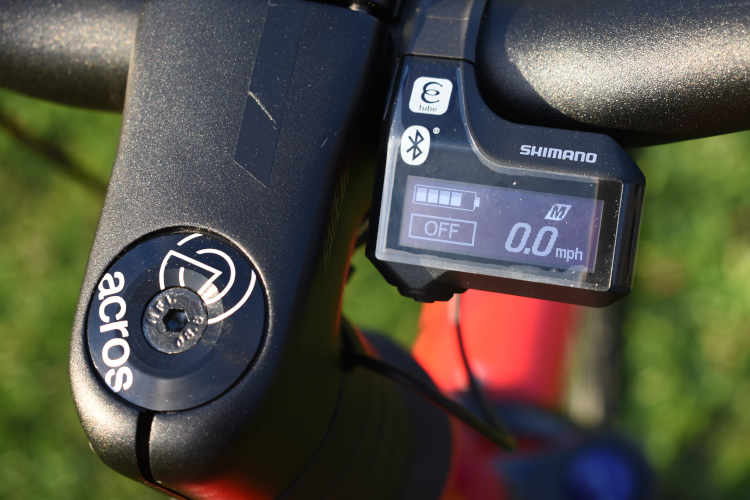 How far does it go on a charge?

The Shimano E6100 combines great sporty performance with great ‘fuel economy’. My riding over moderately hilly country using mainly the bottom two power settings suggested the Ridgeback Advance would take me around 75 miles (120km) – in other words if ridden with a careful thumb on the power level buttons you may well have a full day’s riding here. It’s just a pity Ridgeback haven’t chosen at least the option of a bigger battery to get an even more impressive range (Shimano make their own 630Wh battery that works with all of their many mid-drive systems).

Is it good value for money?

At the time it was released in 2020, the Advance looked very pricey – or at least it only really justified its high price tag for those who put a premiun on build quality and clean looking design, as there are plenty of other e-bikes out there with powerful mid-drives and the same size or bigger batteries for less money. However, if Ridgeback hold the price as other e-bikes pricing creeps up due to the unhelpful combination of COVID and Brexit, it will suddenly become much more competitively priced. It would certainly be a lovely and versatile e-bike to enjoy a French tour on. 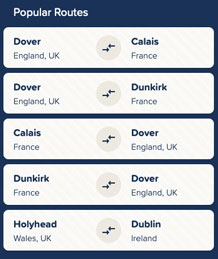