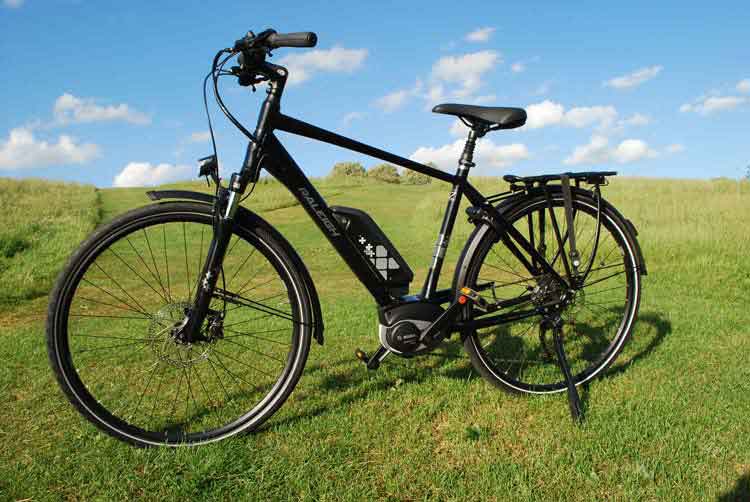 If I said Raleigh have a new e-bike out that uses the new Active Line Plus Motor from Bosch you might just think I was an e-bike nerd (true) and stop reading this article. However, if I said this new e-bike is one of the most ‘bike like’ and efficient e-bikes out there that blurs the line even more between electric and non-electric bikes, hopefully I’d have your attention.

The Raleigh Motus Grand Tour features a new motor that means it is much quieter than previous Bosch motors, also a bit lighter and, best of all, when the motor stops pushing you along – above the legal cut out limit of 25km/h (15.5mph) – the bike feels much more like a regular e-bike than many others I have tested. Clearly the e-bike industry have taken the criticism of some models of e-bike on board and the PR claims the motor means an e-bike experience that is "entirely like a normal bicycle, with no feel of resistance or noticeable cut off." 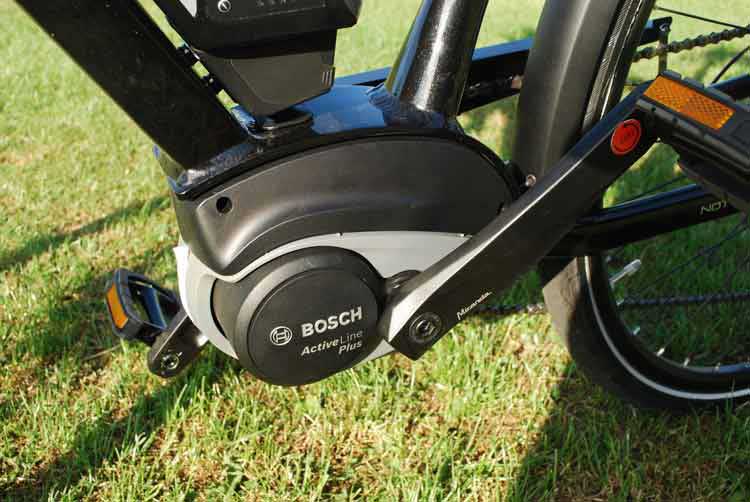 At 24.5kg all up weight (with battery), this is no lightweight but it is fully equipped with quality goodies, including a sturdy rack ideal for touring, full LED lighting powered from the main 400Wh battery, front hydraulic suspension, SKS mudguards, frame-mounted rear wheel lock, adjustable handlebar stem, suspension seatpost and an excellent Pletscher kickstand. For an e-bike with that amount of ‘extras’ this is a very respectable weight and, being crank motor powered and with a battery mounted on the downtube of the frame, the bulk of the weight is nice and central and low down, so it barely affects handling of the bike and even makes it not too bad to pick up and lift over steps etc.

The appearance of the Motus Grand Tour suggests speedy, stylish commuting and leisure riding but with great practical features and a lot of comfort built in too, making it a great pick for long-distance touring. The only option I would have liked to have seen is a 500Wh battery rather than the 400Wh, which is the only offering (though dealers may be willing to swap a 400Wh for 500Wh if you negotiate with them directly as the battery sizes are interchangeable).

With slick 700C tyres and a new more powerful Bosch mid-motor, the Motus Grand Tour is clearly also meant to provide a speed of turn combined with some modest off-road ability. This is evidenced by the Suntour Nex front forks with 63mm of travel, quite capable of tackling potholed minor roads and forest trails and towapths in comfort, especially when allied with the seatpost spring suspension and plush gel saddle, which I found a surprisingly effective combination.

You can see my full video ‘walk round’ review here. 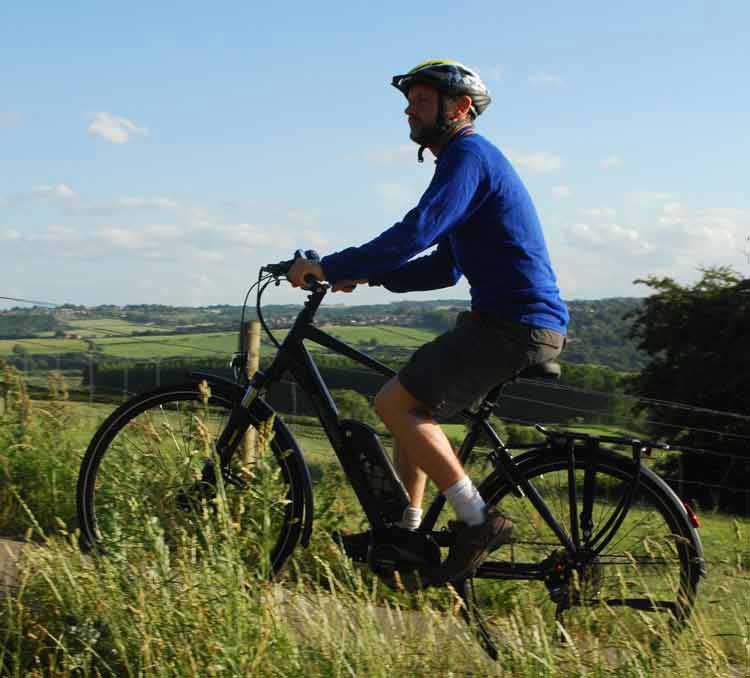 I completed around a 260km (160 miles) of riding around the UK’s hilly Calder Valley.

Initial impressions were extremely impressive. The riding position was very comfortable as I headed along a flat section of railpath and above the electric assist cutout level of 25km/h (15.5 mph), the bike continued to pick up speed for a few mph more until my speed levelled out around 19mph, maintained on this easy terrain quite comfortably. The combination of slick tyres and lack of much noticeable resistance from the motor above the e-assist cut out speed no doubt both play their part.

There was more of a test when a 30mph headwind, gusting to 50mph, sprung up as I get to the start of the hills, but even then there was no need to call on the Turbo level setting – allied with the 29-inch lowest gear there’s plenty of hillclimbing power and the 227% gear range means top gear is plenty fast too.

No doubt the more powerful (and heavier and more expensive) Bosch crank motors such as the Performance Line would get up the hills a few mph quicker but they certainly wouldn’t do it as economically as the Motus Grand Tour’s excellent motor, and still the bike feels no slouch up the hills, even with a moderate weight in the panniers. The bigger more powerful motors still have their place, though that seems to be increasingly on e-mtb style bikes and e-cargo bikes.

Perhaps best of all though is the feeling of assist you get from the motor, gentle but powerful at the same time, almost like being pushed assisted on your way by a quiet waft of air.

With the power cut off point being so subtle in addition to the quietness of the motor, this is one of the most ‘bikelike’ e-bikes out there and at times it’s easy to forget you are riding an e-bike, totally justifying the hype.

It also worth emphasising just how comfortable this bike is, even though sportiness, which it certainly has in bags, isn’t compromised in the process. I particularly liked the adjustable handlebar stem, a feature not seen on many e-bikes, or non e-bikes in fact. If you slacken the bolt off to rotate the stem towards the rider you get an increasingly upright and comfortable riding position. It’s a similarly easy matter to extend the stem forwards for a sportier position. Just be sure the teeth machined into the two parts of the stem engage in its new position, so it lock rigid when the allen bolt is tightened back down.

I adjusted the stem to a fairly comfortable, reasonably upright riding position. This meant my weight was reasonably well back on the saddle where I really felt the benefits of the generous gel saddle and the sprung suspension seatpot.

After sixty miles there was still around 1-2 bar’s worth of power left (approx 20% plus, assuming the battery meter system is accurate). Assuming I would have reached 65 miles before the battery emptied completely gives an extremely efficient consumption figure of around 6.5 Wh per mile.

Anything below 10Wh per mile is considered very efficient, so this bike has truly impressively frugal power consumption if ridden reasonably carefully. This is nowhere near the 177km (110 miles) on a single charge you might hear claimed for the system (though note that is up to 110 miles in fact).

However, using only Eco setting and in windless conditions, over gentle terrain and with a lightweight rider it certainly sounds plausible. If you wanted even greater range you could of course buy a spare second battery, or it might be worth talking to your dealer about the possibility of swapping the 400Wh battery for a 500Wh battery as mentioned above.

The Intuiva LCD display gives the standard info you get on most e-bike displays such as current speed, average speed, current trip distance, odometer (total distance travelled by the bike) and clock you also get a ‘power meter’. This clever feature is simply a bar that flickers up and down as you pedal – the higher the bar goes the more power the motor is contributing to your progress. 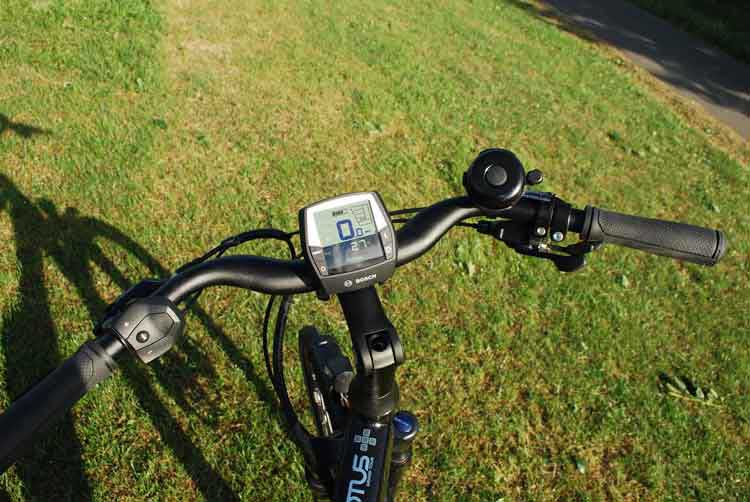 Sometimes it isn’t easy to judge the optimum power you need – especially on such a quiet and natural feeling motor – and often you can maintain more or less the same speed by dropping a gear, using more leg power and draining the battery less, without actually feeling you are doing a great deal more physical work.

That said, if you want to make up time and you aren’t trying to eke out maximum battery range you can set the bars forward, put your head down and really go for it in the higher power settings…

Another handy feature of the Intuiva display is the range calculator which predicts how many more miles you will be able to ride on the remaining battery capacity. I assume this adjusts to take into account how much power individual riders use – all e-bike riders use different settings to different degrees and are different weights  – but this feature looked to be working pretty accurately even on this new bike.

Don’t be surprised if it takes a while to settle down though before it gives more accurate readings. The range calculation is dependent on what your power setting actually is, so I found myself scrolling through the bottom three settings of Eco, Tour and Sport and taking an average reading.

This is an extremely versatile and good value e-bike with a cracking motor, so hats off to Bosch for further refining and improving an already well-regarded and very popular motor design. Hats off to Raleigh too for combining the motor technology in a thoughtful way with all the other elements of the bike.

The result is an e-bike that is equally at home commuting or shopping around town as it as being ridden for fun or thrills out in the open country and on Sustrans-style traffic-free trails or on a grand tour of France. 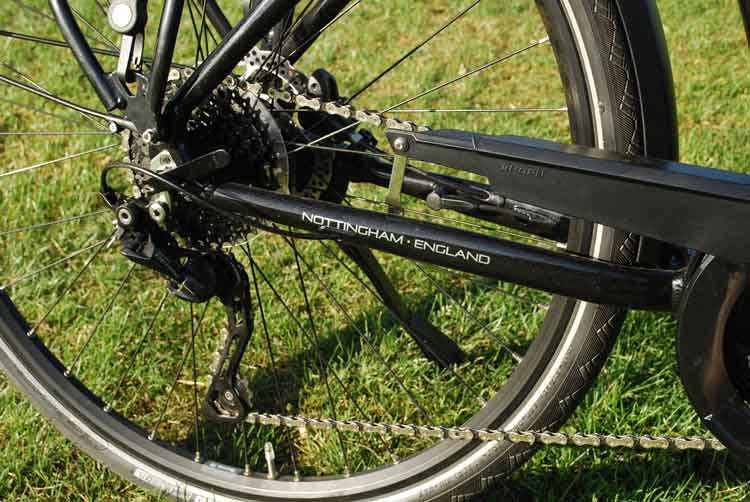 Weight: 68kg
Riding style and fitness: Used at lower power levels where possible to get a moderate but enjoyable workout, only moderately out of breath

Raleigh Motus Grand Tour electric bike
Price: RRP £2150 for the derailleur model and £2250 for the hub gear model. For other models, see below.

Richard Peace is the author of the official English-language guidebook to the Veloscenie Paris-Mont-Saint Michel bike route and the Sustrans guide to the London-Paris Avenue Verte. He also contributes to A to B magazine, Bike Europe and Eurobike Show Daily.