Does your folding bike sometimes need a little boost? Richard Peace tries the Nano electric kit out on his Brompton. 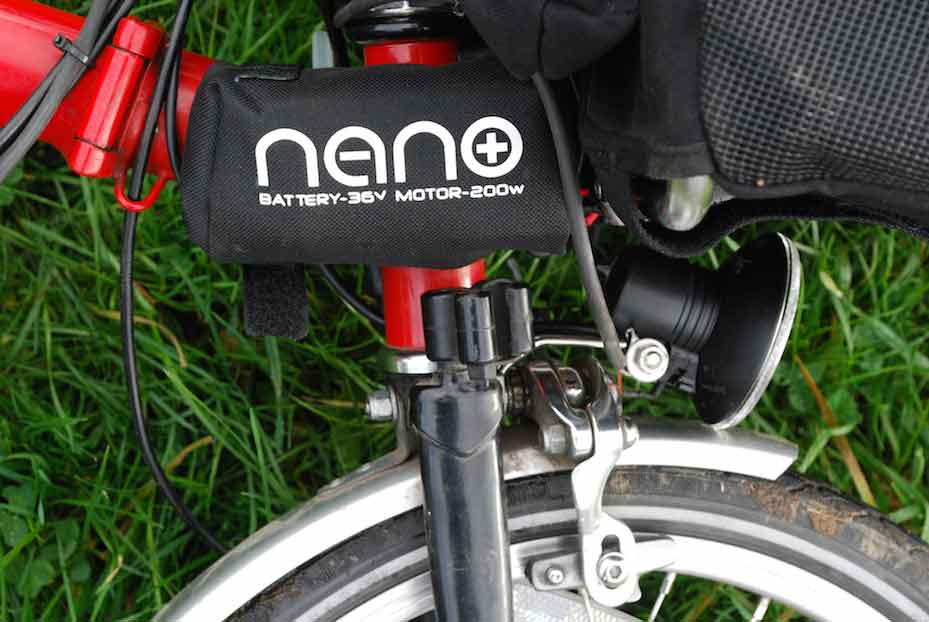 Given how useful folding bikes are for hopping about France's increasingly bike-­friendly main cities, it's surprising there appears to be only a single Brompton dealer in the whole of the country, unsurprisingly in central Paris.

Don't let that put you off though; the Brompton's famously quick fold is great for hopping on and off metro, bus and tram systems all over the country then pedalling off in great style. If visiting the hillier cities of the south and east, you might want to look at the adding a motor, and if you want to keep your Brompton reasonably light and manageable when folded, there is really only one contender, the British­-designed Nano­ Brompton. 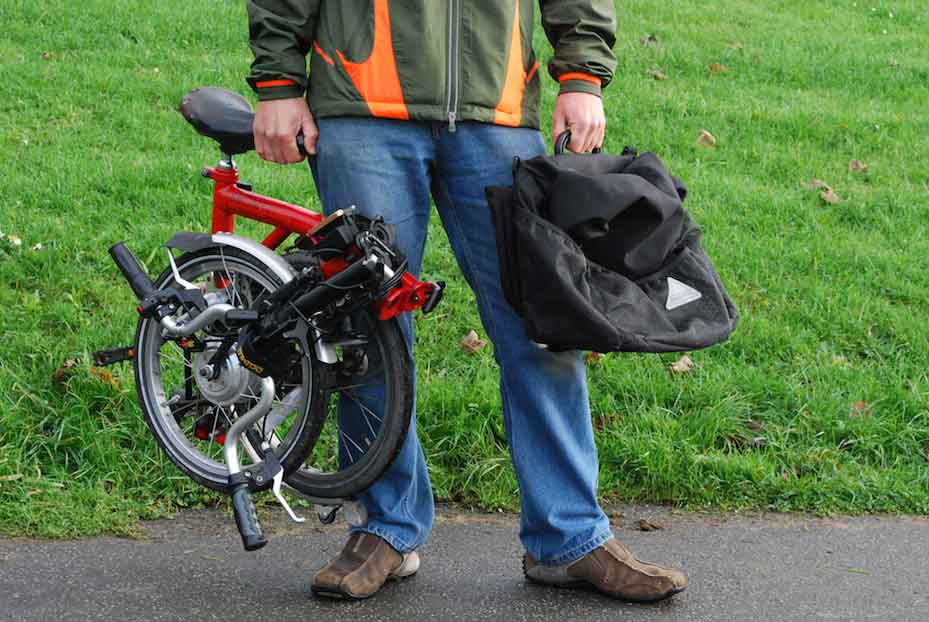 The retro­fit kit is based around a small, light and rather ingenious front wheel hub motor produced by Chinese firm Tongxin. The Brompton kit certainly merits the Nano epithet, because at 2.3kg it is one of the smallest, lightest motors available. Although fitted with a conventional pattern sun-and­-planet gear system, the Tongxin is very unusual in employing friction rollers rather than gear cogs to transmit the drive.

In the UK the motor is available in several guises offered by different companies and the situation has changed quite a lot over the years. At the time of writing, Ansmann and Cytronex were offering the motor on larger wheeled bikes but only Nano Electric Bikes of were producing their own take on a Tongxin based kit. The full title of Nano 2 reflects the fact it has been developed over several years by electronics expert Tony Castles. 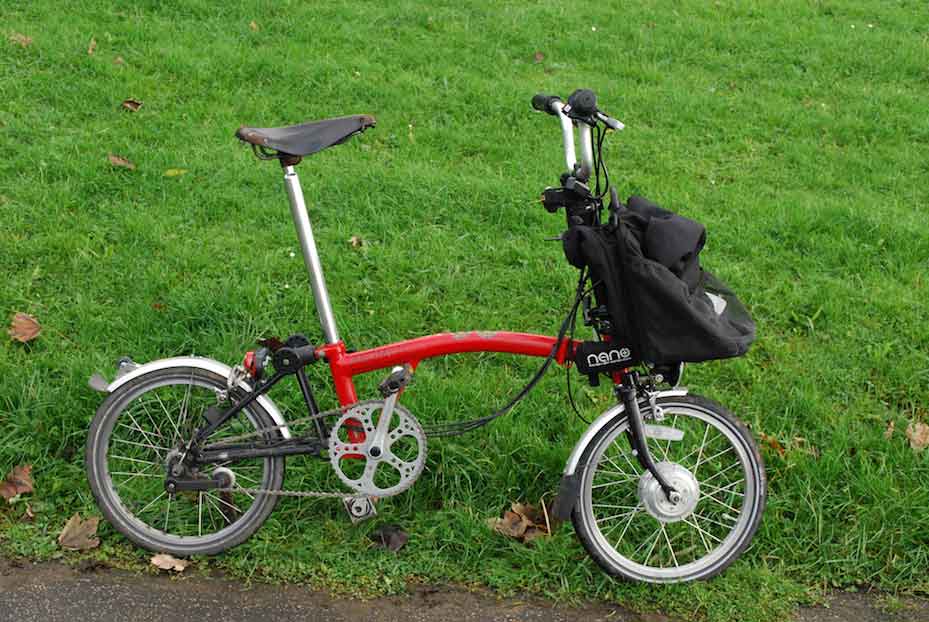 The Nano is one of the few hubs that will fit into the narrow forks of the popular Brompton folding bike, as it comes in a narrow 80mm version though forks will still need spreading a little (it's therefore compatible only with steel, not titanium forks).

A small controller velcros neatly onto the side of the frame and the battery is housed in the front bag, with copper contacts making the connection with the motor once the bag is in place. This arrangement means that you can remove the bag and battery and have two fairly easily carriable packages when the bike if folded.

If installed to a professional standard this is the most elegant solution out there for electrifying the Brompton and means a brilliantly folding bike with electric assist that allows great travel flexibility in combination with public transport. 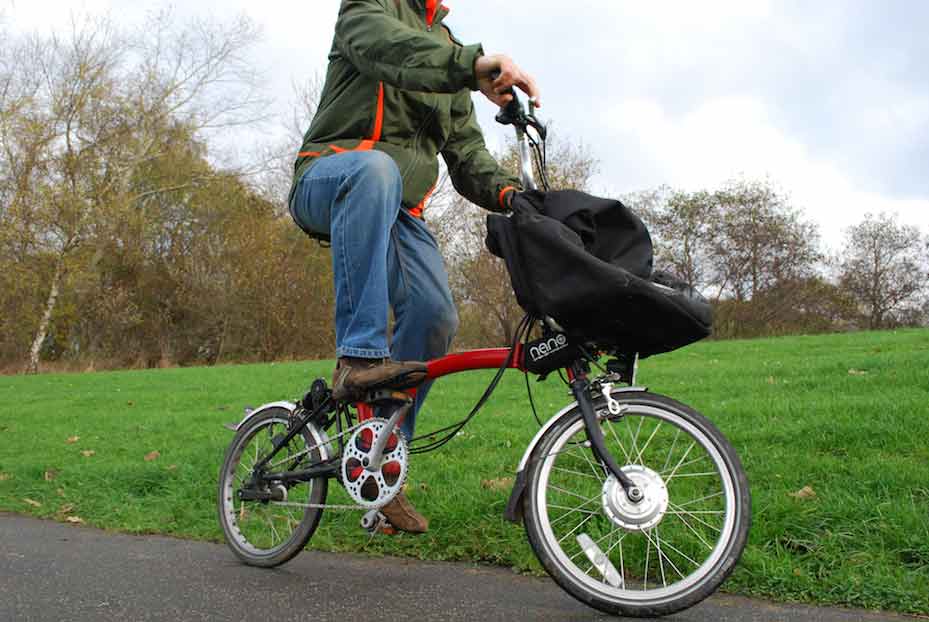 Riders often comment on the surprising amount of power available from such a small hub. This may be an illusion caused by the near silence of the motor, the effect being rather like an invisible hand pushing you along. In fact, most gearless hub motors are just as quiet, but conventional sun-and­-planet gears can be quite noisy ­ not a problem with the Tongxin’s friction­ drive.

Having said all that the Tongxin isn’t the most powerful motor out there for Bromptons (though it is certainly no slouch) but it scores very highly for light weight and silent running, making it one of the least conspicuous retrofit options. If you want a heavier, more powerful but less elegant solution, you might want to check out the Sparticle kit from the Electric Transport Shop.

The Nano also wins over other competitors as it comes with an optional lighting kit that can be run directly from the bike battery, so assuming you keep the battery charged your lights should never run out of power. 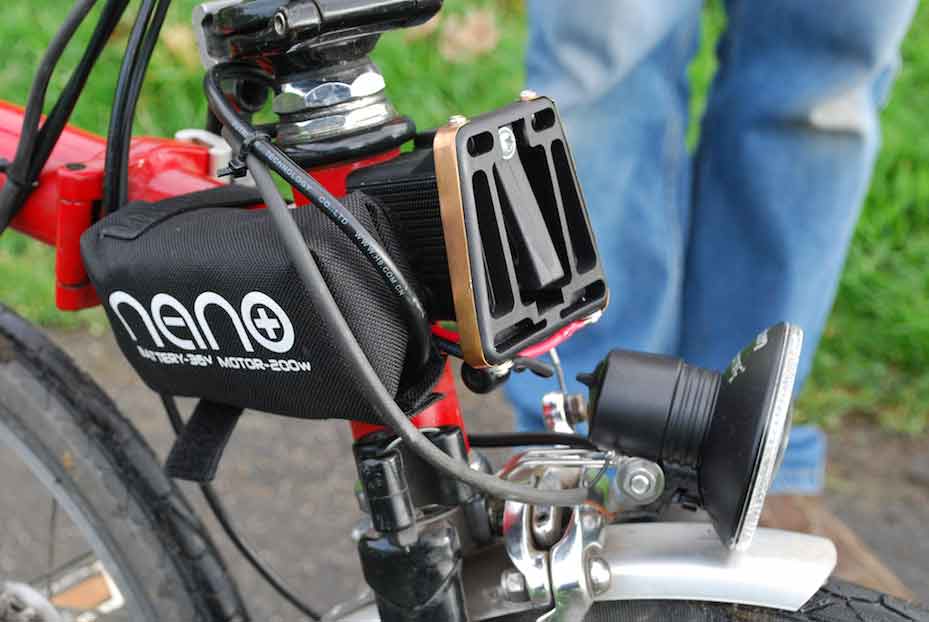 Kit weight is approx 5.2kg (depending on battery option). Nano are working on a much lighter version for short hops around town utilising a power tool battery (current lithium­ion battery options are 180Wh and 360Wh capacities). The current larger battery option has a potential range of 40­-50 miles if the throttle control is used sparingly. There is a 'pedelec' option but I much prefer the throttle only option. There is only one motor speed option at 290rpm giving a top assisted speed of 14mph or so.