Review: Installing a Gilles Berthoud mirror on your bike

Published by Andrew on 8 September 2021

Bob Zeller shares his thoughts on installing a mirror on his touring bike.

I surprised myself a few days ago. I bought a rear view mirror for my touring bicycle. I did that for safety’s sake because my hearing isn’t as good as it used to be and sometimes I don’t hear a car coming up behind me. I think that applies equally to electric cars, although some say that whether a car is electric or fuel, it’s the sound of the tyres on the road that we hear – or don’t hear – not the engine.

Mind you, even when I can sense traffic behind me, it gets harder every year to swivel my head and upper body sufficiently to get a good look before making a turn. That’s in spite of years of Pilates and stretching classes.

I am not the only one facing this problem, of course, and for many, mirrors are the solution. If you're in a bunch on a fast club run, everyone’s senses are fully tuned in. But when touring, you're often more focused on the scenery. At least I am.

When it comes to bike-mounted mirrors, there are choices: some fasten internally to to a bar end, some clamp atop handlebars, some attach to the brake hoods and some to the cycle’s head and down tube. There are, as well, mirrors that attach to your helmet or glasses, but I had tried a pair of those many years ago and found them impossible to come to grips with. For some, they are an ideal solution, but not me.

Instead, I opted for a bar end mirror made by Gilles Berthoud, the French company famed for it beautiful handmade leather saddles, panniers and other first-class kit. Made of highly polished anodised aluminium they look good, in my view anyhow, on a bike. Berthoud also supplies them in coloured finishes if you prefer and, as well, offers matching colours for the other bar end. That’s quite typical of Berthoud products. Style is every bit as important as function.

Equally typical was the high price - £56  (approximately €66) is a lot to pay for something that some other companies supply for as little as £10. But considering Berthoud’s reputation, the price was reasonable. Equally, Velo Duo, the UK company that supplied my mirror, is a company that specialises in touring products. They ride bikes and they tour. So when I called them to ask about the mirror, I spoke with a knowledgeable person who uses this mirror every time he gets on his bike.

Now that I have installed my new mirror and ridden 100km or so with it, I think it's great. Mind you, I didn’t test any of the other makes, so proper comparisons aren't possible. A few fellow cyclists have told me that some bar end models offer a rather small image. That might be true in some cases. Other cyclists use larger mirrors for a bigger picture. But I prefer the mid-sized Berthoud mirror because the larger ones stick out too far and can be easily damaged if the bike is rested against a wall. Even the smaller Berthoud mirror might do the same, but the company has designed the ball joint connection to include a cut out which allows the mirror to fold flat. 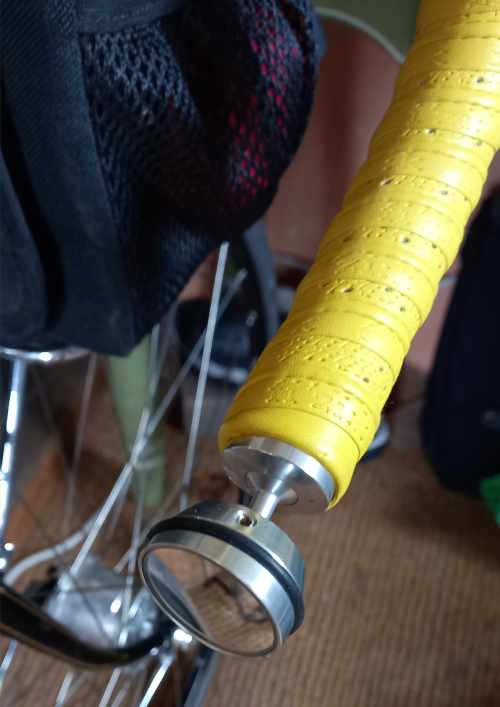 While Berthoud’s 34cm-wide screen doesn’t provide a Cinerama-type wide-screen view, its convex design means you do get the necessary information. Mind you, it needs to be positioned carefully otherwise you might get a view of nothing but your knee. But once it is fixed in the right place it will remain there. I hit a couple of potholes (one deep enough to ring my bell) on one ride and the mirror didn’t move at all. But, if you do knock the mirror out of position, the ball joint fastening makes it easy to reposition.

Of course, bar end mirrors, well designed or otherwise, won’t work on a bike that has flat bars that extend outboard at an angle. They’ll be pointing in the wrong direction. In that case, you will need a mirror that mounts on top of the bars and not in the bar ends.

If you have bar end shifters, you won’t be able to use bar end mirrors as well. Unfortunately, you have limited alternatives. Some mirrors can be fastened to the head and down tubes. They apparently work well but if you use traditional panniers when touring, I’m told, the panniers will usually block the mirror’s view. There are mirrors that mount on a ‘wand’ means but apparently that means excessive vibration as well as a limit on the number of places to put your hands on the handle bars.

Whatever type of mirror you chose, you’ll have lots of choice of manufacturers. Major cycle accessories suppliers like Bush & Muller, Cat Eye, Zefal, Topeak and Blackburn make mirrors. There are as well, any number of no-name brand companies in the market.  But take a good look before you buy. I saw many that looked to be poorly designed and flimsily made - not something that would survive too many tours. Touring bikes have to deal with lots of bumps and bangs and cheaply made plastics have no place on a touring bike.

If rear view mirrors can’t provide a solution for you, there is another option. Garmin make the Varia, a radar unit that can signal when a car is approaching from behind. You need a compatible Garmin GPS or a phone to receive the signal and the Varia requires recharging after seven hours of use. I suppose that is exactly what some cyclists want. But, thinking, with a list price of £170 (€190) and doing little more that a mirror, it makes the £56 Berthoud mirror seem a real bargain.