Published by Andrew on 1 October 2018 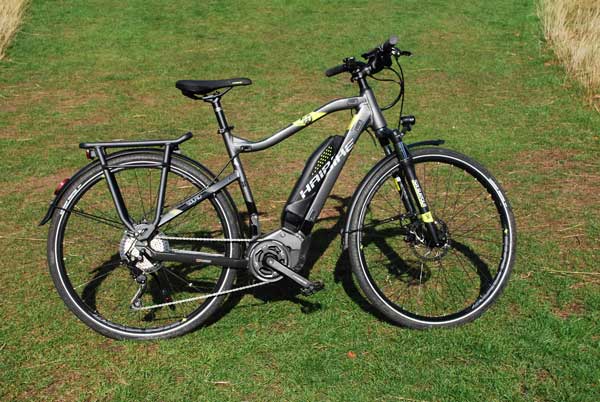 This e-bike comes from one of the most respected names in e-bikes, German manufacturer Haibike and is a very competitively priced model ideal for road and light off-road touring and leisure riding.

It’s got just about everything you’d want for long distance touring apart from a large capacity battery (though note higher specced Sduro models have bigger batteries and some use Bosch motors as an alternative). It’s a standard style pedelec; you pedal and the motor responds to your pedal pressure up to around 16mph, when the motor cuts out. The amount of assistance depends on both how hard you pedal and which of the four power settings you choose. The different levels provide 50, 100, 190 and 280% respectively.

Several weeks of test riding left a very favourable impression; the toggling through the four power levels and display settings was very easy and intuitive with plenty of power on tap even for hauling a fully loaded trailer and panniers (40kg+ worth!) up some pretty steep hills. If you want true e-mtb motor performance look elsewhere (and pay more….), but this is a super motor for tackling all but the most extreme hills or bumpier tracks. It generates some noise but not as much as some other crank drive motors. 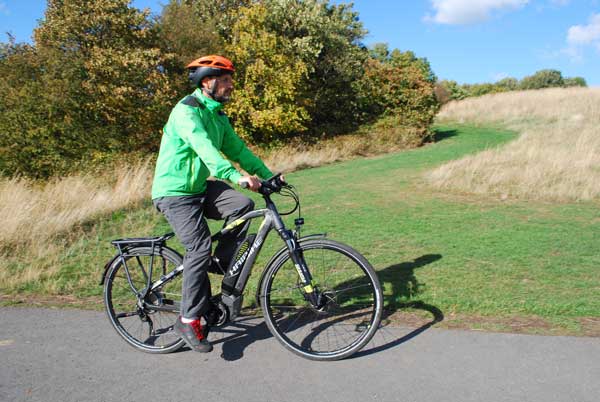 Brake performance from the hydraulic disc brakes was excellent and it’s a good sign of overall quality and safety of e-bikes that hydraulic disks are just about a standard fitting these days. The 10 derailleur gears have a bottom gear low enough for most steep hill climbing scenarios. The front suspension is OK and features a lockout for smooth tarmac, though it feels a bit clanky when used at speed.

The bike’s LED lights are powerful enough to light your way without street lighting, and the front suspension is OK for moderate off-road use and has a lockout for when you are on tarmac. The package is completed by good quality pannier rack, mudguards and a sturdy kickstand.

I had one or two quibbles; the funkily-shaped frame looks nice and offers lower step over height than a regular crossbar which is eminently sensible, but the bent seat tube actually limits how far down the seatpost can go (though easily sorted with a hacksaw if you don’t mind wielding one on a brand new seat post!) I also felt the tyres would stand a bit more aggressive tread as I took the bike down some broad but quite bumpy and steep earth tracks where extra tyre grip would have been useful.

Overall though, at €2299 (circa $US or £2040) and widely discounted online, it represents great value for a fully featured e-bike.

The Sduro Trekking 4.0 is the entry-level model to Haibke’s Trekking range it’s no surprise it is sensibly specced to get maximum performance for the money.

The Yamaha PW crank drive motor makes most use of its attributes; it’s a high quality motor with high torque concentrated in the lower cadence range, so great for e-bike touring with heavier loads where you need the power for setting off (especially on hills), but perhaps less so for trundling along at a steady pace. The four power levels are nicely graduated to get the most out of modest 400Wh capacity battery with percentage assist levels of  50, 100, 190, and 280% and the torque sensing needing a reasonable amount of input from the rider pressing on the pedals. 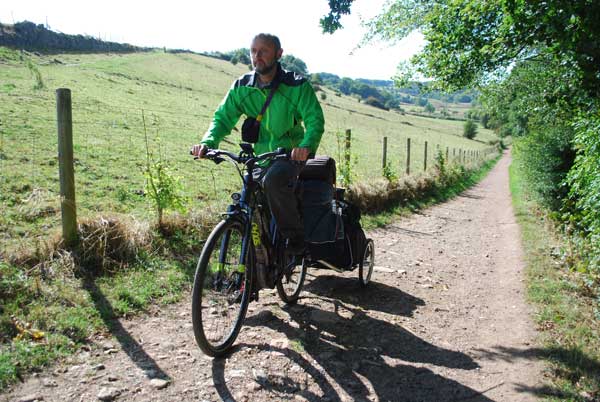 For road riding I found the medium sized frame gave my 5’8” body a nice sporty riding position for faster tarmac riding. Although it lacked the brute power of, say, a top of the line and much pricier Bosch Performance Line CX motor, it gave plenty of climbing oomph when ridden in a sporty fashion in slightly higher gearing than I might normally select.

Perhaps not surprisingly on such a (relatively) modestly priced e-bike, the motor is at the heavier end of the today’s weight range for crank motors, as new, lighter motors are announced every year. Its stated weight of 3.5kg starts to look a little heavy against its bigger, yet lighter and more powerful, brother the PW-X which weighs in at 3.1kg. And at the leisure end of the spectrum, new motors from Bosch (Active Line Plus) and very recently Shimano’s E5000 come onto the scales at 3.2kg and 2.5kg respectively.

Like all e-bikes the range predictor seems fairly limited in the computations it makes in that it doesn’t seem to learn from the actual power consumption that you use on the bike, ie every time I recharged the battery to full it gave a range of 105 miles or so in the lowest 50% assist mode, clearly not taking into account any recent riding riding I had done. Still, like most of these range predictors they are a useful rough guesstimate tool once you get used to each one’s idiosyncracies.

Also like many e-bikes the walk assist function was rather weedy, which rather negates the point of it – you need lots of tourque on this feature for helping you push a fully loaded bike up steep ramps etc where the circumstances dictate you need to dismount.

Still, overall impressive performance for the money. It will be interesting to see if the prices for Yamaha PW continue to drop or if it gets replaced altogether by newer variants of the PW family of motors.

About our contributor
Richard Peace is the author of the official English-language guidebook to the Veloscenie Paris-Mont-Saint Michel bike route and the Sustrans guide to the London-Paris Avenue Verte. He also contributes to A to B magazine, Bike Europe and Eurobike Show Daily.