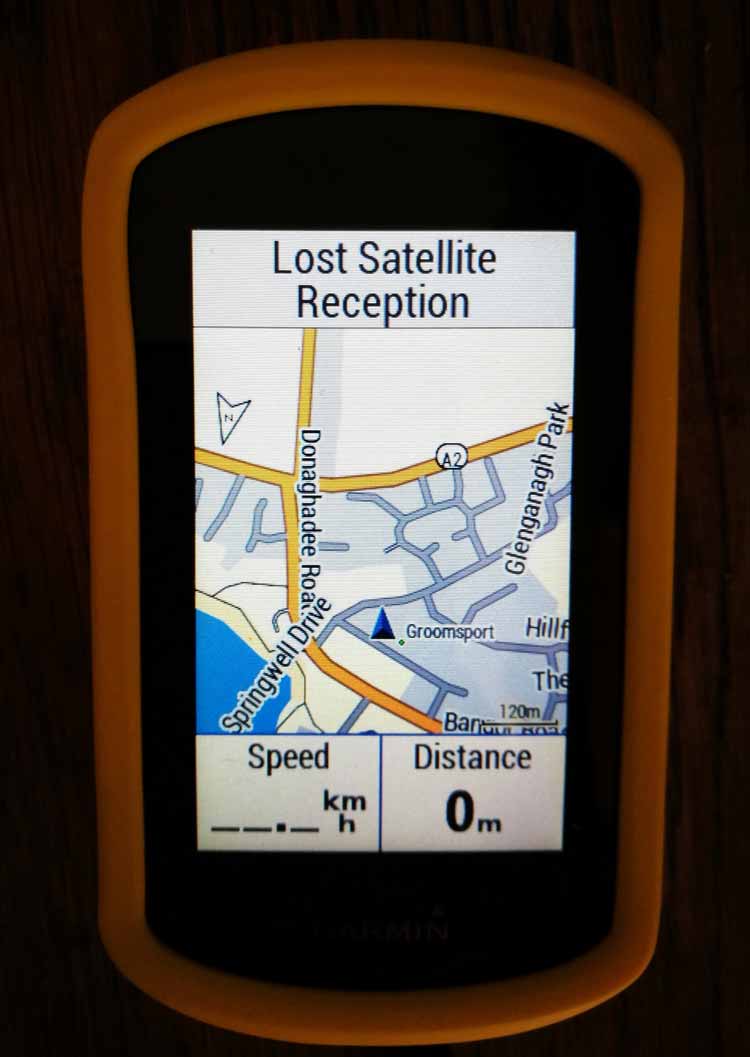 For years, I always toured using a map, sometimes a compass and usually a willingness to get lost. When I would do my route planning before setting out, I would just look for whatever D roads connected the places I wanted to get to and then set off with full confidence that those roads would be just fine. And they usually were.

While that was a perfectly good way to tour a few years ago, today not all D roads are good cycling roads, and others that weren’t are now wonderful. And then there are the C roads, which are almost always quiet and being used more by farm machinery than cars. So now I use a much wider variety of roads so I can try and stick to quieter and – hopefully – more interesting ones.

But to do this, it usually means I often arrive at an intersection which, in the past, I would have most likely just pedalled on through. Nowadays, I usually need to consult the map to see if it is at this point that I need to turn onto another road. And that’s the rub. Changing from one road to another much more frequently means lots of map consultation. And, after a while, that’s a pain.

The solution was get a GPS unit. And when I did that three years ago, it was a revelation. Mind you, it was a struggle to understand how to use it at first (I’m a real ditz when it comes to tech), but the Garmin Edge Touring was a godsend. I could start riding, follow my progress along my route and, best of all, get plenty of turn-by-turn information for intersections (complete with graphics).

There’s lots more info as well – some of it quite useful, such as cycling time, speed, average speed, distance already travelled, distance to destination, compass points, altitude and much more. All good stuff. 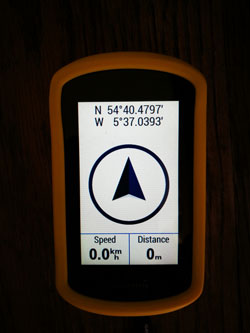 When Garmin announced a new model, the Edge Explore, they claimed it to be even better for touring. So I did my homework and then the deal.

The Edge Explore – just like the still-available Edge Tour and Edge Tour Plus (an upgraded version of the Tour) – is specifically designed for touring. If you do wish to up the training element, you can purchase some optional training features like cadence counting and heart rate measuring – and you can share your data with training partners as well.

But it is as a touring device that the device excels. In my opinion, while the Edge Touring was a perfectly good touring device which I happily used for three years, the Edge Explore is very much better.

In the first place, the multi-colour touchscreen is a bit larger, making the mapping and other information on it much easier to read at a glance, especially in bright sunlight. And it is ‘glove friendly’, even in the rain. But also, the Explore shows and records even more data than the Edge Touring – not all of which I need or use, I suppose, but sometimes it is fun to have.

However for me, the very best reason to choose the Edge Explore over the Edge Touring is that the Explore uses both the American GPS satellites and the Russian ones, unlike some other devices. When you go off course, deliberately perhaps to see something in the distance that looks interesting or a restaurant down a side street, it will resume its work when you cycle back and intersect with your plotted course. That didn’t always happen with the Edge Tour. With that unit, the GPS would sometimes decide it knew a better route than the one you programmed and that became the route you got. 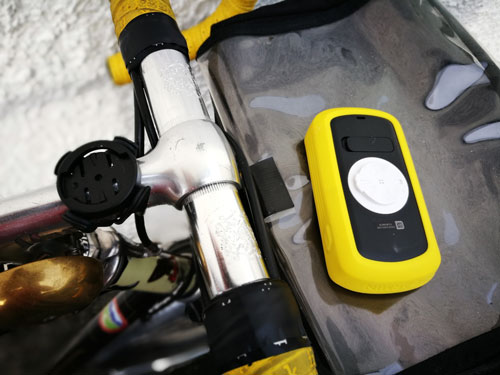 The mount fastens to stem or handle bars with stretchy bands and a plug on the underside of unit slots into the mount with a quarter turn. The set-up pictured allows you to use a 'bar bag' as well.

When it comes to planning a route, you have a couple of choices. You can use the device to create a route for you between two points. And if you do that, it will give you a route that it already knows is the primary route used by cyclists. Frankly that is not always what I want. A route used for Sunday morning club thrashes is not necessarily my idea of a good touring route between those two points. Nevertheless, many might disagree. 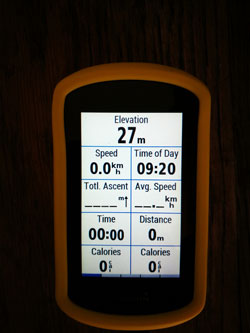 Another option if you don’t care where you go but just want to get some miles in is to ask it to give you a circular route for a given distance. That could be handy if you are staying for a number of days in one location and doing daily rides out from there.

But when touring, I don’t use either of those functions. Instead, I plot my routes using RideWithGPS, one of the many route planning websites that are available these days. There are lots of others, including Garmin’s own Connect, but RideWithGPS works really well for me. It can be used to automatically create a route between any two points using a RWGPS-designed criteria – road types and surfaces, elevation are the principle elements of that criteria – or you can custom design your own. And then the route can be loaded directly into the Garmin.

For even me, it was relatively easy to learn how to use it. But one big plus with RWGPS is their help service staffed by experts who provide easy-to-understand answers using two syllable words to my rather dumb questions. Incidentally, you don’t actually need a separate GPS device to use RideWithGPS or the other routing services – you can use your mobile phone instead. But waterproof issues and battery power makes that a less than satisfactory method for touring cyclists. (We have more general information and links for riding with a GPS here, including various route planning sites).

Besides navigation, there are some other features of the Edge Explore that many would undoubtedly find valuable. For instance, you can programme it to send a message to someone via your mobile phone should your bike come to an abrupt halt – something the Edge Explore interprets as a crash. As well, if you purchase special Garmin rear lights with a built-in radar-type facility it will detect approaching cars. Important to some, I suppose, but not me. Less exotic are the options for recording power wattage, cadence and heart rate. But again, of little interest to me.

All of these functions take power, of course. Garmin says the Edge Explore is rated at about 12 hours of battery capacity. For a few users, that’s a deal breaker. But those folk tend to be more expedition cyclists that cycle tourists like me. We can recharge our units at night in the hotel or B&B, though those who wild camp might want to carry a small portable power device or even connect to a hub generator.

But whether you use all of the features or, like me, just a few, the Garmin Explore is, in my view, a first-class bit of touring kit. It is a welcome addition to my touring tools.

About our contributor
Bob Zeller, a now-retired UK-based Canadian journalist, spent much of his professional life covering major European and North American professional cycle racing for the (Toronto) Globe & Mail, Canadian Broadcasting Corporation, Winning Magazine and others. His beat included the spring and autumn Classics, the Tour de France and world championships. While he has enjoyed just about all types of cycling – sportives, audax and just riding his bike to the shops – it's touring that he has always loved the most. And it's touring in France that he enjoys the most.