Published by Andrew on 15 September 2021

Bob Zeller looks at the frustrations of keeping your Garmin GPS charged during long tours and road-tests the Garmin Charge Power Pack. 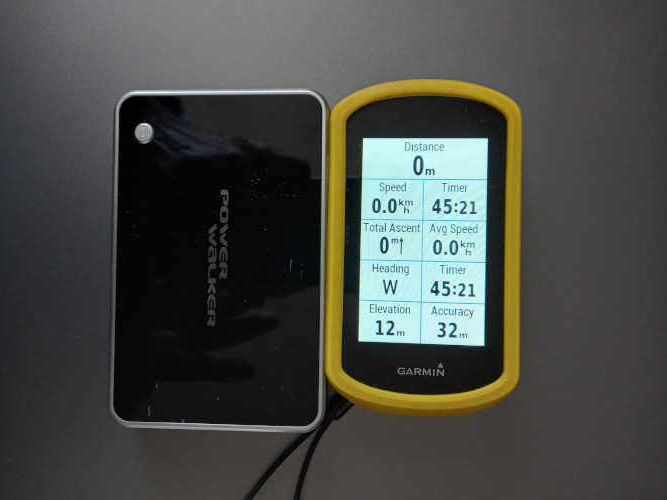 Note: This is an update to the Garmin GPS story originally published April 19, 2019.

After two tours in France and hundreds of local rides, I still think the Garmin Edge Touring GPS Garmin Edge Touring GPS is a first-class bit of kit. It will never replace maps, but it does make things very much easier. However, there is one caveat: the battery can very occasionally empty itself from full in four or five hours. My touring days usually involve about six or seven hours of actual riding, so the possibility of only getting four or five hours can be rather concerning. Mind you, most of the time the battery is happy to keep chugging along for as much as 10 hours. The worry comes from not knowing when those low battery days are going to pop up, so you find yourself regularly checking at the battery capacity indicator on the screen.

When I first got the unit, it seemed that I used about 10 per cent of available power every hour. Now it seems more like 15 per cent. This may be due to the age of the battery because frequent recharging of lithium-ion batteries will reduce their ability to regain full capacity. Garmin won’t replace your batteries, but they will swap your unit for a reconditioned one with new batteries if they are within the two-year warranty period. After that, it will cost an eye-watering £85. Not surprisingly, some owners have learned how to replace the batteries themselves. Others have had it done by mobile phone repair specialists for very much less.

Of course, there is a lot the user can do to get optimum results. Garmin says the best way is to keep the screen brightness low. It is screen lighting apparently that soaks up the power. Perhaps the best solution is to use the ‘Battery Save’ mode, which will lower the drain considerably. Doing that turns your screen off while still carrying on all the normal functions. Mind you, it does record data with a little less frequency, so accuracy might suffer a little but not enough for me to personally worry about.

Importantly, as you approach a turn, the screen will automatically light up, giving you the information it normally would with a fully lit screen. And should you want to read your screen at any time for a reassuring glance, you only have to give the screen a tap and it will reactivate itself for a minute or so.

Using the Battery Save mode does work well. On a recent out-and-back 50km ride, I used 60 per cent of my battery going out, but on the return journey I used less than 10 per cent with Battery Save activated. At that rate, I can count on more than seven hours of battery power.

There are other ways to minimise the risk of running out. Nevertheless, the battery is still going to need charging at some point. The most obvious is to plug it in when you are at your hotel. But, if you are a cycle tourist who prefers to camp instead of using hotels, then it is possible that overnight charging opportunities might be more limited. Garmin seemed to recognise the need because they introduced the optional Garmin Charge Power Pack (£119.99, from Garmin), which they claim can provide an additional 24 hours of battery power – and it is entirely compatible with almost all of their GPS units, including the Edge Explore.

It seemed an ingenious solution to the charging question when I first read about it. According to the adverts, you fasten the GPS unit to the top of what Garmin calls its Flush Out Front Mount (£29, from Garmin) which attaches to the handlebars. You then attach the Charge Power Pack to the underside of the mount immediately beneath the GPS. Connectors in the mount allow the power to flow directly from the Power Pack to the GPS. Brilliant, I thought, so I ordered one.

But sadly, it’s not brilliant. First of all, unlike many other Garmin GPS units, the Edge Explore GPS isn’t directly compatible, in spite of what Garmin says. To hook it up to the Power Pack, you need to buy a special connector cable (£22.99, from Garmin), which plugs into both units. That is a concern because fully exposed as the cable is, rain will eventually corrode the connections. Secondly, if you use a traditional handlebar bag, and turned down handlebars, there might not be sufficient space for the mount between the bag and the handlebars.

It was all rather disappointing. So what is the solution to the vexed question of using a wonderful GPS that might negate its value by running out of juice before its job is completed?

Simple, purchase a small power pack available from almost any electrical supplier (I paid about £15 for mine) and keep it in a ziplock bag in your bar bag with a £4 USB cable. Should the Garmin run low on power while under way, plug it into the power pack in the bar bag using the USB cable. If it is raining at the time, you can always take both the power pack and the bag with you for a quick charge when you go into a restaurant for lunch. Easier still, you might be able to simply plug the Garmin (and even possibly the power pack) into a wall socket in the restaurant. A proper lunch in a French restaurant should give you enough time to get another two hours or so of battery either on the power pack or the GPS – or both if you can find another plug.

Simple and cheap - a proper cycle touring-style solution. And it justifies a first class lunch to boot!