Electric bike use is on the rise – we are hearing from more and more readers bringing their e-bikes to France, or hiring them while here. Richard Peace reviews some of the latest e-bikes on the market. 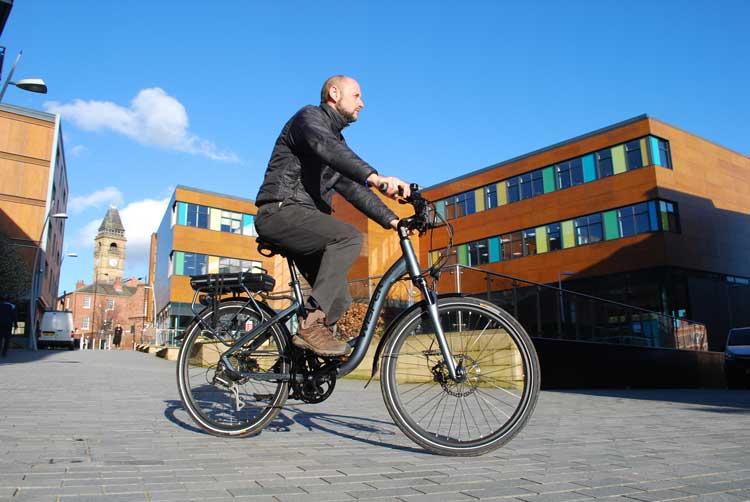 I’ve been testing a handful of the latest e-bikes recently and thought a little summary of all the models I’ve tried so far might be useful if you are considering touring on an e-bike in France.

Fully equipped for touring with pannier rack (though note oversize tubes on it so check with Whisper as to exact diameter and whether they will fit your panniers), mudguards, lights and kickstand and at a decent price for such a fully equipped bike. There is also the option of a sizeable 575Wh battery and of course big batteries are always a good idea for long days in the saddle, possibly with a full load on board.

A good option for less demanding terrain, as the very quiet rear hub motor is geared to provide a compromise between hill climbing and assistance at top cruising speed. Also one of the few e-bikes to feature the extra assistance of a throttle when pedalling (the bike can be used as a normal pedelec to power forward on pedalling, using a torque sensor, or it can be powered by the throttle, though you still need to be turning the pedals for the motor to kick in). In practice, as you don’t need much pressure at all on the pedals to power the bike forward, the throttle option (activated with a switch) can be useful for those who have a weak pedalling action through illness or injury.

There aren’t that many ‘hybrid’ electric bikes out there with the Bosch’s top of the range Performance Line CX motor system (most feature the rather more sedate Active Line version), so the Kathmandu Hybrid is certainly a standout in this respect and for those wanting to combine leisure riding with performance and steep gradients and / or heavy loaded touring this is a stylish and very well-specced option. The frame-integrated pannier rack is a nice touch and there are three frame designs, including a step-through model, which is again slightly unusual for a full-on performance touring machine. 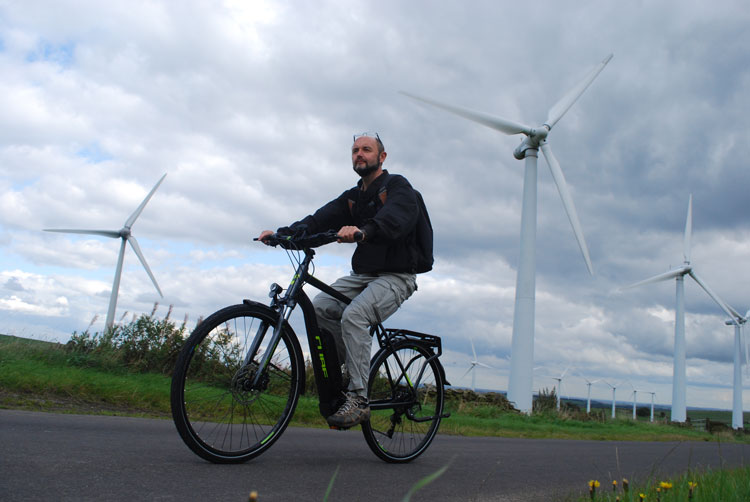 The only real con as far as touring goes is the lack of a dual battery system as some other manufacturers have (of course you can always buy an extra battery for touring).

R&M bikes are a step up in build strength and comfort compared to most other e-bikes out there (and price it has to be said too…). The huge Schwalbe Moto-X tyres mean these bikes can roll quickly on tarmac but are also very much at home on the roughest of canal towpaths and forest roads (though a step down from full-on e-mtbs). 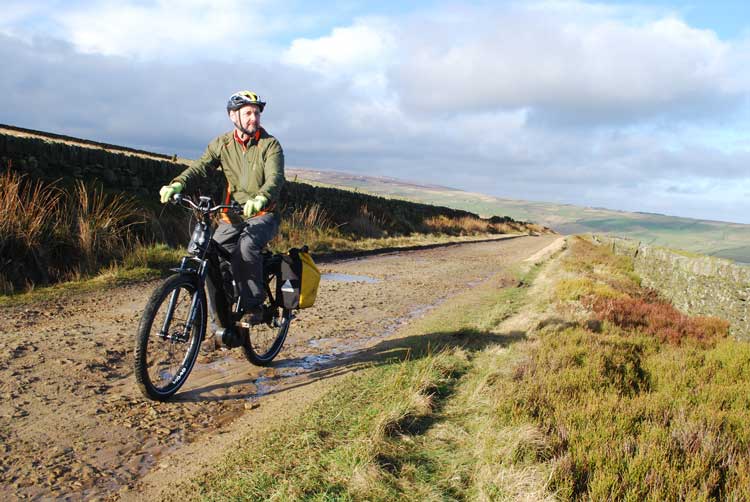 The New Charger is fully equipped for touring right down to a frame mounting lock and features the excellent Bosch Performance Line CX motor and Nuvinci hub gears which are stepless hub gears (you use a twist grip to select any gear ratio you like). Whilst Nuvinci hubs are great for ease of use they do tend to take extra charge out of battery as they less efficient than derailleur or hub gears. However, R&M do most models with a wide choice of gear options, including the highly-regarded Rohloff hub gear which looks ideal for long hard tours. Also available on the New Charger range is the option to fit and use simultaneously two batteries. The New Charger model was the ‘extra strong’ variant and can take a combined rider and pannier load of a staggering 160kg!

R&M are the Range Rover equivalent of the e-bike world, made for stately and comfortable progress but also with real ability to tackle all sorts of terrain. Test riding highly recommended!

E-MTBs can make good ‘rough stuff’ touring machines and motor can be a godsend in terrain where the extra effort of being off-road, going uphill and carrying touring gear would otherwise mean all but the super-fittest will resort to dismounting.

Many e-MTBs don’t make pannier rack fitting easy as extra mounting clips may be needed. One appealing opportunity is to look at something like the T2 singlewheel trailer we review here.

If you want what claims to be the most powerful hill climbing and best performing motor out there this e-mtb is worth a look as it features the Yamaha PW-X motor with software tuned by Giant themselves (and so branded the Sync Drive Pro). 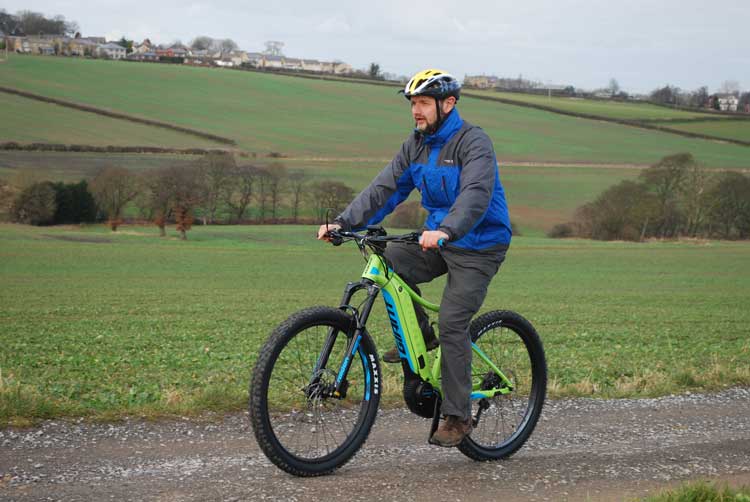 It has the ability to more easily fit a rear pannier rack and a front mudguard plus eyelets for a kickstand; all plus points if you want to adapt it for touring.

RRP £2895
There was lots and lots to like about this very adaptable e-MTB – find out more here.

Using the Brose crank motor, this e-MTB is most notable for its very quiet operation – quieter than most other crank drive motors by some distance and barely noticeable when riding. The frame-integrated battery keeps the weight nice and low down and the overall weight of the bike is pretty decent for an e-MTB with a 500Wh battery. 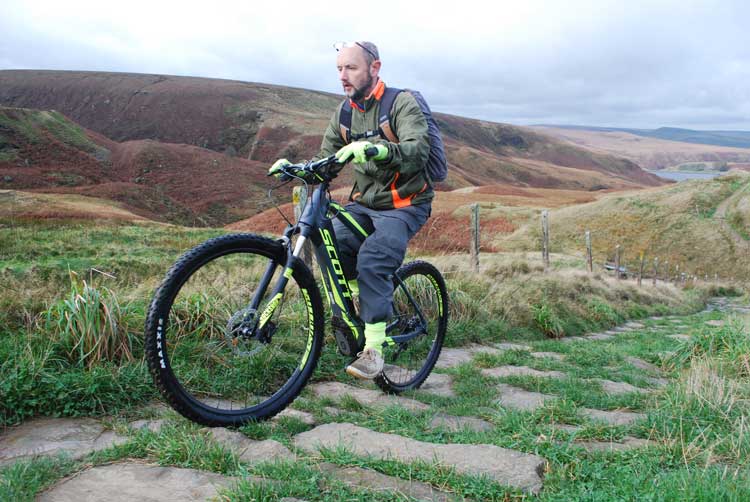 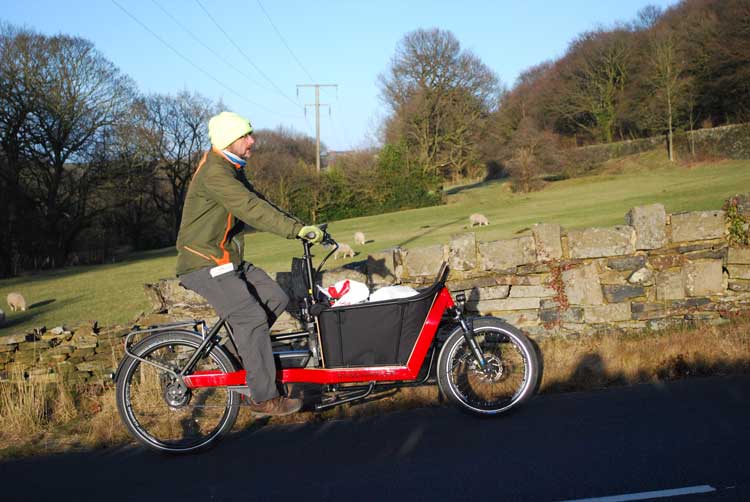 Possibly my favourite of all the e-bikes tested so far this year. Whilst you might think of e-cargo bikes as quite specialist, compact models like this are easier to ride and manoeuvre and bring the genre within the realms of the everyday practical for many riders. And whilst you might imagine e-cargo bikes are only for daily chores like the big shop or the school run, I think compact models like this bring them within the realms of being a bike for daily use, and even with potential touring use if you have the 1000Wh dual battery use option. I just loved the ease of being able to throw all your gear in the front box and have easy access to it.

RRP from £3599
Full review to follow, but check out the full range here.