The south of France is among the most popular leisure cycling areas in the world. Bob Zeller reviews Cycling Southern France, a guidebook by Richard Peace. 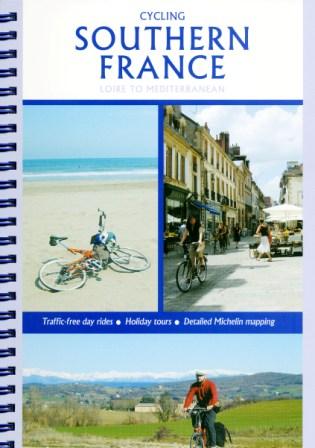 NOTE ON THIS REVIEW
In the interests of transparency, I just want to point out that while Richard Peace, the author of the book being reviewed, is a contributor to FWF, Bob Zeller is an independent reviewer and cycling journalist with no ties to Richard or his work. Lyn @FWF.

Bob writes: I can’t imagine how anyone could read Cycling Southern France without wanting to instantly start planning a tour in that wonderful region – a region that almost seems to be designed for cycle touring. Just a glance at Richard Peace’s first-class book will have your head spinning with wonderful thoughts about touring in the Camargue, the Auvergne, the Pyrenees or any one of a number of gorgeous French cycling areas.

Peace is an experienced cycle touring writer and publisher. He has 20 books to his credit, including a similar volume to this one, Cycling Northern France, and he is a frequent contributor to Freewheeling France, as well as to other cycling websites and magazines.

First published in 2008, Cycling Southern France was reprinted and extensively updated last year –and that’s very much a plus because the French authorities have been enormously busy designing new off-road voies vertes and light traffic véloroutes – and there are still more to come. Fortunately, Peace provides links and contacts so that the reader can get up-to-the-minute advice.

Even if by necessity some details weren’t available at the time of publishing, Cycling Southern France is chock-a-block with suggestions. It puts before you such a cornucopia of ideas, most of which involve using the véloroutes and voies vertes. Furthermore, it provides information and ideas for all levels of ability and experience.

If you are a family new to cycle touring and wondering how to plan a tour (or even just day rides) that will be exciting for all but won’t overtax the ability and enthusiasm of everyone, you’ll find it here. If you are a long-term touring cyclist, the book will be equally of value because it doesn’t just focus on the most popular cycling areas but many that are off the less experienced tourist's radar.

Want to challenge yourself with some climbing? Well, there are routes that will do just that. Prefer to stick to the flat? The information is there as well. And, most importantly, whether you’re a newbie or a well-travelled cyclist who's new to France, the six-page introduction contains everything you need to know about traffic rules and regulations, weather, how to get there, using French trains to get about and so many other items that will make your tour even better and easier to arrange.

In many ways, this book is similar in style to the Northern France book. Michelin map reprints are used to give overviews, while each route is shown in more detail alongside the actual route description. Day rides that can be used in conjunction with the main ride are often provided and there are considerable comments and suggestions about interesting places and the like to visit and see in that area. And, most helpfully, links are provided that will take the reader to lots of area-specific detail.

In other words, this book has been exceptionally well thought out. The information is first class. It’s easy to find it and if you want more, the links will take you to it.

Two things to note. If you are familiar with Cycling Northern France, the Southern edition doesn’t come with a separate large and weatherproof sheet of route maps like the Northern one, but then, most tourists would want to have maps that show more than just the actual route anyhow. Books and published cycle routes –and even GPS routes – always work best when used with proper, full-size regional maps. And speaking of GPS routes, Peace reminds his readers that many of his featured routes are available as GPS downloads from the Freewheeling France website.

And lastly, remember that France is actively adding more cycling routes and improving existing ones, especially when it comes to the surfaces on the voies vertes. As Peace points out, often these greenways are hard-packed soil or gravel and can be affected by heavy rain. Thus you should look for his advice about the suitability for the type of bike (and tyres) that you will be using.

OUR REVIEWER
Bob Zeller, a now-retired UK-based Canadian journalist, spent much of his professional life covering major European and North American professional cycle racing for the (Toronto) Globe & Mail, Canadian Broadcasting Corporation, Winning Magazine and others. His beat included the spring and autumn Classics, the Tour de France and world championships. While he has enjoyed just about all types of cycling – sportives, audax and just riding his bike to the shops – it's touring that he has always loved the most. And it's touring in France that he enjoys the most.