I checked out the Campanile Bordeaux Centre Gare Saint-Jean (yes, that's a mouthful). Here's what I found.

I first discovered the Campanile chain of hotels in France when I saw the Astana team bus parked outside the Bergerac Campanile during the 2014 Tour de France. At that point, I figured that if it was good enough for Alberto, then it was probably good enough for me too.

The first Campanile I stayed at was the Bordeaux airport one in Merignac and, to be frank, the review you are reading now might very well have been written for that hotel. While across the chain some hotels in the portfolio are older than others, the newer, more modern ones are almost carbon copies. Which could be disheartening and soul-destroying in that chain hotel kind of way if the hotels themselves weren't so good: reliable, clean, friendly, modern.

This one has a baggage store that can take a few bikes, plus there's private parking underneath for larger numbers of bikes. (Incidentally, the one mentioned above near the airport also takes bikes).

The only gripe I'd have with Campanile Bordeaux Centre Gare Saint-Jean would be the breakfast. It's nice, don't get me wrong: plenty of variety, with fruits and yoghurts, muesli, hard-boiled eggs and pastries to choose from. However it's a ghastly €10 add-on to the room price. Many hotels across France charge extra for breakfast, but €10? Seriously, I'd need to scoff down a lot of raspberry yoghurt and shove two days' worth of clementines into my pannier to get my money's worth on top of my coffee and freshly squeezed orange juice (great range of tea, too, but €10!?!) Still, nice crepes ... 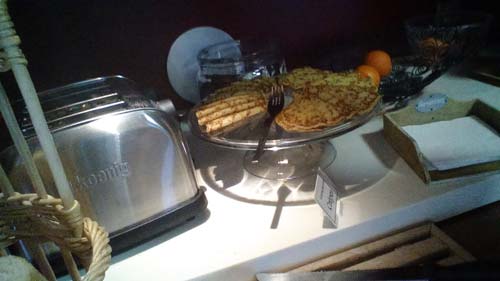 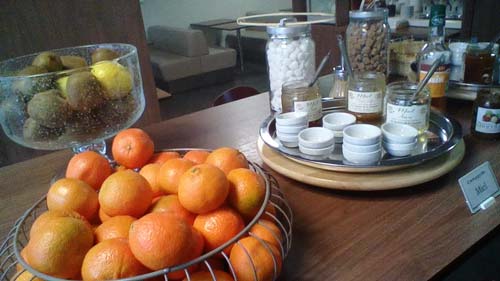 1) Location. The hotel is only a few hundred metres from the train station, but it's down the 'quiet' end of the railway preccinct, far enough away from the station's bars and restaurants to not be bothered about staying in what can be one of the city's less salubrious neighbourhoods.

2) Clean, clean, clean. The hotel is new (it opened in 2015) and my room was spotless – I couldn't quite smell the paint but you get the idea. 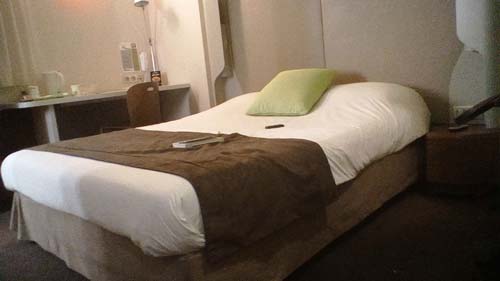 3) Shower. It's hard to underestimate the importance of a good shower when you've been cycling all day, or when you arrive late at night from the train. My shower was a spacious walk-in Italian job, and the shower gel provided didn't smell like househod detergent like shower gels in chain hotels invariably do (Campanile is in fact a 'green' hotel and uses organic products and enviromentally sustainable practices throughout its hotels). In addition, the rest of the bathroom was spotless in that you-could-eat-off-the-toilet-seat-but-why-would-you-want-to? kind of way. 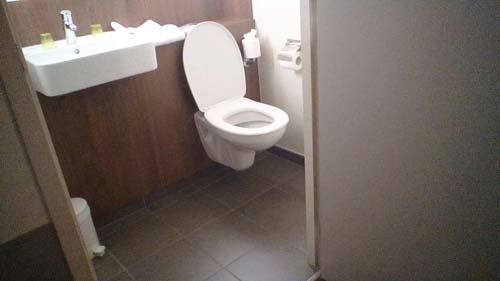 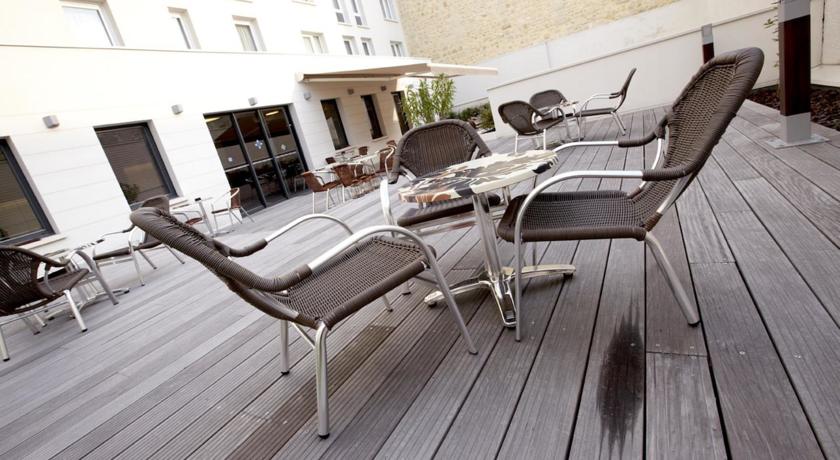 4) Terrace. There's a nice outdoor terrace, which is a lovely place to relax after breakfast or to catch up on email (the hotel has free wifi through Orange) or to plan your next day's route. Outside space isn't something all city centre hotels can boast, so it was a nice surprise to find it here.

5) Price and value for money. For me this is the clincher (even with the extortionate breakfast). I paid €65 (€75 wth the extortionate breakfast) for a Friday night in the middle of the French school holidays. That's not bad for a 3-star mid-range city hotel. The only other city hotels cheaper were ones that had reviews on TripAdvisor that said things like 'worst hotel I've ever stayed in' and 'wouldn't wish this on my grandmother's worst enemy'. In comparison, my room was a pretty safe bet.

More hotel and B&B reviews for your France cycling holidays