Is it possible to purchase a decent electric bike for £1000? Richard Peace reviews the Calibre Kinetic electric mountain bike to find out. 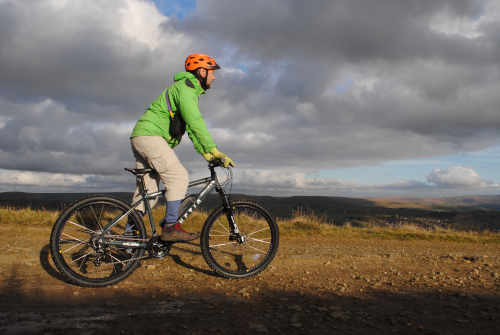 Calibre Kinetic electric mountain bike
£1300 or £1000 with a Go Outdoors discount card, which costs £5 per year.
Also available at Blacks and Millets for £1100.

The Calibre brand is best known for all the followers it’s garnered with the launch of a sub-£1000 full-suspension (non-electric) mountain bike back in 2015, the Bossnut, so all eyes are expectantly on their first venture into the e-bike market.

The £1000 price tag has to be one of the most eye-catching things about this model. Mainstream offerings at this price are rare – especially e-MTBs that promise more than being the most cheaply put together machines possible. Does the Kinetic deliver at such an attractive price tag?

What do you get for your money?

The 6061 alloy frame is based on Calibre’s non-electric Two Cubed excellent value-for-money MTB, with a similar long wheelbase and low slung, easy handling geometry. It looks well made and has plenty of sensible design features such as mounting points for a rear rack and kickstand, a seatpost that drops all the way into the frame to accommodate smaller riders and plenty of clearance for wider tyres too.

At this price many components are going to be basic; there is a 3x8 Tourney/Acera gear setup, Suntour sprung front suspension and Clarks hydraulic disc brakes. The package is completed with good size alloy platform pedals, nice wide handlebars for close control off-road and adequate looking Kenda knobblies. 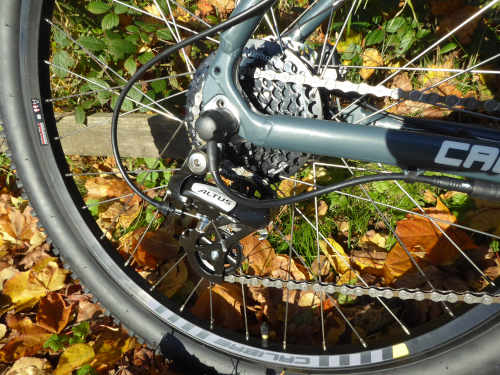 OK, you may not get the more refined ride offered with more upmarket kit, but it’s all perfectly good, functional choices from recognised names. Together with the frame flexibility detailed above it means this would easily double as a commuting bike kitted out with rack, mudguards, kickstand and lights which are all easily added on.

Whilst they may be a little more under the radar than the big names in budget e-bike drive systems like Bafang, Promovec are a Danish firm with a track record in supplying electric assist systems to brands as varied as cargo bike specialist Christiania and more mass market firms like Dawes and Calibre.

The system selected for the Kinetic consists of a reasonably discreet rear hub motor, rather large-sized downtube mounted battery, the mounting system cleverly housing the controller and heat sink too, and finally there’s a very simple LED light display by your left thumb with on/off, power level and walk assist controls. The latter simply indicates whether the system is on or off and which of the five power levels you are on. It can also act as a diagnostic system in the case of any fault. 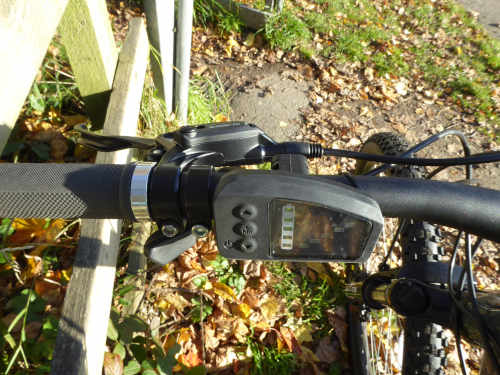 The 317Wh battery is relatively small in capacity terms by today’s standards, though quite big and bulky looking and weighed in at a slightly disappointing 2.5kg – about the same as a Shimano 504Wh battery. Still, a minor quibble at this price point. It comes with a reassuring Promovec 2 year guarantee, which states capacity will be 70% after 2 years. As this aftercare video shows, the USB port on the battery allows some quite sophisticated analysis. It also demonstrates how the system is conveniently modular, so that, for example, to remove the rear wheel it’s a pretty straightforward matter to unplug the power lead and undo the axle bolts, should you need to change an inner tube on the trail.

An interesting feature was the speed/motion sensor which nestles at the base of the left crank. This is notably smaller than usual and whilst they tend to give cruder power assist delivery you can read the largely favourable impression this particular system left in the 'Trail test' section below.

Overall the Promovec system looks neat on the bike, is well fitted with tight cable runs (the only concern being the power feed to the rear motor loops over the rear derailleur and looks a little exposed to damage). Certainly though, the sleek impression it gives is a world away from much earlier hub motor systems which featured trailing wires and clunkily large and obvious looking control boxes. Clearly hub drive systems have slimmed down and smartened up in a relatively short space of time, which is great news for those looking at budget e-bikes (or at least this one in particular).

We headed over the cobbles and stony surfaces of Lancashire’s Rooley Moor and the Calibre Kinetic held up well against a full-suspension Shimano powered e-mtb that was more than three times the price, certainly climbing at the same pace as the Shimano equipped bike on the moderately steep and not too technical ascents. A later timed hill climb test on our mile long, all uphill tarmac test course confirmed that the hill climbing power of the motor was pretty impressive and again comparable to a good quality mid drive.

Of course the ride quality on a cheaper hardtail was never going to rival its pricier full-suspension companion, with a little more seat jarring and a bit more harshness from the front, steel coil sprung SR Suntour XCM forks, even with preload set to the most forgiving setting. Yet the motor assist made for hugely enjoyable and leisurely ride. It’s perfectly adequate for trail and mountain bike riding that doesn’t encompass the hardest of of hardcore trails. 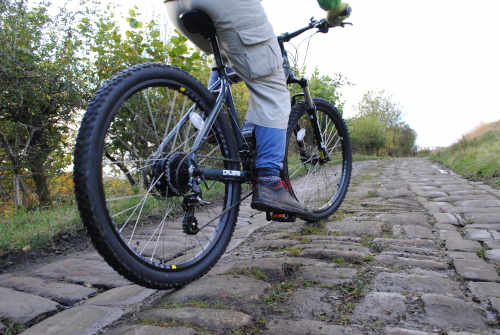 Most encouragingly, I only used around half the battery capacity on the 15-mile circuit meaning this looks like a fairly economical motor; it was a leisurely outing with plenty of photo stops, so climbing was easily accomplished for the most part in the lower gear settings and in the lower power settings. Using full power to blast up the gradients would obviously put a dent in our projected range of around 30 miles.

The speed sensor (also known as a PAS system) used on the Kinetic uses the movement of small magnets at the base of the crank to sense when you are pedalling forwards and to make the motor kick in, in accordance with your power settings that you set on the handlebar control – dial the power up or down as needed with your thumb.

This worked far better than expected; in general, the power came in smoothly and there wasn’t any significant ‘run on’ of the motor keeping powering you forward after you have stopped pedalling. If you don’t keep the pedals spinning in a low gear up steeper climbs you might find the occasional dead spot where power drops off, or moving the pedals forward inadvertently may cause unwanted acceleration, but this was very rare. Also, very steep hill starts may be a challenge as the power takes around a second or so to kick in after you start pedalling. However, overall, this one of the better motion sensing systems I’ve come across. 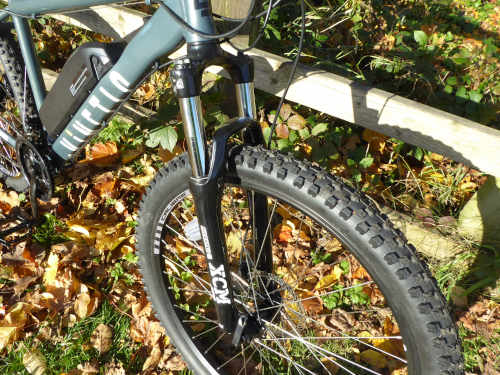 The natural competitors at this price point are the Carrera Vengeance-E from Halfords and Decathlon’s lower priced Rockrider hub motor range. Whilst the Vengeance-E, which I’ve also tried, shades it in head to head in the area of much smoother, more immediate power delivery, the Kinetic wins on outright hill-climbing power, gear range (465% vs 280%), Clarks hydraulic disc brakes over Textro mechanical ones, weight (21.2kg vs 22.6kg) and in the price/value-for-money stakes. Decathlon’s Rockrider hub motor e-MTBs are also worth a look, starting at around £900 and boasting a good sized 380Wh battery and a rear hub motor that is rated as moderately powerful on paper at 42Nm of torque – though I’ve not tried any Decathlon models, the spec sheet certainly looks encouraging.

In short, the Calibre Kinetic will accomplish much of what many much more expensive machines will and it comes backed with a good battery guarantee and backup from a nationwide retail chain whose MTB brand has great credentials.

Calibre Kinetic electric mountain bike
£1300 or £1000 with a GoOutdoors discount card, which costs £5 per year.
Also available at Blacks and Millets for £1100.

About our reviewer
Richard Peace also contributes to electricbikereport.com, which has more e-bike reviews and guides. Richard is the author of the official English-language guidebook to the Veloscenie Paris-Mont-Saint Michel bike route and the Sustrans guide to the London-Paris Avenue Verte. He also contributes to A to B magazine, Bike Europe and Eurobike Show Daily. You can see all Richard's books here.