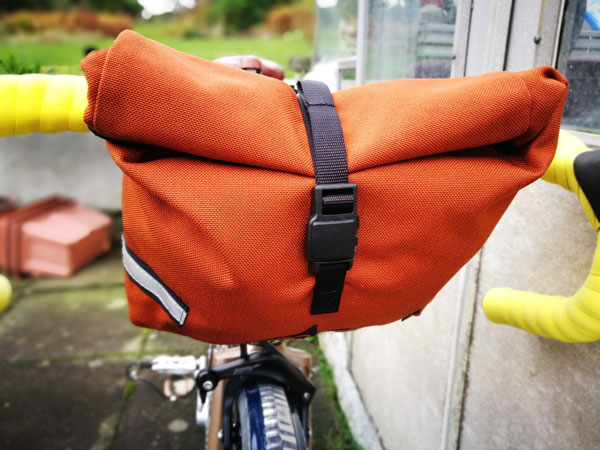 Whatever size of handlebar bag you might use when touring, there will be times when it is too big or too clumsy to use if you off the bike and walking about.

On my last tour, my friend and I stayed for an entire day in Bayeux so we could visit both the tapestries and the Bayeux Museum. Because our bikes would have to be left outside for a number of hours at each location, we opted to leave our bar bags in the hotel. To carry them for most of the day would have been a real nuisance. No matter how good the shoulder straps, a handlebar bag can be uncomfortable after a while slung over your shoulder and banging your hip with every step. 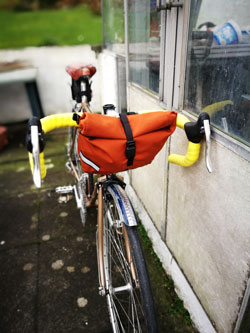 It would have been nice to have a small bag, big enough to carry souvenirs and the like, but small enough to squirrel away when not needed.

What I really needed was Arkel’s new Signature BB. With a four-litre capacity it would have carried everything I wanted all day, either fastened to the handlebars or over my shoulder. And then when we would resumed normal touring the next day, I could have packed the bag away in a corner of a pannier.

Fully waterproof and with a foldover top, it it is more or less square shaped so everything from a small camera to a sandwich jambon fromage and a bottle of wine will fit into it with ease. If I had a complaint, it’s that the magnetic closure is, to me at least, a bit fiddly – at least when I first used it.

On the other hand, attaching the bag to the handlebars is simply done using two straps with Velcro ends. But be careful because the straps aren’t sewn to the bag and could be dropped and lost. Best to keep the straps closed when the bag is not being used on the bike.

But all in all, it’s an excellent bit of kit.