Derek emailed to ask about wild camping in the Pyrenees during the Tour de France. Here's our conversation. 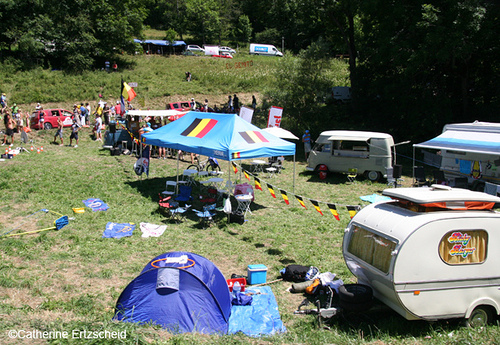 Great website! I have been getting some great information for preparing for my tour of Spain and France in July. I have done some tours in the past, so I'm OK on most things, but I have never toured in France and want to spend 3 days around area of Bagneres du Luchon to try to get to see a couple of stages of the Tour de France. My question is, if I get to one of the mountains being climbed, say Port de Bales or Tourmalet, is it OK to just camp somewhere discreet just off the route?

I am guessing that most official camp sites and accommodation will already be full. There are three stages within a fairly close distance to each other, so I'm thinking of riding between them and wild camping, but I was wondering if, given the massive numbers of people, if this is OK to do. I found a nice looking lake near Port de Bales that I fancied.

I'm sure this will be fine as many people free camp during the Tour de France (see our general guidance here about wild camping in France), but I emailed a local contact who runs a gite near Port de Bales just to double check the current local regulations.

This is what Marianne and Brian, who run Le Fournil Holiday Cottage near Port de Bales, had to say:

Thanks for asking our expertise :-)

It should be absolutely fine to camp wild, especially during the Tour week, as there will be loads of others with exactly the same idea and the authorities and locals are very relaxed about it. One thing to bear in mind is to get there early – some people will park their campervans up to a week before the Tour goes through, to secure the prime spots, especially on any of the climbs.

It probably is a good idea to choose a base central to the 3 Pyrenean stages and then cycle from there on the day to view the Tour. A lake near Port de Bales sounds good, but as I said Derek needs to be there well in advance of the Tour – the Port de Bales itself will be getting busy days before.

He should also make sure that when he sets up camp, not to obstruct any access paths to fields or meadows so that he won't upset any local farmers, and, of course, leave the site litter-free afterwards (but I guess that goes without saying).

I hope this helps – let me know if there is anything else. We'd also be happy to answer any other questions Derek might have.

Hope all is well with you too. 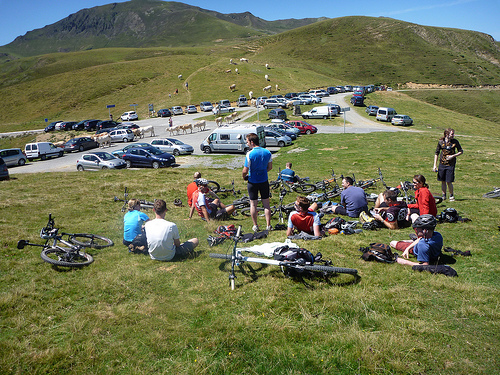 A slower peloton that usual crosses the road at the top of Port de Bales.
Photo: Simon James
Derek writes back:

Knowing that I can do this means I won't worry about finding an official campsite or a B&B, although if I find a campsite with a vacancy, I would try it. Reading Marianne and brian's advice, I think I will get there a couple of days before the stage I want to see to get sorted with a place to camp. If I can ride with my tent to see another stage, I will treat it a bonus as it's just me and my bike, so I am hoping I can fit in at a good spot.

Looking at Google map, there appears there may be a way over from Port de Bales past Refuge du Mont Ne over to Bareilles past the Lac de Bareilles, but only using a footpath – that would make it much easier than riding the long way around. Would Brian and Marianne know if that path is possible with a bike? Not worried about pushing or carrying it for a few kilometres as it looks like it would save miles and lots of climbing and enable me to get to the next day's stage easier.

Can't wait to set off in July.

That's a tough one – we hardly ever go off road with the bikes, so couldn't comment if the route he wants to take is a feasible option. It would depends what kind of bike he's got – I certainly wouldn't think it's possible with a normal road bike. Also, just looking at Google maps might be deceiving as the path he's considering might well be just a hiking path over possibly very tricky terrain; it would also depend how high up this would take him – again difficult to judge from Google maps.

Lac de Bareilles, for instance, lies at 1760m and can only be reached on foot from the village of Bareilles, which takes about 30 minutes (not sure that I would want to carry a bike that long!!!) His best bet would be to try and get himself a hiking map of that area, showing elevation etc. Sorry that we cannot be of more help, but see this map for more.

Let us know if there any further questions, we'll do our best to help.

Thanks – it was just a long shot, really, think I will stick to the roads even if it's longer. I think by adding the extra day to my trip I should be OK. Booked my ticket to Girona yesterday and first time riding in France so really looking forward to it. Got to get out on my bike now to do some riding as weather here in Wales has been mostly too wet lately.
Thanks again for your help,
Derek