I'm back from a weekend in Bagnères-de-Luchon where we held our first ever mixed ability social rides weekend at the Free Range Chalet. Here's what we got up to! 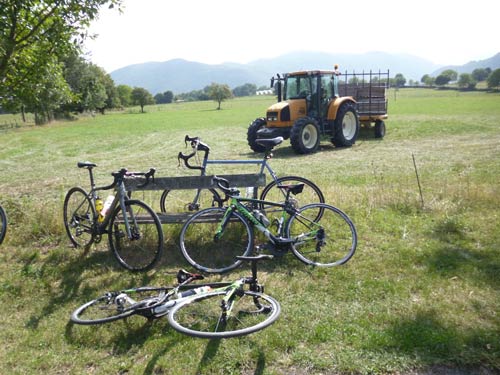 I still have a few spaces left on my ladies' weekend - full details here!

So. It happened! Our first ever social rides weekend. And it was a blast.

An idea that started as an incentive to make me get out on the bike more blossomed into a weekend of fun with a great bunch of riders (and new friends) crossing the spectrums of cycling.

We had Mick, Martin, Richard, Ness, Katherine and Darren. And me, usually bringing up the rear on climbs. We were a mixed ability group of seasoned riders, touring cyclists, new riders, and those of us in between. 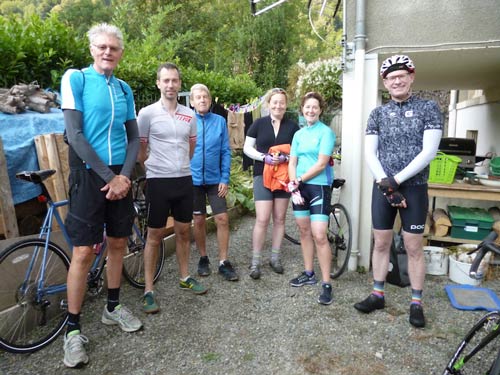 The whole point was to get out, have some fun, and meet new people. Oh and I was keen also to show off a bit of France, too, and brag about how great it is to ride here!

Geoff and Victoria at the chalet were super hosts, feeding us up and sending us fearlessly out to enjoy their little slice of the Pyrenees. We also had Christian from Luchon Cycling (a man with rainbow coloured stripes and French champion's bands around his arms) on hand with his local knowledge, his support van and his yummy chocolate energy bars.

There wasn't a road we couldn't tackle in sunshine or in rain. Here's what we got up to.

Today was an 80-odd kilometre circuit through the valley from Bagnères-de-Luchon. It was flat, save for a few uphill bits. There was even a dead pan flat voie verte (greenway route) and a moose on the back of a truck.

Really, if we're talking about a good day out on the bike, then it doesn't get much better than this. 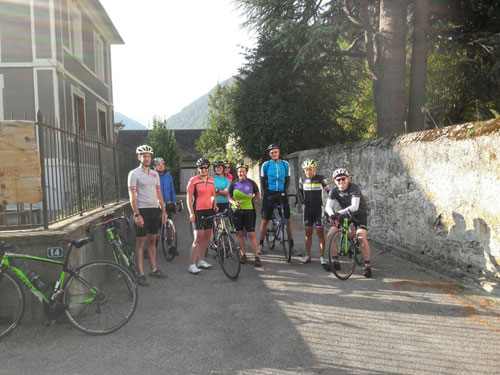 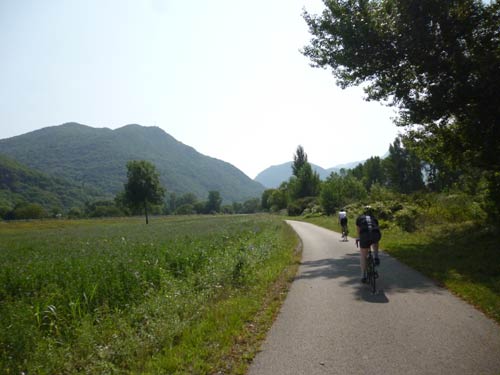 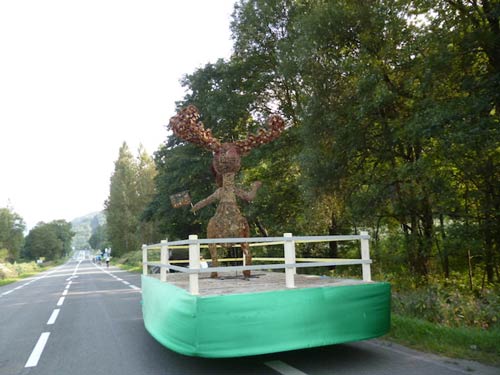 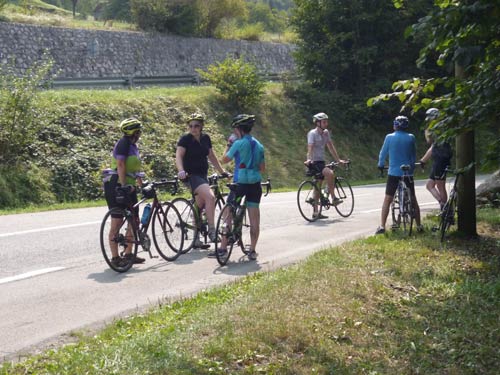 It was all quite sunny and glorious, with the only hitch coming when the first cafe stop Christian had earmarked had to be scuppered when we arrived to find some local politicians had closed down the cafe for an event. Grrr.

With plan B instigated, we maxed out on caffeine and treats from a boulangerie before pottering back to the village. All except Darren, who had enough left in his legs to somehow tag the Col de Peyresourde (1569m) onto his 80km.

Ness, Martin and I managed a few more kilometres to this lovely little suspension bridge at the foot of Superbagnères. 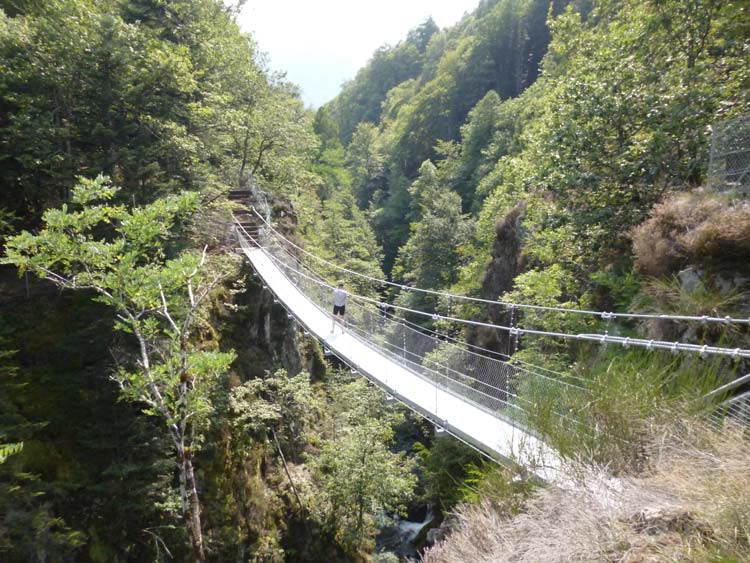 It's at the end of a lovely little forest walk just off the main road.

That night we dined on Victoria's home-cooked feast and plotted day 2, warily watching the weather close in outside.

Despite Geoff's best assurances that the weather might clear (he was obviously using the wrong app...), we woke to clouds and rain. But we'd come all this way and we were going to ride.

And ride we did – at least until it got too miserable. So we ditched the idea of climbing the Col des Ares (8.4km at an average of 3.3%) in favour of a lazy lunch in town.

Richard and Martin did what seemed to be the most sensible thing at the time: they headed to the spa.

Then the weather cleared (a bit).

Darren rode off towards the Spanish border and the imposing Col du Portillon. Martin, Ness, Katherine and I pondered an afternoon ride and somehow convinced ourselves that having a go at Superbagnères was a reasonable idea.

It was clearly an outrageous idea, and one that didn't merit me taking my gloves or jacket as I figured we'd make it as far as the bit where the road starts to go up and turn back.

So it was that at 3pm we pedalled out of town and towards the clouds.

And that's how this happened, accidentally and by surprise.

Ness, thankfully, was a little farther back, and always just within my sights. I used her little outline against the mountain ahead to keep going, setting myself small goals of getting to where I'd last seen her bum on her bike.

The numbers on my Garmin slowly, slowly got bigger. Five kilometres turned into six, six into 6.1 and then 6.2, slowly snaking up towards 14 or 15, when I actually believed for the first time that we'd make it all the way. But it was a long haul. At one point the thing actually autopaused because I was going so slowly. But I kept going; I knew if I stopped completely, I'd never get going again.

Around 17km and more than 2 hours later, we were seeing these: the final hairpin bends at the top of the climb. 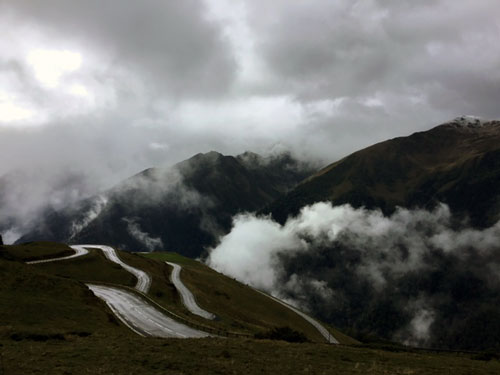 Finally Ness' bum disappeared over the top and these signs came into view. It was euphoric. And I said a lot of bad words when I finally made it to the top. I was very excited...

I may have come in 2741th out of 2774 people on Strava, but I didn't care. I was an hors-catégorie climber. If I can get to the top of that thing, just about anyone can.

(Selfie to follow when I get a copy from Katherine – my camera and phone had by this point both died). 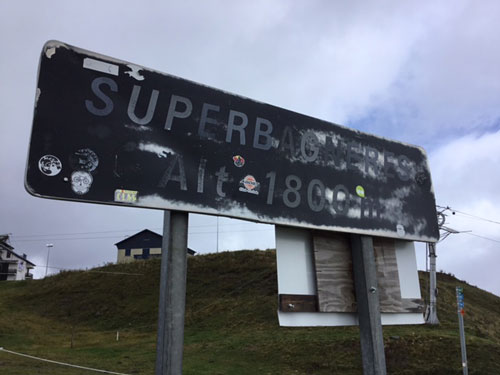 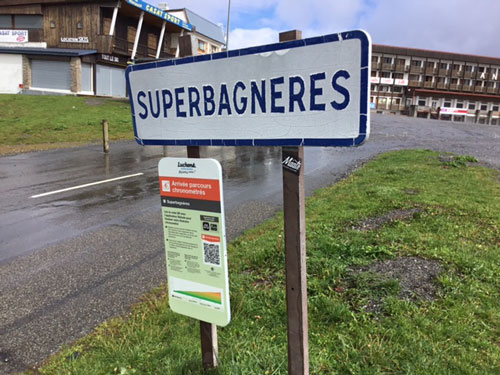 It was cold and it was windy and it was closing in on 5.30pm. Our fingertips were frozen. My kneecaps were shaking up and down uncontrollably; I was starting to question the sanity of it all, and how the hell we'd get back down that steep descent (in the rain) before losing our faculties.

It was our first ever 'big' climb. The only thing that mattered was making it to the top; I really didn't care how I got down, as long as it was in one piece. I'd never been so cold in my life.

So we applied common sense and called for Geoff and the Free Range Chalet rescue van.

And then we started the descent, hoping Geoff would get our message and meet us on the way down. And he did. We bundled into the van and headed back to the chalet to defrost our toes in front of the wood burner and spend an age in hot showers.

Later we shared war stories over another scrumptious dinner and heard about Darren's climb to the top of the Portillon. He had modestly managed two TDF climbs in two days, their combined times faster than my one way route to the top of the Superbagneres. It was quite awe-inspiring – and exactly what we'd hoped the weekend would be: cyclists sharing rides and having fun.

I'm going to try and organise another mixed ability social weekend in the northern spring - drop me an email at lyn@freewheelingfrance.com if you'd like to be kept posted about dates. Also see here for my women's ride in October.

Routes in the Pyrenees