It's now legal to 'jump red lights' at some intersections in Paris following an extensive study into road safety in the French capital.

Paris has made international headlines by making it legal for cyclists to ride through red lights at some intersections in the city.

The move follows a comprehensive study (see Mark Cramer's) into bicycle safety that forms part of the city's efforts to improve traffic flow, ease congestion and boost cycling across the capital.

Under the new rules, special bicycle 'give way' signs will be placed at key intersections underneath the traffic lights. Cyclists will be able to turn right or proceed straight head on a red light if the bike signs gives them permission. If no cycling sign exists, normal road rules apply.

The graphic above from the Paris mayor's office shows how it works.

Paris officials say their studies have shown it's safer for cyclists to be able to ride through some intersections on red, and that it also helps traffic flow.

Under the rule, cyclists must still exercise caution and give way to othe road users, including pedestrians.

Similar studies are under way in other French cities, including Bordeaux, which since 2013 has been testing the same rules across a selection of intersections in both the city and the suburbs. The same 'give way' sign system is expected to be formally rolled out across more than 450 intersections in Bordeaux later this year.

Lyon is operating the same system having trialled it at 47 junctions since 2012. It will be expanded to eventually cover more than 700 intersections across the city.

Parisian Mark Cramer sent me this first-hand report that illustrates how well researched the new red light law was among Paris' cycling community.

About three years ago on a congested street near Gare Saint-Lazare, I made a right turn on a red light and got stopped by two cops, a woman and a man.

As they motioned for me to approach them, I prepared my legal defence, things like, “you never stop motorcycles that barge into bike lanes, much more dangerous than what I just did.”

“Please don’t worry, sir,” the woman assured me. “We’re only doing a survey.”

In fact, they explained, the City of Paris, was trying to gather the opinions of cyclists, especially commuters, in order to improve cycling conditions, facilitate the traffic flow, and get people to do more non-polluting purposeful bike commutes.

One of the questions was, “Do you ever turn right on red?” I answered a truthful “yes”.

“Thanks for leaving your name and phone number. You may be contacted by City Hall.” 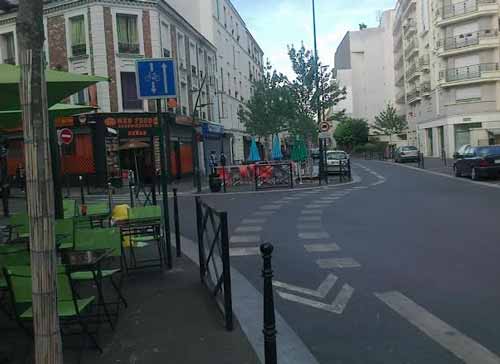 This photo is one example of Paris' "complete street" strategy spreading to the neighbouring suburbs, like here in Clichy. It's a one-way street (previously two lanes), reduced to one lane, with more pedestrian area plus a bike lane that allows cycling against the traffic. Photo: Mark Cramer.

In fact, City Hall did call me. The interview started out mechanically: probably a young man doing an internship. But he diligently took down my suggestions, including that the municipality should make it legal for cyclists to use their discretion about turning right on a red light.

I also mentioned the logic of passing through a red light at a T junction when there is a footpath to my right instead of a through street. And I completed my list with a yes for le double-sens cyclable, where cyclists can go against the traffic flow on a one-way street, designated as a low-speed street.

Mine was only one small voice among thousands to urge the municipality to enact these three reforms. I also attended meetings on urban mobility in Clichy, a near-suburb of Paris just across the Périphérique, still within the Paris Metro system and part of the grand scheme of municipal cycling. I found many other cyclists at these meetings and realised that we now constituted a critical mass.

These folks referred to themselves as citoyens non pollutants (non-polluting citizens).

Through on red at a T-junction!

And le double sens cyclable against the traffic on one-way streets!

I get this feeling that the bicycle can be an instrument of organic democracy.

See here for more on how Paris became a bike-friendly city.

More on cycling in Paris: