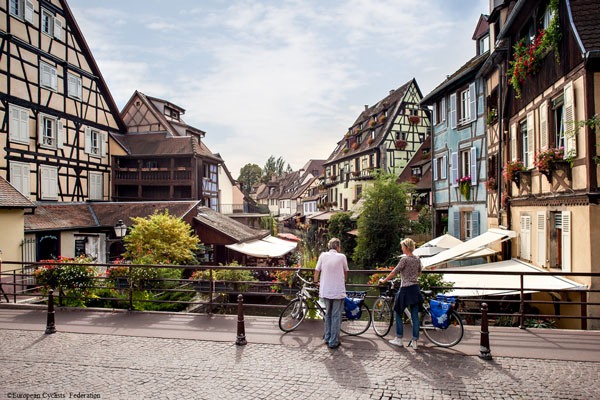 The first ever EuroVelo Cycle Tourism Awards were held in the ITB Berlin in Germany on March 9 – and it's fair to say France scooped the pool.

France won Most Popular Cycle Tourism Country, while the EuroVelo 15 (Rhine Cycle Route) which passes through France, claimed the prize for the Most Popular EuroVelo Route in 2017.

Adam Bodor, the EuroVelo and advocacy director, at the European Cyclists' Federation (ECF) said the awards were to recognise proactive approaches to cycle tourism in Europe.

"The two award winners – France and EuroVelo 15 (Rhine Cycle Route) – are setting the standard for developing successful cycle tourism products on the European level and we hope that other countries and routes will follow their lead," he said.

National and ECF figures show cycle tourism is making up an increasingly significant portion of the European tourism industry.

According to a study commissioned by the European Parliament, cycle tourism contributes over €44 billion to the European economy annually in addition to the environmental, health and transportation benefits is brings.

France – consistently rated as one of the most popular tourism destinations in the world – has been a leader in the development of cycle tourism over the past decade.

The EuroVelo 15 (Rhine Cycle Route) is an excellent axample of this progress. More than 10 years in development, it is now one of the flagship cycle routes in Europe, and attracts riders from all over the world.

In total, eight EuroVelo routescross France, with more than 8,000km of sign-posted routes. By 2030, it is hoped there will be 22,870km of signposted national cycle network routes.

The country has focused its bike routes around its strengths – culture, nature, history, wine, coastlines and waterways – and has ensured that the bicycle is just another way of seeing the best of the country and reaching all key tourist hotspots.

Bike routes link the Eiffel Tower to Mont St Michel, they follow the D-Day beaches, the Atlantic Coast with Vélodyssée (EuroVelo 1), the vines and castles of the Loire à Vélo (EuroVelo 6), and the canals of the Midi and Garonne. And loads more – as you can see on our site.

But it's the EuroVelo routes – coordinated by the National EuroVelo coordination centre for France, the Départements & Régions Cyclables – that form the backbone of the network, with regional and local routes linking in to the European network to ensure it's posisble to navigate your way across France entirely by bike.