When the battlefields of France fell silent

A poignant and beautiful post about a little known WW1 memorial not far from the Trans-Ardennes Voie Verte. By Ian Weightman 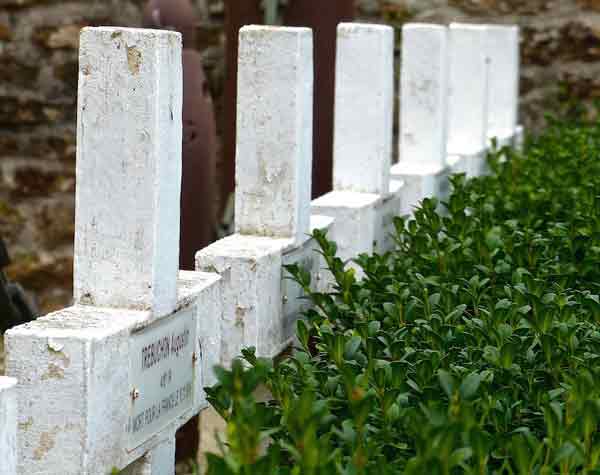 Augustin Joseph Louis Victorin Trébuchon was born on May 30, 1878, in Malzieu-Forain Lozère, in France.

He was the eldest son in a family of six children, whose parents were 35-year-old farmer Jean-Baptiste Trébuchon and Rosalie a 32-year-old housewife.

Before the outbreak of the war, Augustin was a “pastre” (a communal shepherd) in Saint-Privat-du-Fau. Often seen with his his trusty accordion, he also hosted the popular dances of the region

He became the breadwinner for the family when both of his parents died and – as such – was eligible to be exempted from army service. He nevertheless enlisted on August 4, 1914, and went on to fight in Marne, Verdun, Artois and the Somme.

Wounded twice, he became a Private First Class, and received a citation on October 23, 1917 as: “A good soldier who always accomplished his duty, and was wounded twice during the campaign.” He then received the order of the 73rd Brigade for being: “A soldier of remarkable calm – giving his young comrades the best example of a brilliant attitude in fighting between July 15 and 18, 1918”.

Unmarried, he was courting the daughter of Liconesse Hortense Brown, and returned home on leave in 1917, saying that he was not keen to return to the front.

But why – out of all of the French soldiers caught up in the First World War – should we remember his name?

Partly, because he was involved in an offensive on November 11, 1918, which resulted in him being hit in the head by a German bullet. But mostly because he was the last French soldier to be killed in action during the four-year conflict – falling less than 15 minutes before his friend and solider-in-arms Octave Delalucque had the honour of sounding his bugle in the French Ardennes to mark the end of hostilities.

Trébuchon arrived in the Ardennes, together with the 700 men in his regiment, on November 8, 1918. At this stage of the war, the Germans were in a slow retreat following their failed August offensive, but were still doggedly defending positions from the French.

Fifteen minutes before the ceasefire scheduled for the 11th hour on the 11th month, Trébuchon – as liaison to the 415th RI – ran to the front edge of Meuse at Charles Wood with a message in his hand which read “Rassemblement à 11h 30 pour le ravitaillement” (“Muster at 11.30 for food”). He died before it was delivered.

The last of the 91 French soldiers to die that day, Trébuchon’s war grave in the village of Vrigne-Meuse in the French Ardennes still records (incorrectly) that he was killed on November 10, 1918.

Optimists believe the reason for this discrepancy in the date of his death was because that by stating that these men had died well before the end of the war, their families would be guaranteed a war pension. Realists, however, believe that the government wanted to avoid any political scandal if it ever became known that so many soldiers had died so pointlessly on the last day of the conflict.

Officially, there were no French casualties on the last day of the war. If you visit the churchyard, you will notice that Augustin Trébuchon and his comrades are all still recorded as having been killed the day before.

As a result, the soldiers in this battle, including Trébuchon, were simply forgotten after the end of the war; and it wasn’t until 82 years later, in 2000, that events of that day were seen in a different light. Alain Fauveau sets the record straight in his book Le vagabond de la Grande Guerre, souvenirs de la guerre 1914-1918, where he describes it as “la bataille de trop” ("a useless battle").

The tiny village of Vrigne-Meuse finally honoured the last French soldier to fall in the First World War on November 11, 2008, with the inauguration of “Rue Augustin Trébuchon”. The French Ministry of Defence duly corrected the place of death, but it has yet to correct the date on Augustin Trébuchon’s death certificate, or gravestone, even though it is now known that he died so close to the ceasefire, on November 11.

Today, Vrigne-Meuse still stands between Charleville-Mézières and Sedan near the Meuse river and the Trans-Ardennes bike path. Vrigne Meuse is on the other bank of the river to the cycle path. There is easy access to Vrigne-Meuse via a bridge at Donchery. From there, it's just 3.6km to Vrigne-Meuse.

On entering the village, there is a right turn onto the Chemin de Mézières when the road starts to climb uphill to what was known as the Signal de l’Epine Cote 249 (Hill 249).

Here, a stark monument marks the last battle fought by the French Army on the last day of the war. It pays homage to the entire Division – despite the fact that most of the heavy fighting was carried out by the one regiment: 415e RI, after whom the main street in the village is named.

It is followed by a quote from the French writer Jean Cocteau: “Le vrai tombeau des morts c’est le coeur des vivants” (“The real tomb of the dead is in the hearts of the living”).

You can find out more about cycling the Ardennes region here.

A full description of the Trans-Ardennes Voie Verte is here.

Accommodation in the area