Paris is one of cycling's success stories – for such a huge city, it has much to offer in terms of cycling. But Paris wasn't always so bicycle friendly. In this guest blog, cycling campaigner Audrey de Nazelle recalls how the campaign for change in Paris started. Paris hasn't always been so bicycle friendly. Photo: Jon Worth

The man changed my life. I can trace the steps that led me to this desk overlooking the sea in Barcelona. If today I'm writing scientific programs and papers on environmental health and delivering them from Paris to Pasadena, it all started with a clean-cut thirtyish man in uniform. The anger, the outrage spent - but not wasted - on him!

On the morning of December 5, 1992, I unlocked my bike from the railing on Bvd St Germain, and took off as usual for university, only to be stopped 10 metres later for running a red light intended solely for pedestrians. There were no pedestrians, no cars in sight – it wasn't even an intersection. The policeman was standing behind the signal. I'd seen him, of course. I was moving slowly, and I was an easy catch. At first I thought it was a joke and protested mildly. I was soon joined by curious, then appalled passers-by as the officer proceeded, unperturbed, to write me out a ticket. Bikes have helped give Paris back to the people. Photo: Mlle Bé

For weeks I prepared the arguments for my court appearance, proving the injustice of punishing a cyclist. Paris was a congested, polluted city. The bicycle was a clean transportation alternative that opened up the city to its beautiful vistas: graceful, noiseless, harmful to no one and convivial. Those were the days when to come upon another bike was an event. We waved and smiled and might even stop to chat; we were the happy few who had realised bikes were faster, funner, nicer than the 20th century city car monsters. We were The Future and we deserved medals, not fines.

So it was with pounding heart that I sped toward my first rendez-vous at the Bastille after finding a little note left on the handlebar announcing a "Bike Protest".

And from the Bastille we rode together, a full 30 bicycles strong, onward to the Vélorution! I was to feel that throb every first Saturday of the month for the following years, en route to the emblematic square (in fact a circle). As a demonstration organiser, each month I applied for a permit, plotting parade routes from the Bastille hub. We donned costumes, covered our bikes with flowers, sang songs, chanted chants, tooted horns, unfurled banners and generally spread joy – at least among Saturday shoppers on foot, who smiled and cheered. Motorists, slowed to a halt by our official police escort, were another story.

We were not just a group of friends having a good time. We, the Young Greens (whom I officially joined after a year), had a goal, a political thought and discourse, and we were determined to give the bicycle an accepted place on the roads of Paris and in people's minds. Not only a means to clean up the air in Paris and encourage conviviality, the bike was the symbol of a better way of life, respectful of others and of oneself.

Returning Paris to the people

Naturally bicycle lanes were a first step in our program, and we campaigned for bike stands everywhere and safe parking spaces in all new buildings. But the ultimate goal was urban renewal, lifestyle changes – giving the streets back to the people, providing parks and places for them to gather – and, of course, extending public transportation. We were adamant about imagining "une politique autrement" - another kind of politics. We wanted to LIVE what we preached, to HAVE FUN, to ENJOY our activist battles.

Meanwhile, I was working toward my Bachelor of Sciences in pure mathematics, followed by the Master's degree. After class every day I would bike through the city pursuing cyclists to hand them flyers and convince them to join the next rally. And I hosted a weekly radio show on green politics: music, interviews and announcements. We arranged public meetings and organised press conferences (once actually putting the journalists on bikes to give them first-hand experience of the splendors and miseries of pedalling in Paris).

The demonstrations grew to hundreds, then thousands of participants. One big monthly party! Babies in baskets, kids, students, nuns, musicians, grandparents, welders, painters – all culminating one glorious June afternoon in I996 in a 6000-bicycle ride (plus rollers) paralleling the Seine.

That was the year we were invited to take part in the Mayor's first Commission on Bicycles. Young Greens (and other bike movement associations) can definitely take credit for laying groundwork. But if truth be told, this first step in municipal bicycle policy also came thanks to another grand French tradition. The December I995 general strike paralysed public transportation for almost a month, and people were desperate to get to work. The bicycle (in many cases dragged out of sheds and basements where they'd been rusting since World War II) became hero of the day, centre of conversations and newscasts.

Quickly metamorphosed from activist and rabble rouser, I became a technician in the commission, working with town engineers and planners to devise the first 150 kilometres of Paris bike lanes.

Of course years of persistent goading remained before Paris became the bicycle-friendly city it is today, attracting world attention for its practically free bike network. Vélib' was instituted thanks to the newly-elected Mayor Delanoë and my Green Party friend Denis Baupin, now an elected official in charge of transportation. Vélib' has been one of the world's most successful public bike hire schemes. Photo: Susan S

I was no longer in town to help, having followed love to North Carolina. The time was also ripe for me to pursue my ecological passion more thoroughly. It was my mathematics professor who pointed out to me that UNC Chapel Hill had one of the two best Schools of Public Health in the US. So Prof Peskine wrote me a recommendation, and my good American mother packed in her entire scrapbook of newspaper articles about "Audrey, la Passionaria du Vélo".

Thus armed I made it into the Environmental Sciences PHD program. The day of my thesis defense (examining the risks of bicycles in cities!), a member of the jury joked: "great dissertation, but what's really remarkable is that Audrey lived 10 years in the United States without a car".

Footnote: On Bastille Day, 1995, friends all the way to Hong Kong recognized me on the back page of the International Herald Tribune, wearing my hand-painted Piste (pronounced 'peaced' and meaning" bike lanes") and 'Love' jeans and hoisting my bike in the air with revolutionary fervor. Little did they realise (and let it be a lesson to momentarily discouraged militants everywhere) that on that particular day, only I7 people showed for the rally – one of them a Reuters photographer.

Audrey has contributed to Paris: Women & Bicycles, a photographic book by Gil Garcetti that celebrates cycling culture among the women of Paris.

More on cycling in Paris

Mark Cramer has about day and overnight trips around Ile-de-France that are accessible from Paris, plus this guide to getting out of Paris by bike. See also Bruce McAleer's Cycling Fontainebleau to Milly for a lovely dayride outside of Paris and these top 5 rides in Paris. We also have an overview of the London-Paris Avenue Verte bike route. 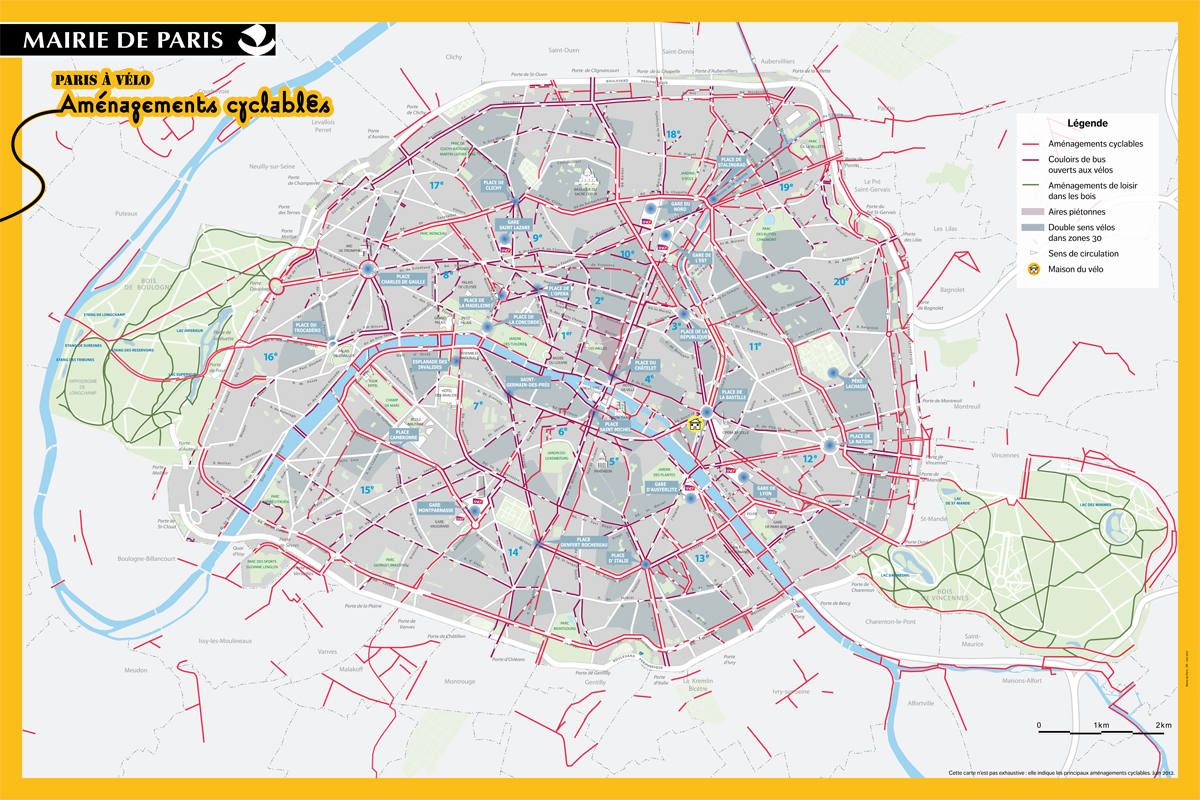 Pistes cyclable in Paris – the official map of bike routes in Paris. Click to enlarge and drag to your desktop.

A free Paris à Vélo map (above), published by the Mairie de Paris, is available at all tourist information centres. It can be downloaded in an even larger format here. There is also an online database of all Vélib' stations. A free bike-path contour map, the Carte des pistes cyclables en Ile-de-France, is available at most Tourism Offices in the region and can also be ordered and/or downloaded here. See also the Ile-de-France map number 514; there is also an equivalent IGN map.

Zoom in to click the icons on our map below for bike-friendly accommodation options with either safe and secure in-room parking permitted or dedicated bike storage on site.