Cycling in Paris in the post-COVID world

The perfect storm is brewing for cycling in Paris, with the coronavirus and concerns over air pollution combining to boost cycle commuting. Mark Cramer reports. 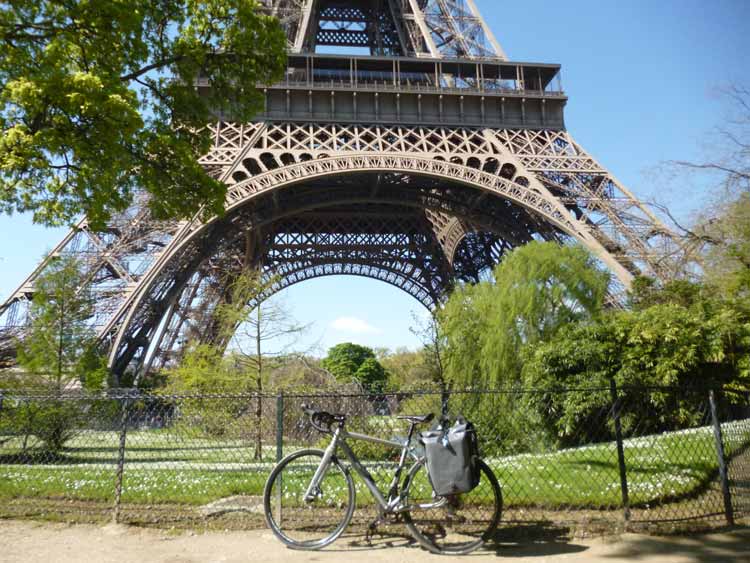 More on cycling in Paris

For 20 years, Paris has been trying to become another Amsterdam or Copenhagen, with pro-cycling mayor Bertrand Delanoe and his successor Anne Hidalgo informally “recruiting” bicycle commuters to the front lines in their war against congestion and air pollution.

The municipality implanted a motley array of bike paths – some protected, others just painted on the road (and often blocked by delivery trucks), some sharing bus-taxi corridors, and yet others poorly embedded in shared footpaths so risky that city engineers retreated, adding signs: “Cyclists: Cede Priority to Pedestrians”, as with Avenue Magenta.

In recent years, Hidalgo has become less haphazard and more aggressive in expanding truly protected bikeways, including a move to ban cars.

Even before the coronavirus pandemic led to pop-up bike streets, the municipality had worked diligently, with regional cooperation, to establish all-important bike-travel connectivity. Paris is a magnet for visitors and workers from a much larger region, and there is recognition that most car exhaust pollution comes from outside the city. 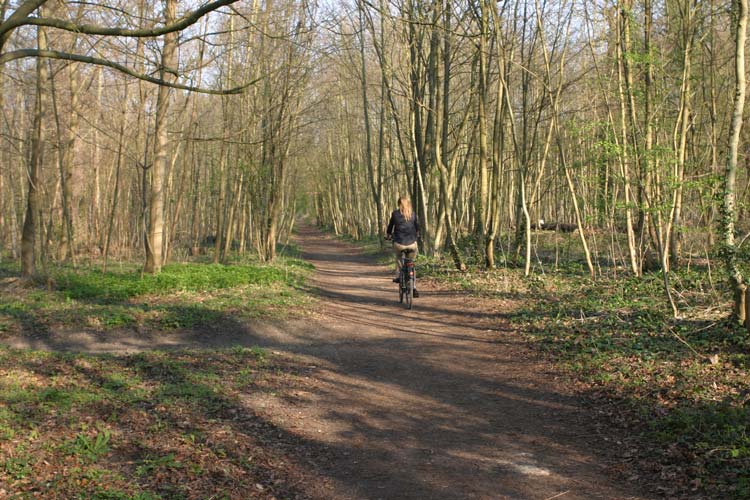 Today, you can cycle between the east suburban Marne River city of Chelles and the west suburb of Suresnes via 35 kilometres of dedicated bikeways, skirting both the Marne and Seine rivers and crossing the Vincennes and Boulogne forests. Its core is the central-Paris Rue de Rivoli axis, a two-way cycle route inaugurated in 2018.

During a pre-pandemic trip over this route, I swished by congestion on Rue de Rivoli, wondering if stymied drivers would think, “Hey that guy’s lucky!”, or blame me for their misery.

Between 2017 and 2019, various other major protected lanes were added or enhanced, including Boulevard Voltaire (République to Nation) and Avenue Flandre, part of a continuous north-south axis. Had such improvements existed 10 years earlier, I wouldn’t have been doored 5 times in bizarre incidents for which I rightfully pleaded “not guilty” but can’t plead “not stupid”. (See Old Man on a Green Bike: Chronicles of a Self-Serving Environmentalist (UK, US, Fr).

Since the COVID-19 pandemic, Paris and neighbouring cities have made cycling even more attractive, not only for commuters but for touring, nurturing Hidalgo’s project of making Paris a magnet for bicycle tourism.

Credit must be given to many regional bicycle activist organisations such as MDB (Mieux se Déplacer à Bicyclette), the one I belong to. Their yearly 'Convergences' involving some 4000 cyclists serve to prod local authorities into escalating bike amenities. 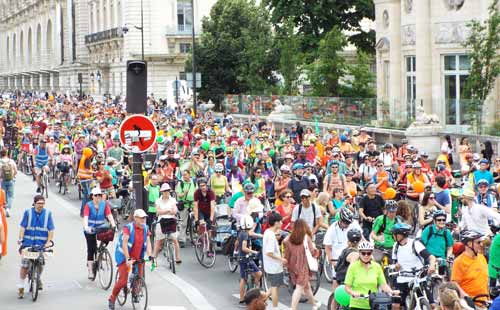 Since the pandemic, cities in the region added more “double-sens cyclables” (two-way cycle lanes), which allow cyclists to go against one-way traffic on 30 km/hr streets (pictured below). 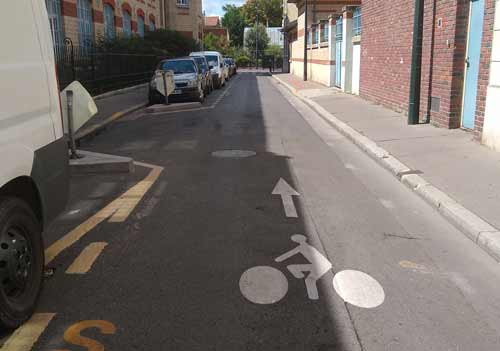 I recently tested these “double-sens” on a 10km 'against-the-traffic' tour. None of the car drivers coming head on showed any belligerence when one of us (usually me) had to move over for the other.

With traffic engineers tallying bicycle traffic, I use these “double-sens” roads as often as possible, hoping they’ll be made permanent.

Another temporary pop-up enhancement has been the convertion of existing bus-bike-taxi corridors for the exclusive use of cyclists (example below). 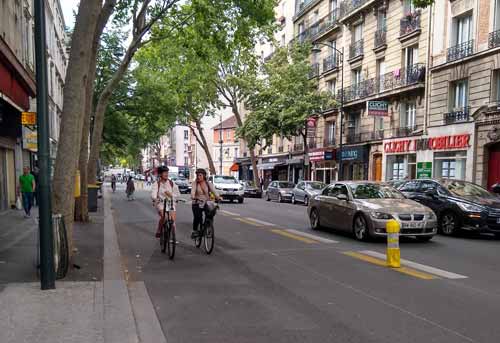 This strategy integrates bike ridership with public transit. With social distancing so difficult on the Metro and on buses, the idea has been to get users of public transportation to switch to their bikes, freeing up space on public transport for people who can't cycle.

"As the lockdown ends, we need bicycles to fully take their place as transportation solutions,” Environment Minister Elisabeth Borne said back on May 5, when Hidalgo  and deputy mayor Christophe Najdovski were converting 50 kilometres of car lanes into bikeways.

The expansion of bike space through 2018 happened to precede the huge transportation strike of 2019, providing a cycling alternative for thwarted transit users. In one year, Paris bicycle use rose by 54%. An average of 225,000 daily bike commutes was tallied.

The larger Plan Vélo sought to raise the bicycle modal share from 5% to 15% by 2020. Though bike usage continues rising, the next batch of statistics will not show Paris anywhere near the 15% – but that’s not necessarily bad news.

Constraining bike usage is the compactness of Paris, where 60.5% of trips are made on foot. Public transit is so efficient that another 27.3% of trips involve transit. Paris cannot be Amsterdam because it’s too small: just 9.5km north-south and 18km east-west.

Regional solutions for touring and commuting

Much local car traffic streams in from suburbs. The needed increase in bike ridership must involve blended bike-train transport for suburbanites. Similarly, most bike tourism flows out of the city by way of major cycling itineraries, including but not limited to the Paris-Mont St Michel route, the Avenue Verte London to Paris and, more recently, the EuroVelo 3. Recent pop-up bike lanes eliminate obstacles for the Grand Escape.

This pop-up bike lane across a once-dangerous outer Seine bridge morphs into a 95% dedicated bike route between Paris and the Saint-Germain-en-Laye castle, almost 30 kilometres away. 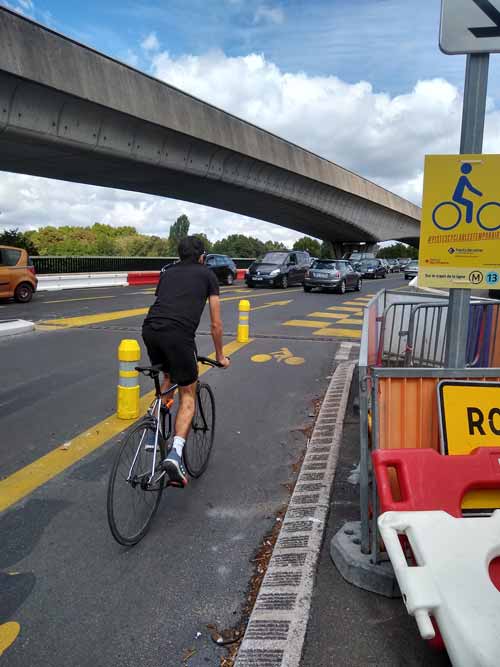 In 2018 I attended a working group at the Paris Hotel de Ville (City Hall) on the potential for free public transport. I learned that public transport is so heavily subsidised that the user only pays 22% of the ticket cost. Bicycle advocates opposed free public transport because it would discourage bike commuting and all the health benefits that comes with it, further congesting transit lines.

Along with blended train/bike transportation from suburbs, Metro users should have incentives to switch to cycling. When my wife and I were commuting to the same Paris office, I would take the bike and she’d use the Metro. Invariably, I arrived before her. With today’s safer bike lanes, she would have had the confidence to accompany me.

Even if we get rid of COVID-19, congestion in public transit can propagate other illnesses. Commuters who switch from train to bike receive a double health benefit: not being exposed to potential flu carriers and getting a very practical form of exercise. The best way for Paris to meet its 15% bicycle modal share is to decongest the public transit system, a winning strategy for both cyclists and train users.

About the author: Mark Cramer is the author of Old Man on a Green Bike: Chronicles of a Self-Serving Environmentalist (UK, US, Fr), a humorous and insightful exploration of bicycle touring and commuting.