We are cycling the entire route of the new La Vélo Francette from La Rochelle to Caen – here's our bike route from Domfront to Pont-d'Ouilly. 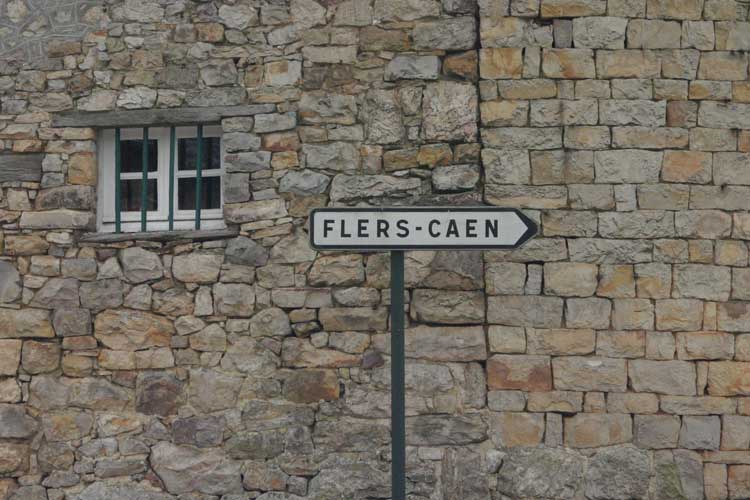 Well we've made it to the Orne department; tomorrow is the home stretch to Caen in Calvados (both are in Lower Normandy). Here's how we got on today. 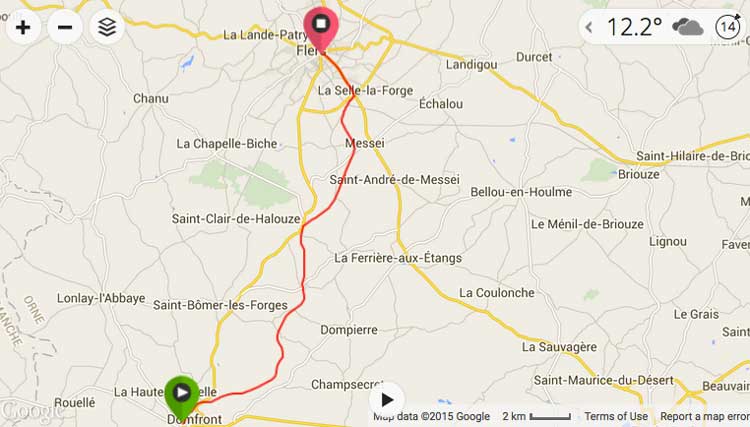 We'd stayed at La Maison 1833 just short of Domfront and east of the actual La Velo Francette route. Instead of taking a considerable detour to get to the voie verte (on La Velo Francette) for Domfront, we took D-roads straight in. We were already late leaving, having taken full advantage of Katherine and Christophe's hospitality (a special hello to their beautiful little girl). 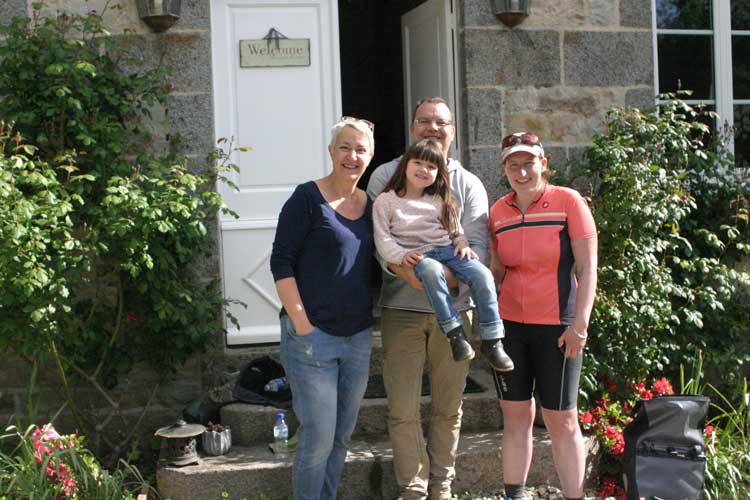 The guys have just opened the B&B (which also offers evening meals) and we were their third guests. They sent us on our way after a wholesome breakfast of pancakes, fresh berries, muesli, and eggs (plus a little box of treats for a mid-ride sugar hit).

We had a quick potter around Domfront – Katherine had told us not to miss the church, and we found out why. 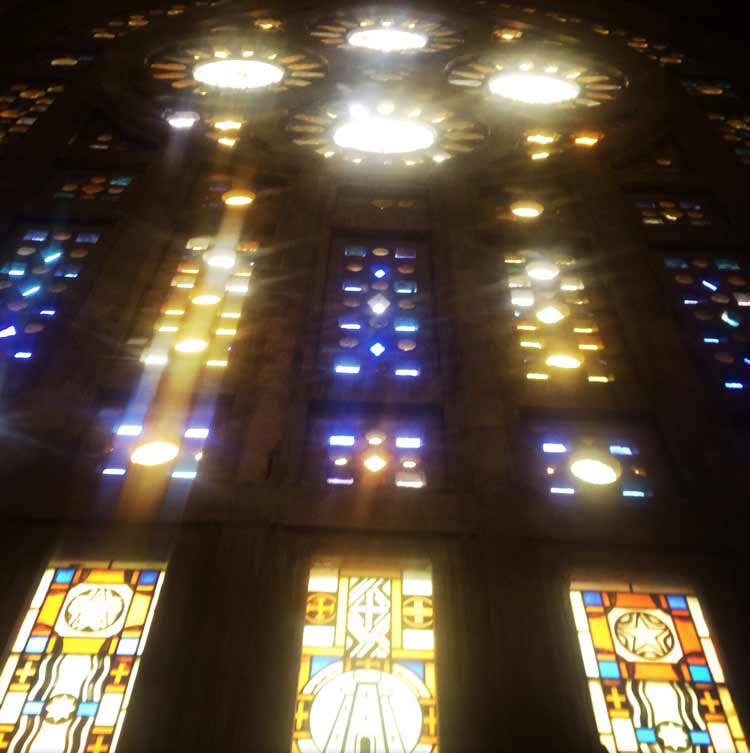 Eglise Saint-Julien is a bewildering piece of modern architecture and art, having been constructed in the 20th century largely of reinforced concrete. Inside it has a Byzantine-esque feel, complete with dome-shaped ceiling and beautiful mosaics. 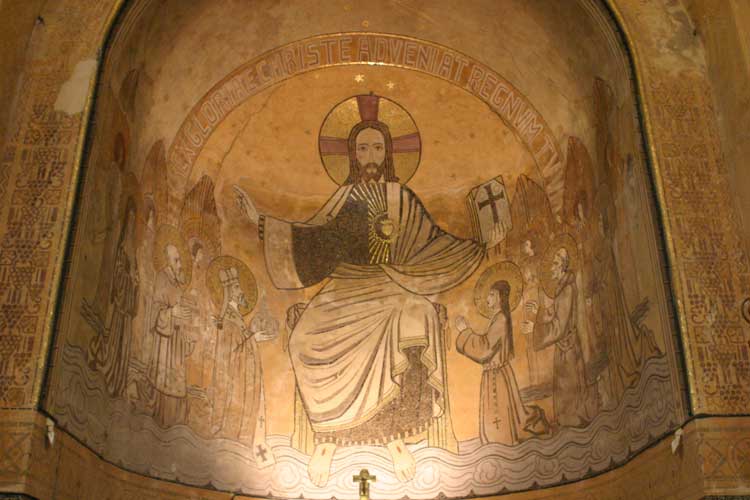 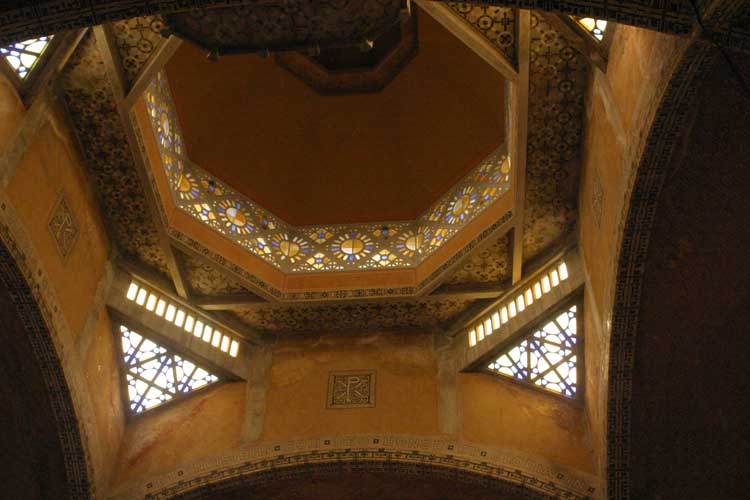 For fans of historic churches, there's also the Notre-Dame-sur-l'eau on the riverbank; it dates back to the turn of the 12th century. It was a place of pilgrimage for such illustrious names as Eleanor of Aquitaine and Richard the Lionheart, and has been wonderfully preserved with its frescoes in tact.

Also save time for the ruins of the 11th century Norman castle, which affords stunning views across the valley. 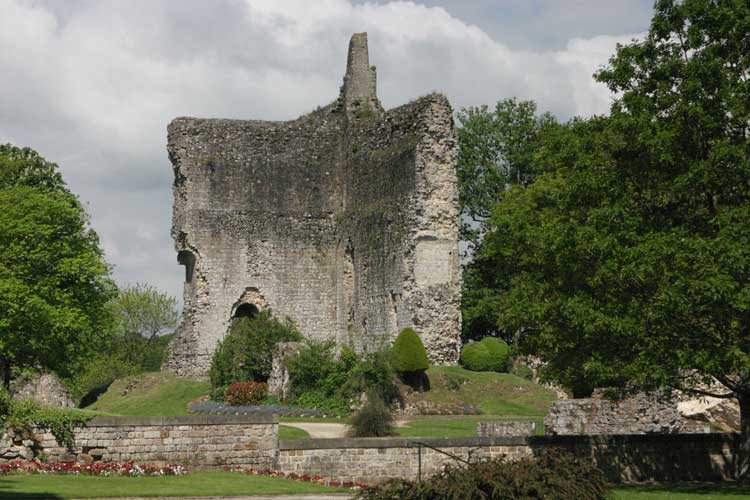 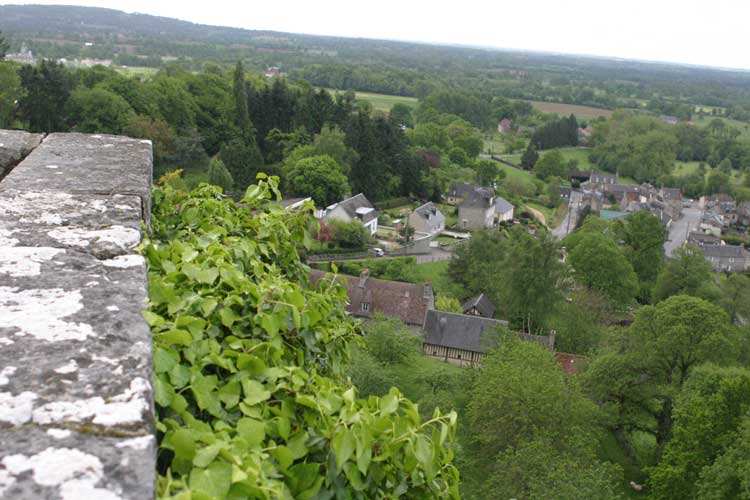 Domfront is becoming something of a crossroads for cyclists, being the junction of the Veloscenie London to Paris route and the new La Velo Francette. It's an ideal base because it's a nice size (not to big to navigate through if starting/ending a ride there), and accessible directly from the voie verte (greenway) which runs from south of Domfront through to Flers (all of it falling on La Velo Francette).

The town still has considerable work to do, though, to make it bike-friendly. For example, unlike other towns we've been through on this trip, there wasn't a single signpost guiding riders from the city centre to the bike route below (the town sits on a hill that was strategically important in Norman times – be warned!) That said, it's home to several bike-friendly hotels and B&Bs, and the tourist office is friendly and informative, and the town was hosting a mountainbike festival when we visited; it even had the artwork to prove it. 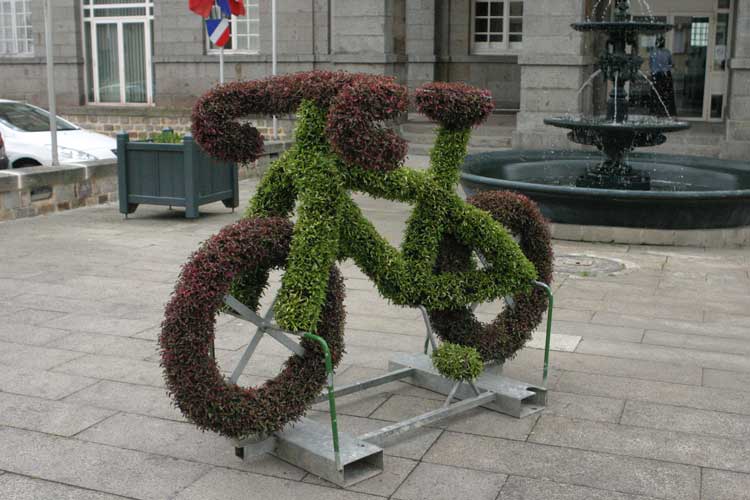 It was almost midday when we left Domfront and we were well behind schedule. We had planned to meet Gerry and Janet, regulars on the Freewheeling France Facebook page, on the Domfront to Flers voie verte but we'd already kept them waiting way too long and I'd feared we'd missed them after a text from Gerry saying it was raining where they were and that they'd be heading home.

So with skies threatening (again), Nicky and I headed north on the voie verte. 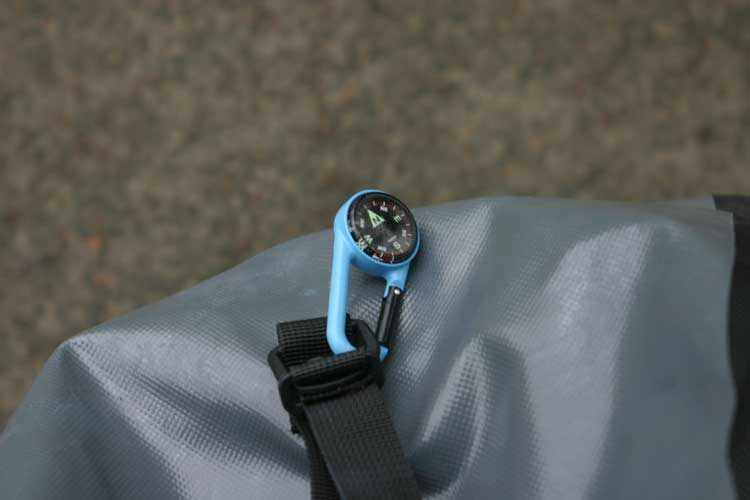 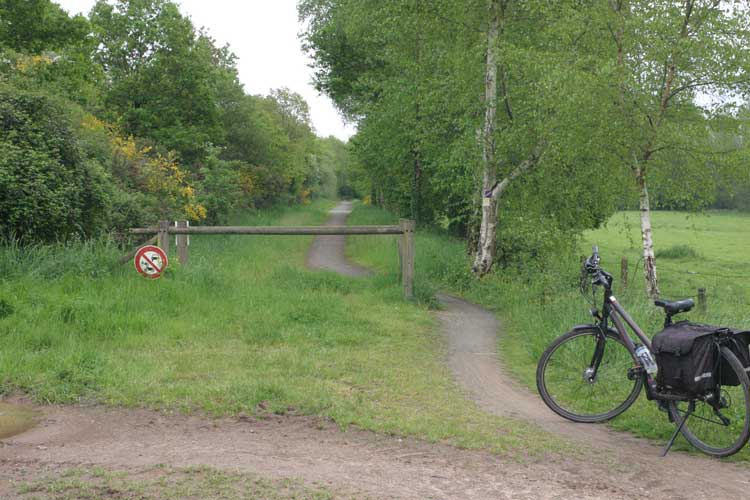 As the rain began to fall, guess who we saw ahead, their wet weather gear beacons on the path ... it was Gerry and Janet ... 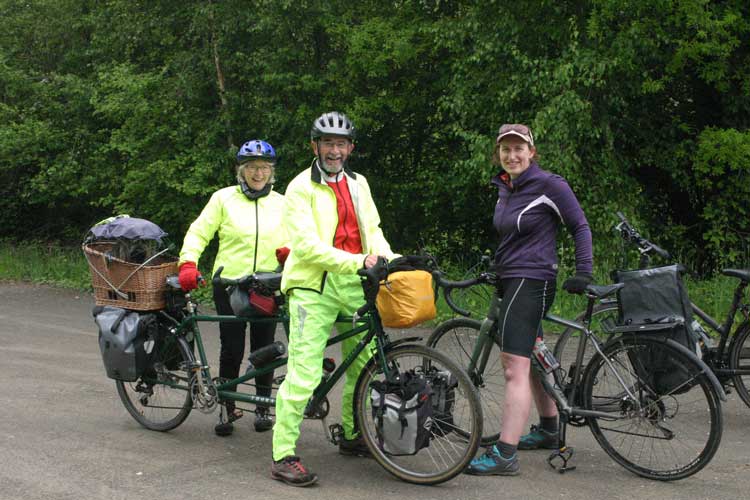 And their passenger Harris. 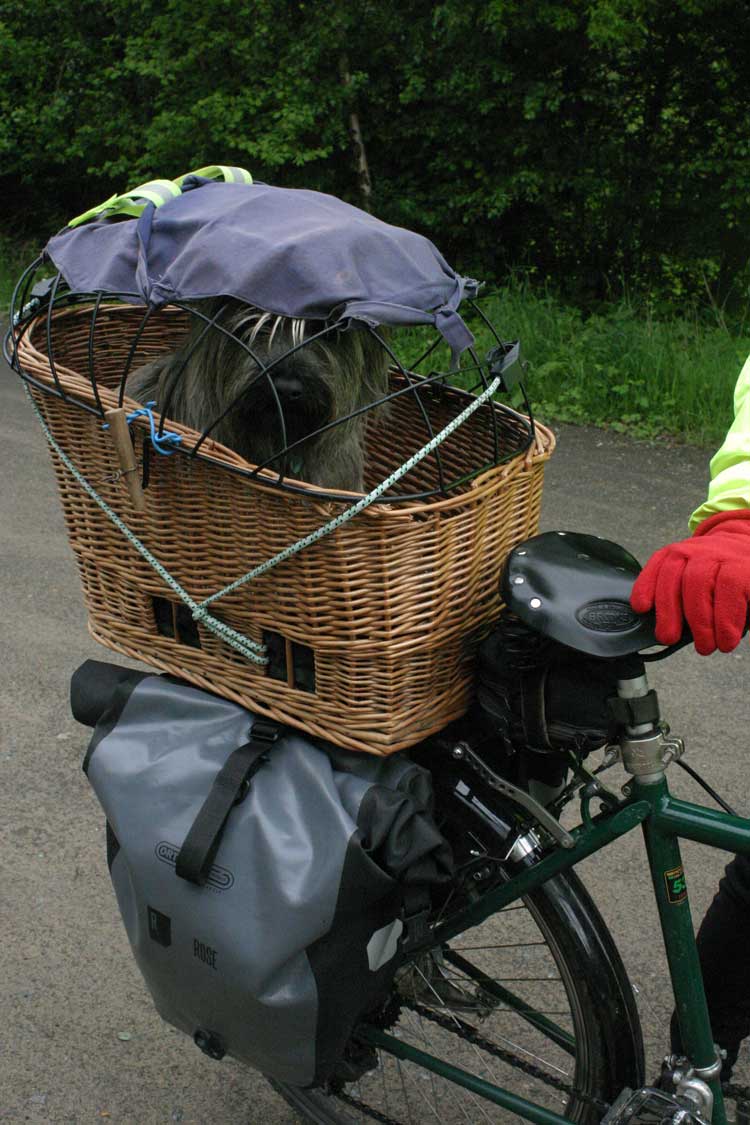 We swapped bike stories before going our own ways as the rain set in.

It was well after 3pm by the time the voie verte delivered us to Flers for what should have been a lunch stop. 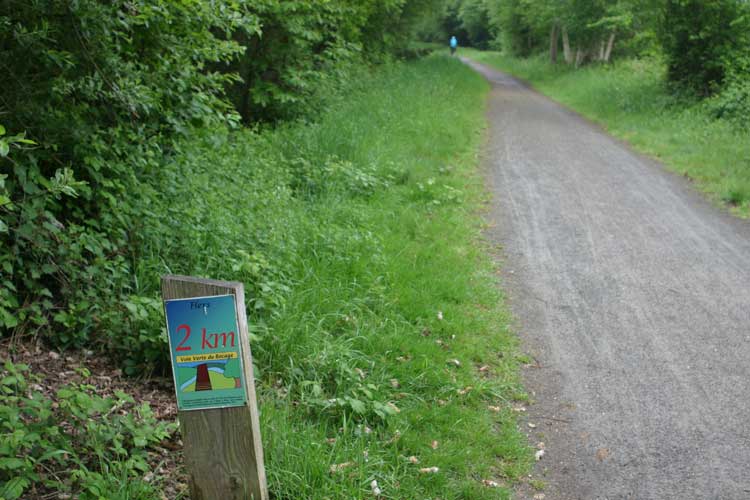 The only other traffic we saw had four legs. 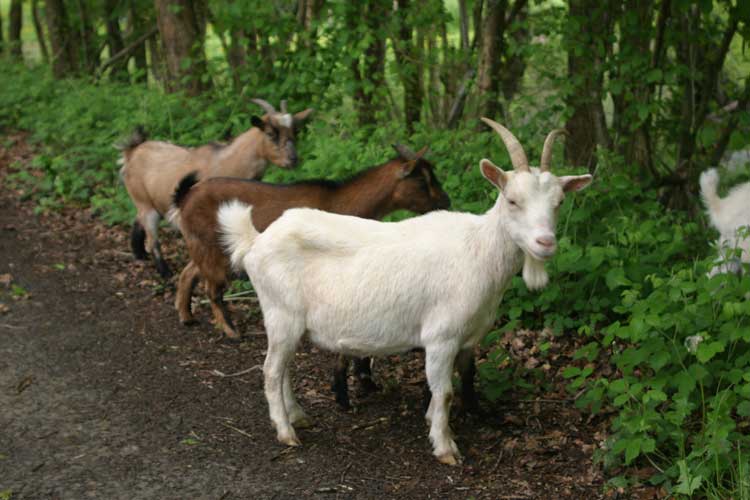 We scoffed down a croque-monsieur each and then shared another (just about all that was being served in Flers post-3pm). Then we kept heading north.

From Flers to Pont-d'Ouilly there are two possible La Velo Francette routes. They look like this on the official site: 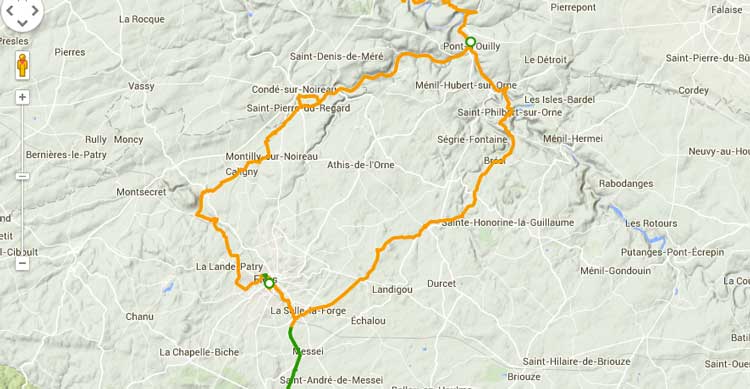 The left-hand route comes in at 33.5km (intermediate); the right-hand one is 30.6km (expert). Now there was no way Nicky was taking the right-hand 'expert' route and, with the clock ticking onto 4pm and rain and wind battering us, I could hardly blame her.

Though if we HAD taken the right-hand 'expert' route, we would have seen the stunning gorges of La Roche d’Oëtre. Here's what we missed (thanks to the wonders of Bernard Dupont and Flickr): 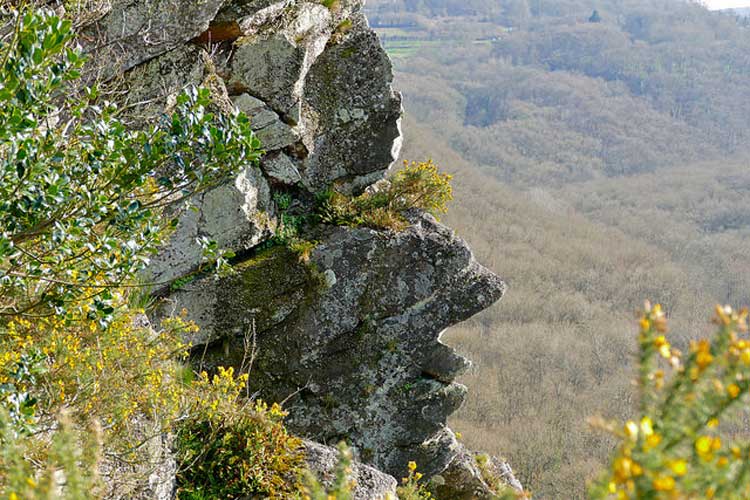 So that left us with the official 33.5km (intermediate) Francette itinerary or a taxi (which was Nicky's other suggestion). I say no and we compromised on a 22km zip down the middle on the D25 to guarantee arrival before dark and ahead of the next shower of rain (we could do nothing to avoid the wind). 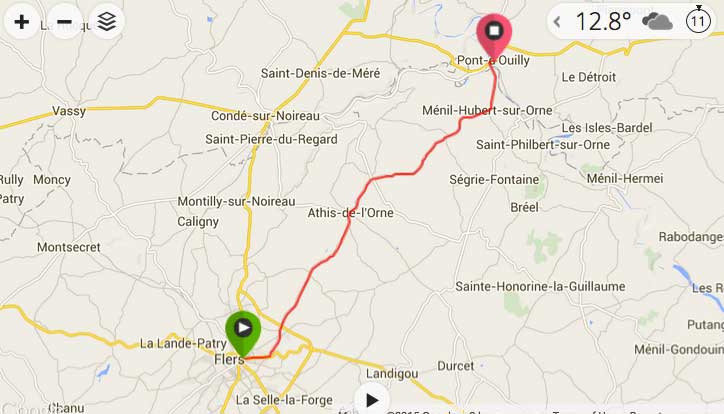 At the time of writing, none of La Velo Francette's route today (May 2015) was officially signposted. While it was hard to get lost on the Domfront-Flers voie verte, decent, local IGN/Michelin maps (or detailed notes from the official site or GPS) are needed for the route after Flers (as indeed they were after the end of the Mayenne voie verte yesterday).

The tourism information office at Flers was particularly vague about the quality of the 'expert' route via La Roche d’Oëtre and the map she produced used the same colour for the voie vertes and shared sections (and the La Roche d’Oëtre section was dotted for a still-unknown reason). I'm told the signage will be in place by the end of June 2015, but plan ahead with maps and research just in case.

And so we are on the cusp of our final day on the road, the final push into Caen.

Follow out journey on La Velo Francette on the blog.