Adrian Brown rode the Ardèchoise Cyclosportive in 2016. His one-woman support team, his wife Jacqui, sent us this report from the road side. 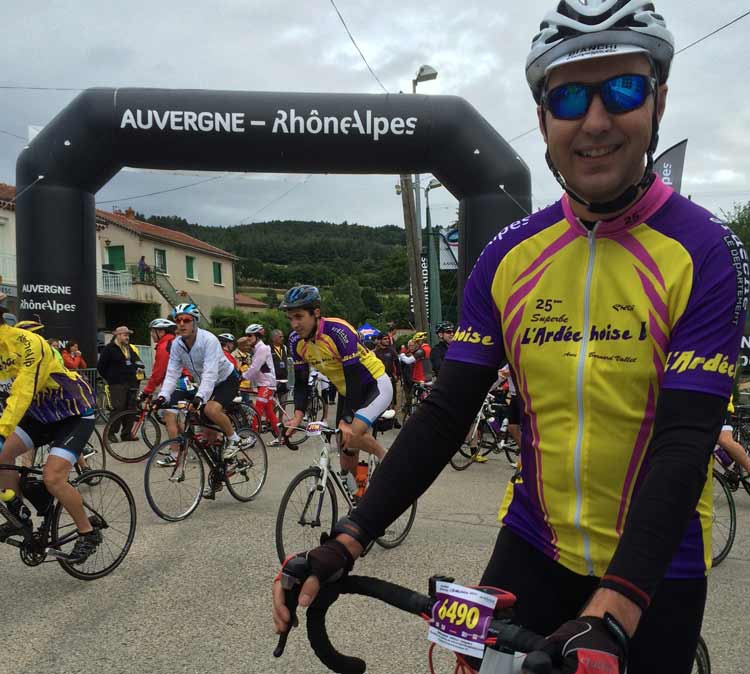 Cycling in the Ardèche – bike routes and GPX files

The Ardèchoise four-day cycling event, held in Saint-Félicien, a commune 100km south og Lyon in the Ardèche department. The Ardèchoise has been going now for 25 years – and it's obvious they have worked hard over the years to make it something very special. From four cycling friends in 1988 to over 16,000 cyclists in 2016, it claims to have become the largest mass gathering of cyclists in the world in the mountain route category, and we have certainly never experienced anything on this scale.

Several local villages around Saint-Félicien are proud to be a part of it too, decorating their villages and welcoming cyclists with refreshments and encouragement. It has become a real community event. 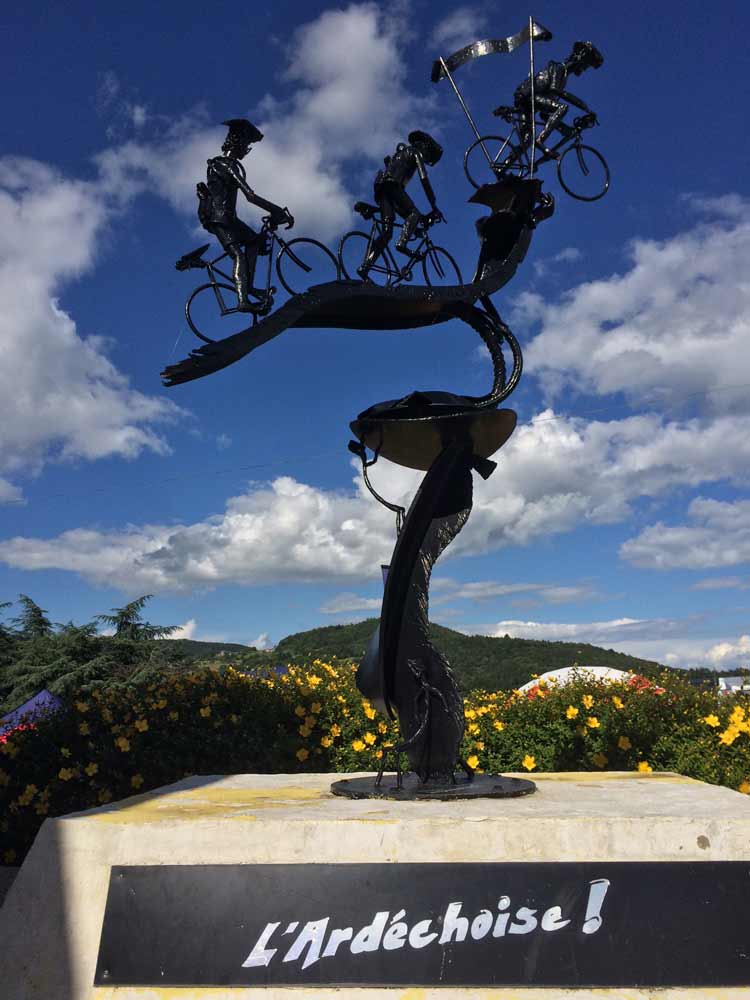 Our first experience of just how big it was came on the Friday afternoon when all those taking part in the one-day event on the Saturday are asked to collect their entry packs. It was a slow drive through the village as there were lots of people arriving, but the signs to the short stay car park – set up for registration only – were easy to follow.

Here, we met the first of the event's many volunteers who ensure everything runs smoothly; we were directed straight to a free spot in the field/temporary car park. There was no shortage of volunteers on hand to help in the village, either, where the atmosphere was alive and the sun was out.

Registration only took a few minutes, thanks to yet more volunteers and a tried and tested system, but I guess when you are expecting over 8,000 people you need to know what you are doing.

On Saturday, we left Tournon-sur-Rhône with a beautiful sunrise colouring the sky; it looked promising for good weather. There was already a steady procession of cars winding its way up to Saint-Félicien, bikes on board and occupants wearing bright Lycra.

It was only 7am when we arrived, but already the car parks were filling up quickly. We were in no rush – Adrian, who was equally nervous and excited, was happy to leave towards the end of the main pack and we made sure we had time for a coffee together before he set off.

There was a shuttle bus from the car park up to the village, but the road was so busy with cyclists we decided to walk the four kilometres (uphill) together. This was good exercise for me and a useful warm up for Adrian's legs.

The number of people gathered in the village was more than I've seen in any one place in a long time, but with 8,200 cyclists setting off on one of six routes (85km, 125km, 176km, 220km, 234km and 278km – see here for more), many with one-woman support crews like me waving them off. There was also a huge team of volunteers.

I joined Adrian for the long walk to the start, bunched together with everyone else with a run number from 4,701 to 15,000, although I felt a little out of place with no bike. 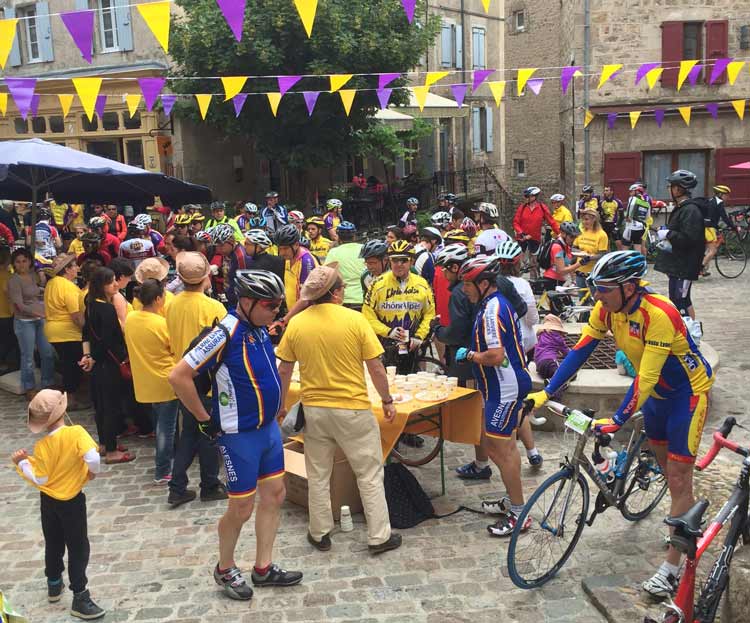 He generously shared the chocolate brioche handed out just before the start line, but he was soon off, hoping to complete the 85km course in about four hours (and leaving me with plenty of time to soak up the atmosphere in the village). Watching the team of worker bee volunteers keeping on top of all their tasks, including toilet cleaning, loo roll restocking (using a forklift) and sorting the rubbish was strangely fascinating. There were also trade stands to browse and live music to listen to. The atmosphere was buzzing and I can't believe how well organised it was.

Saint-Félicien has a population of about 1,300 people, so to host an event with over 16,000 participants and 8,000 volunteers over four days is nothing short of amazing.

I received regular update messages from Adrian each time he stopped at one of the many refreshment villages, and at every update he was more enthusiastic about what a great time he was having.

After 85km and three hours 45 minutees, he returned hot, happy and not as exhausted as either of us expected him to be. We parked his bike in the massive, secure bike park and went off to enjoy the meal that's included in the entry price. 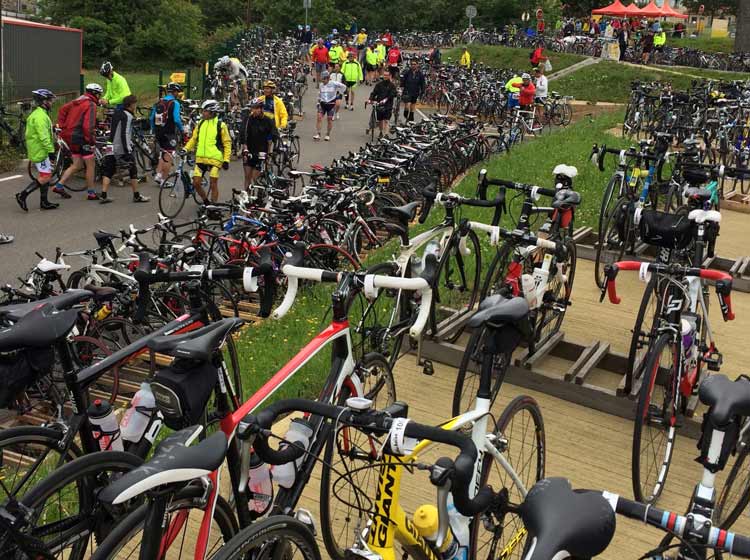 As an observer, I would say there was something for everyone. I saw people of all ages, bikes of all shapes and sizes, including some with batteries and even saw a local celebrity, a man of 104 who attends every year. There are also VIP tickets available where you arrive by helicopter and get an exclusive dining marquee. So long as you are over 14 and can ride a bike, you can join in.

While waiting for Adrian, I came up with five questions to ask him about his day and here's what he had to say.

1. This is the biggest organised ride you've taken part in – it is what you expected?

No! It was far better. The organisation was great, which I expected, but the total involvement of all the villages we cycled through was way beyond expectations. I was also surprised at how well I coped. We live in a very flat area and this sort of climbing was a first for me and I really quite enjoyed it.

2. Once you left the village, what was the orgnisation like?

Very good. It was like being part of a professional race, we had Mavic mechanical assistance, motorcycle journalists and lots of volunteers at the food stops. I've got nothing to complain about. 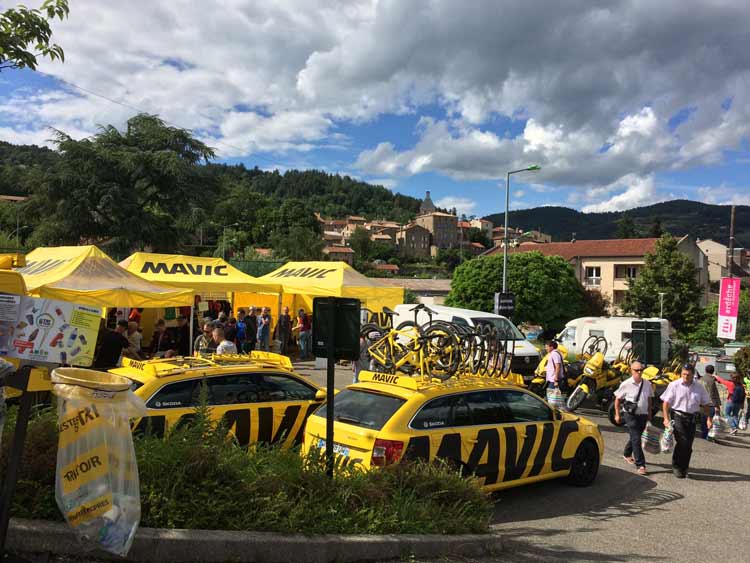 3. Which was the best food stop?

Impossible to choose between the thick slices of local saucisson at the first stop and the mountain cheese handed out by the children in the medieval village of Désaignes.

4. Was there a good atmosphere out on the course?

Yes, everyone was prepared to talk to those around them and that made it a very social event. Even those who arrived alone, like me, were not alone when climbing hills and even the muscle-legged and professional looking cyclists weren't intimidating and were happy to help others.

Oh God yes! When you come from flat Poitou-Charentes, the exhilaration of speeding downhill at over 60 km/hour for kilometre after kilometre is a big thrill!

We have more details here on the Ardèchoise sportive.